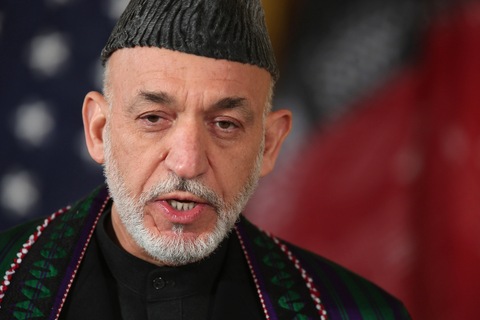 WASHINGTON — New discord surfaced between the U.S. and Afghan President Hamid Karzai on Thursday, with Karzai saying he would prefer his successor sign a new security pact with the United States, and Washington saying that no signatures by the end of 2013 could be a deal breaker.

Secretary of State John Kerry and Karzai agreed this week to language of a proposed bilateral security agreement that could allow thousands of U.S. troops to remain in Afghanistan as trainers and advisers after 2014 when the NATO-led combat mission ends.

But then, just as about 2,500 tribal elders from around Afghanistan assembled in Kabul to consider the document, Karzai said he wanted it to be signed by the next president, who won’t be elected until April at the earliest. That could make the draft document a political football in the Afghan presidential election and complicate U.S. efforts to prepare for a residual force to battle terrorists and train, equip and assist Afghan forces beyond 2014.
It’s unclear why Karzai said he would rather his successor to sign any deal, which has been the focus of nearly a year of negotiations fraught with frequent ups and downs and pauses. James Dobbins, the U.S. special representative for Afghanistan and Pakistan, said U.S. officials are trying to get Karzai to change his mind.

“I think delaying the signing to April will make it much more difficult for us to make our commitments,” Dobbins told “PBS NewsHour.”

“It’ll make it more difficult – and make it virtually impossible for other countries to make their commitments. I think it’ll have a long-term, deleterious impact on the scale of international assistance to Afghanistan,” he said.

Asked if the U.S. was trying to get Karzai to reconsider, Dobbins replied: “Absolutely. And besides that, it’s a two-round election and it’s not necessarily over in April. It could well extend several months beyond that because if the first round doesn’t produce a clear winner, there’ll be a second round.”

Afghan experts in the U.S. suggested that Karzai might be trying to pressure the U.S. into making more concessions. His move also could be his attempt to avoid taking personal responsibility for an agreement that Afghans might see as selling out to foreign interests. Karzai hinted that asking for the deferral could be personal – that neither he nor the U.S. trust each other and that it would be better if someone else put pen to paper.

“It all turns to trust, and between me and America, there is not very good trust,” Karzai told the elders on Thursday. “I don’t trust them and they don’t trust me. The last 10 years has shown this to me. I have had fights with them and they have had propaganda against me.”

Whatever the reason, the Obama administration pushed back. Defense Secretary Chuck Hagel told reporters on his plane flying to Halifax that Karzai’s move “puts the United States in a very, very difficult position.”

“Until we get that BSA (bilateral security agreement), we can’t do any more than train and it really needs to be done by the end of this year,” Hagel told reporters.

The agreement is set to remain in force until the end of 2024 and beyond, unless terminated by mutual agreement or by either party with two years’ written notice. The agreement was designed to give some U.S. forces the legal right to remain in the country after the NATO-led mission concludes in December 2014, and to pledge U.S. backing for Afghanistan and its security forces for many years to come.

Karzai or his designee would sign the document and then the parliament would ratify it, according to the State Department. After ratification, the Afghan president would have to again sign the agreement to make it law. That is something Karzai might or might not choose to do even if the gathering of elders, known as a Loya Jirga, embraced it and the parliament ratified it.

Stephen Biddle, a professor of international affairs at George Washington University who has advised U.S. commanders in Afghanistan, said Karzai might be trying to gain leverage in negotiations.

“If the deal isn’t done, then you can always renegotiate the terms and get something better,” Biddle said. “If the hypothesis is right that he’s trying to keep the deal open as long as possible in hopes of getting better terms, then he’s not necessarily in sales mode with the jirga. His leverage is higher if he’s got some possibility that the deal might explode.”

The ongoing debate over the agreement is testing the patience of some U.S. lawmakers. Rep. Eliot Engel, the top Democrat on the House Foreign Affairs Committee, said: “This latest stunt is fraying the nerves of many in Congress. Further delaying the BSA puts into question Karzai’s intentions and seriousness about forging a strong post-2014 partnership with the U.S.”