USAID Official Responds to Criticism of Money Spent in Afghanistan 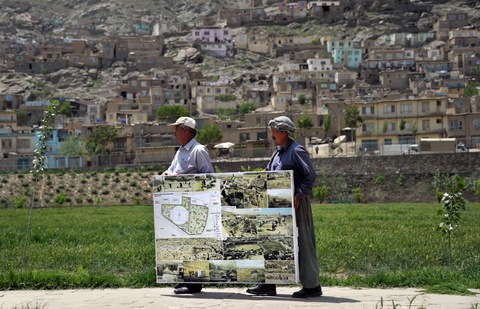 Afghan workers carry a montage of photographs through a renovated park in Kabul on May 10, 2012. Photo by Bay Ismoyo/AFP/Getty Images.

An international donors’ conference in Tokyo over the weekend highlighted the continued demands on Afghanistan to end corruption in the government and more carefully oversee how funding is disbursed.

More than 70 countries pledged $16 billion in aid over four years. In exchange, the Afghan government pledged to crack down on corruption. The efforts are part of preparing Afghanistan for when the bulk of U.S. and NATO troops leave in 2014.
Since 2001, the United States has spent more than $19 billion to help Afghanistan develop its economy, such as building roads, schools and hospitals, and teaching farmers new planting techniques.

The process came under fire in a book by journalist Rajiv Chandrasekaran, called “Little America: The War Within the War for Afghanistan”. He was interviewed on the NewsHour broadcast and website last month.

“When it comes to reconstruction dollars, instead of focusing on sustainable projects that the Afghans could one day take ownership of, we essentially carpet-bombed the country with money,” he said. “In 2010, we tried to spend $4 billion worth of reconstruction money in Afghanistan. In some places, that equated to more than the annual per capita income. And so it distorted the local economy. It built dependency, and it created sort of the development version of a sugar high. We pumped them up with lots of goodies, only to then see it crash later as budgets would inevitably have to be cut.”

On Wednesday, NewsHour senior correspondent Ray Suarez spoke with Alex Thier, the top official responsible for civilian aid and economic development in Afghanistan and Pakistan at the U.S. Agency for International Development.

Thier disputed Chandrasekaran’s assertion that the way the U.S. government measured progress was by how much money was spent, rather than looking at effects on the ground.

Thier stressed that it was important for U.S. officials working in Afghanistan to develop working relationships with their Afghan staffs and counterparts. USAID developed a program to return willing officials to Afghanistan to build on their existing connections and understanding of the culture.

Despite the accomplishments in Afghanistan, Thier said the two biggest challenges are insecurity and lack of rule of law. “Societies develop rule of law over generations, and so we are investing in parliament, in the courts, in an independent prosecutor’s office, and slowly you begin to see that these things are taking off and are having an impact,” he said.