Catholic bishops scrapped their initial welcome of homosexuals into the church, a measure sought by Pope Francis, as their two-week synod in Vatican City concluded Saturday. 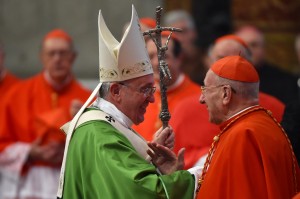 The bishops failed to approve even a watered-down version ministering to gays in the church, the Associated Press reported.

Instead, the revised version of the document referred to homosexuality as one of the problems Catholic families have to confront.

The document had also stated “people with homosexual tendencies must be welcomed with respect and delicacy,” with reiteration of church teaching that marriage is only between man and woman, the AP reported.

The paragraph failed to get the two-thirds majority vote needed to pass, the AP reported.

A conservative bishop vowed the change in language of the original document was due to confusion among the faithful and threatened to undermine the traditional family, Reuters reported.

JOHN ALLEN: What it is not is a change in Catholic teaching on marriage. The bishops at this gathering, which is called a synod, have made it abundantly clear there is not going to be any change in Catholic doctrine, which is that marriage is a relationship between a man and woman that is permanent and it’s open to life.