Vladimir Putin sworn in for fourth term as Russian president

MOSCOW — Vladimir Putin took the oath of office Monday for his fourth term as Russian president, promising to pursue an economic agenda that would boost living standards across the country.

In a ceremony in an ornate Kremlin hall in Moscow, Putin said improving Russia’s economy following a recession partly linked to international sanctions would be a primary goal of his next six-year term.

“Now, we must use all existing possibilities, first of all for resolving internal urgent tasks of development, for economic and technological breakthroughs, for raising competitiveness in those spheres that determine the future,” he told thousands of guests standing in the elaborate Andreevsky Hall of the Grand Kremlin Palace and two adjacent halls.

Although Putin has restored Russia’s prominence on the world stage through military actions — including intervening in Syria’s war to help President Bashar Assad — he has been criticized for inadequate efforts to diversify Russia’s economy away from its dependence on oil and gas exports or develop the country’s manufacturing sector.

“Russia should be modern and dynamic, it should be ready to accept the call of the times,” he said.

In his speech, he made only brief reference to Russia’s international role, saying “Russia is a strong, active, influential participant in international life. The security and defense capability of the country is reliably ensured. We will give these matters the necessary constant attention.”

He acknowledged that the challenges facing Russia were formidable “but we all remember well that, for more than a thousand years of history, Russia has often faced epochs of turmoil and trials, and has always revived as a Phoenix, reached heights that others could not.” 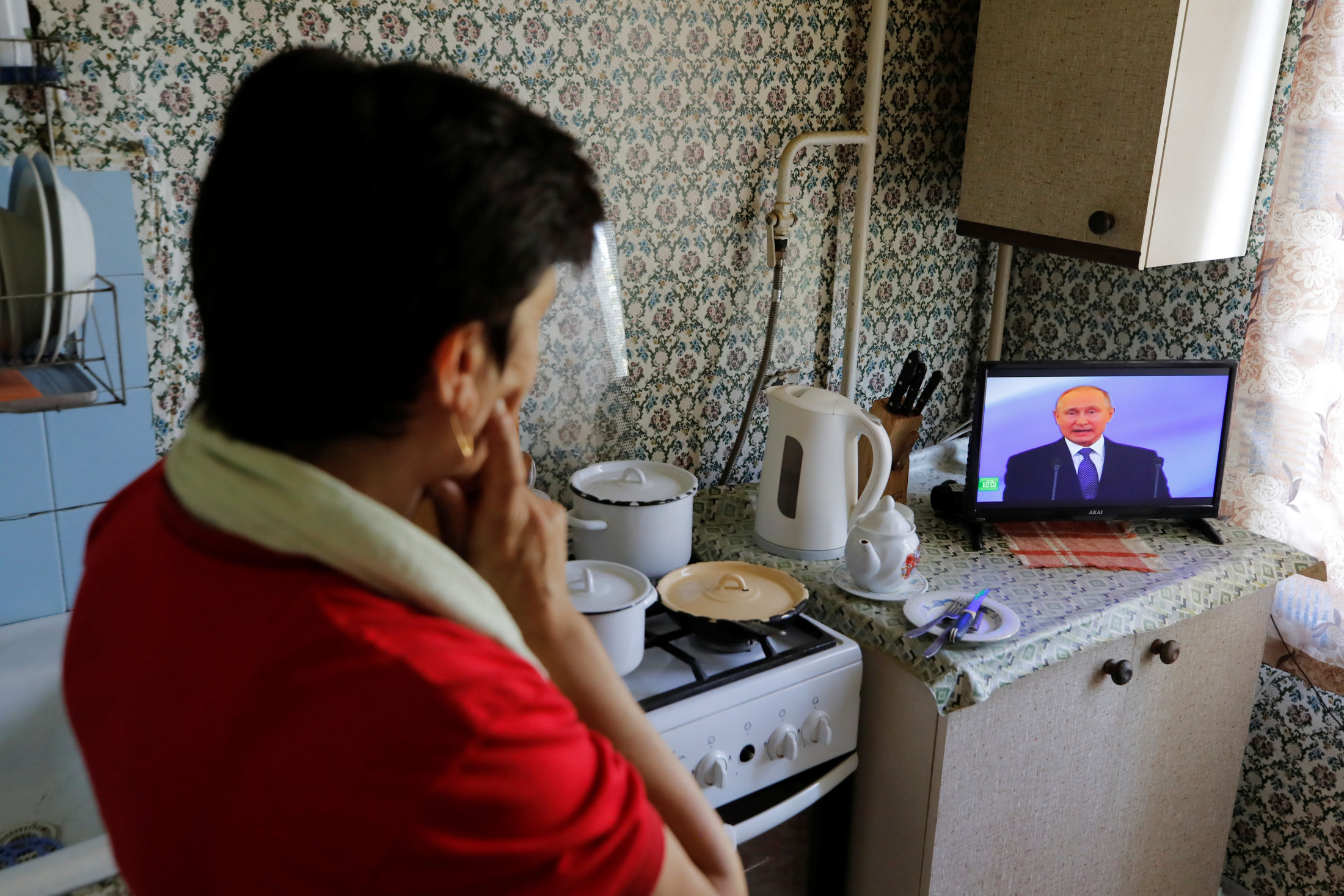 A woman watches a ceremony to inaugurate Vladimir Putin as President of Russia while cooking a meal inside an apartment in Moscow, Russia. Photo by Maxim Shemetov/Reuters

Putin held onto the presidency in March’s election when he tallied 77 percent of the vote.

Putin has effectively been the leader of Russia for all of the 21st century. He stepped down from the presidency in 2008 because of term limits, but was named prime minister and continued to steer the country until he returned as president in 2012.

He became acting president on New Year’s Eve 1999 following the surprise resignation of Boris Yeltsin and was elected to his first four-year term in 2000.

The ceremony Monday was covered in assiduous detail on state television. It showed Putin working at his desk in his shirt sleeves, then donning a suit coat to begin a long walk through the corridors of the Kremlin’s Senate building, then boarding a limousine for a short drive to the Grand Kremlin Palace.

Schroeder stood with Prime Minister Dmitry Medvedev and Putin prominently shook hands with him after the speech.

Soon after the ceremony, Putin issued an order formally dissolving the Cabinet but nominated Medvedev to serve again as prime minister. The lower house of parliament is to vote on whether to approve him on Tuesday.

It was not clear when other ministerial posts would be decided or if significant ministers might be replaced.

READ MORE: After a week of Russian propaganda, I was questioning everything

Left: Russian President Vladimir Putin walks before an inauguration ceremony at the Kremlin in Moscow. Photo by Alexander Zemlianichenko/Pool via Reuters

James Comey: FBI had ‘basis for investigating’ possible ties between Trump and Russia