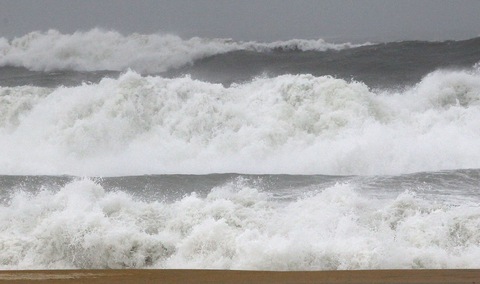 5:00 p.m. ET Irene has been pushing northward up the Eastern Seaboard at 13 mph, with maximum sustained winds still near 85 mph and higher gusts. The storm has been linked to the deaths of at least four people since it came to shore, including an 11-year-old boy in Newport News, Virginia, who died when a tree fell on an apartment building.

The storm is forecast to remain at or near hurricane strength as it moves across the mid-Atlantic states and over Southern New England on Sunday, the National Weather Service reports. More than half a million homes are reported to be without power, and President Obama has signed emergency declarations for North Carolina, New York, Virginia, Maryland, New Jersey, Connecticut, New Hampshire, Rhode Island, and Massachusetts.

And you can follow the hurricane’s path as it moves along the coastline in this Google map: 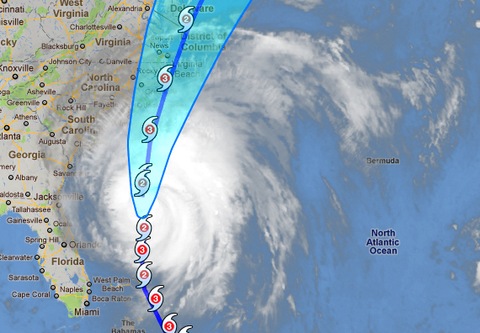 12:45 p.m. ET By noon, about 438,000 residents were without power in North Carolina and Virginia, and winds and rain were picking up in the Washington, D.C. area, and in beaches stretching from Virginia to Delaware. Two deaths, both in North Carolina, have been blamed on the storm, CNN reports.

The storm has delivered maximum sustained winds of 85 mph, according to the National Hurricane Center. And hurricane-force wind gusts and a damaging storm surge will continue for the next several hours, weather forecasters predict.

From Bill Deger, a meteorologist from Accuweather:

Rainfall of 6 to 9 inches has already occurred in eastern North Carolina. Power outages have begun to affect data collection in North Carolina and southeastern Virginia.

Tropical storm-force winds have begun in southeastern Virginia. Rain from Irene was on the doorstep in New York City, Philadelphia and Washington/Baltimore.

FEMA has issued the following safety tips for weathering the storm at home:

Hurricane Irene battered the North Carolina coast near Cape Lookout Saturday morning as a Category 1 storm, lashing the coast with powerful wind gusts, pounding waves and flooding, and taking down a pier at Atlantic Beach.

The storm has weakened from its earlier Category 3 rating, but still carried fierce 85 mph winds and heavy rains, and picked up strength in North Carolina throughout the morning, according to the National Hurricane Center.

“The time to leave is right now,” he said. “We just won’t have the resources to get everyone in the evacuation zone out after the storrm hits.”

There is a mandatory evacuation order for New Yorkers in low-lying areas. It’s conceivable that there will be no electricity in downtown Manhattan and a lot of water in the streets, he added. “Here what we’re expecting is a tidal surge that comes up with a storm surge on top of it,” he said. “This is a life threatening storm for people here.”

Meanwhile, coastal and inland areas along the Eastern seaboard as far North as Maine braced for the storm’s arrival this weekend. Rain had already started in the lower parts of Chesapeake Bay and the Delaware beaches by Saturday morning. And tropical-force winds will sweep a large section of the coast, extending outward 250 miles.