On July 22, 2014, Rezaian was arrested in Tehran and accused of spying, which the Washington Post maintains is groundless. Rezaian was convicted in October of this year and sentenced in November to a prison term, but the specifics of his sentencing remain unclear.

Today, Ali Rezaian, the reporter’s brother, presented the United Nations with a petition containing more than 500,000 signatures requesting Rezaian’s freedom. The petition is directed to the Ayatollah Khamenei, the Supreme Leader of Iran. 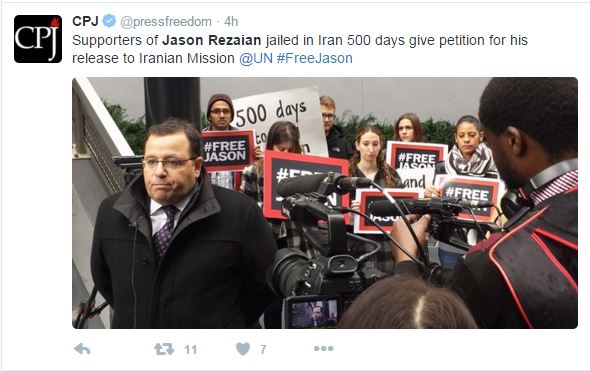 Across the nation and the globe, other institutions and individuals marked the milestone in their own ways. The National Press Club announced on Twitter that they will host a 24-hour reading of Rezaian’s work beginning on Friday morning to honor the reporter in Washington, D.C.

Noam Chomsky and other supporters published an open letter in The New York Review of Books expressing anger over the incarceration and requesting Rezaian be released.

Some took to social media to vent their feelings over the situation, with co-workers, other journalists, and political figures sharing that they were thinking of Rezaian, and requesting his release.

The Washington Post tweeted out a very simple message. “500 days,” it reads. “#FreeJason.”