Trump was in the U.K. on Monday for the first leg of a trip that will include commemorating the 75th anniversary of D-Day during a ceremony at the Normandy American Cemetery in France.

Trump didn’t mention his feud with London’s mayor or his comment about Prince Harry’s wife to a British tabloid. But on Twitter on Monday, he says the royal family has been “fantastic” and relations with the United Kingdom are “very strong.”

….Fake News will be working hard to find them. Great love all around. Also, big Trade Deal is possible once U.K. gets rid of the shackles. Already starting to talk!

Trump talked about “tremendous crowds of well wishers” and seeing no protests against him, though he’s largely been getting around by helicopter.

The agenda for Trump’s weeklong journey is mostly ceremonial: a state visit and an audience with Queen Elizabeth II in London, D-Day commemoration ceremonies on both sides of the English Channel and his first presidential visit to Ireland.

But Trump’s visit also comes at a fraught time in British politics, with Prime Minister Theresa May stepping down as leader of the Conservative Party on June 7 over the country’s Brexit turmoil. Lawmakers in Parliament have repeatedly rejected May’s Brexit divorce deal with the European Union.

Monday’s focus however was on elaborate ceremonies honoring the president. It began with Queen Elizabeth II holding a grand welcoming ceremony at Buckingham Palace, moved on to a formal tea with Prince Charles and ends with a sumptuous state banquet Monday night.

Trump and Melania were greeted on the grand lawn of Buckingham Palace by Queen Elizabeth II and inspected the Guard of Honor formed by the Grenadier Guards wearing the traditional bearskin hats.

Royal gun salutes were fired Monday from nearby Green Park and from the Tower of London as part of the pageantry accompanying an official state visit, one of the highest honors Britain can bestow on a foreign leaders.

The ceremony took place under clear blue skies on the spacious garden next to the 775-room palace that is the official residence of the queen.

Prince Charles, the heir to the throne, and his wife Camilla welcomed the Trumps as they walked down the steps of their helicopter.

The grave of The Unknown Warrior

The president and the first lady paid their respects at the grave of an unknown British warrior who is buried at Westminster Abbey.

Trump and Melania were greeted inside the abbey by Prince Andrew and clergy.

They stood silently at the tomb of the British soldier whose body was brought from France to be buried at the abbey in November 1920. The grave contains soil from France and is covered by a slab of black marble.

The president and first lady prayed and bent down to touch a colorful wreath, which had red and white roses and bright blue and pink flowers.

Earlier in the day, Queen Elizabeth II gave Donald and Melania Trump have a look at items in the Royal Collection, one of the largest collections of art and other objects in the world. 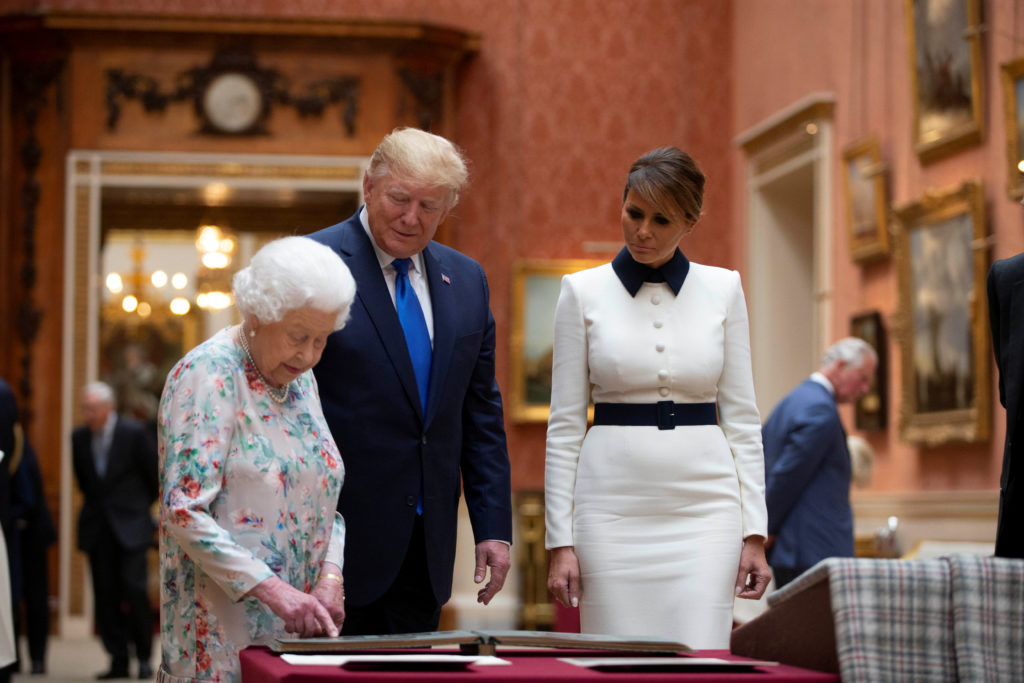 Some of the exhibits Trump is seeing in a pink gallery are items with a special historical significance to the United States.

One is labeled “A Tale of Two Georges: George III and George Washington.”

It includes a copy of the Declaration of Independence and a letter about the Constitution from Washington to John Jay, a founding father of the United States and the nation’s first chief justice. 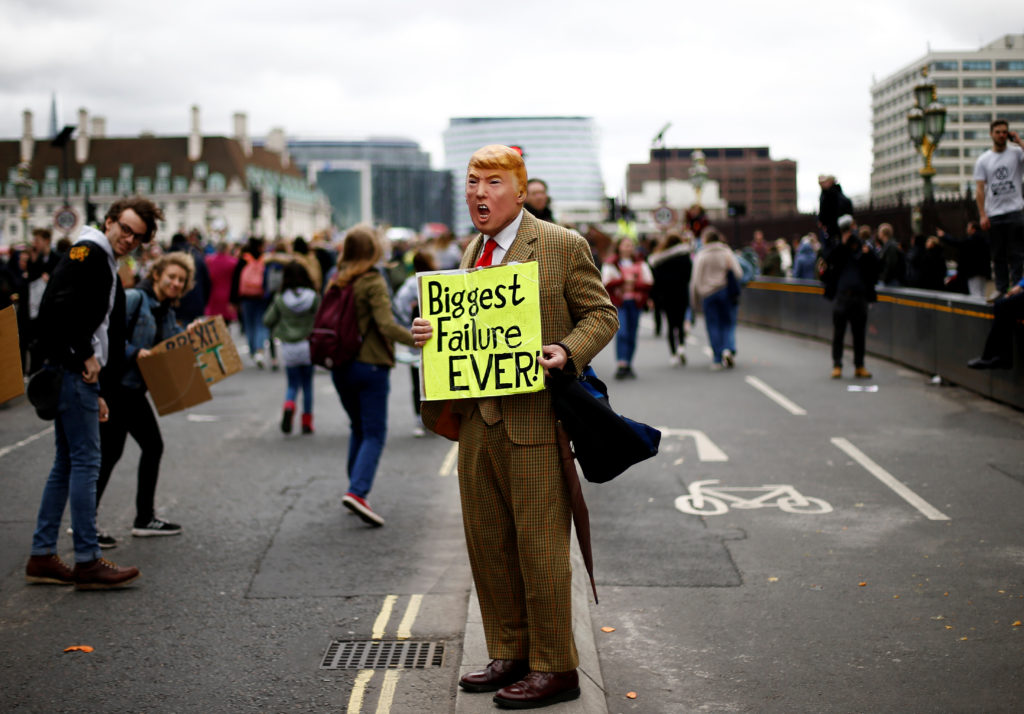 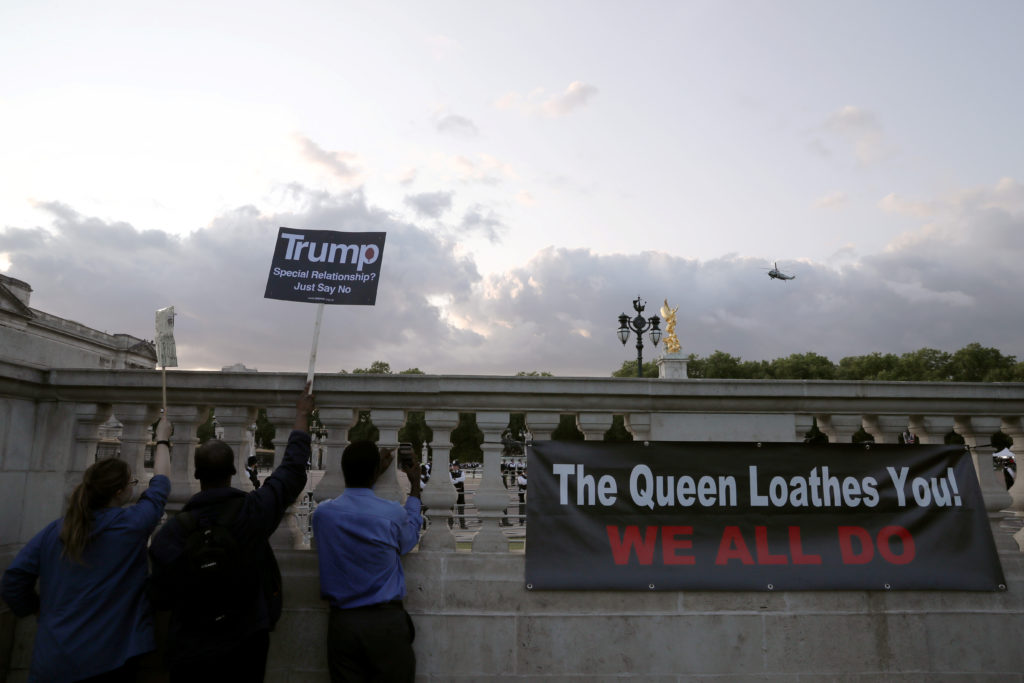 People protest as Marine One is seen outside Buckingham Palace during the state visit of U.S. President Donald Trump and First Lady Melania Trump to Britain, in London, June 3, 2019. Photo by Alkis Konstantinidis/Reuters 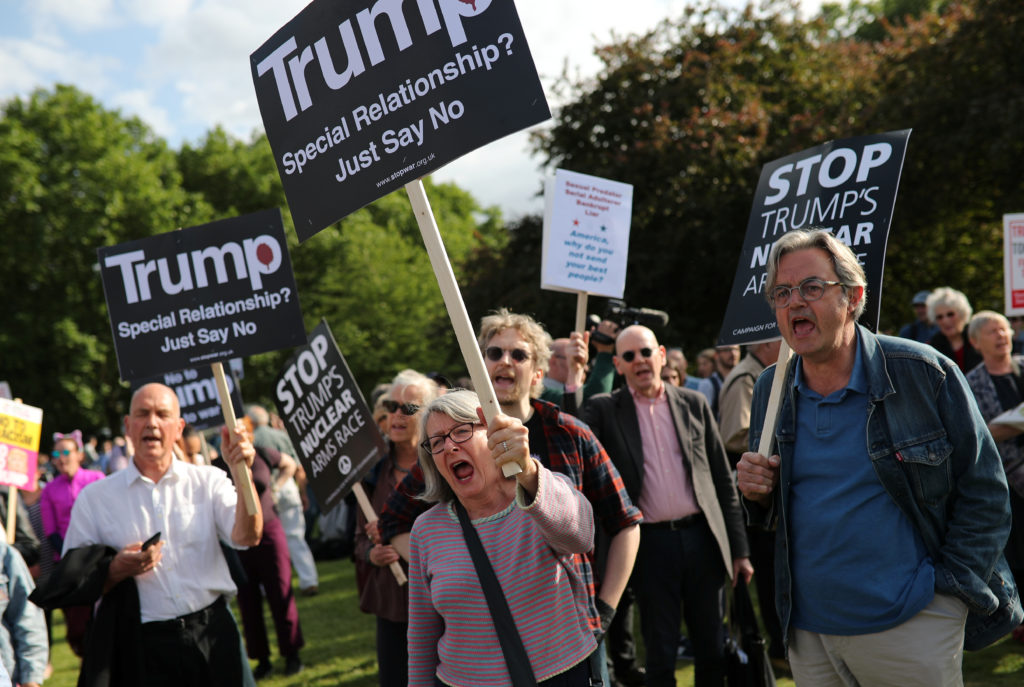 Corbyn, a lifelong socialist, earlier said he would not attend Monday’s state banquet for Trump at Buckingham Palace. He says May should not be rolling out the red carpet for a president who rips up vital international treaties, denies climate change and uses misogynist rhetoric.

May, a conservative, and several members of her Cabinet are to attend the dinner, hosted by Queen Elizabeth II.

The Associated Press wrote the text of this story. The PBS NewsHour produced the videos.