THE HAGUE, Netherlands — The head of the global chemical watchdog agency has rejected Russian claims that traces of a second nerve agent were discovered in the English city where former Russian spy Sergei Skripal and his daughter were poisoned.

Britain blames Russia for the attack, which it says was carried out by smearing a Soviet-developed nerve agent known as Novichok on a door handle at Sergei Skripal’s house in Salisbury. Moscow denies involvement.

Russian Foreign Minister Sergey Lavrov said Saturday that Moscow received confidential information from the laboratory in Spiez, Switzerland, that analyzed samples from the site of the March 4 poisoning in Salisbury.

He said the analysis — done at the request of the Organization for the Prohibition of Chemical Weapons — indicated that samples contained BZ nerve agent and its precursor. He said BZ was part of chemical arsenals of the U.S., Britain and other NATO countries, while the Soviet Union and Russia never developed the agent.

OPCW Director-General Ahmet Uzumcu told a meeting Wednesday of the organization’s Executive Council that a BZ precursor known as 3Q, “was contained in the control sample prepared by the OPCW Lab in accordance with the existing quality control procedures.”

He added “it has nothing to do with the samples collected by the OPCW team in Salisbury.”

Britain’s representative to the OPCW, Ambassador Peter Wilson, slammed the Russian foreign minister’s comments as a breach of the treaty outlawing chemical weapons.

“The thing for me that was particularly alarming about Lavrov’s statement is, first of all, the OPCW goes to enormous lengths to make sure that the identity of laboratories is confidential and, second of all, either the Russians are hacking the laboratories or they are making stuff up,” he said. “Either way, that is a violation of the confidentiality of the Chemical Weapons Convention.” 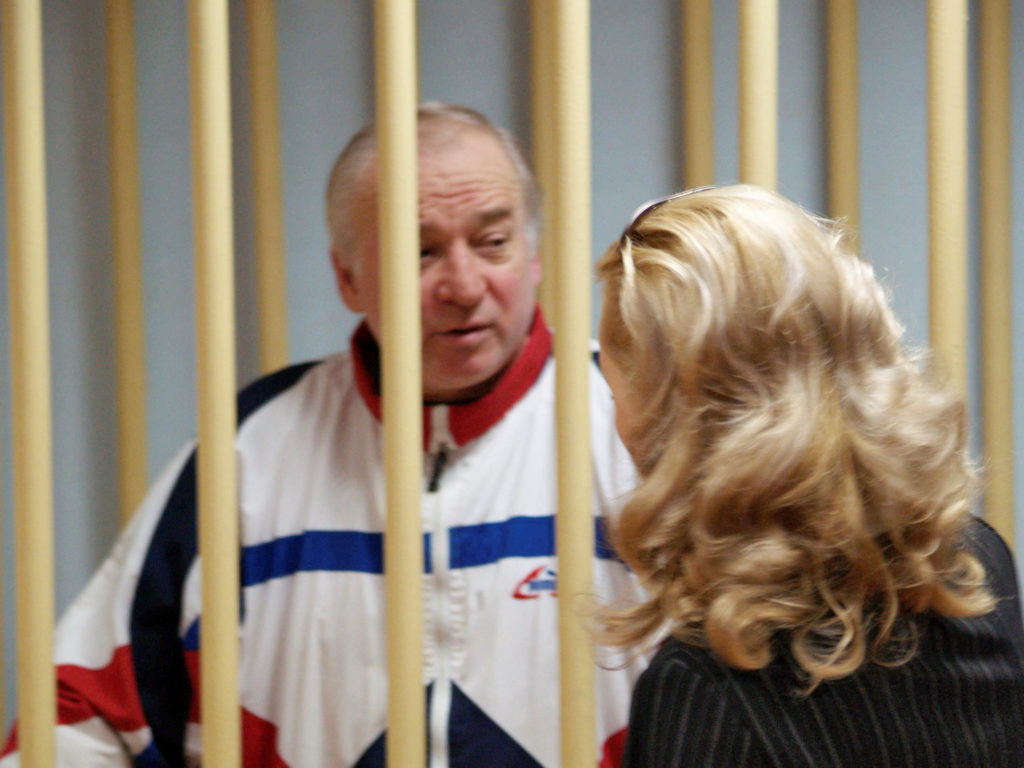 Sergei Skripal, a former colonel of Russia’s GRU military intelligence service, looks on inside the defendants’ cage as he attends a 2006 hearing at the Moscow military district court. File photo by Kommersant/Yuri Senatorov via Reuters

In a summary of its report last week, the OPCW did not name Novichok as the nerve agent used but it confirmed “the findings of the United Kingdom relating to the identity of the toxic chemical that was used in Salisbury.”

Wilson told reporters the OPCW “confirmed that they found what we found, and that is a Novichok.”

Wilson told the meeting that London continues to believe evidence points to Russian involvement in the attempted assassination.

‘We believe that only Russia had the technical means, operational experience and motive to target the Skripals,” Wilson said.

Wilson warned the Chemical Weapons Convention was being undermined by a growing use of nerve agents and other poisons, mentioning the 2017 assassination in Malaysia of North Korean leader Kim Jong Un’s estranged half brother, in addition to the Salisbury attack and the use of poison gas in Syria and Iraq.

“It is being continually violated,” Wilson told reporters.

He said the convention would be strengthened if all nations fully declared any stockpiles they still have. Member states are supposed to declare all their chemical weapons stocks upon joining the OPCW and destroy them.

The OPCW and Russia last year celebrated the destruction of the country’s final declared stocks.

“Russia clearly has chemical weapons they are not declaring and they need to do that,” Wilson said.

Left: SALISBURY, ENGLAND - MARCH 08: Forensic police officers wearing hazmat suits examine a vehicle believed to belong to Sergei Skripal on March 8, 2018 in Salisbury, England. Police investigations continue into the use of a nerve agent to poison Sergei Skripal, who was found ill in a Salisbury park with his daughter on March 4. Both Sergei Skripal and his daughter remain in critical condition in hospital. Sergei Skripal was granted refuge in the UK following a spy swap between the US and Russia in 2010. (Photo by Rufus Cox/Getty Images)