‘We are not letting down our guard.’ COVID-19 is another challenge for U.N. peacekeepers

Amid the COVID-19 pandemic that according to the World Health Organization has killed more than 900,000 people globally, United Nations peacekeepers are still deploying around the world. One of those missions is currently ongoing in Cyprus, due to a conflict that started decades ago.

Having long been ruled by the British, a 1960 constitution established independence and power-sharing between the Greek Cypriots and Turkish Cypriots, but in-fighting began shortly after. U.N. peacekeepers first arrived in 1964, but then Turkey tried to seize control over Cyprus on July 20, 1974. A cease-fire was announced the next month, but not before Turkey had captured 37 percent of the island. Part of that land soon became a demilitarized “buffer zone,” or a so-called “green line” that was established by the United Nations and is still patrolled by U.N. peacekeeping forces — now one of their longest-running missions. The green line, which spans nearly 133 square miles, cuts through the island’s capital of Nicosia.

Following the fall of the Berlin Wall, the buffer zone is the last physical dividing wall that cuts through the center of a populated city in Europe. And currently, neither side — Turkish forces or the Republic of Cyprus — is engaging in any discussions, diplomatic or otherwise.

The new coronavirus has added another layer of complication for the nearly 900 U.N. peacekeepers serving there as of June 2020, a mission with many hotly contested, moving parts.

The British U.N. peacekeepers work a ‘teams within teams’ philosophy. Individual fire teams of four, the smallest organizational group within the British Army, live, work and patrol together. This means that, if one member of the team of four were to contract COVID-19, it would only lead to the other three being isolated, rather than the entire section of eight, or the platoon of 24. They have also mandated mask use on U.N. helicopter flights and ground transportation. 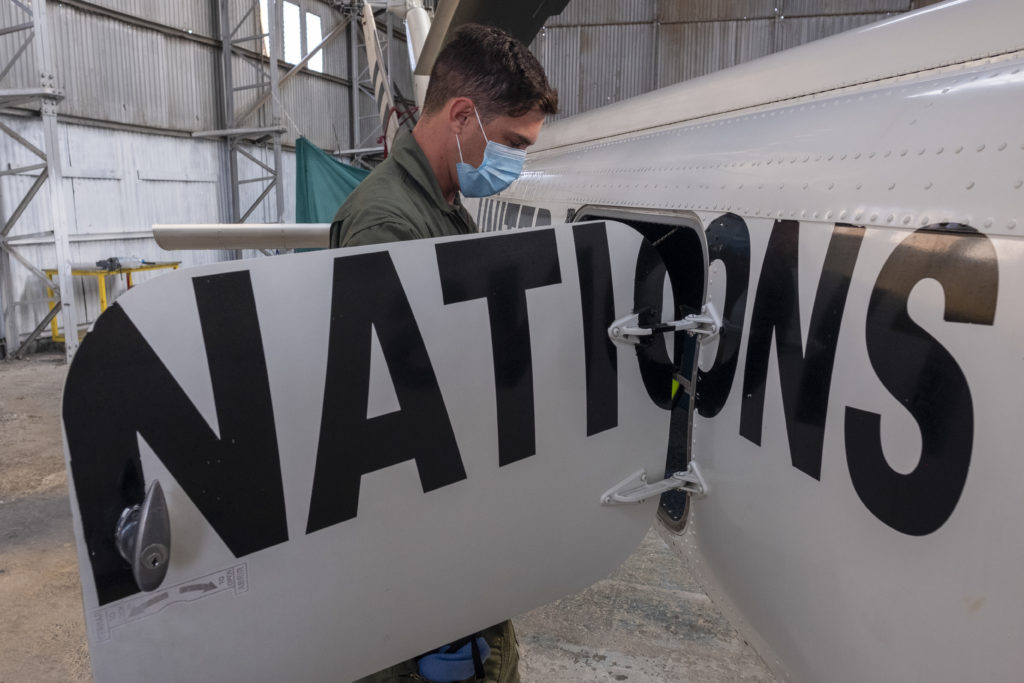 Argentine U.N. peacekeeper pilots and ground crew rigorously disinfect their helicopters before and after every flight.

Social distancing measures have also been implemented in dining and office settings.

The Argentine Air Force, which carries out observation helicopter flights inside the “buffer zone,” are just as meticulous with their COVID-19 precautions. Every aircraft pre- and post-flight is disinfected.

Photojournalist Sebastian Rich spent a week with Argentine and British force members on the green line, capturing how they are doing their job in the time of COVID-19. 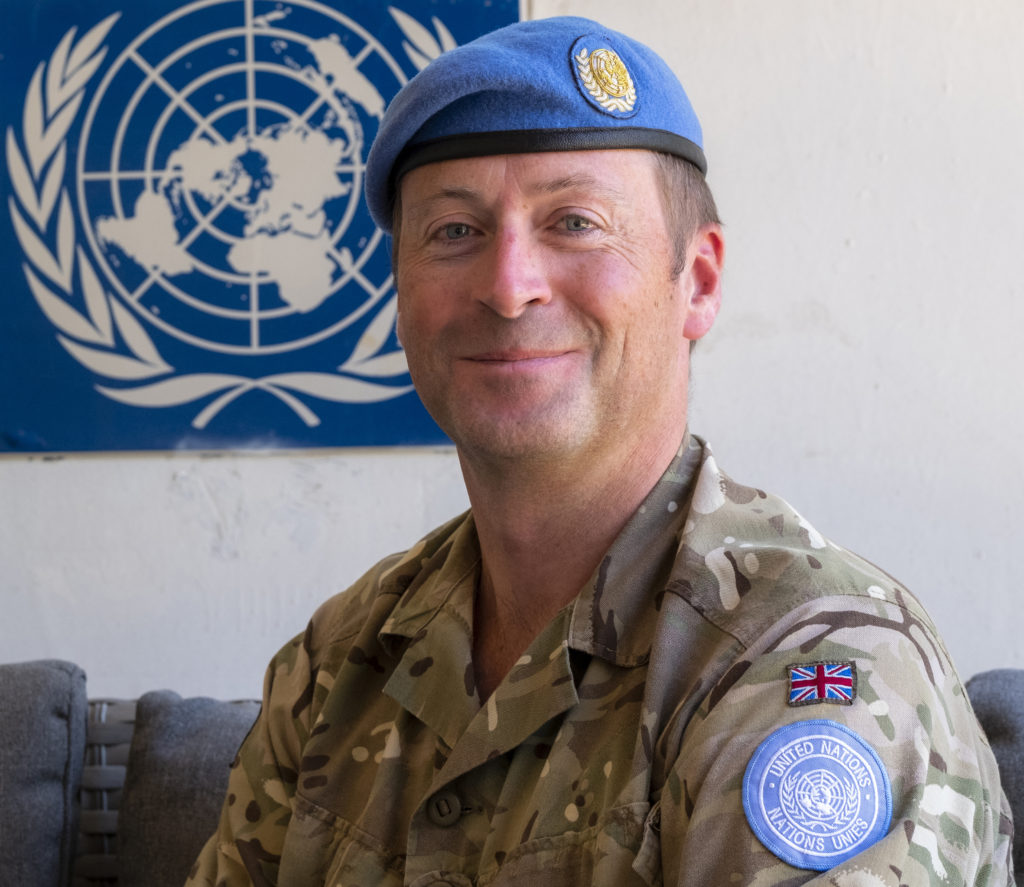 “COVID-19 has given us plenty of cause for introspection, thought, and some really hasty planning. This has turned out to be a very different tour than the one we were expecting. On first arrival, we had to spend 14 days in quarantine, making a handover from the previous regiment a challenge.

In the 22 years I have been in service, this situation is definitely unique and unprecedented. We look at the bright side of any situation, crack on and make the best of it– that’s exactly what we did. We got on with the important job of monitoring the buffer zone, ensuring its security and integrity.” 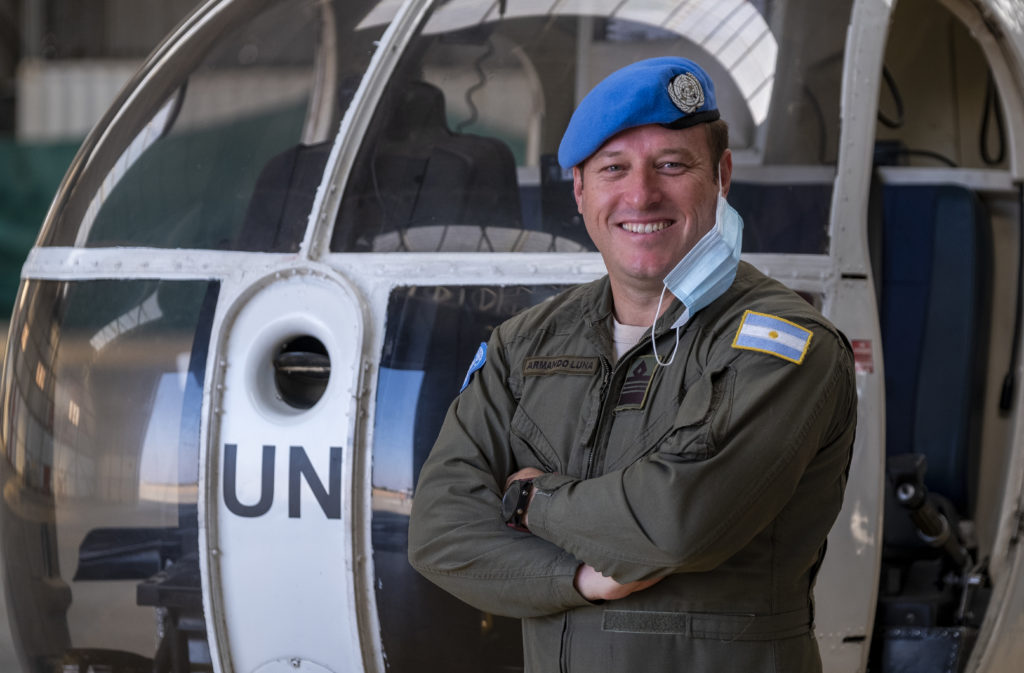 “This is a really interesting mission for us here and a great honor to be part of keeping the peace here in Cyprus. Every day and night, we have reconnaissance flights in the buffer zone. COVID -19 was a big challenge for us at first — we have not stopped flying since the beginning of this pandemic.

At first, instead of having observers from other sections in the aircraft to avoid contamination, we had to add that observing skill set to our pilots adding an extra workload on our pilots. But now, we are flying with observers once again from other sectors so our pilots and crew have to wear masks in flight.

In all aspects of our mission here, we have succeeded in keeping COVID-19 away from all our pilots, crew and passengers from other sectors. We have not had one single case of COVID-19 since the pandemic started, but I can assure you we are not letting down our guard, we are always and will continue to be vigilant.” 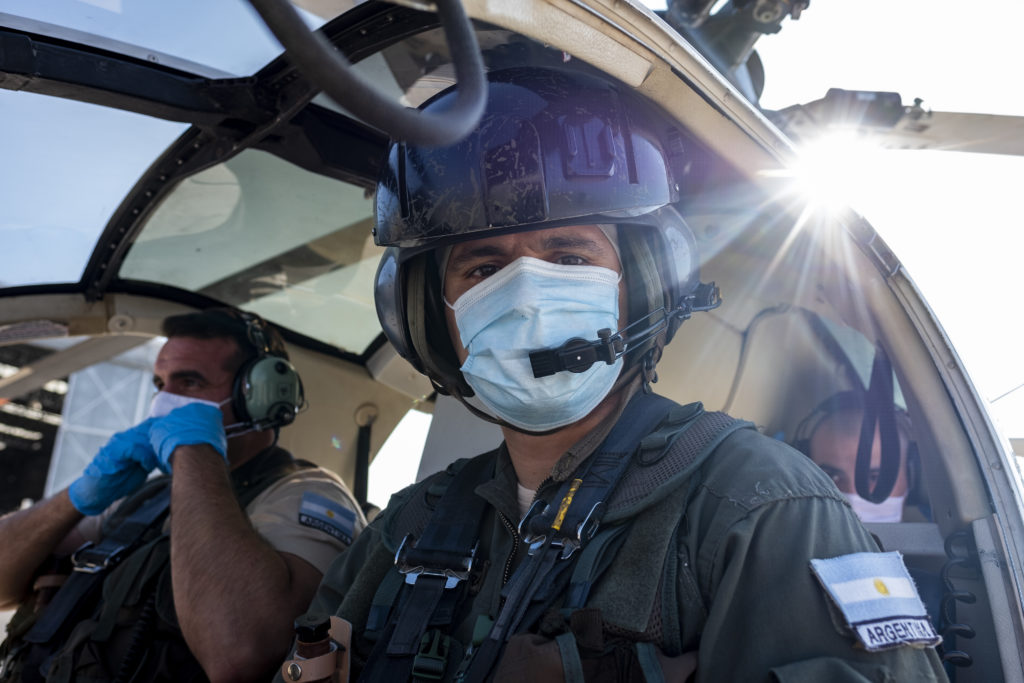 “We fly without doors — that creates a lot of interference with wind, so the added mask with a microphone makes communication hard. The observers in the back inform us what they want, so it gets complicated over the comms system. We have now got used to breathing and communicating with masks while flying.” 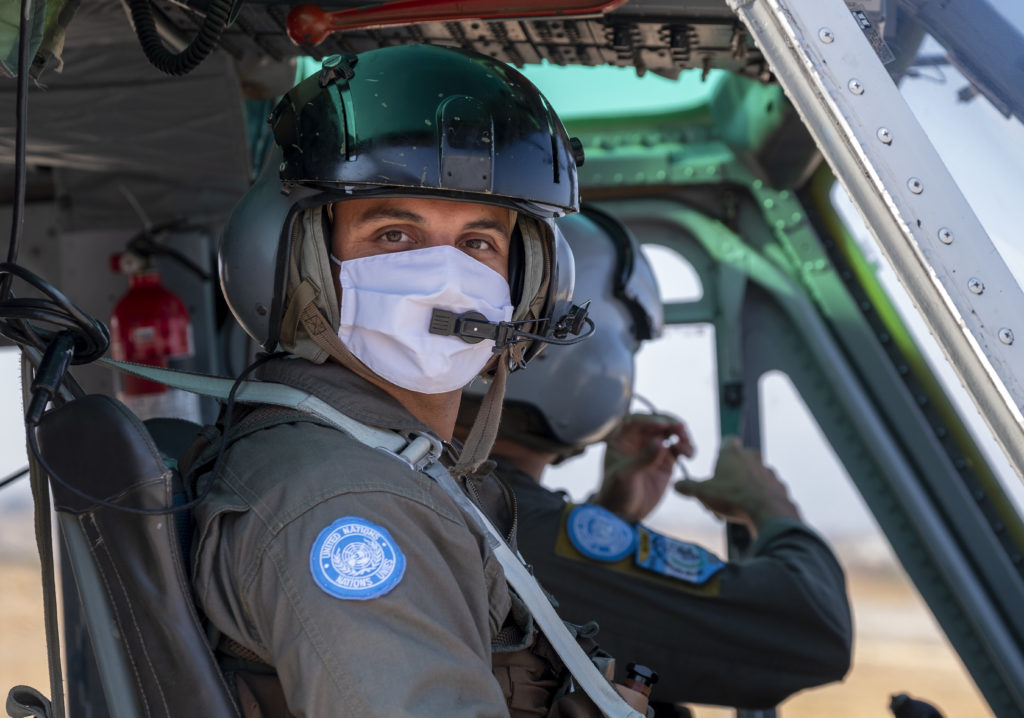 “In the beginning, we flew with U.N. observers not from our sector, so we had to wear masks all the time. The mask with the visor made the visor fog up very badly and made visibility difficult — we had to leave the visor slightly open letting wind into our eyes. Now, with the lack of passengers/observers means we have to do the observers’ job, so there was more work to do in the cabin apart from flying the aircraft.” 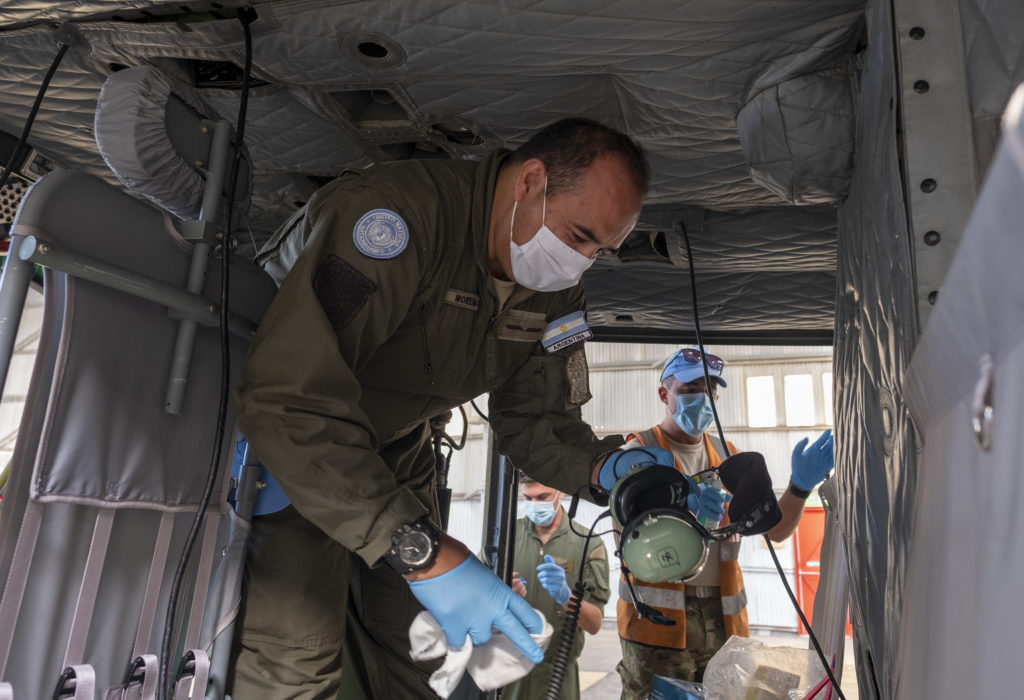 “We always used to disinfect the aircraft, but now it’s done much more meticulously and we take much more time doing this. Wearing our mask was strange at first, then we got used to this since we knew we had to. We are Argentinian — we are used to going straight from a handshake to a hug, and now we just say hello from a distance. This is very strange for us. So now in a working environment, we cannot even brush past the person next to us. The norm was to have a chat and a joke, push each other around, but now it’s no longer the norm.” 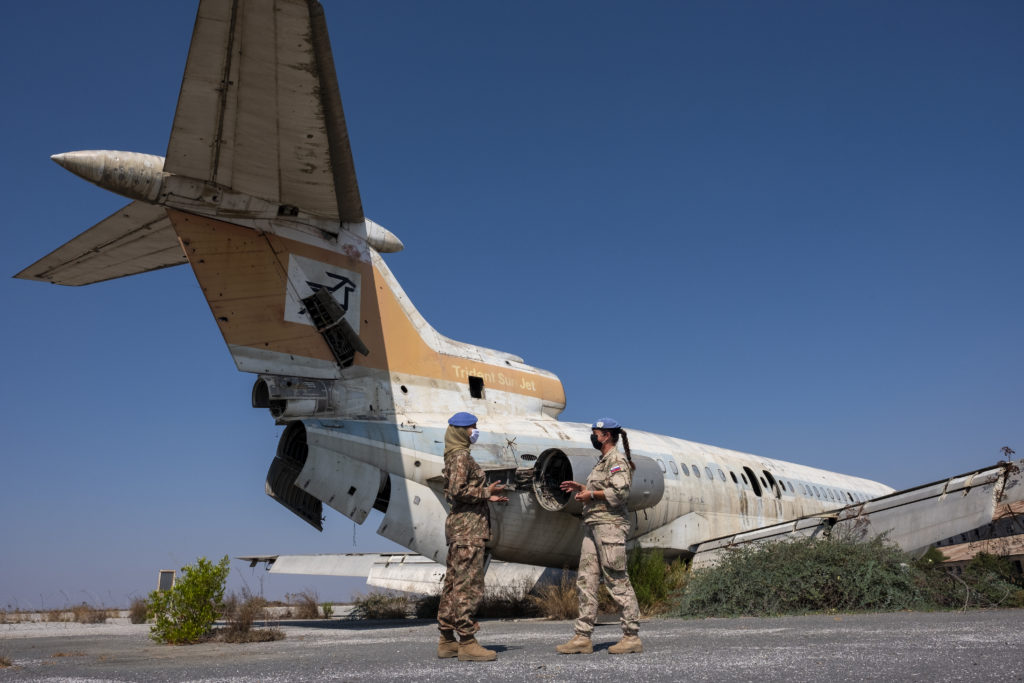 U.N. peacekeepers keep a check on the Cyprus Airways passenger aircraft that was abandoned on the runway at Nicosia Airport by passengers and crew during the invasion by Turkish troops in 1974. 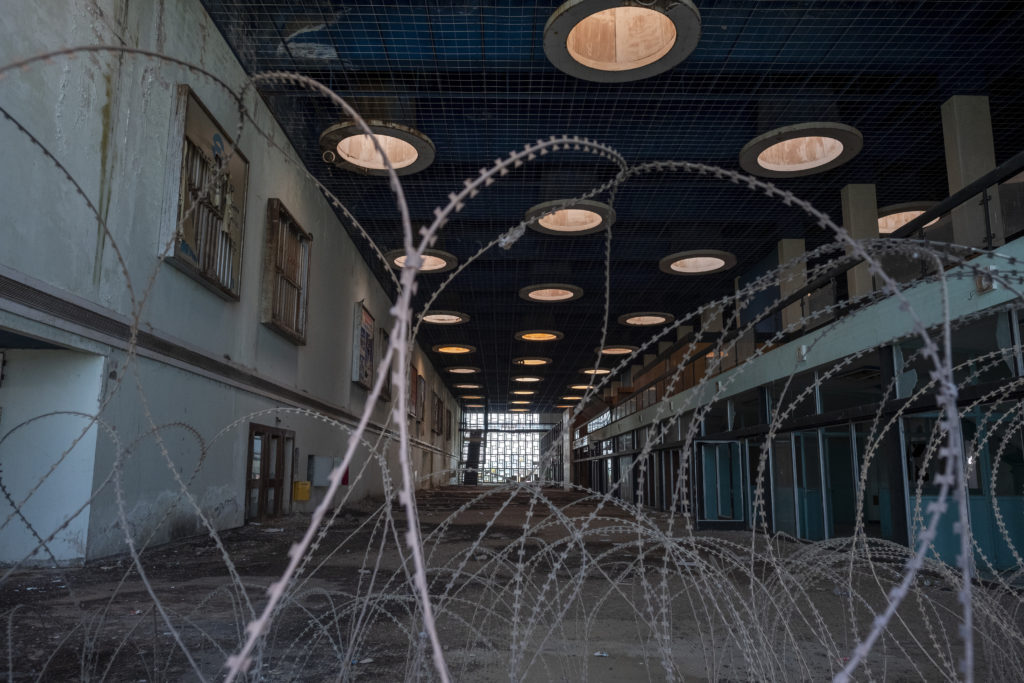 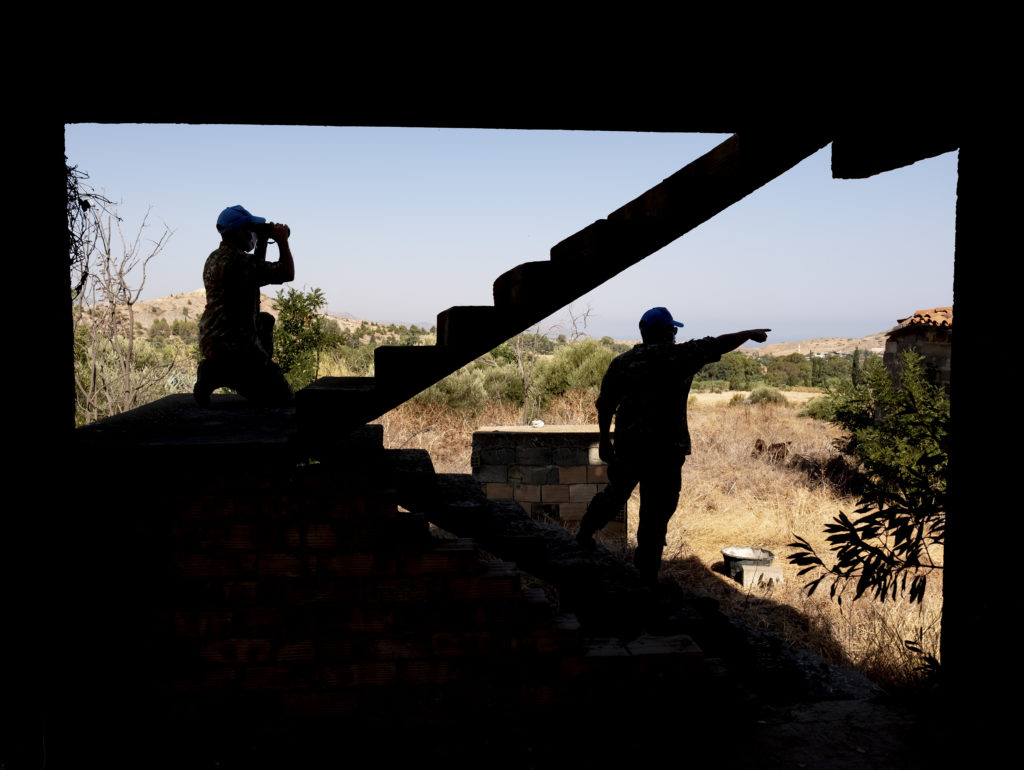 Lt. Agustin Galdeano and Sgt. Edwardo Silva of the Argentine U.N. peacekeeping force on patrol in the abandoned village of St George in Cyprus. 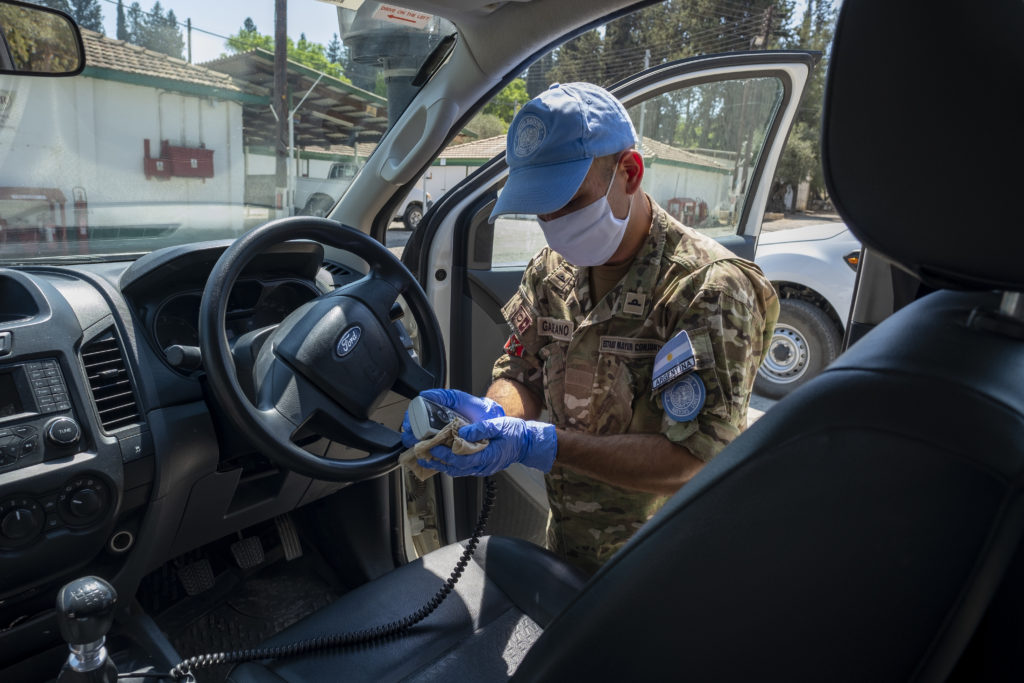 Lt. Agustin Galdeano cleans the radio handset of his vehicle after a patrol of the buffer zone. He said morale among the Argentine peacekeepers is high, despite the challenges posed by COVID-19. 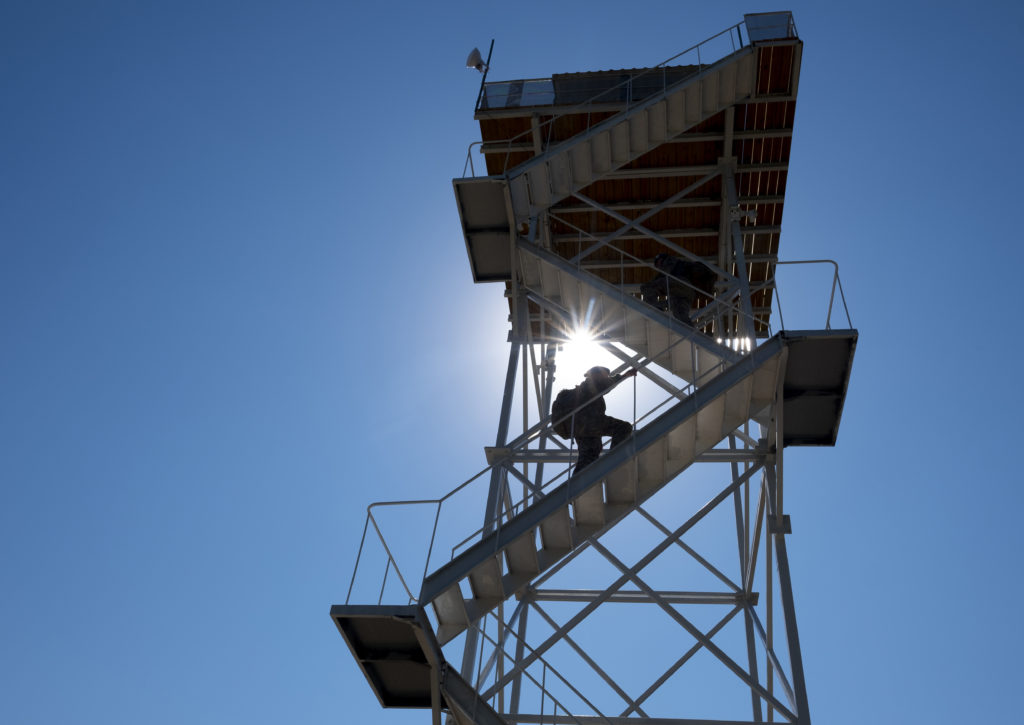 Pvt. Kelly Thomas of the British U.N. peacekeeping force climbs on
the observation tower in the U.N.-patrolled buffer zone in the divided capital
of Nicosia, Cyprus. 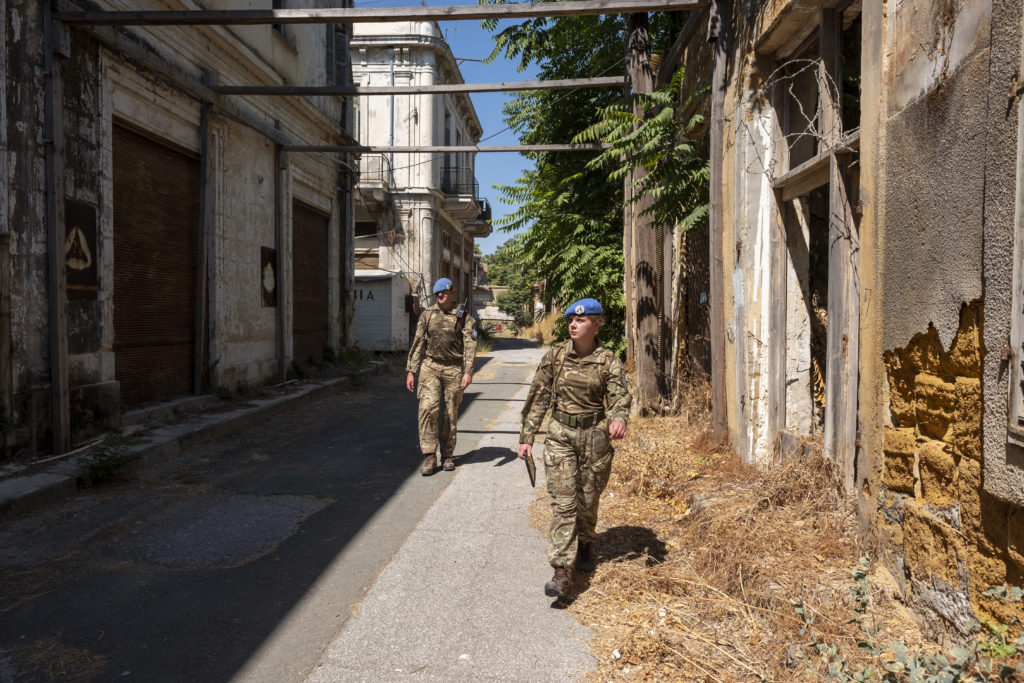 Lance Cpl. Samuel Delaney-Pettit and Pvt. Kelly Thomas of the British U.N. Peacekeeping force on patrol in the buffer zone in the divided Cyprus capital Nicosia. 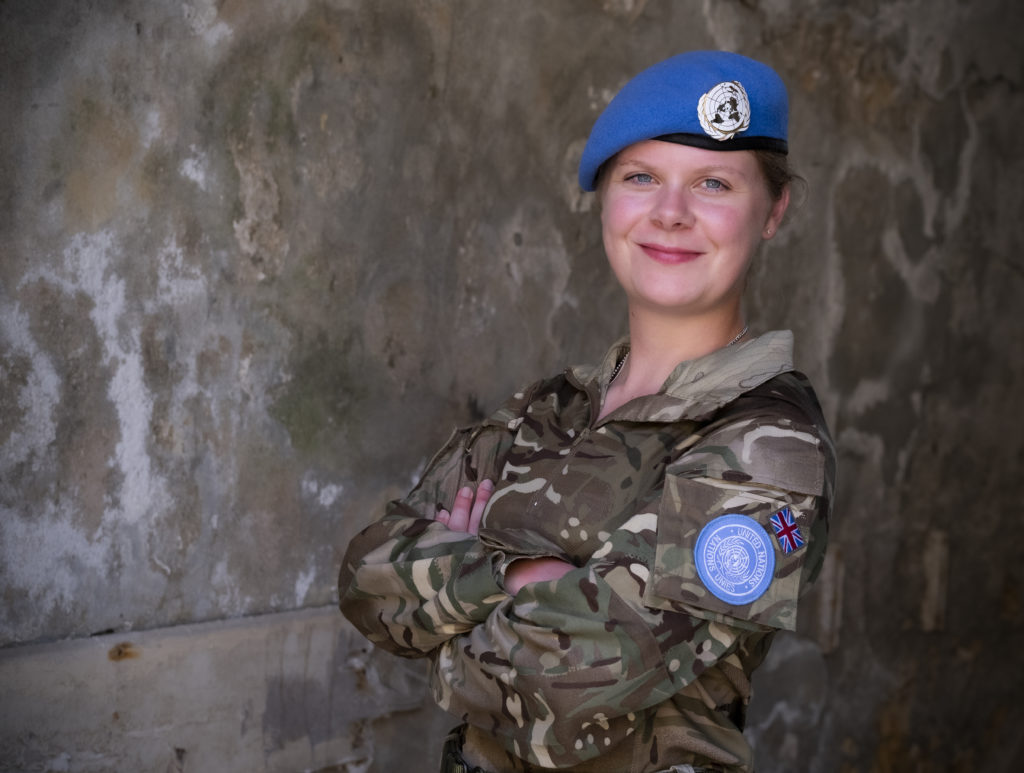 Portrait of Pvt. Kelly Thomas of the British U.N. Peacekeeping force on patrol in Nicosia. 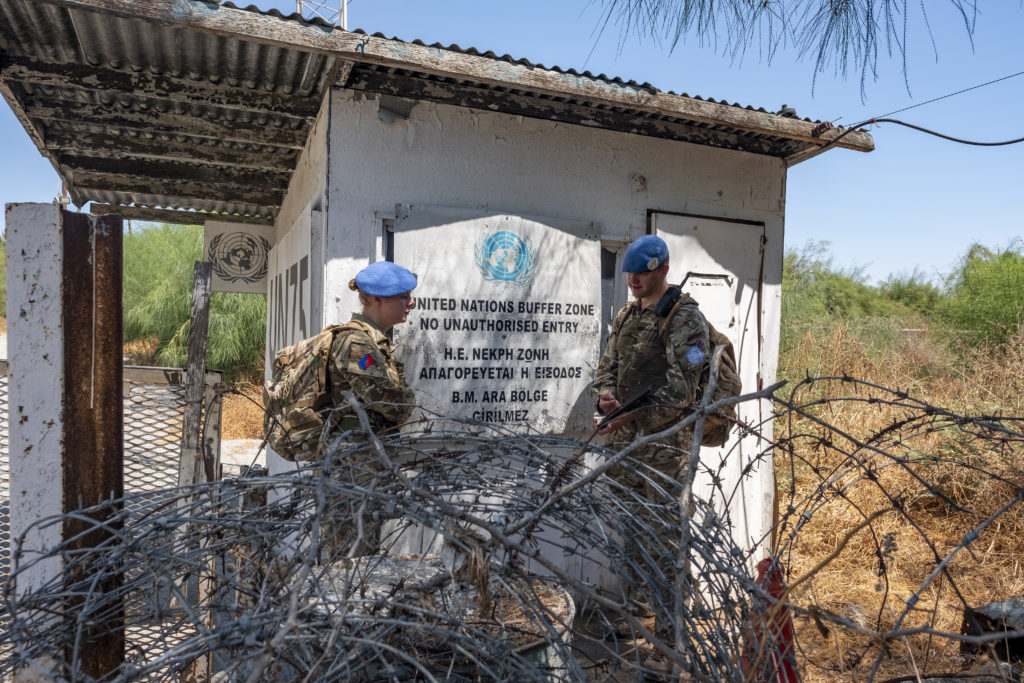 Lance Cpl. Samuel Delaney-Pettit and Pvt. Kelly Thomas of the British U.N. Peacekeeping force at one of the many checkpoints on the buffer zone in the divided capital, Nicosia. 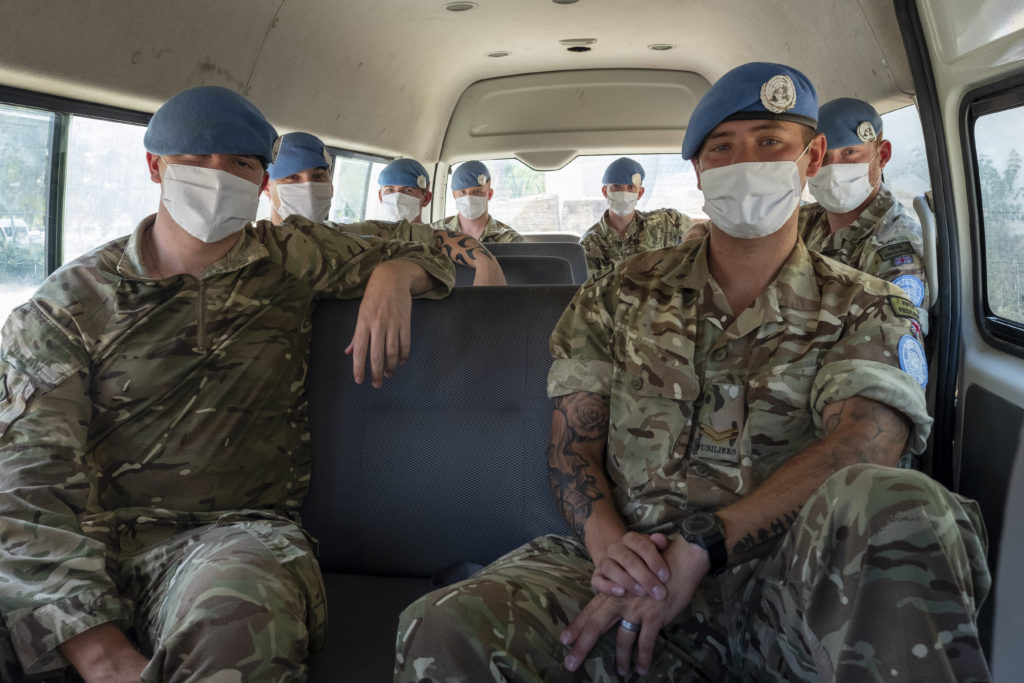 Members of the British U.N. Peacekeeping force on their way to multiple
checkpoints along the buffer zone in the divided capital, Nicosia. 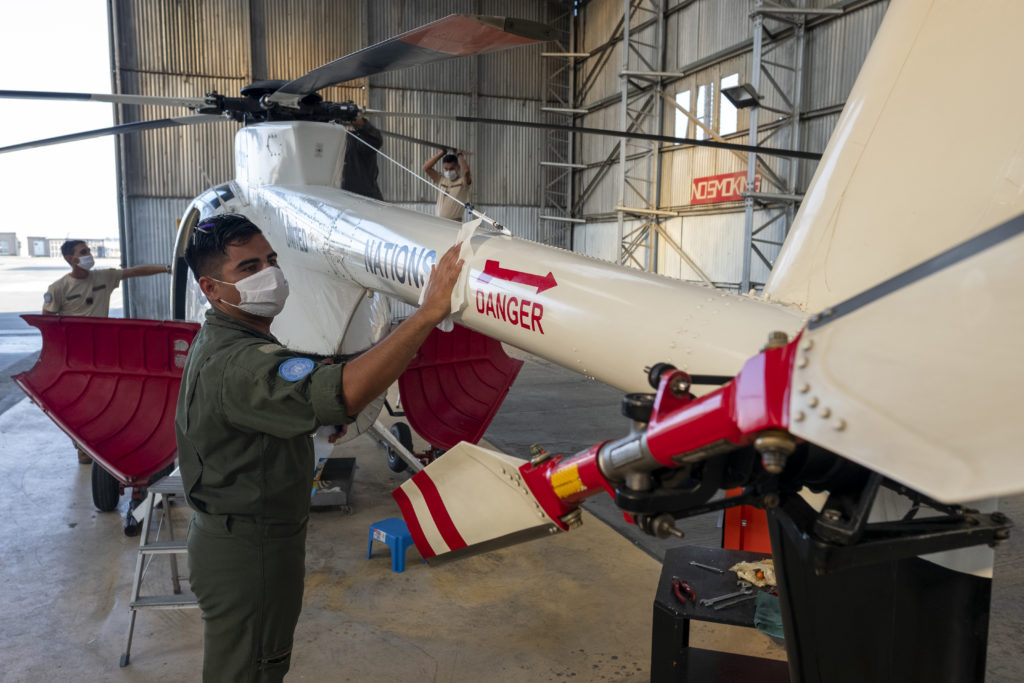 Argentinian U.N. Peacekeeper pilots and ground crew rigorously disinfect their helicopters before and after every flight. 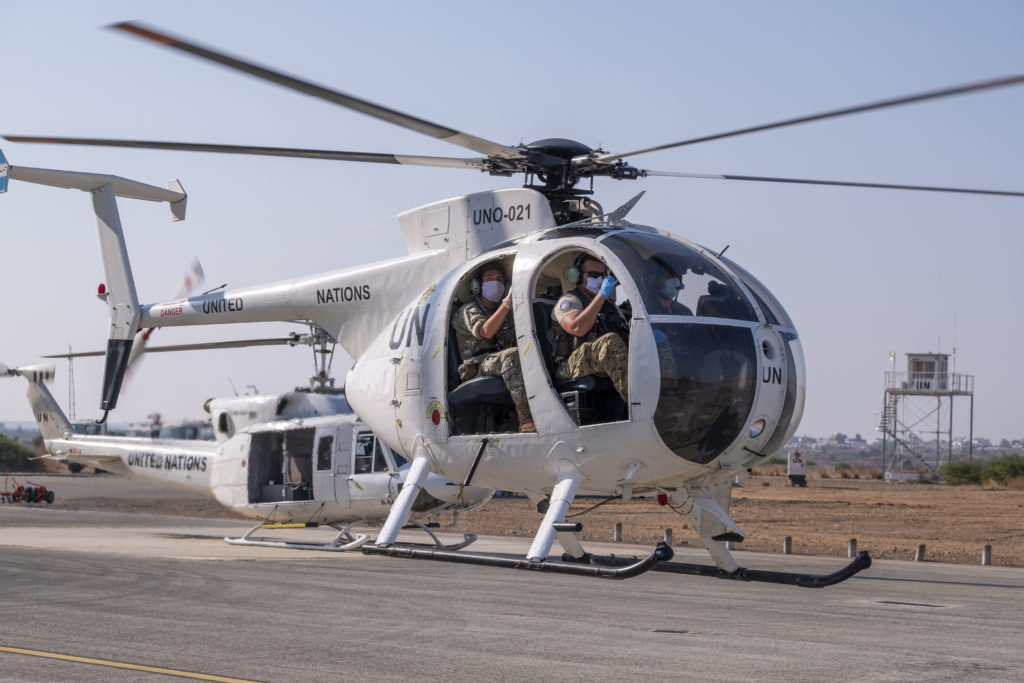 Argentinian Air Force personnel, U.N. peacekeepers, take off in their helicopters to observe the buffer zone in divided Cyprus.

Above: Lt. Agustin Galdeano and Sgt. Edwardo Silva of the Argentinian U.N. peacekeeping force on patrol of the abandoned village of St George in the U.N. patrolled buffer zone in Cyprus.