We began to film secretly in Libya. Then we had to escape

We knew Libya would be tough. We set out to report on the re-emergence of the Islamic State group and the immigration crisis. The latter was particularly sensitive, since last November when CNN broadcast shocking video of slave auctions selling African migrants outside Tripoli. The Libyan government opened an investigation into the auctions but also blocked all American TV outlets from entering the country.

We spent five months pushing Libyan authorities for visas and permits, and made repeated trips to Libyan embassies in Rome and London.

Finally we arrived in Tripoli in early August — typically high season for migrants trying to cross the Mediterranean into Europe. An estimated 700,000 are currently bottlenecked along the coast, trapped between abusive conditions in Libya and an increasingly populist, anti-migrant Europe that no longer wants them.

A few days into our journey, it became clear our hard-earned filming permits were often meaningless.

When we arrived at Mitiga airport in Tripoli, we were immediately met by a government minder named Anwar Al Mabruk Gamberi. The obstruction to our reporting was almost instant.

One morning, he refused to allow us to attend scheduled interviews in Sirte, the hometown of former Libyan strongman Muammar al-Qaddafi, and the former capital of the ISIS caliphate in Libya.

“Why,” we asked, “if we have the proper permits?” “Because I say so,” was his response. He and other minders — sometimes as many as three cars’ full — would never leave our side for the two weeks we spent in Libya.

That is until we had to flee. 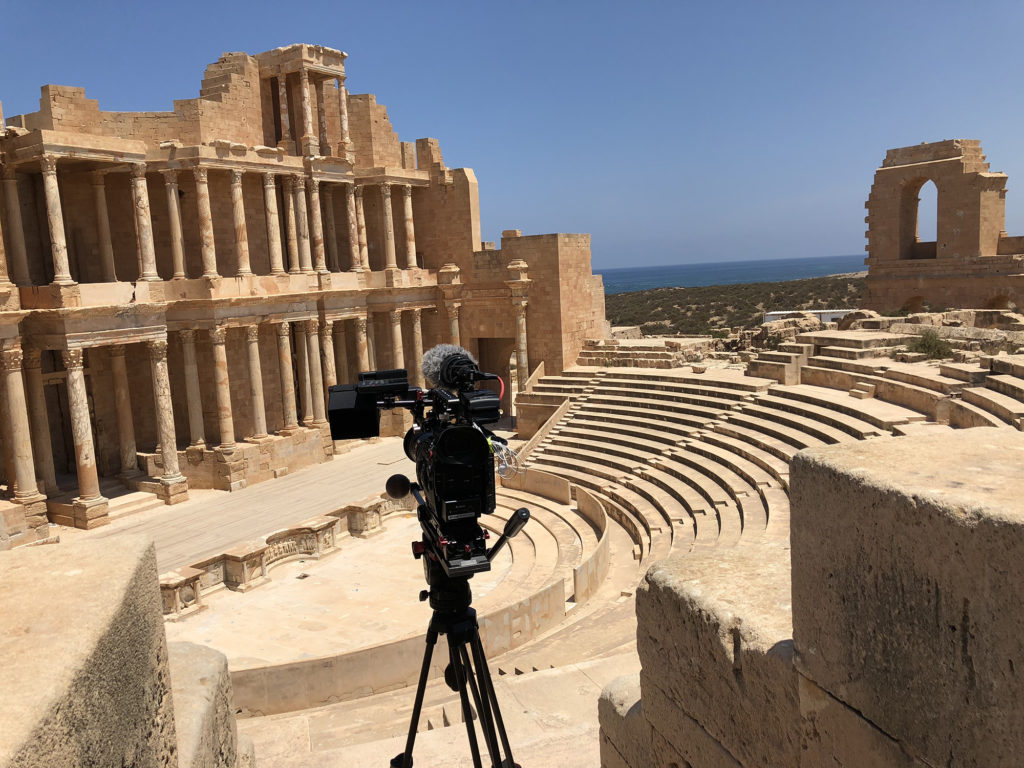 The team began filming in secret after it appeared their permits were useless. Pictured here is a Roman amphitheater in the Libyan city of Sabratha on the Mediterranean coast. Photo by Alessandro Pavone

A few days into our journey, it became clear our hard-earned filming permits were often meaningless. Detention centers slammed the door on us. Government employees at an airplane hangar, where migrants were being flown back to their home countries, threatened to take our cameras.

So we began filming in secret. Our best shot was on Fridays — holy days — the only time our minders would leave us alone so they could go to the mosque. It was a really risky move. We wanted to film the vast majority of migrants and refugees who do not live in detention centers, but in urban dwellings among the Libyan population. But in Tripoli, this meant going to the most dangerous parts of town. Right before we arrived in the Abu Salim neighborhood, a shootout took place between rival militias — some 22 operate in the city. If the government found out we were there, they’d certainly arrest us.

But that was where the story was. It was where battered migrants and refugees, who had crossed thousands of miles of Sahara Desert, endured torture, and even slavery, were now living in fear.

One young man in particular had lost his feet and fingers due to horrendous abuse from traffickers and Libyan authorities. Shortly after we parted ways, he called to tell us Libyan police had pistol-whipped him and taken $200 — money his fellow refugees had pooled to help him out, since he couldn’t work due to his condition. When we asked him why the police targeted him, he said it’s because they knew he was helpless. “I’m a black migrant. This is Libya,” he added.

Then, violence broke out in the streets of Tripoli. Some 60 people would be killed in about one week. Our minders were becoming paranoid about our reporting. They threatened to detain us and confiscate our footage. 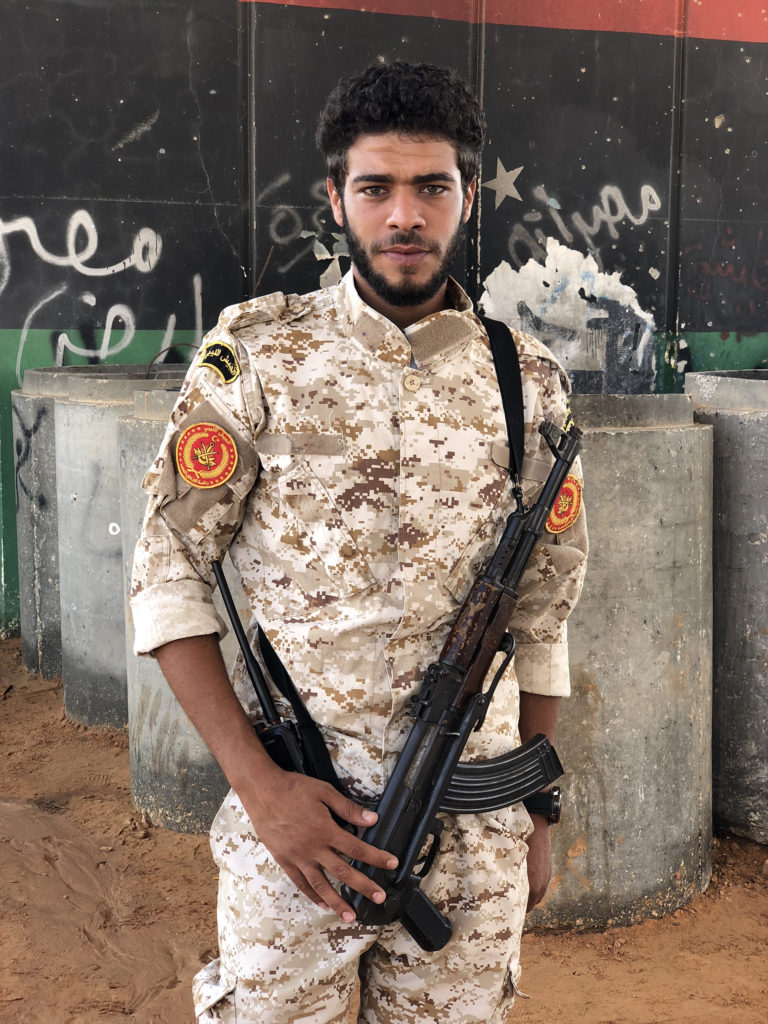 Militias operate all across Libya. Photo by Alessandro Pavone

That’s when we decided to flee Tripoli. We hired a car to pick us up in the middle of the night and take us to Misrata, a semi-autonomous city about three hours east of Tripoli, with an international airport known to be slightly outside the grip of the government. Neither of us will ever forget that black Kia sedan pulling up in front of our hotel. The driver flashed the headlights, the signal to load up and leave.

But we were spotted. Our minder, Anwar, called in a froth, swearing he would stop us at the first checkpoint and have us arrested. All we could do was keep driving up the coast, and wear our baseball caps low in a slapstick effort at hiding our Westernness.

Somehow we made it past the checkpoints and to Misrata. It was the last we saw of our minders. But not the last of our government harassment. We still had to wait three days for the next flight to Tunis, where we’d make connecting flights back home. On our first day in Misrata, Libyan intelligence officers caught up with us — polite men who apologized for our treatment. But their demeanor soon turned threatening.

Neither of us will ever forget that black Kia sedan pulling up in front of our hotel. The driver flashed the headlights, the signal to load up and leave.

In Misrata, we paid a local fixer to help us navigate our way out of the country. One morning, as we left the hotel, he spotted an ominous figure waiting for us. “Go back inside the hotel, lock the door,” our fixer said calmly.

As our fixer spoke to this unfriendly figure, we spent the next three hours hiding our videotape, and calling people who could help. Among them was a dear friend, Darren White, formerly with British special forces and now a security adviser with Ibex Risk Management (working this time only for gratitude). “It’s very likely they’re going to detain you,” he said. “Or worse, they could have you abducted by a hostile militia. It’s happened before.”

We also called the U.S. State Department and the United Nations, who volunteered to intervene on our behalf. When our fixer came back inside the hotel, he confirmed that the government did indeed plan to detain us. But after much work behind the scenes, they decided to let us go to the airport the next day. Darren still advised strict caution: “Leave the hotel under no circumstances until it’s time to fly.”

The next morning, we loaded into our fixer’s car and went to the airport. Taking no chances, Darren arranged for one of his local Libyan contacts to tail our car. “In case you get lifted, at least I’ll know which car took you.” Fortunately, we made it to the airport and out of the country without incident.

It was some of the hardest reporting each of us has ever encountered. If we could do it all over again, we would avoid Tripoli completely. The security risks are simply too great for freelance reporters, and the government obstruction is overwhelming. Locals in Tripoli are also incredibly shy of cameras, often hostile.

Given these challenges, we’re very proud of the important stories we were able to cover.

Their report from Libya, done with support from the Pulitzer Center on Crisis Reporting, airs Tuesday on the PBS NewsHour. You can watch it here.

Left: Journalists Christopher Livesay and Alessandro Pavone arrived in Tripoli, Libya in early August to report on the re-emergence of the Islamic State group and the immigration crisis. Photo by Alessandro Pavone

Christopher Livesay is a foreign correspondent and producer based in Rome.

Alessandro Pavone is a freelance videographer and producer.