ARRIAGA, Mexico — Hundreds of Mexican federal officers carrying plastic shields blocked a Central American caravan from advancing toward the United States on Saturday, after a group of several thousand migrants turned down the chance to apply for refugee status and obtain a Mexican offer of benefits.

Mexican President Enrique Pena Nieto has announced what he called the “You are at home” plan, offering shelter, medical attention, schooling and jobs to Central Americans in Chiapas and Oaxaca states if migrants apply, calling it a first step toward permanent refugee status. Authorities said more than 1,700 had already applied for refugee status.

But a standoff unfolded as federal police officers blocked the highway, saying there was an operation underway to stop the caravan. Thousands of migrants waited to advance, vowing to continue their long trek toward the U.S. border.

At a meeting brokered by Mexico’s National Human Rights Commission, police said they would reopen the highway and only wanted an opportunity for federal authorities to explain the proposal to migrants who had rejected it the previous evening. Migrants countered that the middle of a highway was no place to negotiate and said they wanted to at least arrive safely to Mexico City to discuss the topic with authorities and Mexican lawmakers.

They agreed to relay information back to their respective sides and said they would reconvene.

Orbelina Orellana, a migrant from San Pedro Sula, Honduras, said she and her husband left three children behind and had decided to continue north one way or another.

“Our destiny is to get to the border,” Orellana said.

She was suspicious of the government’s proposal and said that some Hondurans who had applied for legal status had already been sent back. Her claims could not be verified, but migrants’ representatives in the talks asked the Mexican government to provide a list of anyone who had been forced to return. 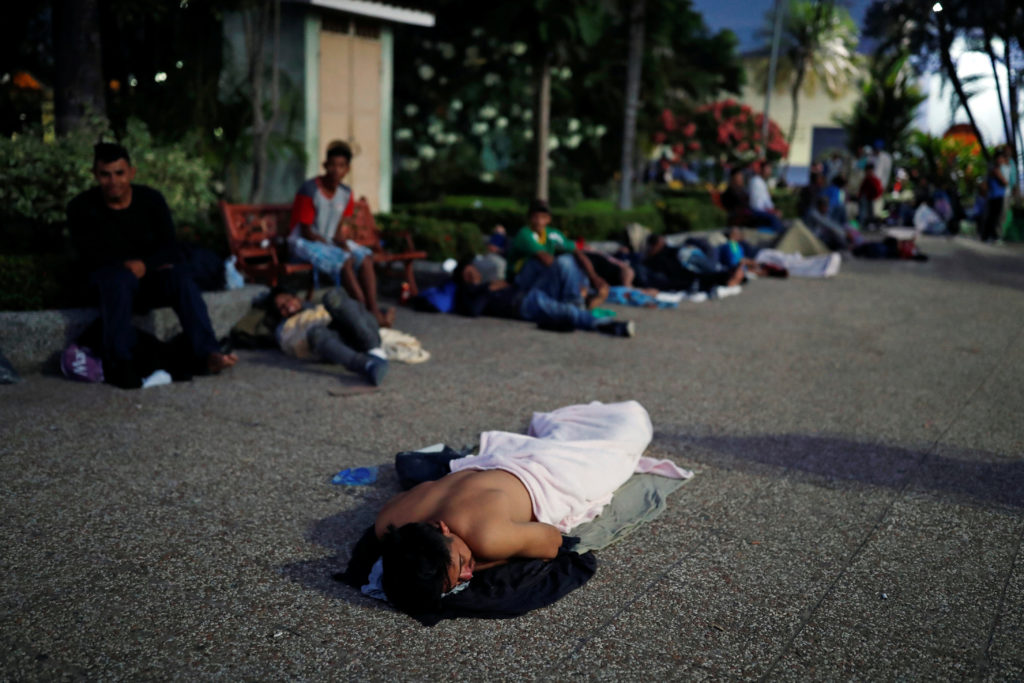 Central American migrant, part of a caravan trying to reach the U.S., sleeps on the pavement in Tecun Uman, Guatemala, October 27, 2018. Photo by Carlos Garcia Rawlins/Reuters

The standoff comes after one of the caravan’s longest days of walking and hanging from passing trucks on a 60-mile journey to the city of Arriaga.

The bulk of the migrants were boisterous Friday evening in their refusal to accept anything less than safe passage to the U.S. border.

“Thank you!” they yelled as they voted to reject the offer in a show of hands. They then added: “No, we’re heading north!”

Still 1,000 miles from the nearest U.S. border crossing at McAllen, Texas, the journey could be twice as long if the group of some 4,000 migrants heads for the Tijuana-San Diego frontier, as another caravan did earlier this year. Only about 200 in that group made it to the border.

While such migrant caravans have taken place regularly over the years, passing largely unnoticed, they have received widespread attention this year after fierce opposition from U.S. President Donald Trump.

On Friday, the Pentagon approved a request for additional troops at the southern border, likely to total several hundred, to help the U.S. Border Patrol as Trump seeks to transform concerns about immigration and the caravan into electoral gains in the Nov. 6 midterms.

Defense Secretary Jim Mattis signed off on the request for help from the Department of Homeland Security and authorized the military staff to work out details such as the size, composition and estimated cost of the deployments, according to a U.S. official who spoke on condition of anonymity to discuss planning that has not yet been publicly announced.

Stoking fears about the caravan and illegal immigration to rally his Republican base, the president insinuated that gang members and “Middle Easterners” are mixed in with the group, though he later acknowledged there was no proof of that.

At a church in Arriaga that opened its grounds to women and children Friday, Ana Griselda Hernandez, 44, of Mapala, Honduras, said she and two friends traveling with children had decided to pay for a bus ride from Pijijiapan, because the 4-year-old and 5-year-old would have never covered the 60-mile distance.

“It’s difficult because they walk very slowly,” she said. She pointed out scabbed-over blisters on her feet, a testament to the fact they had walked or hitched rides since leaving their country.

The caravan is now trying to strike out for Tapanatepec, about 29 miles away.

Up until now, Mexico’s government has allowed the migrants to make their way on foot, but has not provided them with food, shelter or bathrooms, reserving any aid for those who turn themselves in.

Police have also been ejecting paid migrant passengers off buses, enforcing an obscure road insurance regulation to make it tougher for them to travel that way. 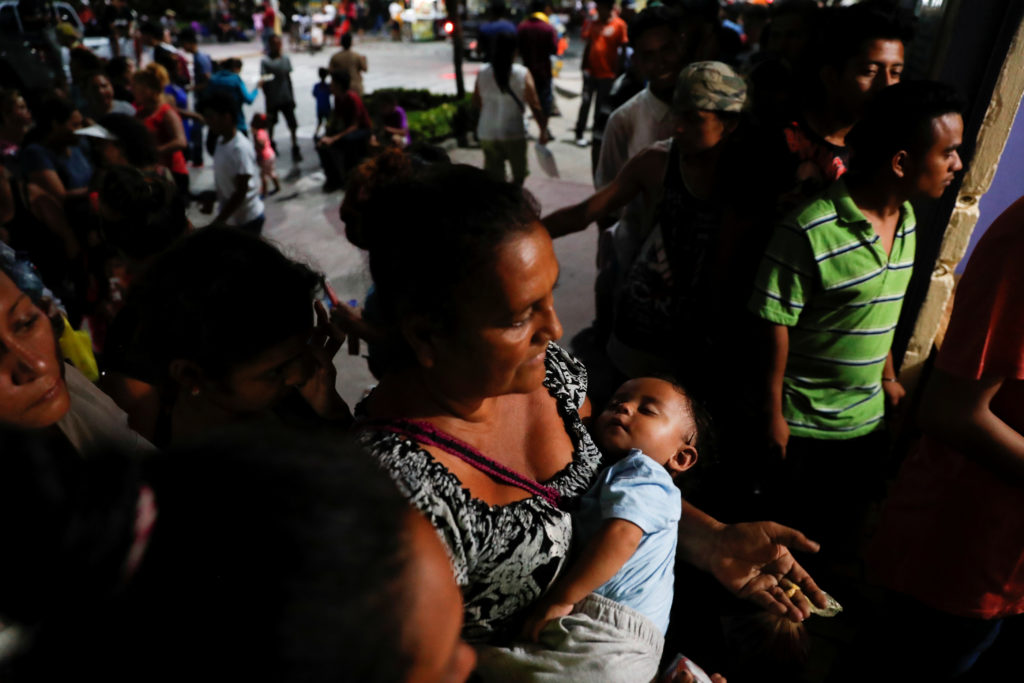 Eva Carrillo, migrant from Honduras, part of a caravan trying to reach the U.S., queues while carrying the baby of a friend, while she waits for food to be handed out at a church, in Tecun Uman, Guatemala October 26, 2018. Photo by Carlos Garcia Rawlins/Reuters

On Friday, authorities were cracking down on smaller groups trying to catch up with the main caravan, detaining about 300 Hondurans and Guatemalans who crossed the Mexico border illegally, said an official with the national immigration authority.

Migrants, who enter Mexico illegally every day, usually ride in smugglers’ trucks or buses, or walk at night to avoid detection. The fact that the group of about 300 stragglers was walking in broad daylight suggests they were adopting the tactics of the main caravan, which is large enough to be out in the open without fear of mass detention.

However, it now appears such smaller groups will be picked off by immigration authorities, keeping them from swelling the caravan’s ranks.

On Friday evening, Irineo Mujica, whose organization People without Borders is supporting the caravan, accused Mexican immigration agents of harassment and urged migrants to travel closely together.

“They are terrorizing us,” he said.

Left: Central Americans, part of a caravan trying to reach the U.S., stand in the Suchiate River as they look at a makeshift raft transporting goods to Ciudad Hidalgo in Mexico, in Tecun Uman, Guatemala, October 27, 2018.Photo by Carlos Garcia Rawlins/Reuters