On Nov. 4, 1979, a group of young Iranian activists broke into the U.S. embassy in downtown Tehran, captured virtually every American working there, and began one of the worst diplomatic crises in American history.

Though the 66 hostages were eventually released, the 14 month-long ordeal poisoned the already strained relations between the United States and Iran. The hostage crisis was a humiliating and grueling time for President Jimmy Carter, and it gave many Americans their first glimpse of Islamic radicalism. 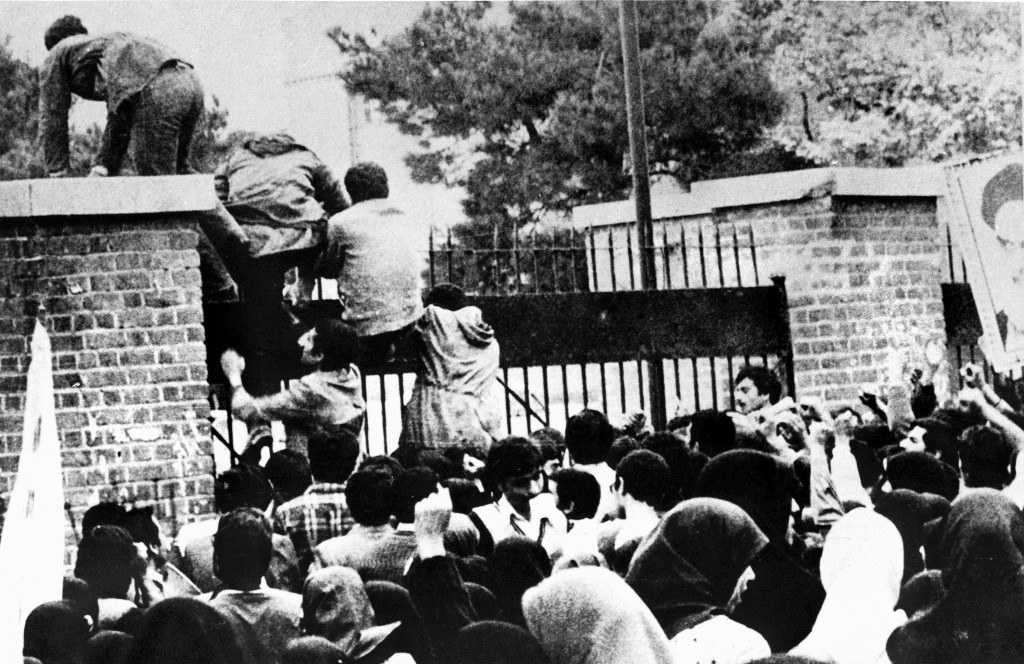 Iranian students climb over the wall of the U.S. embassy in Tehran during the Iranian Revolution, Nov. 4, 1979. The students went on to seize the embassy staff, and hold 52 of them hostage for 444 days. Photo by AFP/Getty Images

For Ayatollah Khomeini and his fellow Iranian revolutionaries, the capture of America’s embassy and its diplomatic staff was a hugely symbolic victory over “The Great Satan.”

Thirty-five years later, many analysts believe the ill-will from that crisis echoes to this day. Former State Department official John Limbert, who was also a hostage, says that when Secretary of State John Kerry and Iranian Foreign Minister Mohammad Javad Zarif sit down to negotiate Iran’s nuclear program, the decades-old crisis lingers as a “ghost in the room.” 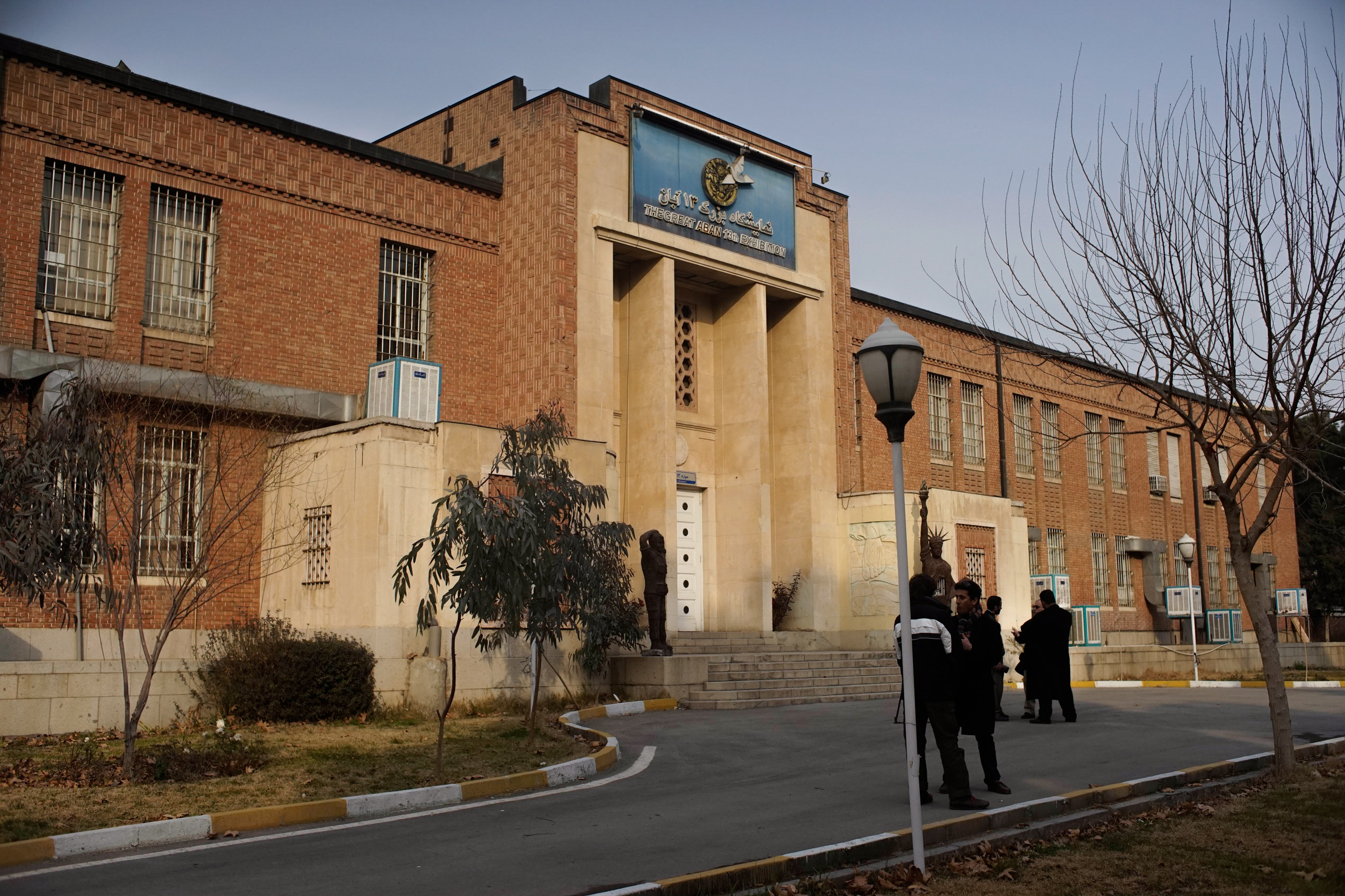 Labeled the “Den of Spies” by the Iranians, this was the main building stormed by the hostage takers in 1979, as dramatized in the opening of the 2012 Ben Affleck film “Argo.” This was also where the hostages were initially kept captive until the failed rescue attempt prompted the Iranians to separate the hostages at different locations. The building now houses the propaganda museum. The rest of the embassy compound is reportedly used to train members of Iran’s Revolutionary Guard.

But what became of the former American embassy?

While filming last year in Iran for a series of NewsHour reports on how western sanctions are impacting that nation, we were granted rare permission by the Iranians to see inside the former U.S. embassy in downtown Tehran.

Here’s an inside look at what the hostage-takers referred to as the “Den of Spies”: 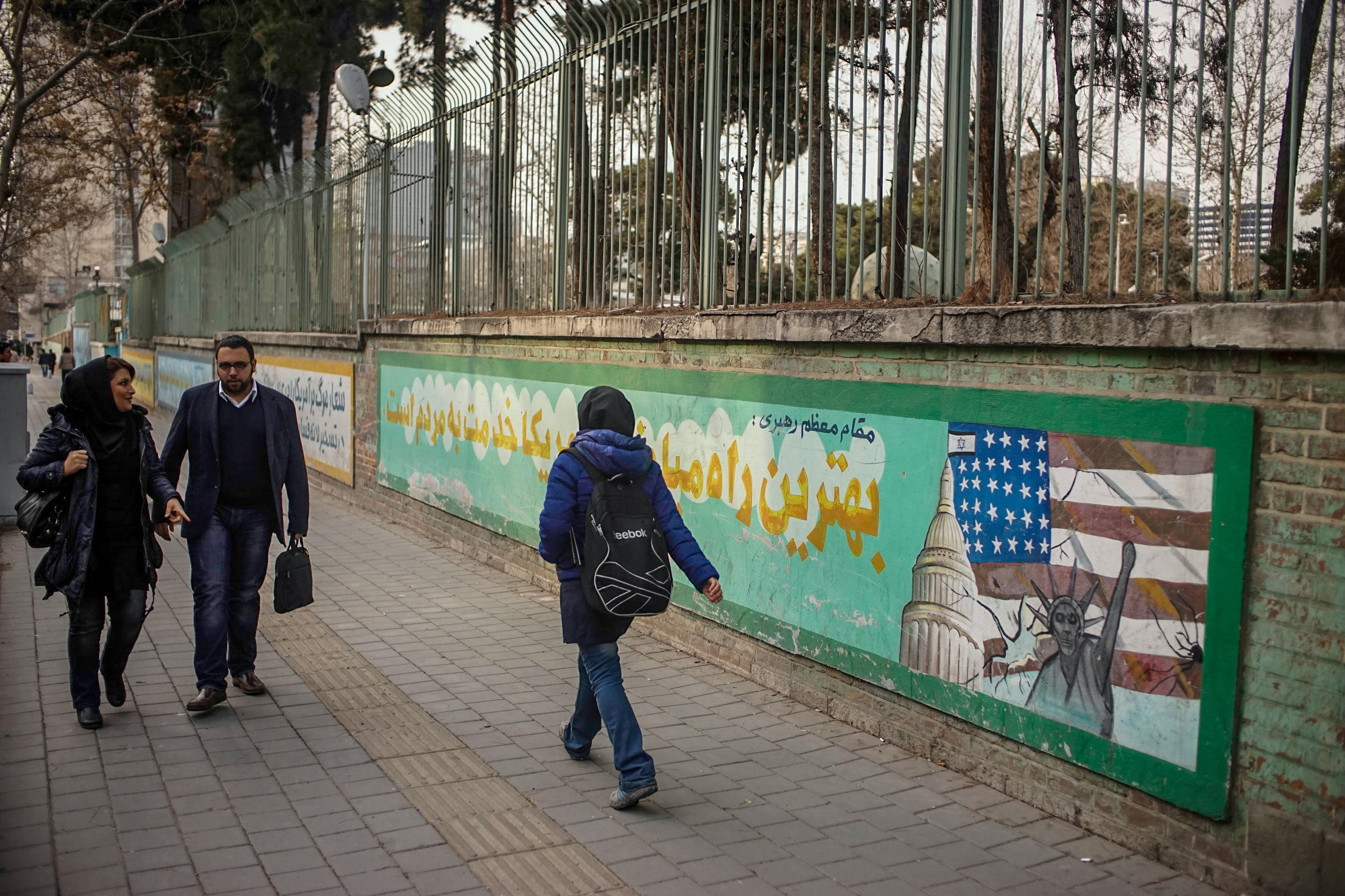 Exterior wall of the former U.S. embassy compound in Tehran, covered with anti-American graffiti. While most Iranians pass by the massive compound and pay it no interest, the Iranian government stages anti-American protests here on the anniversary of the 1979 takeover. While there’s an undeniable strain of anti-Americanism in parts of Iranian society, these kinds of displays were rare, and stood in contrast to the kindness and curiosity from most of the Iranians we met. 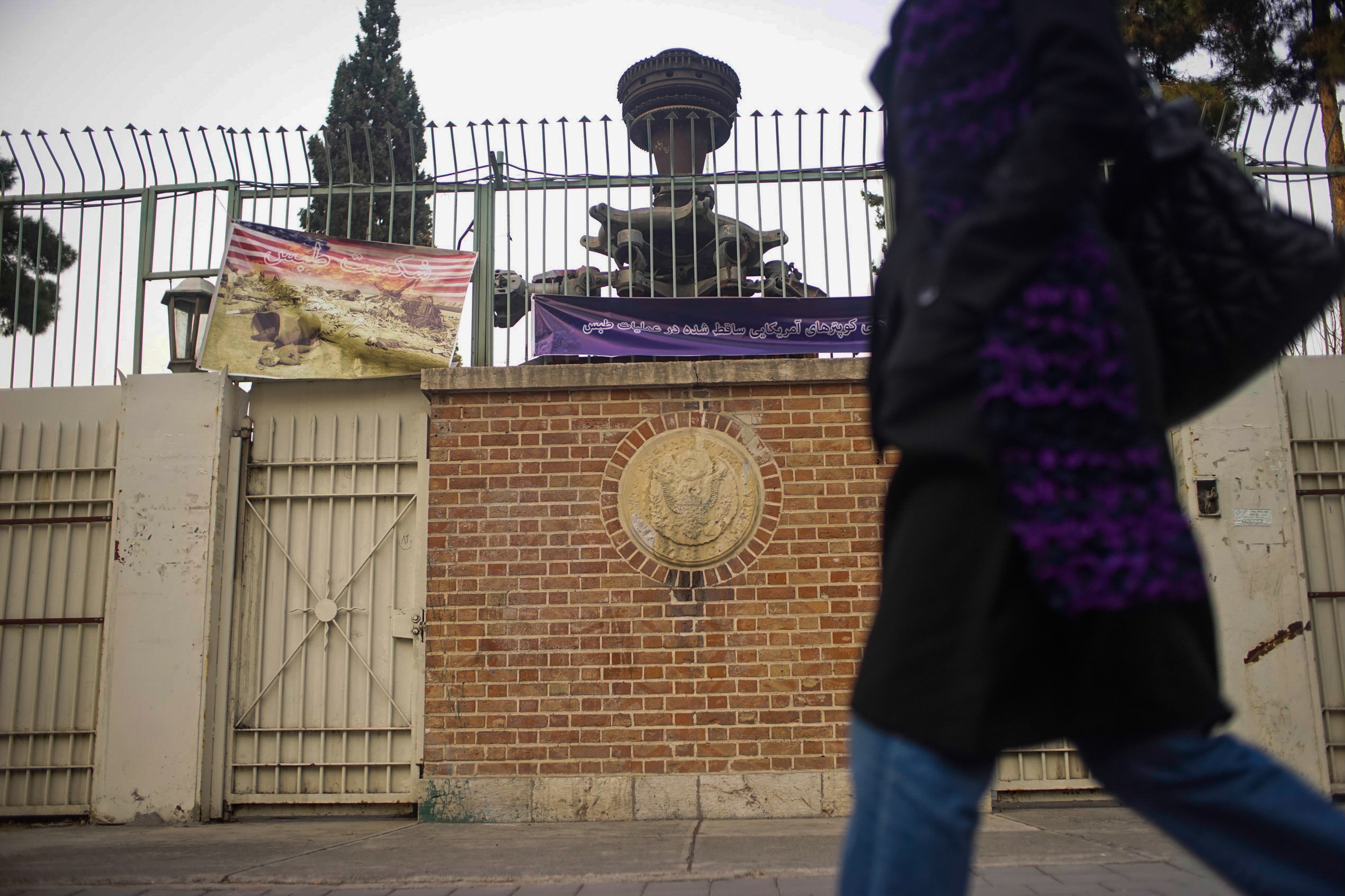 The banner hanging at the front gate of the former embassy is reported to be a photo of the wreckage of a failed American rescue mission from 1980, where eight U.S. military members died when their aircraft were damaged in a sand and dust storm and crashed. Ayatollah Khomeini believed the storm was a sign from God of the rightness of the Iranian revolution. 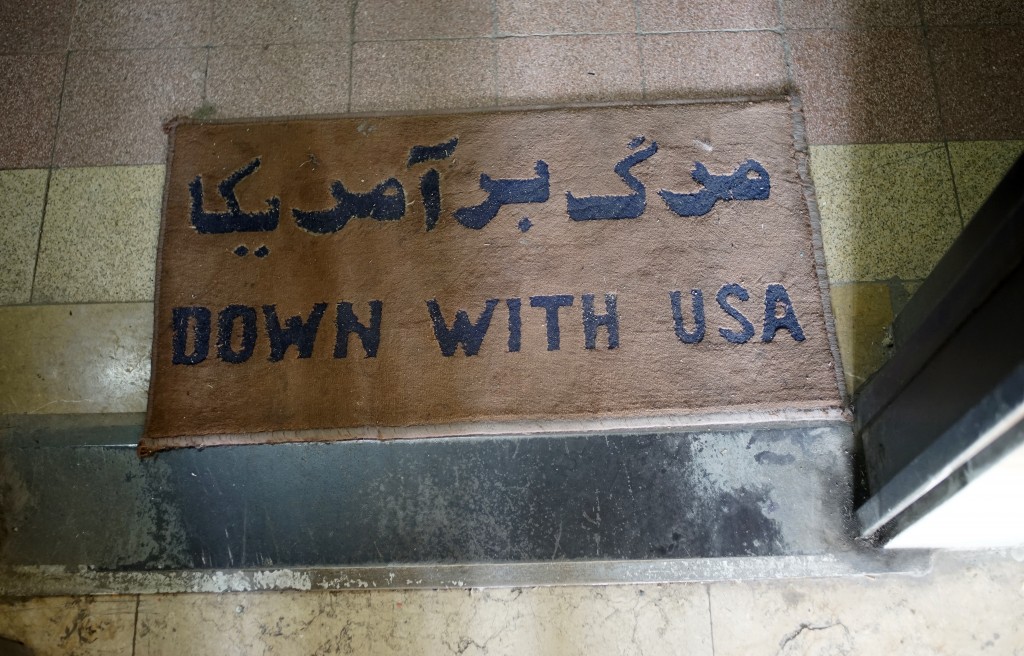 A “Down with USA” mat welcomes visitors to a museum housed in the former embassy. 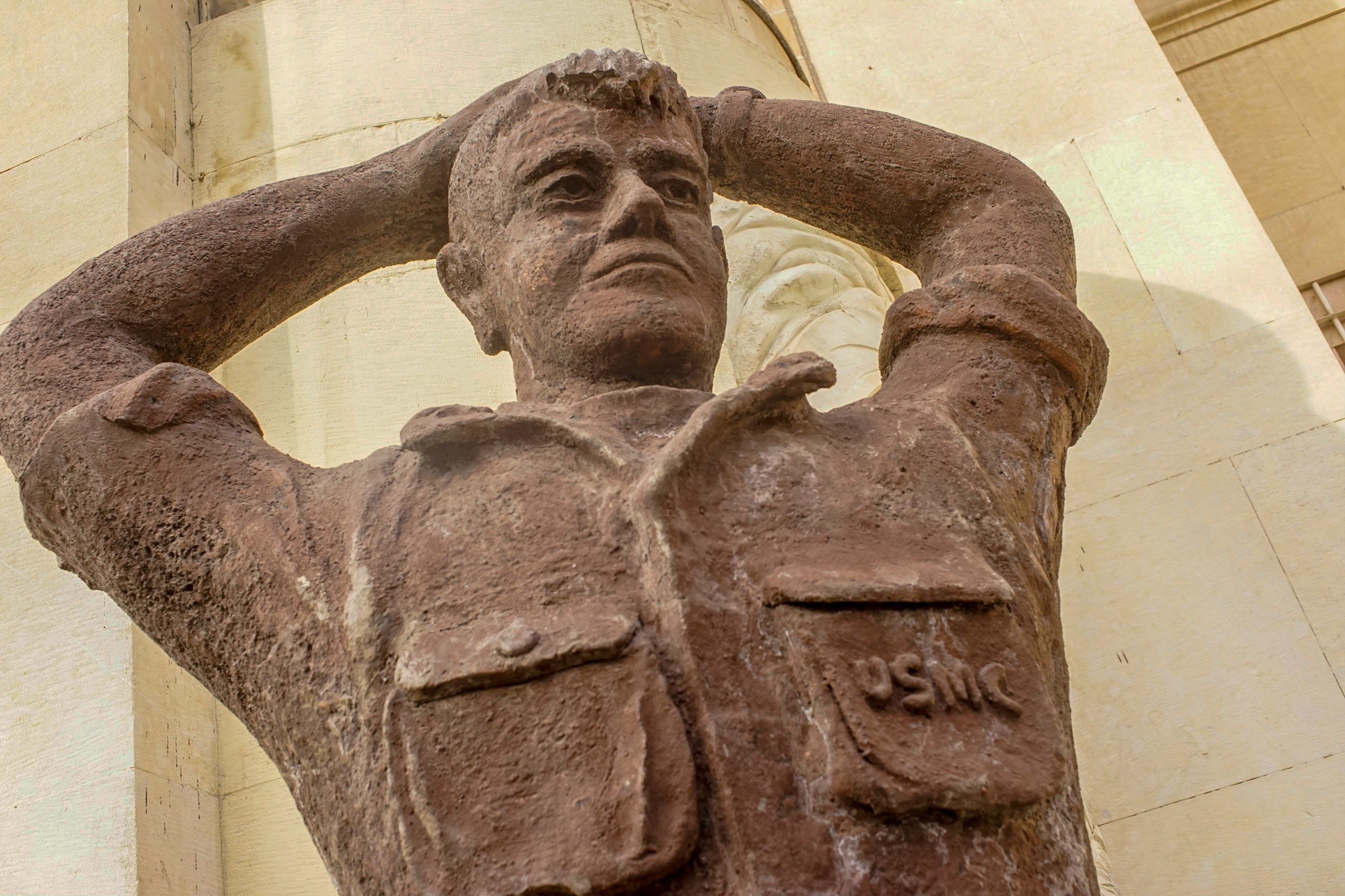 One of two plaster statues outside the main embassy building depicts a U.S. Marine, seemingly a copy of an image of captured Marine Corporal Steve Kirtley, who was one of the Marines stationed at the embassy in 1979. 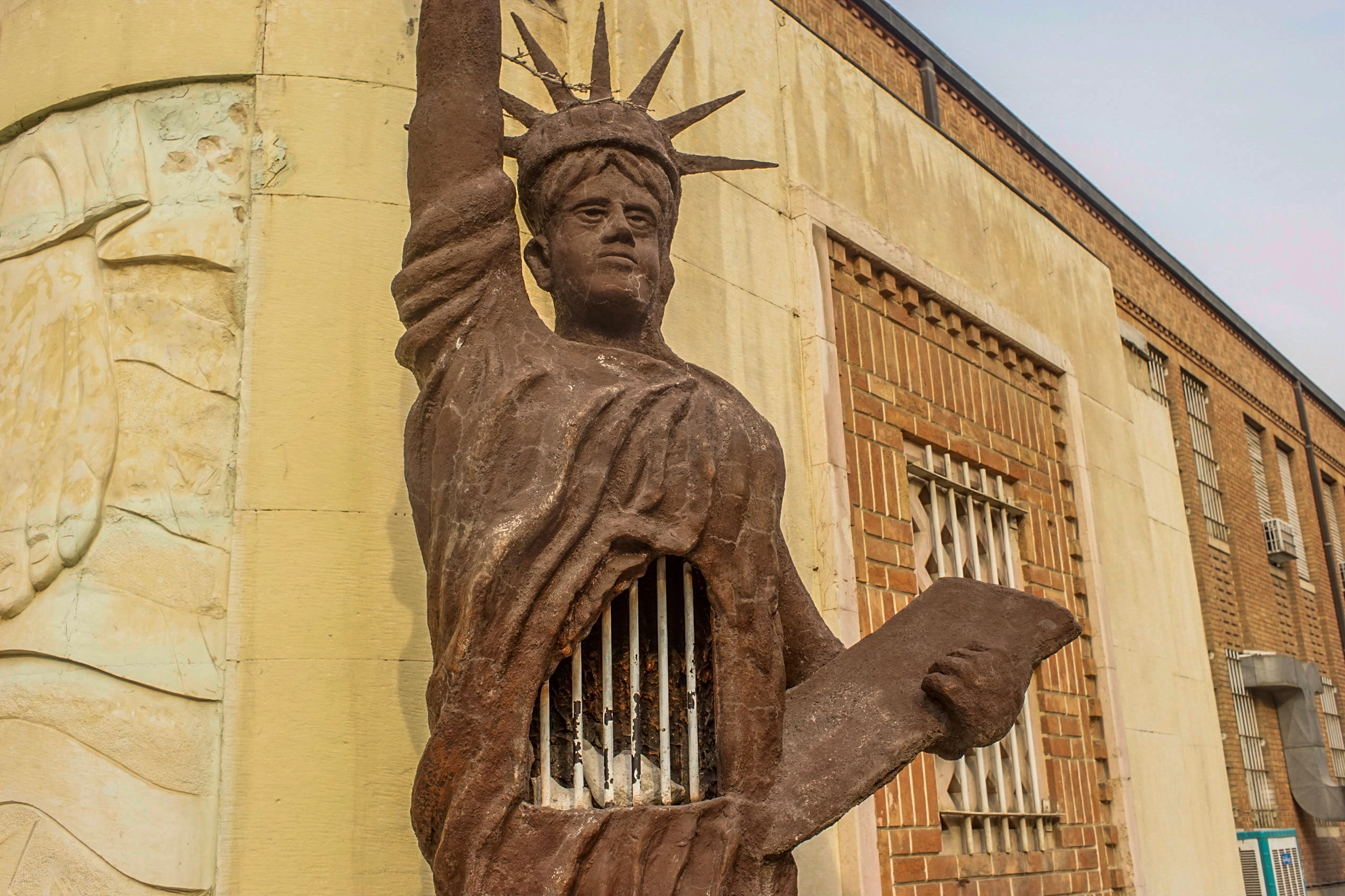 The second anti-American statue outside the main entrance is a mini Statue of Liberty with a gown that opens to reveal two imprisoned white birds. 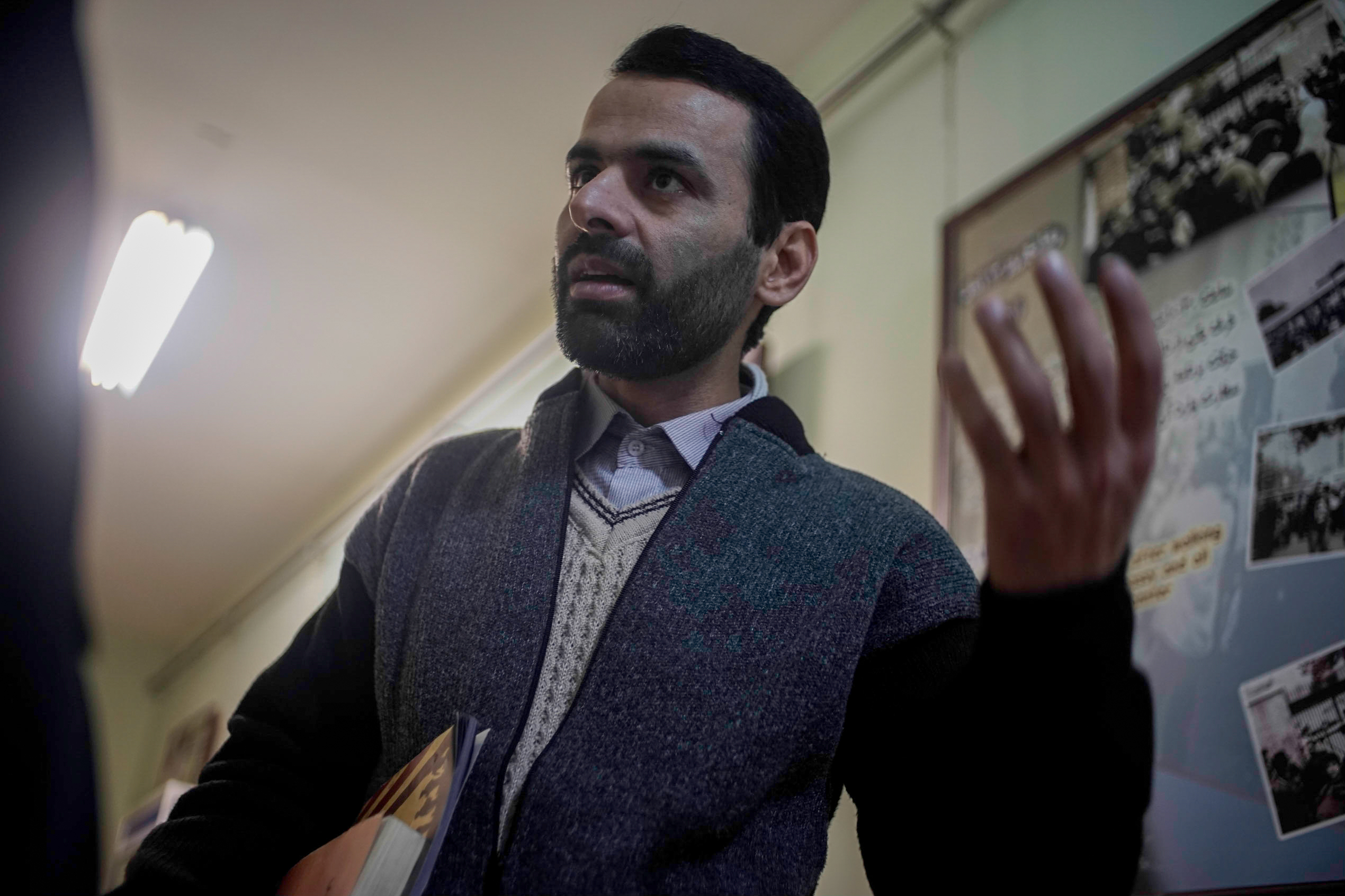 Our tour guide inside the “Den of Spies” museum. 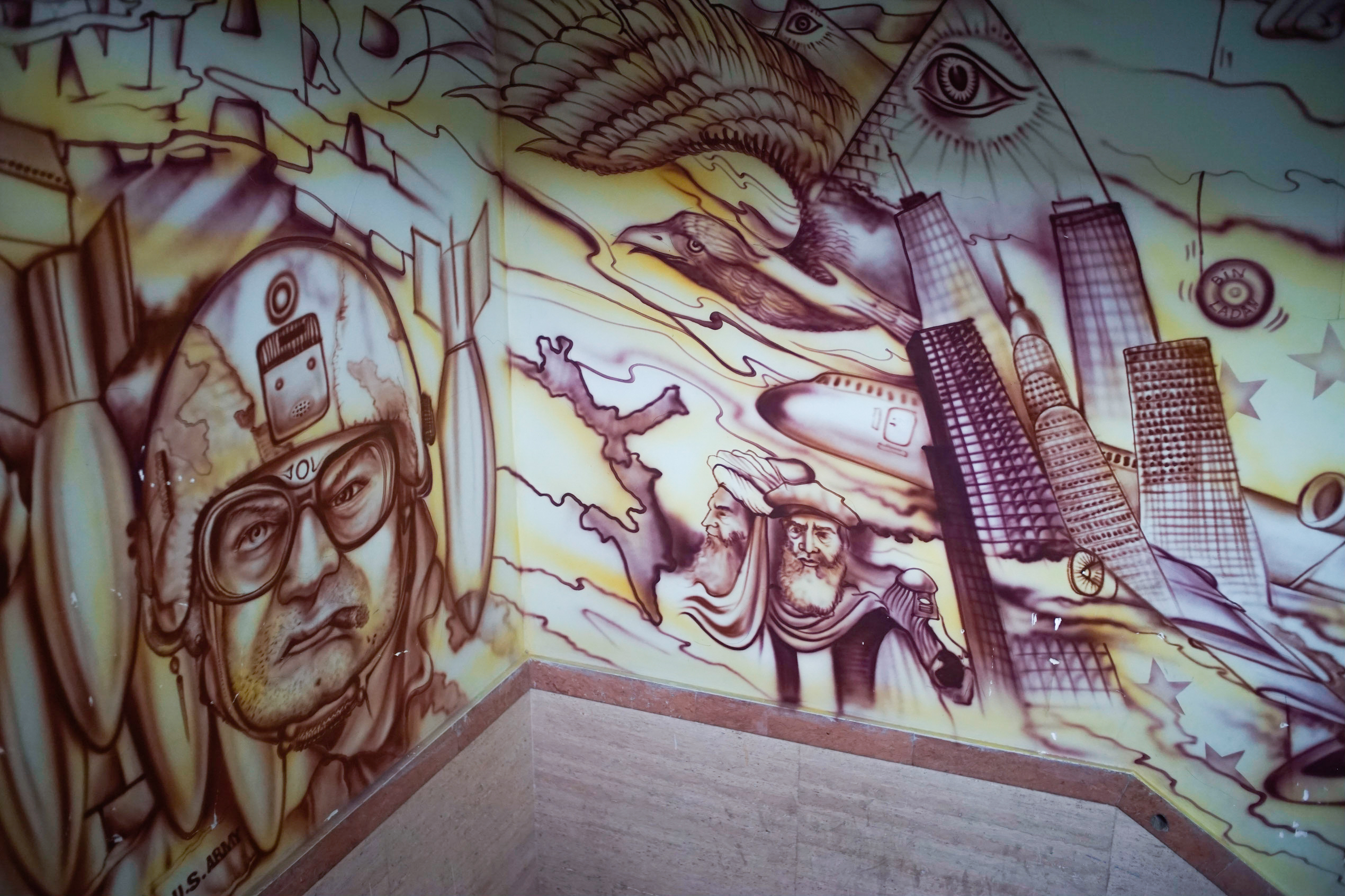 Murals leading up to the museum floor portray a part of the conspiracy theory that 9/11 was engineered by the U.S. and Israel to help justify invading the Middle East. (Our tour guide affirmed his belief in this conspiracy, along with several others.) 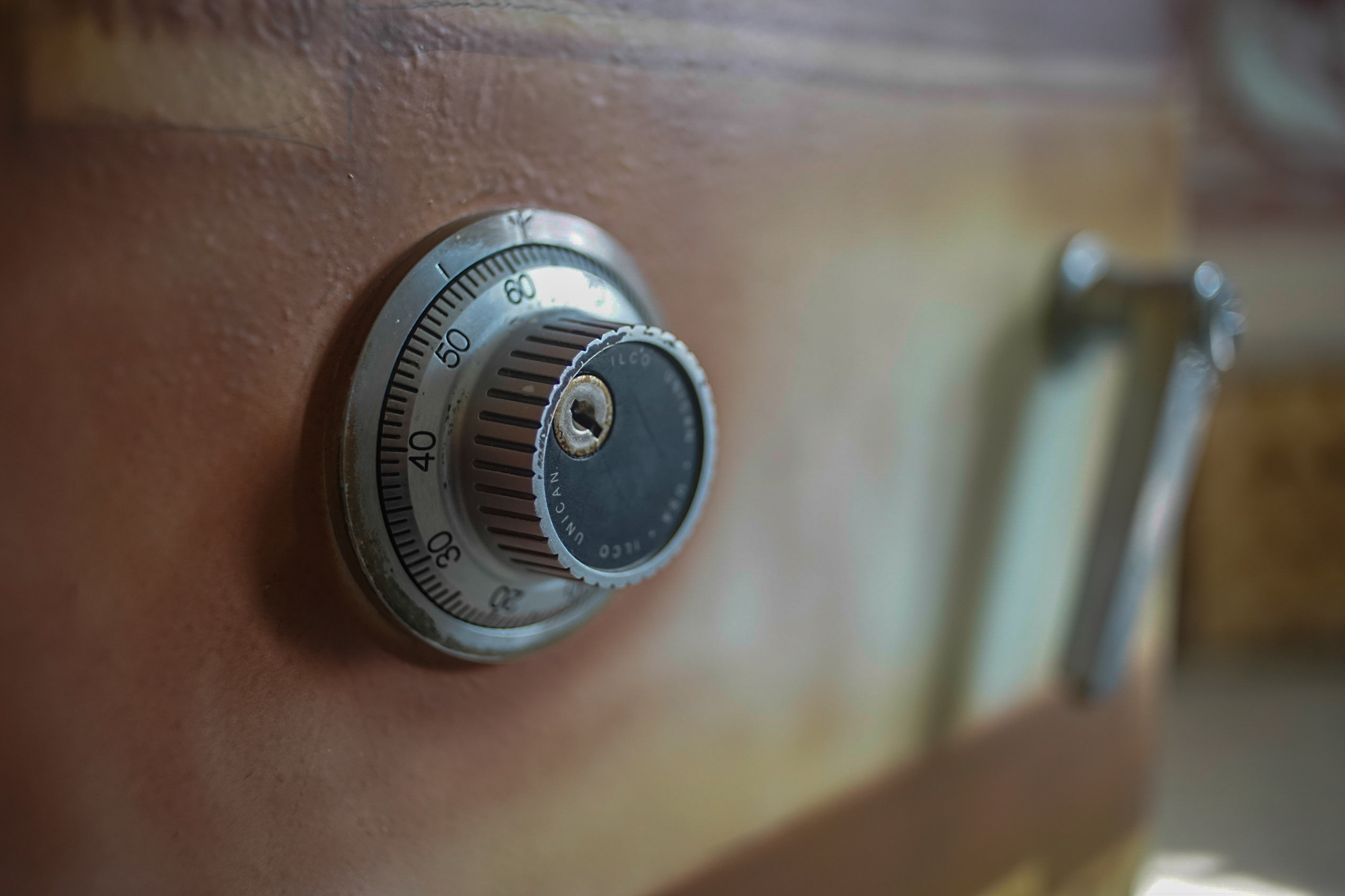 The safe-like metal door serves as the entrance to the museum. 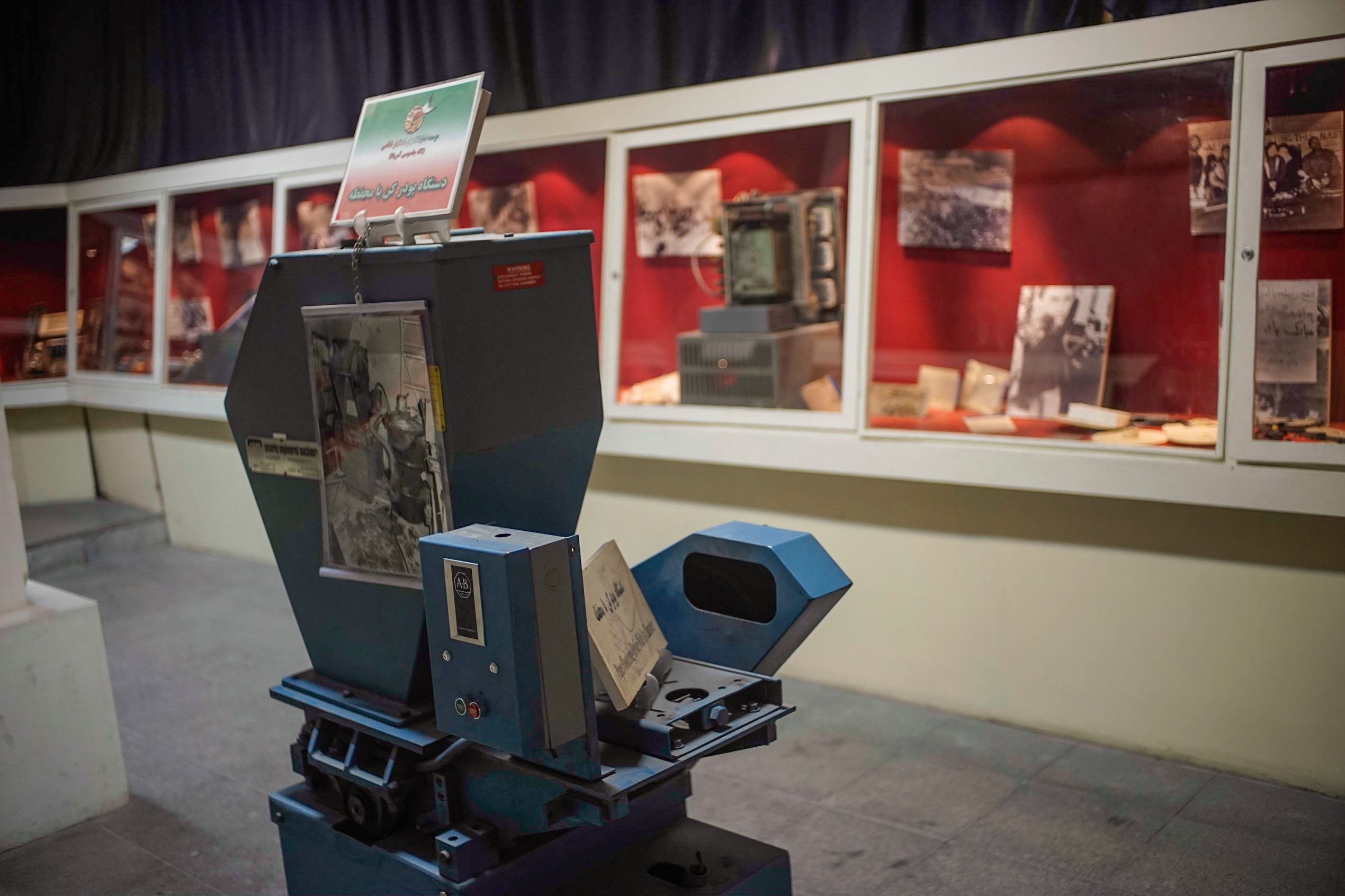 Many of the displays inside the museum are cases like these showing various items of equipment allegedly found inside the embassy by the hostage takers. 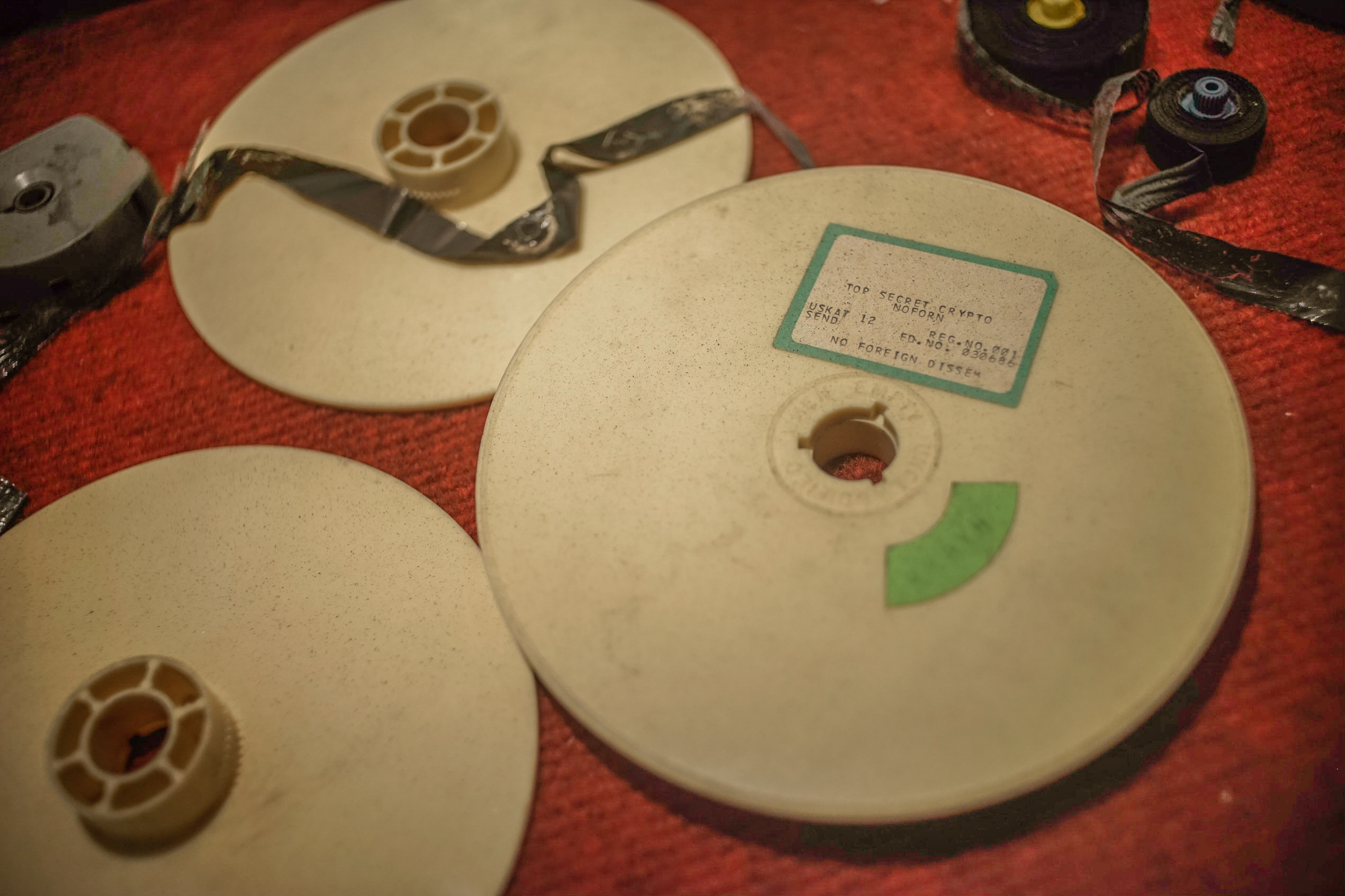 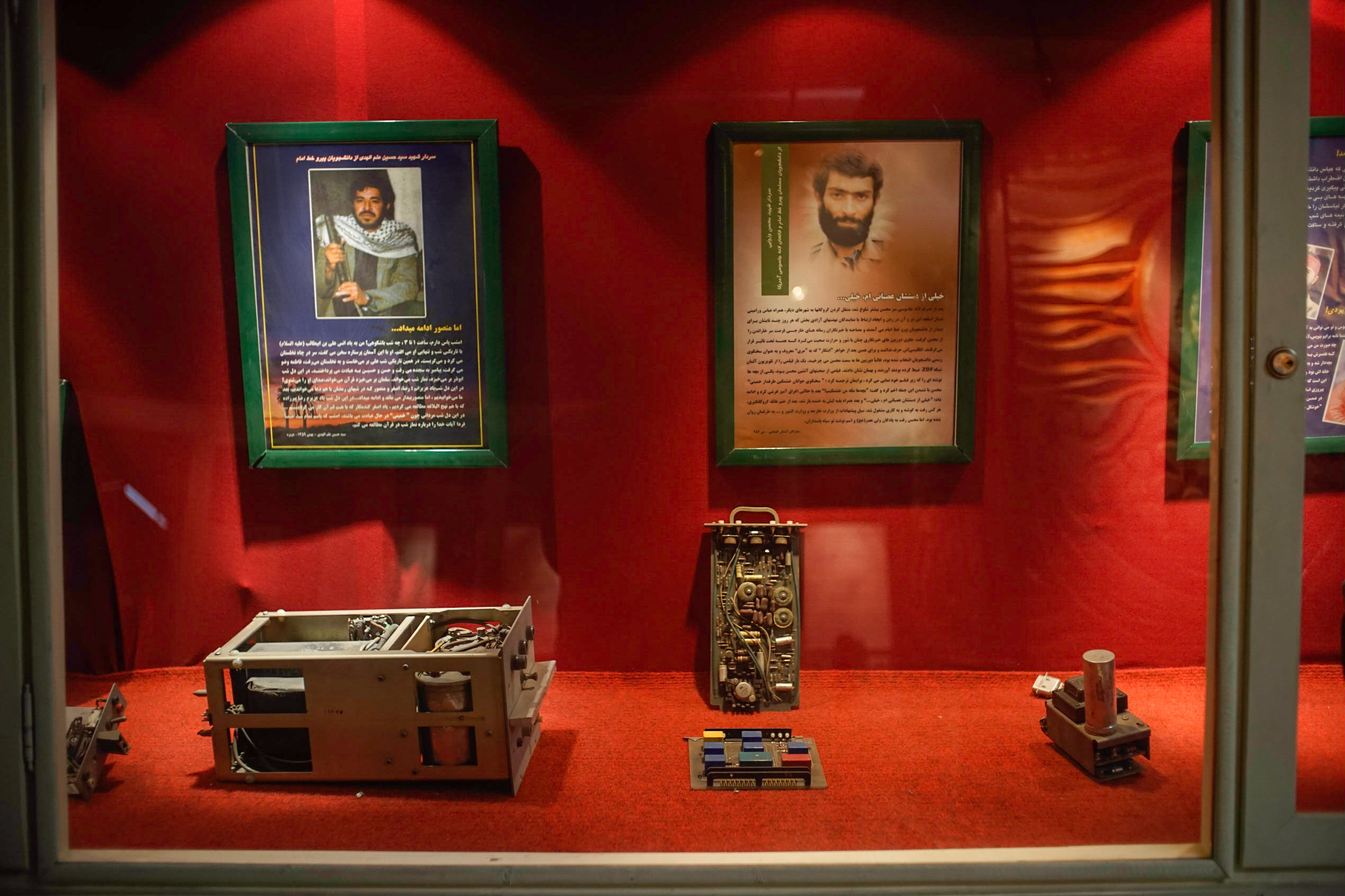 Pieces of of what museum guides claim to be surveillance equipment, along with posters celebrating certain Iranian “martyrs” who, the posters claim, participated both in the takeover of the embassy and then later died fighting the Iraqis during the 1980’s Iran-Iraq war. 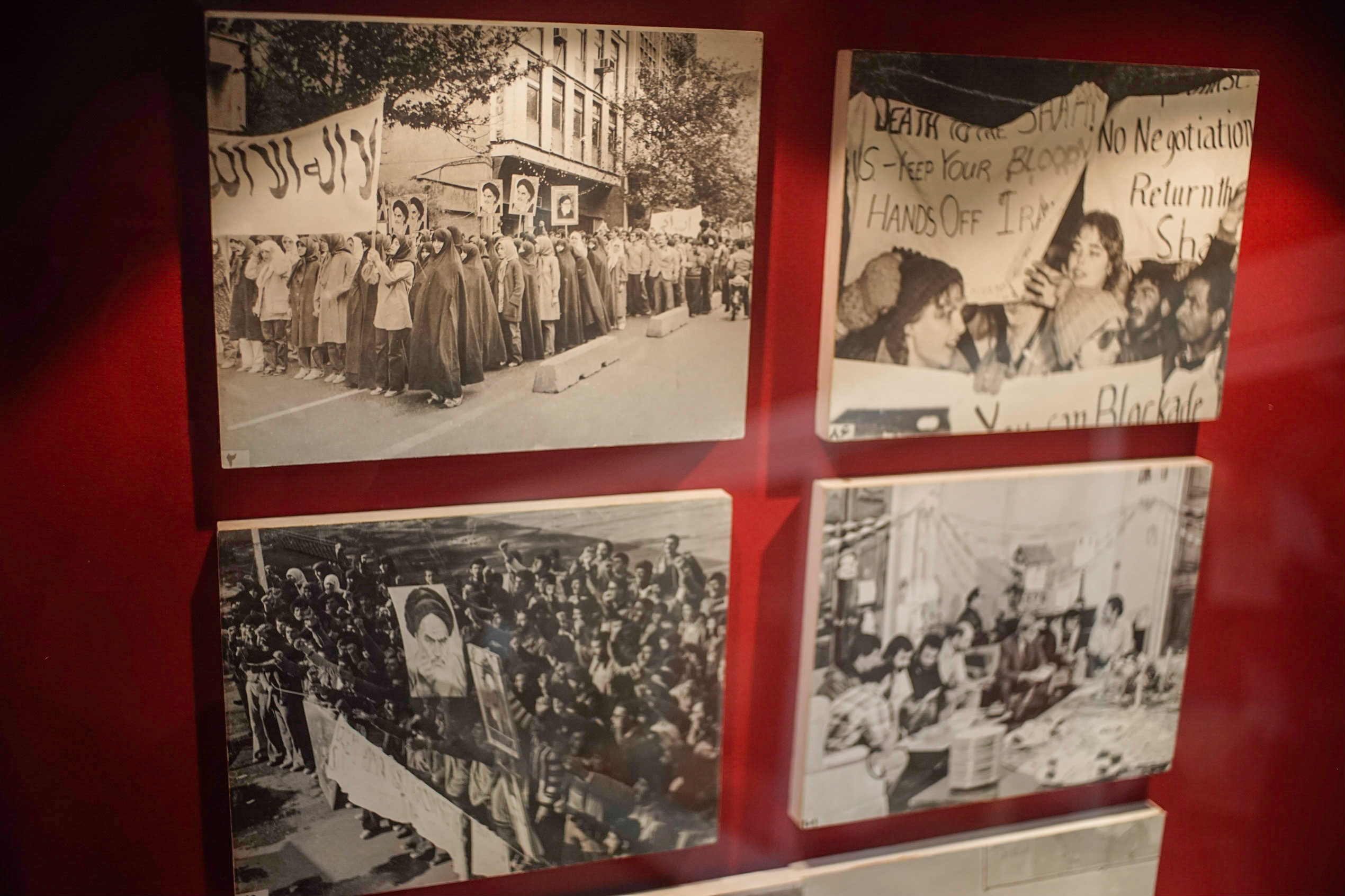 Interspersed throughout the museum are photos like these of Iranian Revolution rallies that took place before and during the hostage crisis. 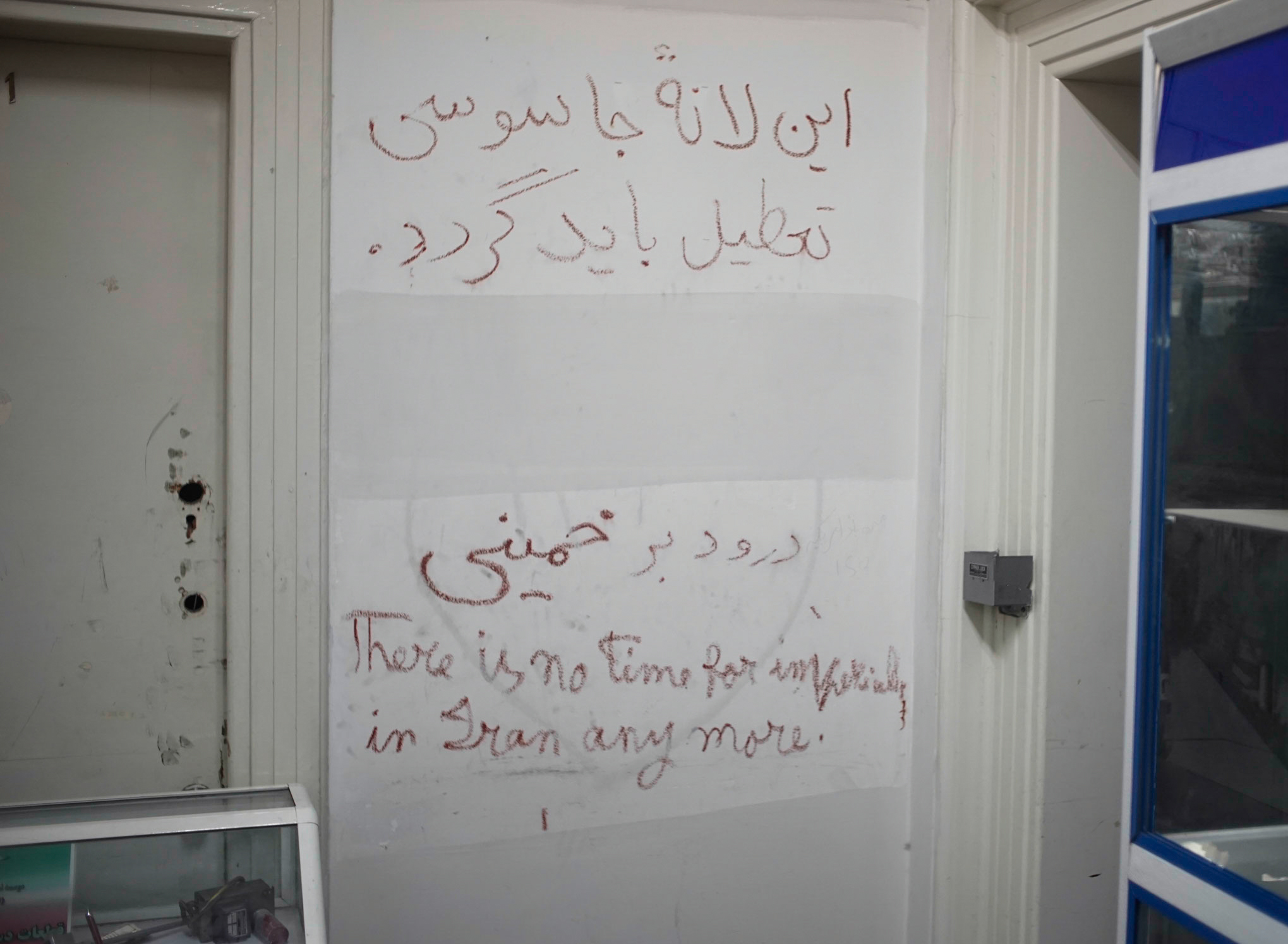 Grafitti on the walls inside the museum. The farsi words at the top read: “This den of spies must be shut.” At the bottom it says “Greetings to Khomeini.” 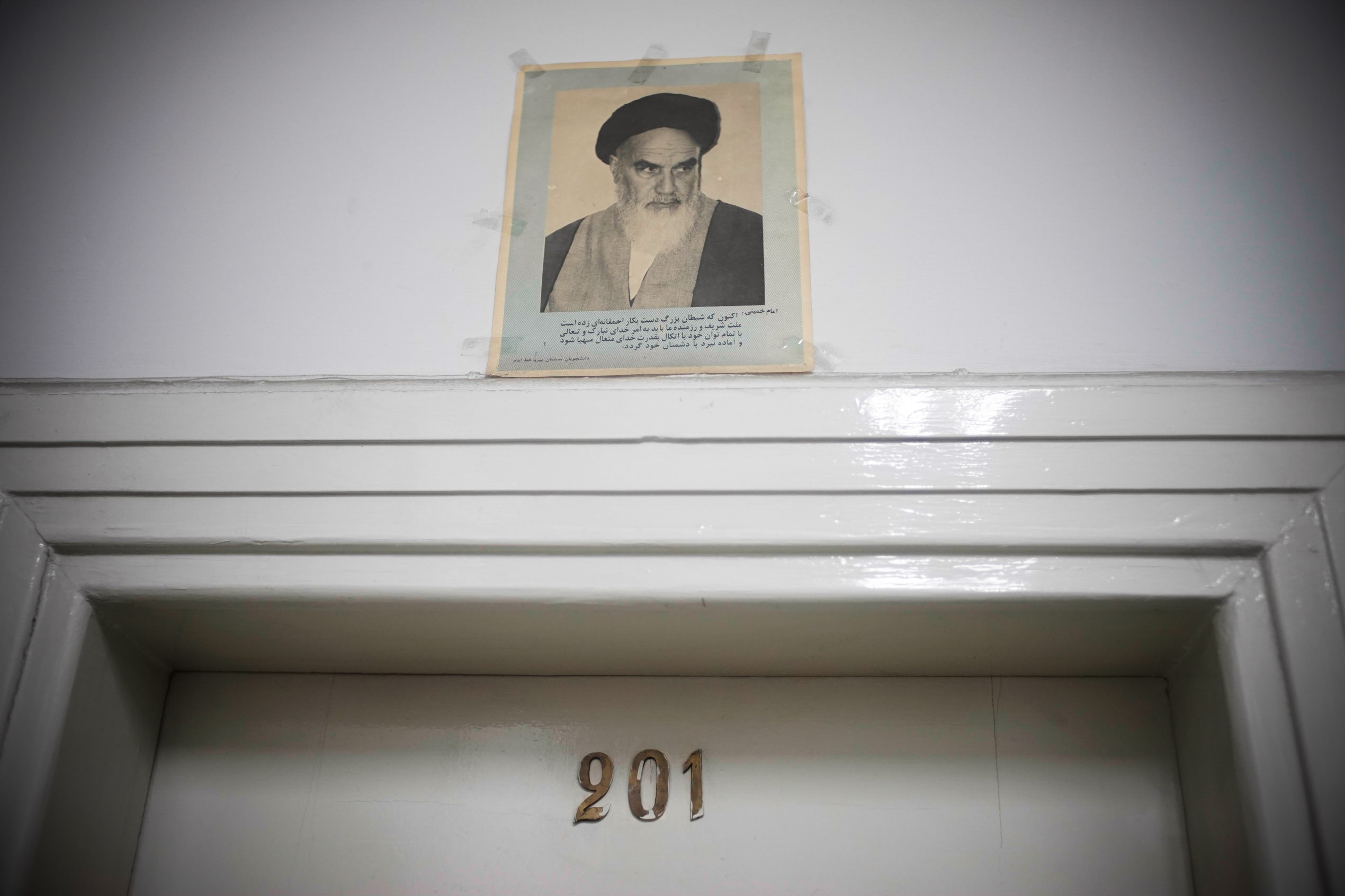 Photo of Ayatollah Khomeini taped above an office door. 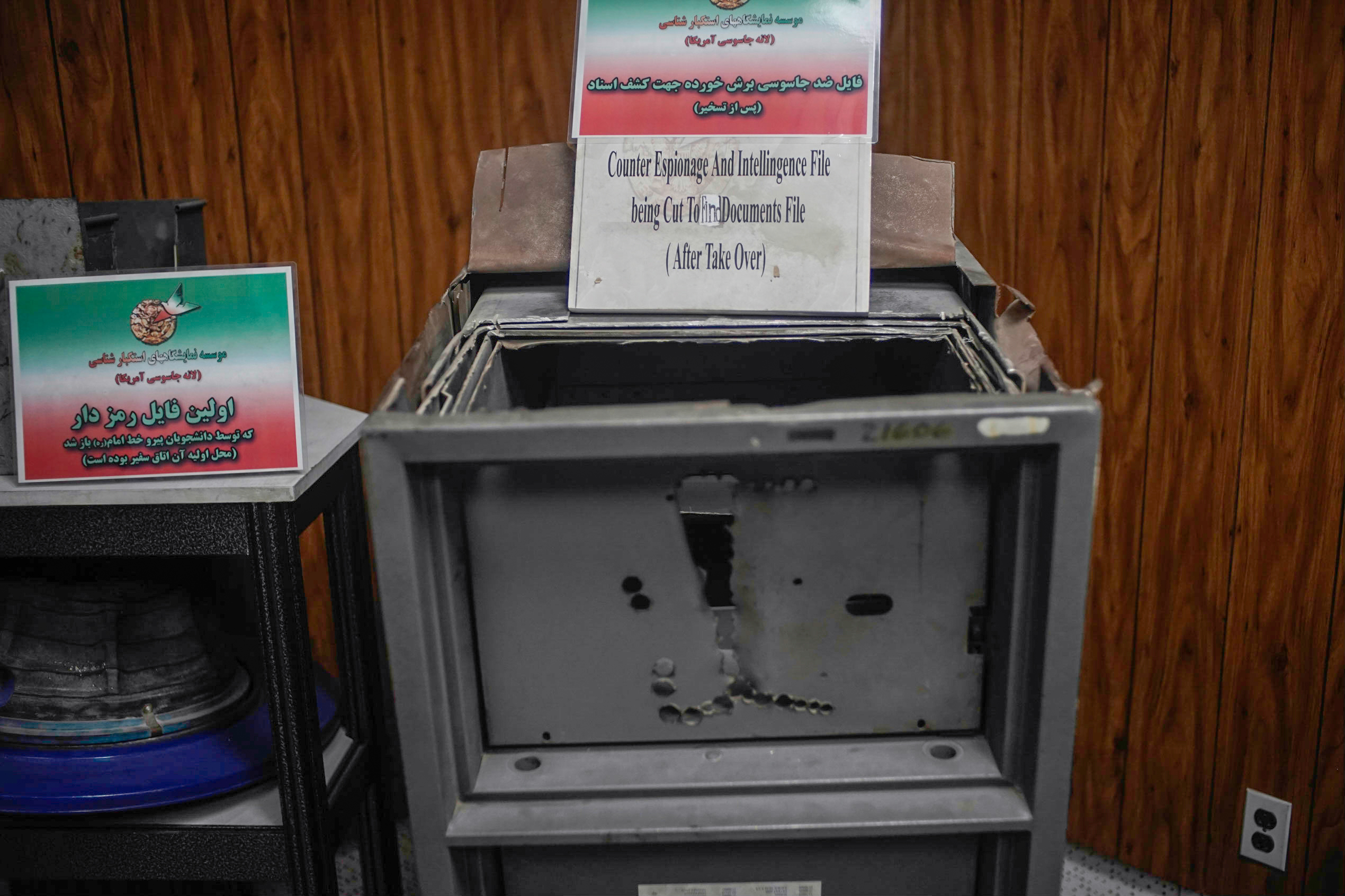 Our tour guide said this file cabinet was allegedly found in Ambassador William Sullivan’s office. He described with great relish how the hostage takers used blowtorches to open the cabinet carefully so as not to burn the contents inside. 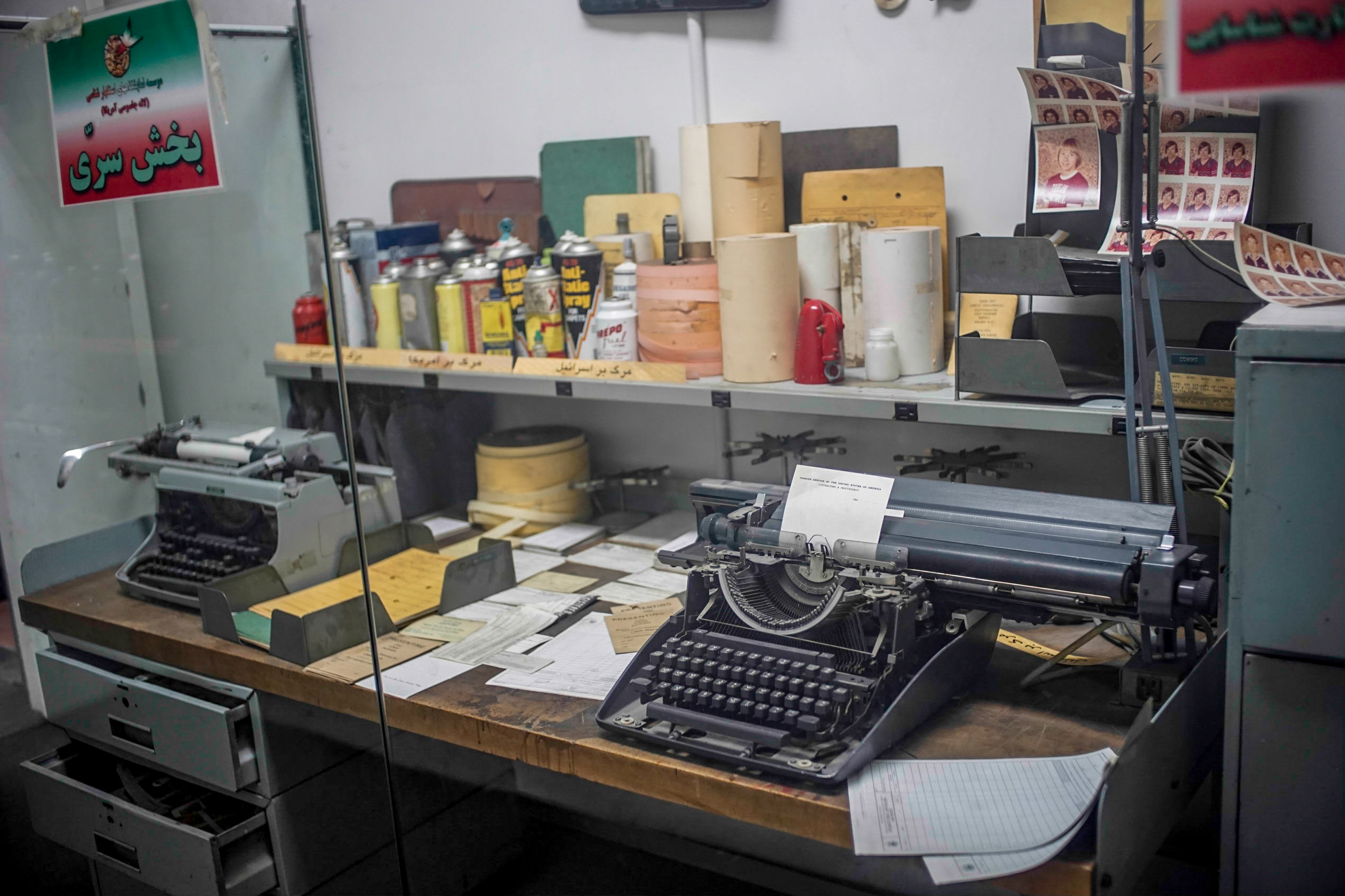 A display case showing what the museum claims was a desk of tools and equipment for making counterfeit documents and passports for spies. As with virtually all the items on display inside and outside the museum, it’s impossible to verify their authenticity. 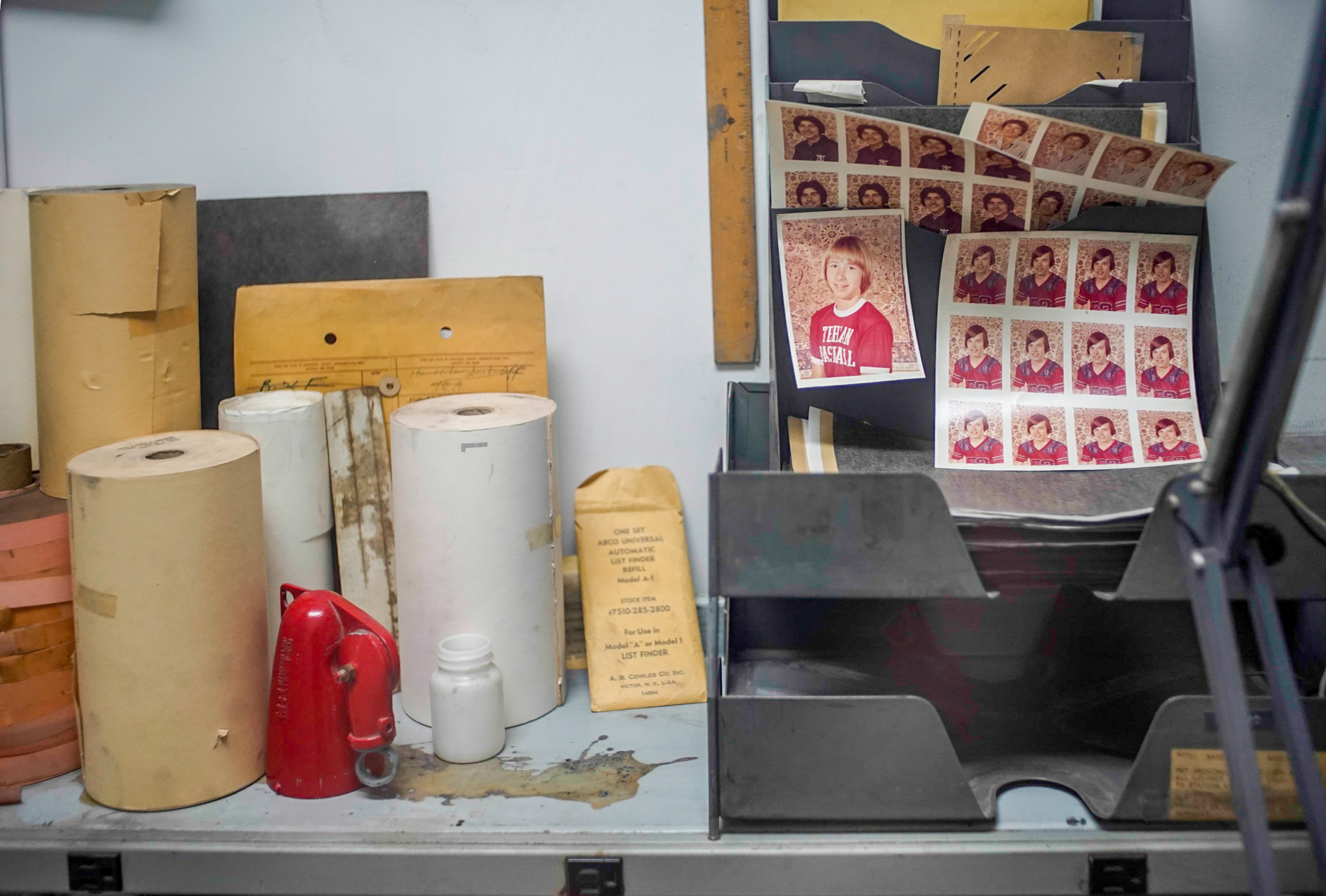 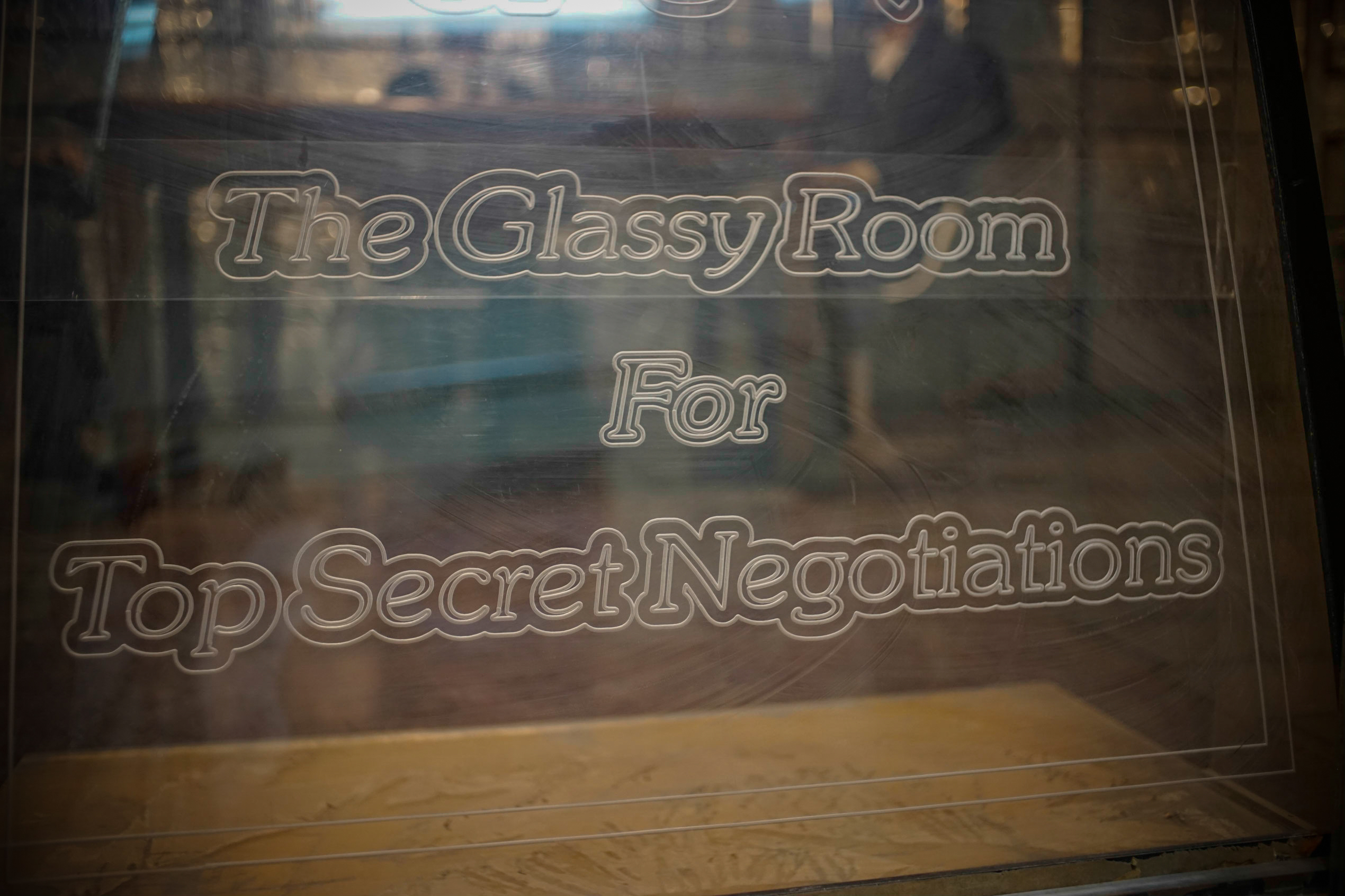 The sign outside one of the stranger exhibits in the museum. 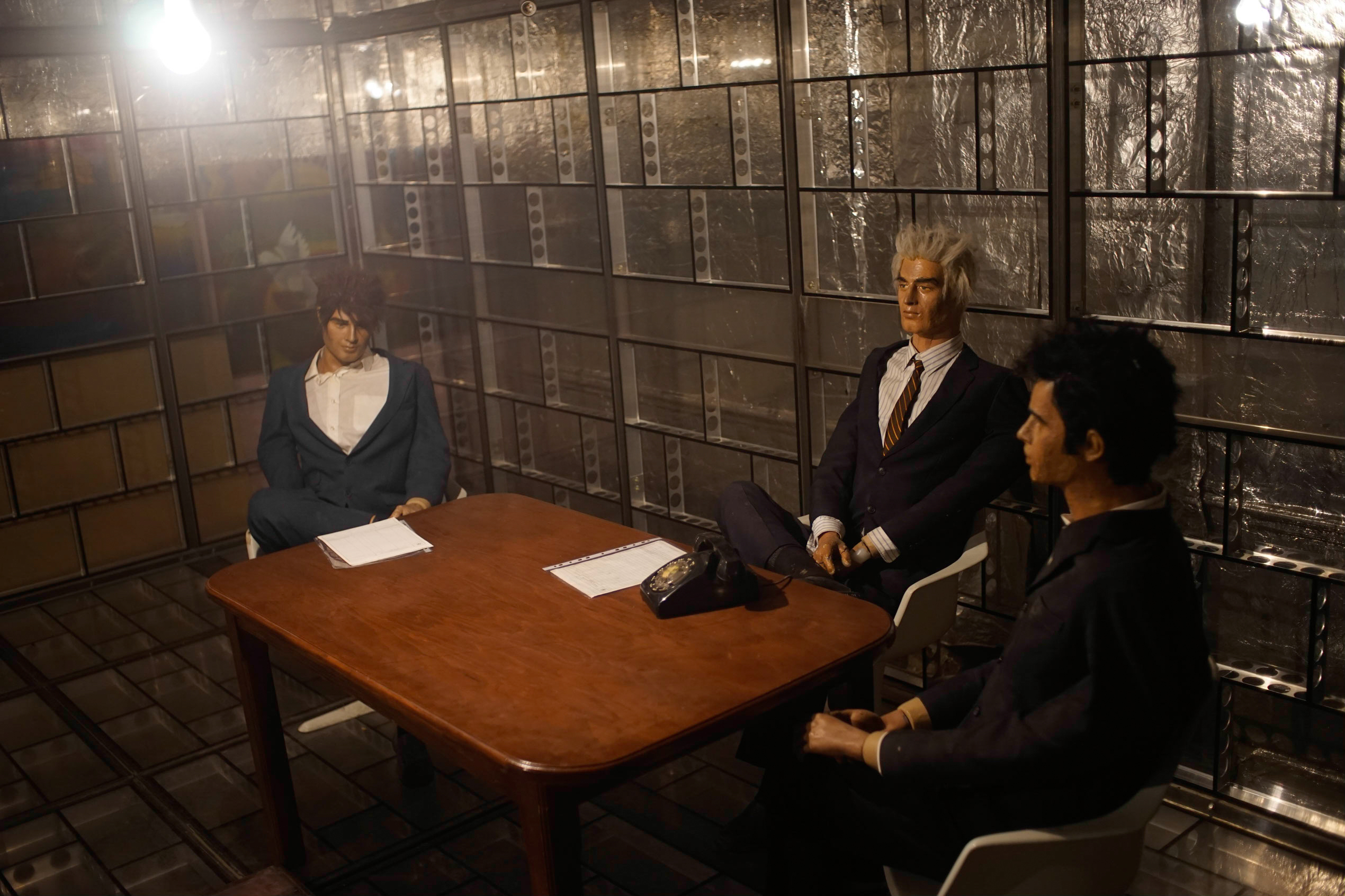 With floors, walls and ceilings of plexiglass and steel, this room, our tour guide alleges, was built so U.S. officials could talk without fear of being overheard by outside surveillance equipment. 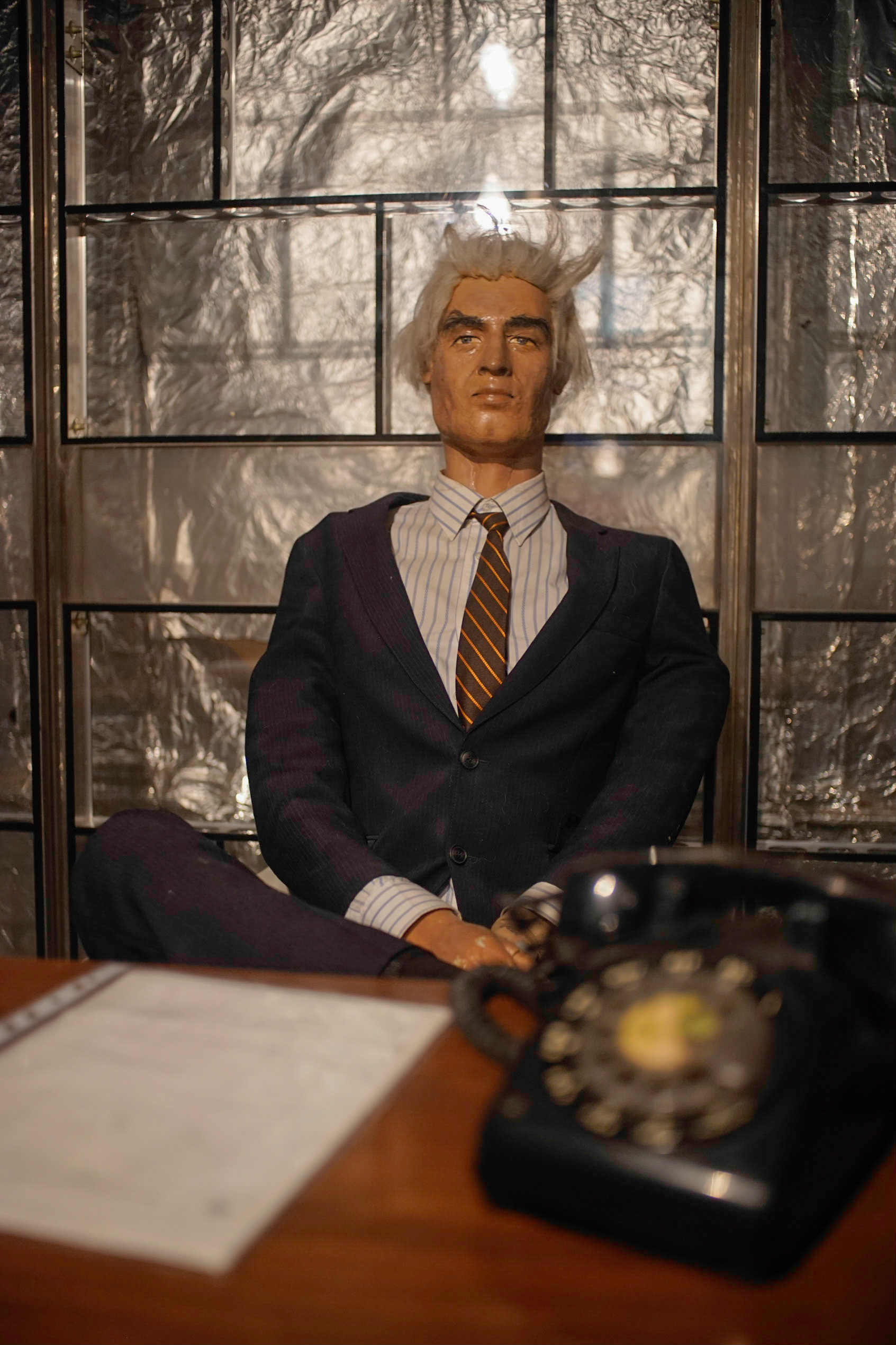 This mannequin is supposed to represent Ambassador William Sullivan, who headed the U.S. diplomatic mission in Iran during the late 1970s. Sullivan wasn’t among the captured hostages; he was back in the United States the day the embassy was seized. 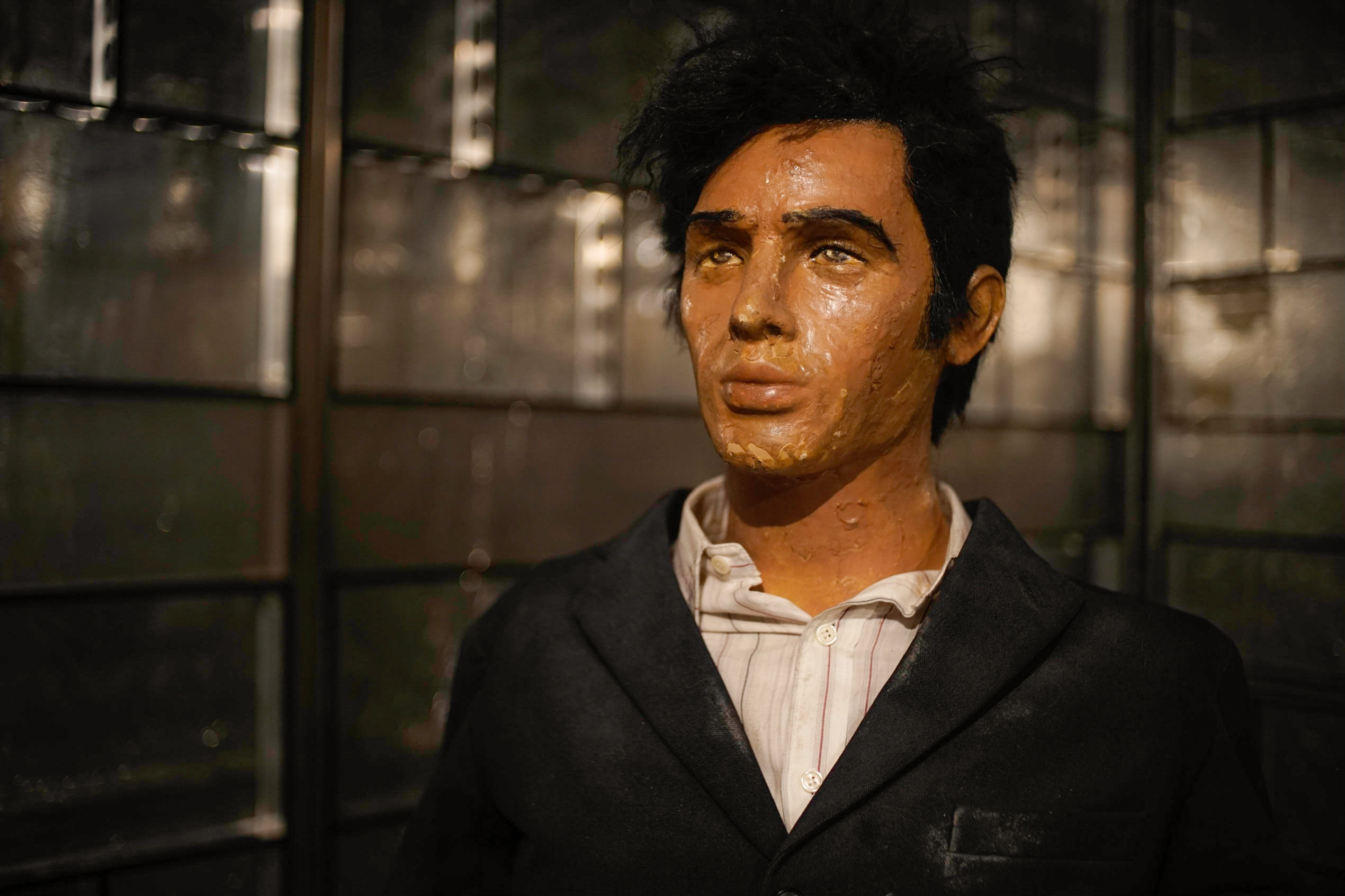 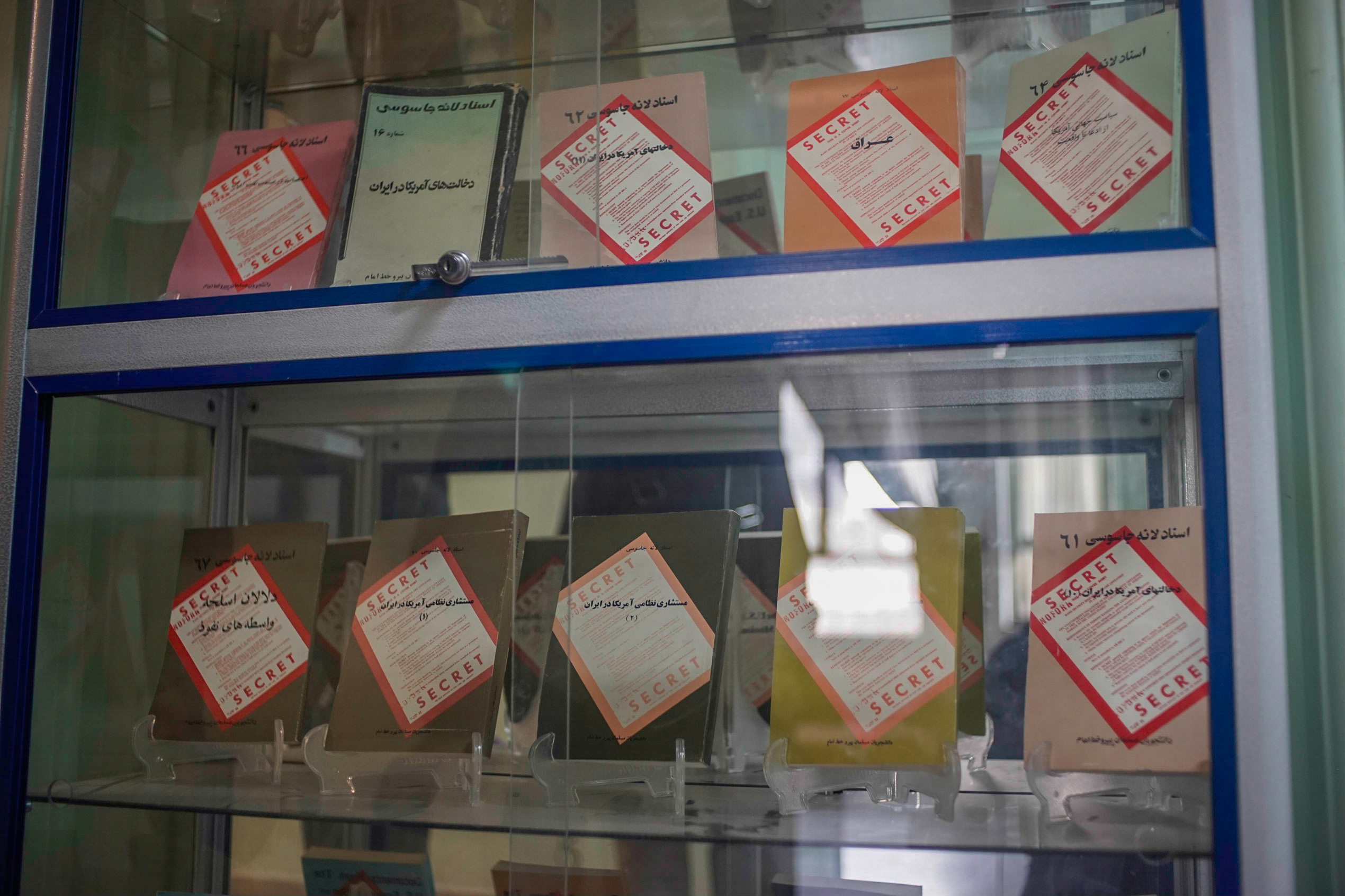 A display case full of books the Iranians published containing what they allege were the various classified documents discovered inside the U.S. embassy in 1979. 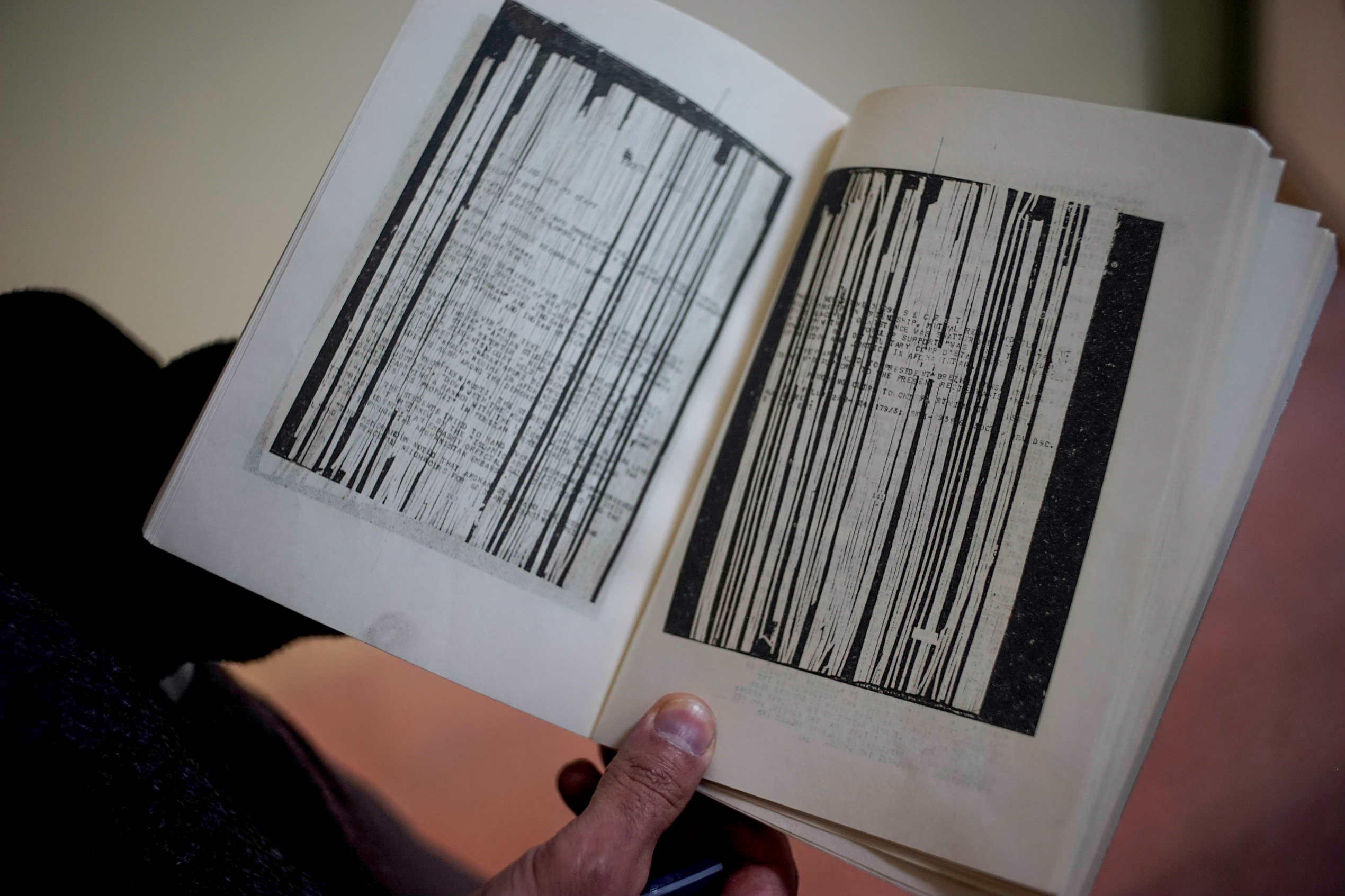 Our tour guide showed us one of the books containing the allegedly classified U.S. documents found in the embassy. Many were supposedly found shredded and were meticulously re-assembled by the Iranians after the embassy was seized — a process also depicted in Ben Affleck’s 2012 film “Argo.”

Left: Murals depicting heroic Iranians and villainous American soldiers line the stairway in the former U.S. Embassy in Tehran, which now partly houses an eerie museum that’s been frozen in time for 35 years. The museum is rarely open to the public, but on a reporting trip last year, PBS NewsHour was able to take a tour. Photos by William Brangham