What can the UK do now after Russia is linked to spy attack?

LONDON — Britain has given Moscow until midnight Tuesday to explain how a Russian-made nerve agent came to poison a former spy in Britain. If no explanation is given, Prime Minister Theresa May says Russia will be hit by “extensive” retaliatory measures.

Foreign Secretary Boris Johnson said U.K. officials are speaking to allies in the European Union and beyond to draw up a “commensurate but robust” response to the attack, which has left Sergei Skripal and his daughter Yulia in critical condition.

Critics say that response was too weak, and claim Britain was reluctant to act because London’s property market and financial sector are magnets for billions in Russian money.

What are Britain’s options now? 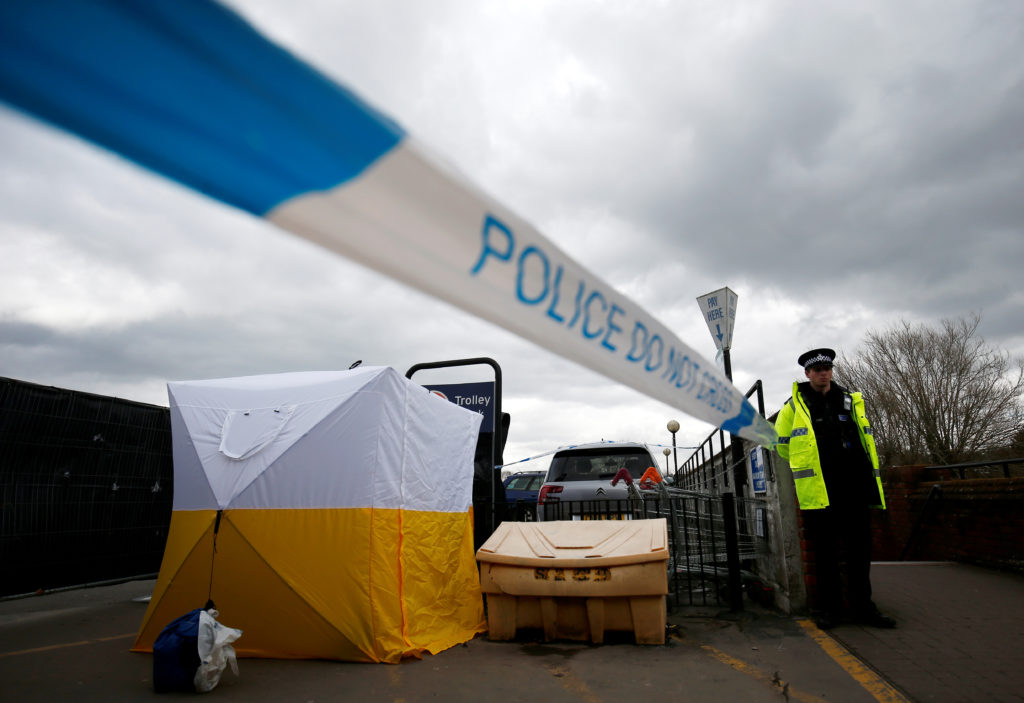 A police officer stands at a cordon placed around a payment machine covered by a tent in a supermarket car park near to where former Russian intelligence agent Sergei Skripal and his daughter Yulia were found poisoned in Salisbury, Britain. Photo by Henry Nicholls/Reuters

Britain is highly likely to expel some Russian diplomats, possibly including Ambassador Alexander Yakovenko. That would almost certainly result in the tit-for-tat expulsion of British envoys in Moscow. While that will further fray already strained diplomatic relations, it would have a limited effect on Russia.

London is a magnet for wealthy Russians, and Britain could seek to stop those suspected of involvement, or close to President Vladimir Putin, from enjoying their money and property in the U.K.

“Russian oligarchs over the last few months have been moving money and liquid assets back to Russia from various places around the world, but you can’t move fixed assets,” said historian Martin McCauley, a former senior lecturer on Russian affairs at the University of London. “So therefore if they’ve got property — and they have a lot of property in London and elsewhere — (May) could in fact impose a freeze or even say confiscate those assets.”

Britain has recently introduced new powers to seize money and property whose origins are suspicious, and is considering adopting a version of the United States’ Magnitsky Act, which allows authorities to ban or seize the assets of individuals guilty of human rights abuses.

The EU — of which Britain remains a member until 2019 — has already imposed sanctions on Russian banks, businesses and officials over Moscow’s invasion of Crimea. Britain is likely to urge the bloc to toughen those measures. But several leading EU nations, including Germany, are wary of antagonizing Russia.

Russia is due to host one of world sport’s biggest events, the World Cup of soccer, in June and July. Johnson has said the U.K. may downgrade its participation by not sending politicians or Prince William, who is president of England’s Football Association.

Some are urging a British boycott of the event, at which England is one of 32 teams competing for the trophy. But that is likely a step too far.

Britain could seek to bolster NATO forces in the Baltic states, where Western troops have been deployed to counter an increasingly assertive Russia.

But Britain will probably stop short of invoking NATO’s principle of collective defense, under which an attack on one is considered an attack on all.

British Housing Minister Dominic Raab said May chose her words carefully when she called the attack “an unlawful use of force” against the U.K.

“The words ‘unlawful use of force’ are different and have a different meaning in international law from ‘armed attack,'” he told the BBC.

So far, Britain has concentrated on strengthening its cyber defenses — but it could take offensive action of its own, possibly targeting Russian websites that generate “fake news.” That would mark an escalation in international cyber-conflict, with unknown consequences.

Britain is also under pressure to revoke the license of state-owned Russian broadcaster RT, which has been repeatedly censured by the U.K. broadcast regulator for a lack of impartiality.

The regulator, Ofcom, said it would wait until May outlines Britain’s response to Russia on Wednesday and then “consider the implications for RT’s broadcast licenses.”

Left: The forensic tent, covering the bench where Sergei Skripal and his daughter Yulia were found, is repositioned by officials in protective suits in the centre of Salisbury, Britain. Photo by Peter Nicholls/Reuters