What Is Al-Qaida in the Islamic Maghreb (AQIM)? 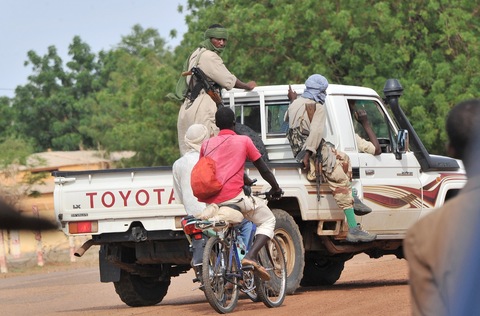 A group of armed Islamists make the rounds in Gao, the biggest city in northern Mali, in September. Photo by Issouf Sanogo/AFP/Getty Images.

Al-Qaida in the Islamic Maghreb (AQIM) is a Salafi-jihadist militant group and U.S.-designated Foreign Terrorist Organization operating in North Africa’s Sahara and Sahel. The group can trace its provenance back to Algeria’s civil war, and has since become an al-Qaida affiliate with broader regional and international ambitions. While many experts suggest AQIM is the primary transnational terror threat in North Africa, the risk it poses to Europe and the United States remains unclear.

AQIM’s activities have garnered heightened scrutiny in recent months, particularly after the group, along with other jihadist factions, expanded its foothold in Mali’s vast ungoverned north. In early 2013, a French-led military intervention has, thus far, halted the southward advance of Islamist insurgents, but analysts warn that the operation may fail unless followed up with a robust contingent of African ground forces. Western nations, including the United States, Britain, and Canada have provided some logistical support, and are weighing further action.

What are the origins of AQIM?

AQIM’s lineage extends back to a guerilla Islamist movement, known as the Armed Islamic Group (GIA), which violently opposed the secular leadership in Algiers in the 1990s. The insurrection began after Algeria’s military regime canceled a second round of parliamentary elections in 1992, fearing an Islamist coalition might win power. In 1998, several GIA commanders became concerned the group’s brutal tactics (e.g. beheadings) were alienating local inhabitants and broke away to found the Group Salafist pour la Predication et le Combat.

GSPC initially drew its support from the Algerian population by vowing to continue the rebellion while avoiding the indiscriminate killing of civilians, but an effective government amnesty program and counterterrorism campaign drove the group into disarray in the early 2000s. Experts say GSPC’s choice to align with al-Qaeda was a change of strategy aimed at retaining the group’s relevance, and improving recruitment and fundraising. “In order to ensure its survival, the GSPC had no choice but to find a new mission that would re-energize its followers,” writes Lianne Kennedy Boudali of the Countering Terrorism Center (CTC) at the U.S. Military Academy.

While GSPC leaders pledged allegiance to al-Qaida multiple times in the early 2000s, the linkage was not publically acknowledged until 2006 by Ayman al-Zawahiri — al-Qaida’s then-second in command. Analysts say the merger, and the new moniker underscoring the “Islamic Maghreb,” symbolized the group’s efforts to move beyond the Algerian conflict and focus on jihadist aspirations in the broader region.

What are AQIM’s objectives?

According to West Point’s center on terrorism, “a rough sketch” of AQIM’s principle objectives includes ridding North Africa of western influence, overthrowing apostate “unbeliever” governments (including Algeria, Libya, Mali, Mauritania, Morocco, and Tunisia), and installing fundamentalist regimes based on Islamic law or Sharia. Experts say AQIM’s narrative blends Salafi-jihadi ideology with North African nuances, including references to the early Islamic conquest of the Maghreb and the Iberian Peninsula. A component of the Salafi-jihadi philosophy is waging war against the “far enemy,” which, in the case of AQIM, is primarily Spain and France. The group has referred to Spain as “our country” and called for its reconquest; likewise, AQIM has declared war on France, which reciprocated the gesture in 2010.

Some U.S. officials have expressed concern that AQIM, which has made territorial gains in northern Mali, may target the United States, much like al-Qaida in the Arabian Peninsula, which has been connected to several U.S. terror plots. In her January 2013 Congressional testimony, Secretary of State Hillary Clinton compared the security risks in Mali to that of Afghanistan. “This is going to be a very serious ongoing threat because if you look at the size of northern Mali, if you look at the topography, it’s not only desert, it’s caves — [it] sounds reminiscent,” she said. “We are in for a struggle. But it is a necessary struggle. We cannot permit northern Mali to become a safe haven.”

Where does AQIM operate?

A successful counterterrorism campaign forced AQIM from its base of operations along Algeria’s Mediterranean coast to the Sahel region that includes Niger, Mauritania, and Mali, where the group has established significant footholds in major cities. AQIM volunteers were also very active in Iraq during the 2003-2011 war with the United States, often performing suicide bombings.

Unlike other al-Qaida affiliates, AQIM has not yet been able to execute attacks on Europe or domestic U.S. targets. However, arrests of suspected terrorists with ties to AQIM have been made throughout Europe in the United Kingdom, Germany, Italy, Portugal, and the Netherlands. Some analysts point to thwarted attacks and arrests of AQIM-linked terrorists as evidence the group is capable of attacks in Western Europe.

In 2012, the U.S. State Department expressed concerns that AQIM was networking (BBC) with other prominent terrorist groups in the region, including Nigeria’s Boko Haram, Somalia’s al-Shabaab, and Yemen’s AQAP. The September 2012 assault on the U.S. consulate in Benghazi has also raised concerns about AQIM’s presence in Libya.

What are the group’s numbers and leadership?

AQIM is estimated to have several hundred members, but precise data is unavailable. Most of AQIM’s major leaders are believed to have trained in Afghanistan during the 1979-1989 war against the Soviets as part of a group of North African volunteers known as “Afghan Arabs” that returned to the region and radicalized Islamist movements in the years that followed. The group is divided into “katibas” or brigades, which are clustered into different and often independent cells. AQIM’s top commanders, which are all Algerian, “may be rivals as much as comrades or they may operate relatively autonomously,” according to the non-partisan Congressional Research Service.

The group’s top leader, or emir, since 2004 has been Abdelmalek Droukdel, also known as Abou Mossab Abdelwadoud, a trained engineer and explosives expert who has fought in Afghanistan and has roots with the GIA in Algeria. It is under Droukdel’s leadership that AQIM declared France as its main target. One of the “most violent and radical” AQIM leaders is Abdelhamid Abou Zeid, according to counterterrorism experts. Abou Zied is linked to several kidnappings and executions of Europeans in the region.

Mokhtar Belmokhtar, a founding member of AQIM, reportedly broke with the group in late 2012 and created his own organization known as the Signed-in-Blood Battalion. He is believed to have masterminded the deadly hostage-taking raid on a natural gas facility in eastern Algeria in January 2013.

What are AQIM’s tactics?

AQIM employs many conventional terrorist tactics, including guerilla-style raids, assassinations, and suicide bombings of military, government, and civilian targets-but has historically avoided “force-on-force” encounters with military. Perhaps the group’s most brazen attack was the December 2007 bombing of U.N. offices in Algiers, which killed dozens. The kidnapping-and sometimes execution-of aid workers, tourists, diplomats, and employees of multinational corporations is increasingly a prominent tactic. Indeed, AQIM has “largely been relegated to lower-level activities in the Sahel” in recent years, according to the Center for Strategic and International Studies.

The group raises money through an array of criminal activity including kidnapping for ransom (KFR) and the trafficking of arms, vehicles, cigarettes, and persons, according to the U.S. State Department. Kidnappings not only raise funds, but also support prisoner exchanges and discourage foreign enterprise in the region. In October 2012, David Cohen, Under Secretary for Terrorism and Financial Intelligence at the U.S. Treasury Department, cited KFR as “the most significant terrorist financing threat today,” and noted that AQIM “has likely profited most” from the activity.

Analysts also say that AQIM is heavily involved in the smuggling of narcotics, providing a vital Sahel way-station between suppliers in Latin America and the European market. In July 2012, the head of U.S. Africa Command, Gen. Carter Ham, described AQIM as al-Qaida’s “wealthiest affiliate” (Reuters).

AQIM and other Islamist groups, like Ansar al-Din, initially aided the semi-nomadic Tuaregs-an historically disenfranchised minority ethnic group-that launched a rebellion in early 2012 against Mali’s government and captured control of the country’s sparsely populated north. But they have since marginalized Tuareg forces and begun implementing a severe brand of sharia law in the breakaway northern territory. According to the U.N., the jihadist influx has been particularly brutal for women, many of whom have been raped or forced into marriage and prostitution.

Mali, a predominantly Muslim, landlocked West African nation that straddles the arid latitudes of the sub-Saharan Sahel, achieved its independence from France in 1960, and had been celebrated by western-aid donors as a modest democratic success story over the past decade. However, the future political stability of the country is in doubt given the success of the insurgency and the power vacuum created by a subsequent military coup deposing President Amadou Toumani Toure in March.

Though there is a transitional civilian government that assumed power with the military’s consent in early April, AQIM and affiliated groups may leverage the political uncertainty to plot attacks on western targets in the region and abroad, some analysts fear. The conflict has generated a humanitarian crisis, displacing over 1.5 million people and exacerbating an already daunting regional food emergency. The region faces its most significant security challenge since the Algerian civil war, writes Derek Henry Flood for CTC, noting that “the Sahel has transformed from a rear logistical base to the locus of jihadist activity in North and West Africa.”

Prior to the March 2012 coup, the U.S. State Department described Mali as “a leading regional partner in U.S. efforts against terrorism,” and continues to stress that “the best strategy for dealing with AQIM remains working with regional governments to increase their capability, foster regional cooperation, and counter violent extremism.”

The primary vehicle for these efforts has been the Trans-Sahara Counterterrorism Partnership, an interagency (civilian and military) program established in 2005 that partners with over a half dozen countries in the Maghreb and Sahel. According to the U.S. Government Accountability Office, the Partnership has faced challenges from the outset, including the lack of a comprehensive strategic design that goes beyond traditional bilateral aid. Mali is the third partner country, after Mauritania and Niger, to experience a military coup since 2008.

In December 2012, the UN Security Council authorized a one-year military peacekeeping mission in Mali, and a regional coalition of West African states (ECOWAS) subsequently pledged thousands of troops to retake the country’s north from Islamist insurgents. However, a rebel advance southward in January, prior to the deployment of U.N. forces, prompted Bamako to request immediate military assistance from France. While a French-led intervention have thus far repelled the Islamist advance, analysts say regional forces are required for the operation’s success.

The United States has pledged logistical support, including the sharing of intelligence, and is considering sending a small detachment of unarmed drones. As of July 2012, the Pentagon had fewer than 5,000 personnel, including civilians, on the entire African continent.