Council on Foreign Relations: What Should U.S. Policy Be in Syria? 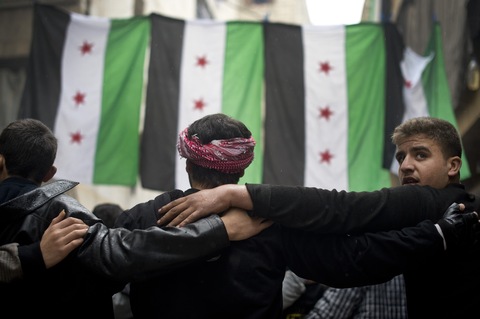 Rebel fighters take part in a demonstration against the Syrian regime in Aleppo on Dec. 7. Photo by Odd Andersen/AFP/Getty Images

Syria’s Vice president Farouk al-Sharaa told a Lebanese-based newspaper in an interview published Monday that “We are not in a battle for the survival of an individual or a regime,” seeming to suggest that President Bashar al-Assad might not have a role in Syria’s future, and that the top leadership has a difference of positions on whether to end the civil war through military or political means. The following post is from the Council on Foreign Relations.

Debate is intensifying over how the United States should respond to Syria’s escalating crisis. In recent days, Washington has formally recognized the Syrian opposition coalition, but thus far has refrained from providing rebel forces with direct military support. CFR’s Max Boot says Washington needs “to get off the sidelines” and build a coalition of allies to enforce a Libya-style no-fly zone. The New American Foundation’s Brian Fishman notes U.S. military intervention is unlikely to produce a stable Syrian government post-conflict, and recommends a patient approach of training and modestly arming rebels. CFR’s Ed Husain says Washington should avoid inserting itself directly in the twenty-one-month old conflict, a move that would jeopardize the credibility of the rebellion. The Washington’s Institute’s Andrew Tabler says the United States should transition from its covert “light footprint” support for armed Syrian opposition to overt outreach to non-extremist groups in the Free Syrian Army, including the provision of arms.

The beginning of wisdom on Syria is the realization that the current policy–which consists of calls for Bashar al-Assad to step down coupled with a small amount of humanitarian and non-lethal assistance to his long-suffering people–isn’t working. The war continues to rage on, more cruel than ever (at least 40,000 killed so far), and it is spilling over into neighboring states (refugee flows, cross-border firing into Turkey and Israel, and increased instability in Lebanon), while in Syria itself, jihadist groups appear to be growing in strength.

It is high time for the United States to get off the sidelines as allies such as Turkey and Israel, Britain and France, Saudi Arabia and Qatar have been urging it to do. As a first step, Washington should assemble a coalition to enforce a no-fly zone over Syria. The United States would have to take the lead in dismantling Syrian air defenses, but could then hand off the enforcement of the NFZ to allies, as was the case in Libya. (Even if the United States and its allies are not willing to send aircraft over Syria, a more limited NFZ could still be enforced by Patriot batteries in Jordan and Turkey.)

This would instantly ground Assad’s most potent weapon–he has been using airpower heavily, especially in the north, where he has lost control of the countryside. It would also interdict Assad’s main supply artery from Iran–flights over Iraq. If the Syrian air force is grounded, rebels will be able to establish liberated territory from the Turkish border to Aleppo. Eventually, coalition aircraft could provide close air support for rebel operations, with air strikes being called in by coalition commandos on the ground.

The United States should also provide weapons directly to the rebels. This would not only help to shorten the war, but increase U.S. influence with the rebel forces. Washington could provision the supply of weapons on pledges from rebel groups to work together and respect democratic principles in a post-Assad Syria. Even more importantly, training camps could be established in liberated territory to provide cohesion and unity of command to scattered rebel forces.

While all this military activity is going on, U.S. diplomats and intelligence officers should be working to buttress the provisional government that will take power after Assad’s downfall. It is vitally important to start planning now for a post-Assad Syria if it is to avoid becoming another Somalia–or even another Libya.

There will be no happy ending in Syria. In fact, the most likely scenario in the rebellion against Bashar al-Assad is no ending at all, rather, protracted war between various Arab Syrian rebel factions, the increasingly tattered–but still capable–remnants of the regime, Kurdish factions, and jihadi organizations.

U.S. military intervention could, of course, tip the scales against Assad’s regime, but it is unlikely to facilitate a stable government in the aftermath of regime collapse. Advocates of overt intervention have yet to offer a credible scenario for stability in Syria after Assad’s ouster, yet they propose deep U.S. political commitment to a country that is likely to face years of civil war even if Assad is killed or abdicates. This is unwise.

A better course of action is to provide training and small amounts of weapons to cooperative Syrian rebel groups, pressure the Assad regime diplomatically, and prepare for more forceful military engagement to secure or destroy Syria’s stockpiles of chemical weapons, which must not be transferred to Lebanese Hezbollah or fall into the hands of Syrian rebels. This course of action is also unlikely to produce a positive outcome in Syria, but it avoids tying the United States to another costly Middle Eastern intervention with no clear endgame.

Advocates of intervention in Syria sometimes point to Bosnia and Libya, where U.S. intervention helped staunch civil war and overthrow a dictator. But all of the negative effects of U.S. intervention in Libya will be worse in Syria, and those analogies ignore two more relevant historical examples: Lebanon and Iraq. Both neighbor Syria, are more similar demographically, and underscore the costs and risks of U.S. military intervention in civil wars in the Middle East.

The challenge in Syria is particularly acute because of Jabhat al-Nusrah, an al-Qaeda-affiliated militant network that has become a major player in the Syrian rebellion. Advocates of intervention argue that a U.S. presence would check the growth of al-Qaeda in Syria. This is fantasy, which is encouraged by well-meaning and basically righteous Syrian factions hoping for U.S. help. While the United States’ passive approach likely has meant that various noxious Islamist militias have received support from Gulf states, it is nonetheless true that the specter of direct U.S. military intervention in the Middle East has been, is, and will be al-Qaeda’s most successful recruiting tool.

Overthrowing an Iranian-allied, terrorist-supporting, autocrat-like Bashar al-Assad is obviously a laudable goal. But a quiet, patient approach is a better and far less risky way to get there than overt military action.

Ending Assad’s days in Damascus would not mark the end of Syria’s conflict, but a new beginning. If the United States were to become directly involved in toppling the regime, it would also mean a commitment to helping build a new Syria amid the bitter sectarian, ethnic, and regional conflicts playing out inside the country. After recent forays into similar terrain in Afghanistan and Iraq, the United States cannot afford (politically or economically) to insert itself directly in yet another bloody conflict.

Instead, U.S. allies Turkey, France, Britain, and the Gulf countries should lead efforts to oust Assad and build a new Syria. Their reluctance for greater involvement, however, is the surest warning for the United States to stay one removed from Syria.

Washington should continue to help the Syrian opposition by non-lethal means: aid, training, better communications devices, political recognition, facilitation, and strategic guidance. But the opposition’s triumph over Assad must be theirs alone for the sake of their credibility in the next battle: rebuilding Syria. Help from Turkey or the Gulf does not taint the opposition in the way that U.S. military intervention would.

Those who wish to weaken Iran by removing Assad are pursuing a dangerous line of thought. Iran has allies in Hezbollah, Gaza, Iraq, and Bahrain’s opposition. Is the United States going to interfere with these forces as well? And at what cost? Has Washington learned nothing from its mistakes in Iraq? Iran is a standalone problem–the road to countering Tehran’s mullahs’ ambitions does not go through Damascus.

Matters in Syria will get worse before they get worse. Indeed, this conflict will last several years. There is no appetite yet for compromise and a political settlement on either side. This is an Arab fight to the bitter end, with war crimes being committed on both sides. The United States will be more effective and smarter by leading through Europe and its regional allies.

Andrew Tabler, senior fellow in the Program on Arab Politics, Washington Institute for Near East Policy:

For nearly a year, Washington has found new and creative ways of not dealing directly with armed groups in Syria, preferring instead to engage with civilians in exile in the Syrian National Council and its larger successor, the Syrian Opposition Coalition. But with the rapid advances of the various groups comprising the Free Syrian Army, it is now clear that those who are taking the shots at Assad will be calling the shots as he exits the scene.

The only way to help ensure that civilians play a leading role in post-Assad Syria–to reverse growing anti-American sentiment due to the perception that Washington stood by and did very little while Syrians were slaughtered, and to help the United States shape the political outcome–is for Washington to transform its covert “light footprint” policy of engaging armed groups through Qatar, Saudi Arabia, and Turkey into an overt political outreach to non-extremist groups in the Free Syrian Army.

Once written off as a cyber-opposition force, the groups comprising the Free Syrian Army have made dramatic gains against the Assad regime’s forces, driving them out of large swaths of now disputed territory in the east and north of the country. FSA groups, as well as jihadist groups that fight alongside the FSA but are not a part of it, have overrun regime weapons depots from which they have acquired SA-7 shoulder-fired antiaircraft weapons. The Syrian armed opposition is now shooting down regime combat aircraft in greater numbers, leading to concerns that an Assad regime desperate to halt the rebels’ advance may resort to chemical weapons. Regardless, the armed opposition is likely to soon transform this disputed territory into “liberated” territory: areas of the country where the regime can no longer project its power in any form.

Given the fragmented nature of the Syrian armed and civilian opposition alike, Washington will soon have to deal with a Syria, or perhaps Syrias, ruled by multiple groups with multiple leaders. The best way to influence this emerging leadership is to abandon the dream of dealing only with civilians and to engage armed groups as well. To accomplish this, Washington needs to determine clear criteria for targeting the groups–such as extremists–the United States will not deal with, engage the remainder to find out their immediate needs, and develop a method for providing this assistance.

Although this would naturally include the provision of weapons in some cases, there are other opportunities as well. Armed groups in the country are already struggling to deal with demands from civilians in areas ravaged by war, and Syrians will need extensive humanitarian and economic assistance as the longer battle begins to build a viable and democratic post-Assad Syria at peace with the region and the world.