Why has the deadly Idlib crisis been met with a ‘collective shrug’?

A more than three-month bombing campaign by the Syrian regime and Russia has killed an estimated 450 civilians in Idlib, the Syrian opposition’s last stronghold in the northwest of the country, where, analysts and advocates say, their forces will continue to attack with impunity unless the international community does more to stop them. At the same time, the sense that the grinding eight-year war seems to be coming to an end, with regional actors, global powers and militant groups all having a different stake in the final outcome, makes a negotiated settlement less and less likely.

Last week multiple airstrikes hit a busy market in southern Idlib province, killing at least 33 people. It was the largest single death toll in the country since April, when the Syrian government and Russia launched an offensive to retake control of the province.

“It’s civilians who are the pawns of this brutal international struggle to shape how the conflict in Syria comes to a close.”

Rights organizations and analysts say the Assad regime and Russia are deliberately targeting civilian structures, and aid groups are struggling to assist the 3 million people trapped in the province. But the Idlib crisis has been met with a “collective shrug,” the United Nations highest-ranking human rights official said Friday.

Commissioner Michelle Bachelet also voiced concern that the human toll in Syria “is no longer on the international radar.”

“Idlib has become ground zero for a proxy war between the regime and some of its sponsors, those supporting the opposition, and regional actors,” said Steven Heydemann, director of the Middle East Studies Program at Smith College and the former director of the Syria program at the U.S. Institute for Peace.

“It’s civilians who are the pawns of this brutal international struggle to shape how the conflict in Syria comes to a close,” he added.

Why Idlib is under siege

More than 3 million people live in Idlib, many of whom already fled violence in other parts of the country. Throughout the course of the war, the province filled with opposition fighters who were bused there after the Syrian regime steadily took over the rest of the country. The opposition includes several rival factions, but the most dominant is Hay’at Tahrir al-Sham, or HTS.

Last September as part of the Astana peace talks, Turkey and Russia agreed to create a buffer zone in Idlib to separate government and opposition fighters, right after the U.N. warned a full-scale battle would result in a “humanitarian nightmare” for civilians in the province.

In exchange for a cease-fire, Turkey agreed to facilitate the withdrawal of al-Qaida-linked groups from Idlib, along with the removal of all heavy weaponry. Russian Defense Minister Sergei Shoigu said after the agreement that there would be no new military operations against Idlib by the regime and its allies. For a short while, it appeared, civilians in Idlib had been spared from the onslaught.

But eight months later, bombing in Idlib intensified, in what analysts say are a result of tit-for-tat violations of the agreement on both sides, and the regime failing to gain ground in the province.

On one hand, Russia and the regime cite Turkey’s failure to achieve the goals set by the Astana talks, noting rocket attacks against the regime that occured between September and April. Idlib province has special importance to Turkey, which shares a border with the area and has an interest in preventing an increase of Syrian refugees into the country. 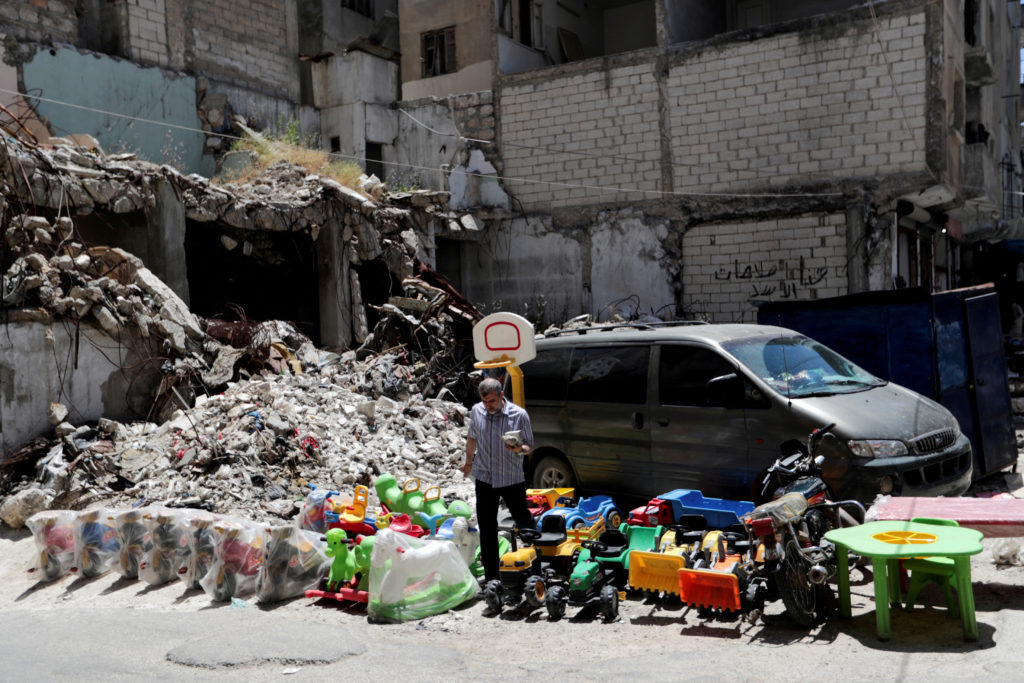 A street vendor sells toys next to rubble of damaged buildings in the city of Idlib, Syria May 25, 2019. Photo by REUTERS/Khalil Ashawi

But supporters of the opposition say the regime and Russia have been violating cease-fire agreements from the beginning. “The Assad regime can’t advance on the ground, and the intensity of the air attacks is intended to make civilians pay a price for the opposition not letting Assad win,” Heydemann said.

The reason Assad can’t win on the ground is because pro-Iranian militias have not participated in the Idlib offensive, arguing it serves them very little strategically, according to Charles Lister, a senior fellow at the Middle East Institute.

Iran-supported militia groups have been involved in Syria’s civil war since the beginning, and at its height boasted 80,000 militiamen. When the Syrian regime launched a ground offensive in the opposition stronghold of Aleppo in late 2016, Iranian forces proved critical to the regime recapturing the city.

The decision to sit out the Idlib fight makes the likelihood of a Syrian regime victory through ground combat nearly impossible.

Lister says the Iranians may be trying to prove a message to the Assad regime and Russia.
“By not playing a role on the ground, Iranians have played their biggest strategic victory,” he said.

“The result is clear, the regime has failed on its own, so Iran has proved more than ever how invaluable its role is to Assad’s continued goal. And more importantly than proving that to Assad, is proving that to Russia,” he said.

Nearly 330,000 people in Idlib have been forced to flee their homes since the beginning of May, and Syrians on the ground say the Syrian regime and the Russians continue to target them everyday.

Dr. Razouk is a pediatrician in Idlib who knows all too well the impact of Russian and regime airstrikes. A Russian airstrike demolished his hospital, the Tarmala Maternity and Children’s Hospital, in southern Idlib on May 15. Health facilities have been attacked 39 times since April, and 14 of the health facilities attacked had previously shared their location with the United Nations to avoid bombardment.

“We gave the United Nations the name and location of the hospital so that the regime would not bomb it,” Razouk told the PBS NewsHour. “But the Syrian regime and the Russians know the places they are bombing are hospital and civilians structures, and they still bomb them anyway,” he said. Razouk recently moved to another hospital closer to the Turkey-Syria border. 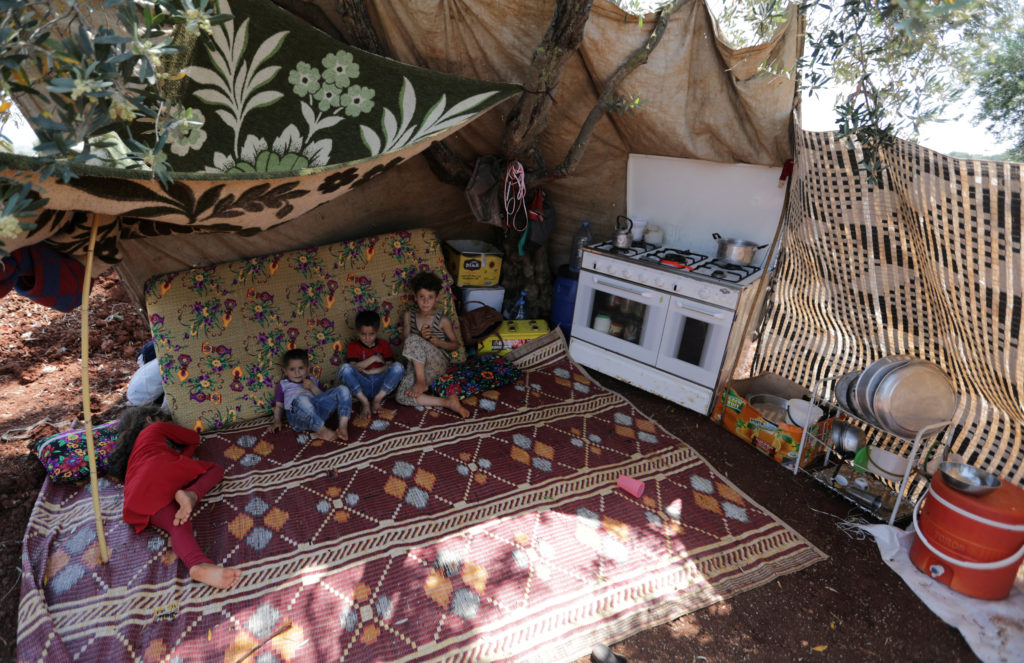 Children sit together on a mat laid out on the floor in a makeshift kitchen in an olive grove at Atmeh town, Idlib province, Syria, on May 15, 2019. Photo by REUTERS/Khalil Ashawi

More than 1 million children live in Idlib, but 250,000 of them are out of school, and 94 schools in the province are being used as shelters. Camps for internally displaced Syrians are overcrowded, and many are forced to live in tents under olive trees.

“These are subhuman living conditions,” said Marwa Awad, a former spokesperson for the World Food Programme in Syria. The WFP has been able to access Idlib from Turkey. “We are calling it a nightmare scenario,” she added.

“They want to send a message to the entire country: We will bomb every hospital, school and civilian structure until you surrender.”

Last Tuesday, the U.S. State Department called for an immediate cease-fire, adding that attacks that “deliberately strike civilian infrastructure” are an “act of desperation” threatening the diplomatic process. On the same day, Secretary of State Mike Pompeo tweeted that the U.S. calls for an “immediate cease-fire and a return to the political process.”

But experts say what’s happening in Idlib is not new, and is part of a larger regime strategy to close in on opposition territory. “You see it along all of the major fronts in Syria: first chipping away at border areas, gradually expanding these attacks… targeting civilian infrastructure, it’s something we’ve seen over and over again,” Heydemann said.

“They want to send a message to the entire country: We will bomb every hospital, school and civilian structure until you surrender, and this has been the message since the beginning,” said Rafif Jouejati, head of the Free Syria Foundation.

How did Syria get to this point?

A civilian uprising against the Assad regime began in March 2011 after young Syrians sprayed anti-regime graffiti on walls in southern Daraa. Peaceful protests spread from Daraa across the country as Syrians called for the downfall of the regime.

By 2012 armed opposition groups responded to Syrian government fire, and the country fell into a civil war. The rise of the Islamic State group in 2014 prompted the U.S. to directly intervene, sending thousands of troops to the country.

The U.S’s stated goals in Syria under the Trump administration have been three-fold: to defeat the Islamic State, to remove Iranian militia groups, and for behavioral change of the Assad regime.

The U.S State Department over the past year has issued warnings that if chemical weapons were used in Syria, there would be consequences. In 2017 and 2018 the U.S. ordered airstrikes after chemical weapon attacks were suspected. 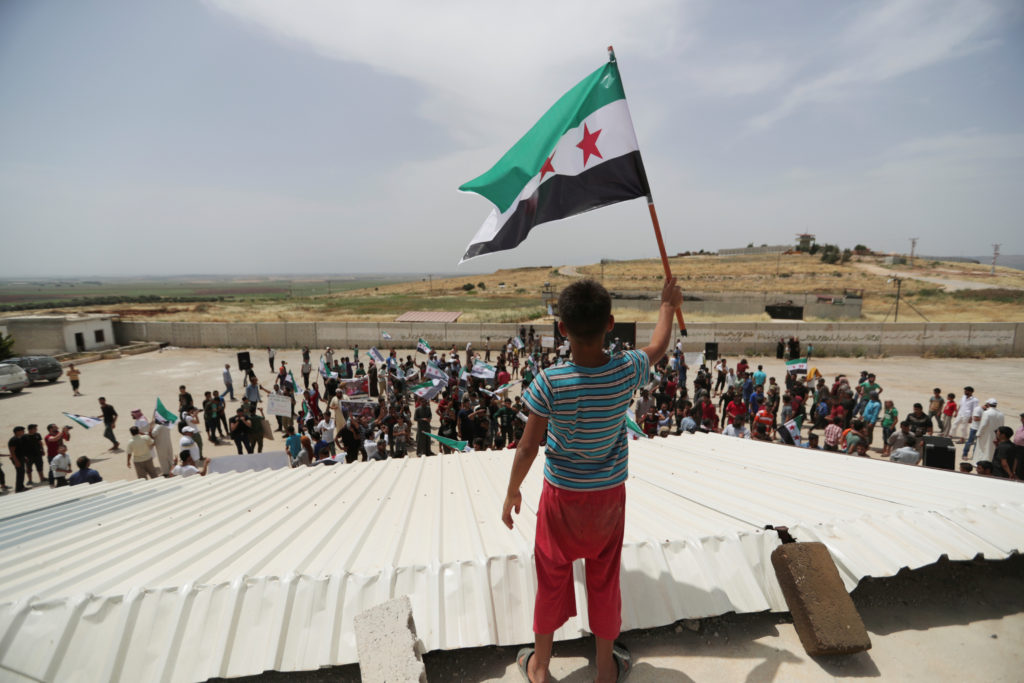 A boy holds the Free Syrian army flag during a protest calling for an end to airstrikes and for Ankara to open the frontier at the Atmeh crossing on the Syrian-Turkish border, in Idlib governorate, Syria, on May 31, 2019. Photo by REUTERS/Khalil Ashawi

But analysts say the Trump administration lacks any real leverage in Idlib without access to the air, and lacks leverage in Syria overall, especially after the December 2018 troop withdrawal.

“The U.S. has systematically undermined any possibility it might have had for acquiring leverage of shaping the events in Syria,” Heydemann said.

Still, the collapse of Idlib to the regime would represent a major loss for the U.S., Lister said. “Idlib is really the last opposition territory, and if that ceases to exist, the opposition has very little leverage and thus our demands as the U.S. have very little realism,” he added.

Multiple rounds of peace talks have all sought to find a political solution to the conflict in Syria, but none have resulted in meaningful change on the ground. At a June 2012 conference, the U.S. and Russia agreed with the need for a transitional government, but the U.S. insisted Assad could not remain in power, and Russia immediately opposed that stance.

“The Assad regime must understand that he does not have a blank check to do this.”

“At the end of the day it’s a waste of everyone’s time, it’s a waste of money and an insult to the Syrian civilians under fire,” Jouejati said, who herself was involved in early talks during the U.N.-monitored Geneva process.

Syrians on the ground say the solution is for Assad to step down and for free and fair elections to take place. “The only solution is to remove Assad and establish a democratic government that is based on respected human rights and treating everyone equally,” Dr. Razzouk said.
But in the meantime, analysts say more civilian deaths are imminent. Earlier this week, an airstrike in Idlib killed 11 more civilians, many of whom were children.

Mouz Moustafa of the Syrian Emergency Task Force said as long as Assad thinks no one will intervene, the bombardment will continue.

“This cannot continue happening unabated…and the Assad regime must understand that he does not have a blank check to do this,” he said.

“It’s happening in front of us, we’re watching it unfold on social media,” Jouejati said. “We are seeing the slaughter of innocent people and doing nothing. What does that make us, as humans and as Americans?”

Left: A White Helmets member uses a saw on rubble after an airstrike identified as Idlib, Syria, on July 16, 2019. Social media video screengrab by White Helmets via REUTERS