Michael Ferron is usually swept up into the general excitement around the Olympic Games.

But this year, the ongoing coronavirus pandemic sapped the Indianapolis resident’s enthusiasm for the Tokyo Games, as did the high-profile scrutiny that Black athletes endured in the lead-up to the global event. Seeing people in Japan protesting the event over COVID, Ferron wasn’t sure if the Olympic pageanty at this time was appropriate.

Weeks before the Games opened, sprinter Sha’Carri Richardson missed out on being an Olympian after she tested positive for THC, a chemical found in marijuana, at the U.S. trials. The failed drug test prevented her from competing in the 100-meter race in Tokyo. The International Swimming Federation, swimming’s governing body, also banned a swim cap specifically made for Black hair, a decision that prompted swift backlash. Alice Dearing, who is poised to make history in Tokyo as Great Britain’s first Black, female, Olympic swimmer, had partnered with the Soul Cap brand before it was prohibited. Dearing told Sky Sports that she didn’t “want little Black girls and little Black boys to look at elite swimming and think it is not open to them.”

Yet Ferron, a son of parents from Jamaica and Cuba, said he wanted to make it a point to show his 3-year-old daughter Maxine examples of Black excellence at the Games, not just in the national spotlight but on the global stage.

The Olympics are always framed as a chance to root for your home team, as medal counts keep track of which countries are leading in hardware, or news coverage drives the competition narrative between major world powers. But for many people of color, the Games are also a way to show solidarity — not around nations — but around race and ethnicity. To root for the diaspora is to acknowledge all the ways people of color have been affected by white supremacy — and to celebrate and cheer on the athletes who are able to break through those barriers. 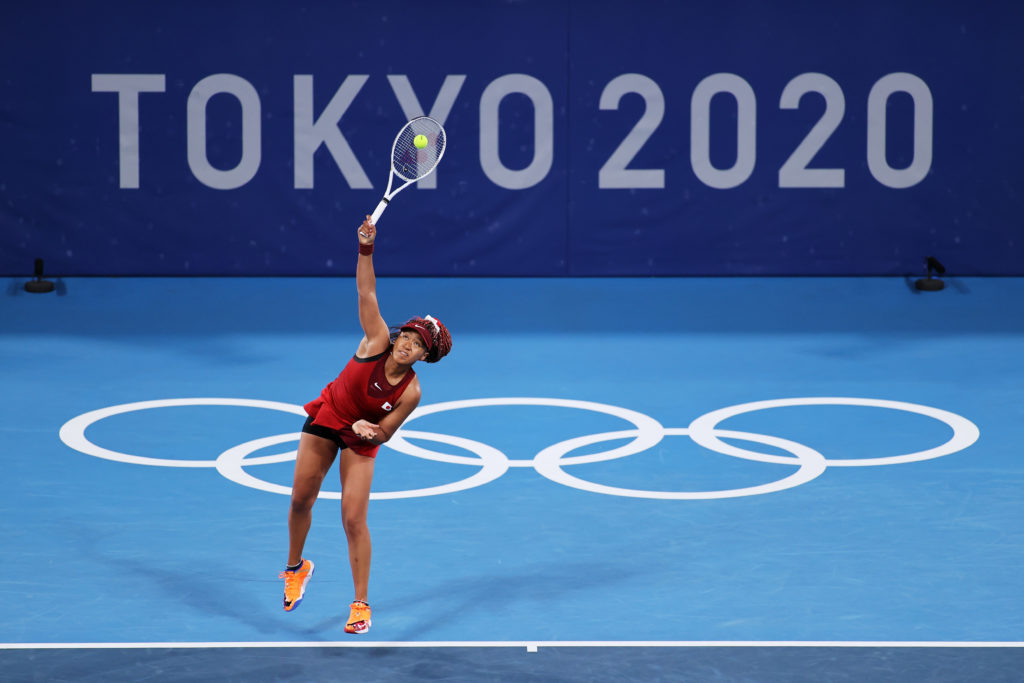 Naomi Osaka of Team Japan serves during her women’s singles match against Marketa Vondrousova of Team Czech Republic on Day 4 of the 2020 Olympic Games. Photo by Clive Brunskill/Getty Images

Ferron said U.S. team member Simone Biles, who some observers say has been undervalued by gymnastics judges, had an upbringing similar to his daughter’s: Both were adopted. And he has appreciated tennis star Naomi Osaka’s openness around preserving her own mental health, a topic Ferron said isn’t discussed enough in Black communities. (Osaka, who represented Japan in this year’s games, lost her match to the Czech Republic’s Marketa Vondrousova. “There was a lot of pressure” going into her Olympic performance, Osaka said.)

“Seeing so many people from all over the world, from the African continent to the Caribbean, North America, South America — and just everywhere that Black people are present — and seeing them all in one place, I think there’s that sense of solidarity,” he told the PBS NewsHour.

To Ferron, Black athletes winning medals and breaking records — no matter where they live or were born — “cements” the accomplishments of people from the African diaspora in history books. 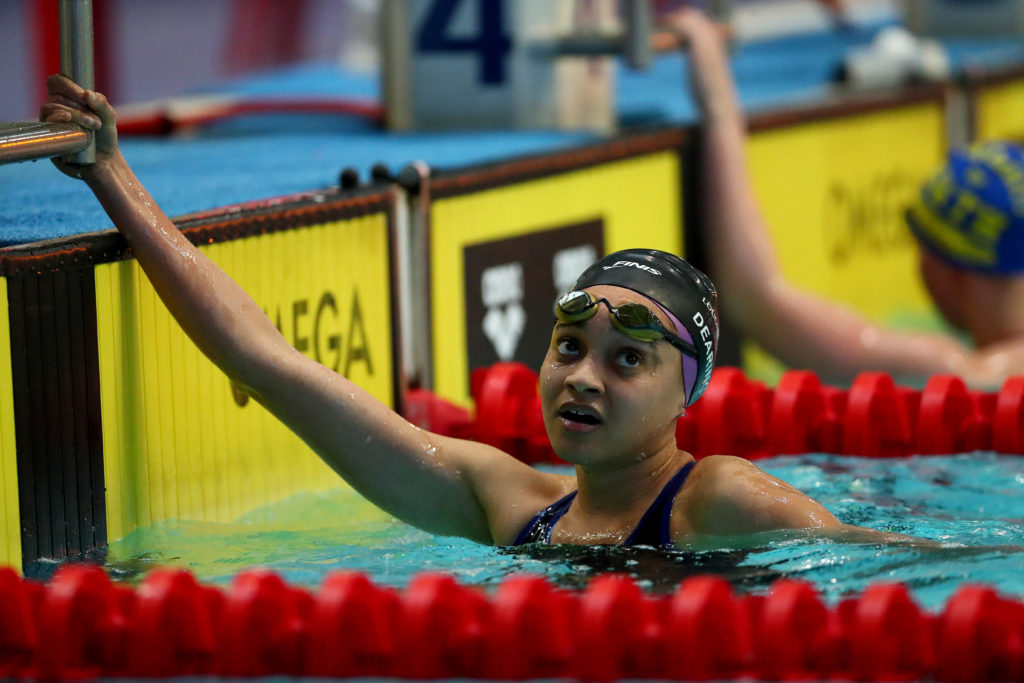 Alice Dearing of Great Britain looks on after her women’s 800m freestyle heat on Day 3 of the Manchester International Swimming Meet in February 2021. Photo by Clive Rose/Getty Images

Ketra Armstrong, a sports management professor and director of the School of Kinesiology’s Center for Race & Ethnicity in Sport at University of Michigan, says that by and large, Black audiences watching the Olympics are “rooting for a commonality of struggle,” particularly for people of African descent. “Oftentimes, seeing people with a shared struggle, a shared kinship, those are the people that we connect with because we’re rooting for them. Because rooting for them is also rooting for us, for our history,” she said.

And that kinship around racial identity is often more salient than the belonging to any one nation, she added.

In sports, when we root for certain teams, there’s a social, psychological and financial investment, Armstrong said, and if we’re going to make that attachment, it must have meaning.

“For many people of African descent, people of color, that meaningfulness lies in the elements of our race, our ethnicity, our culture that distinguishes us, but also celebrates us,” she added.

Armstrong, whose work has covered the social psychology of leisure, said that when Black consumers choose to engage in sports, some are culturally specific. This means watching sports or attending sporting events where there are going to be people like them. They choose to go to places where their heritage will be celebrated and affirmed.

“When you go to a workplace, you don’t have a choice. You may not like the people there. It may be a racially toxic environment to be there. When it comes to leisure, you have a choice,” she said, adding that her research has suggested that Black consumers often make racially affirming choices.

“They just want to see Blackness win,” she said. 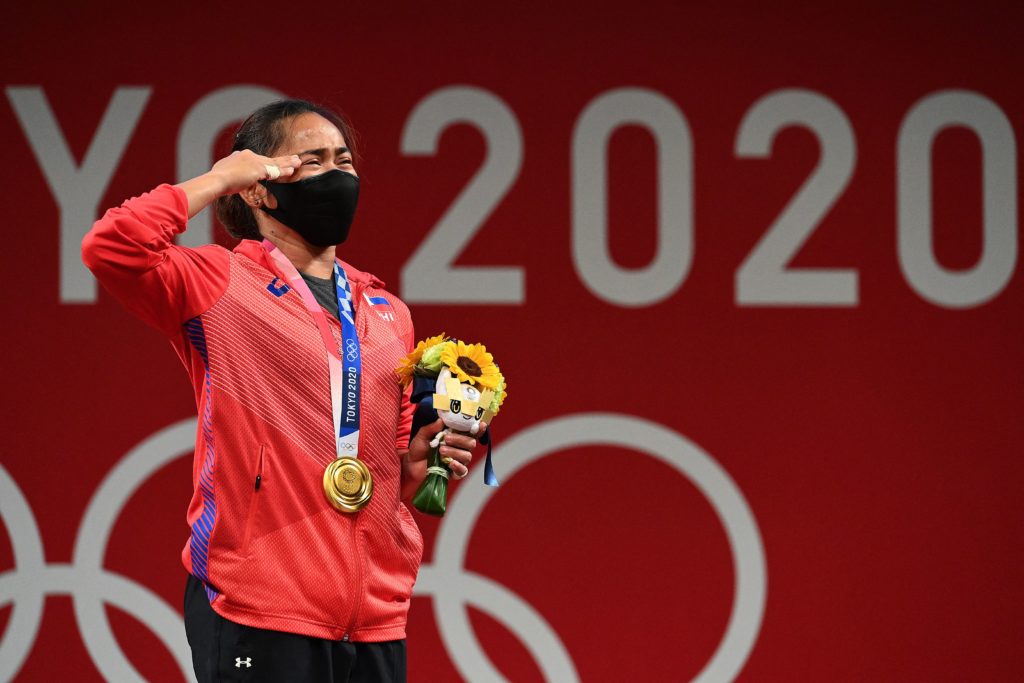 Gold medallist Hidilyn Diaz of the Philippines stands on the podium, after winning the women’s 55kg weightlifting competition during the Tokyo 2020 Olympic Games. Photo by Vincenzo Pinto/AFP via Getty Images

Spectators will look past national origins and root for particular athletes because of their race or ethnicity or their sexual orientation or whatever identity that they can relate to because it allows them to see themselves through these athletes, said Christina Chin, associate professor of sociology at Cal State Fullerton. This is especially true for certain sports where there’s an underrepresentation of people of color.

Chin pointed to Osaka, who has fans in both Black and Asian communities around the world.

“When you see somebody who looks like you, who represents you — at least by race or by ethnic identity — you can’t help but be swept up and support [these athletes] because it really is breaking those stereotypes, breaking the concept of who can excel, who can dominate these particular sports,” Chin said.

Chin, who has studied Asian Americans in sports, said athletes like Jeremy Lin, a Taiwanese American basketball star, have helped dismantle stereotypes by “challenging people’s conceptions about what Asian bodies can or cannot do.” The Olympics are an opportunity to do this on a global scale, she added.

Less than a week into the Tokyo Games, a moment nearly a century in the making occurred when Hidilyn Diaz secured the Philippines’ first-ever gold medal, after winning the women’s 55-kilogram weightlifting category and breaking two Olympic records in the process.

Diaz, a sergeant in the Philippine Air Force, stood atop the winner’s podium. She saluted her country’s flag and sang along as she broke into tears. For Filipinos and many outside the country, the history-making moment was a “lift of faith.” 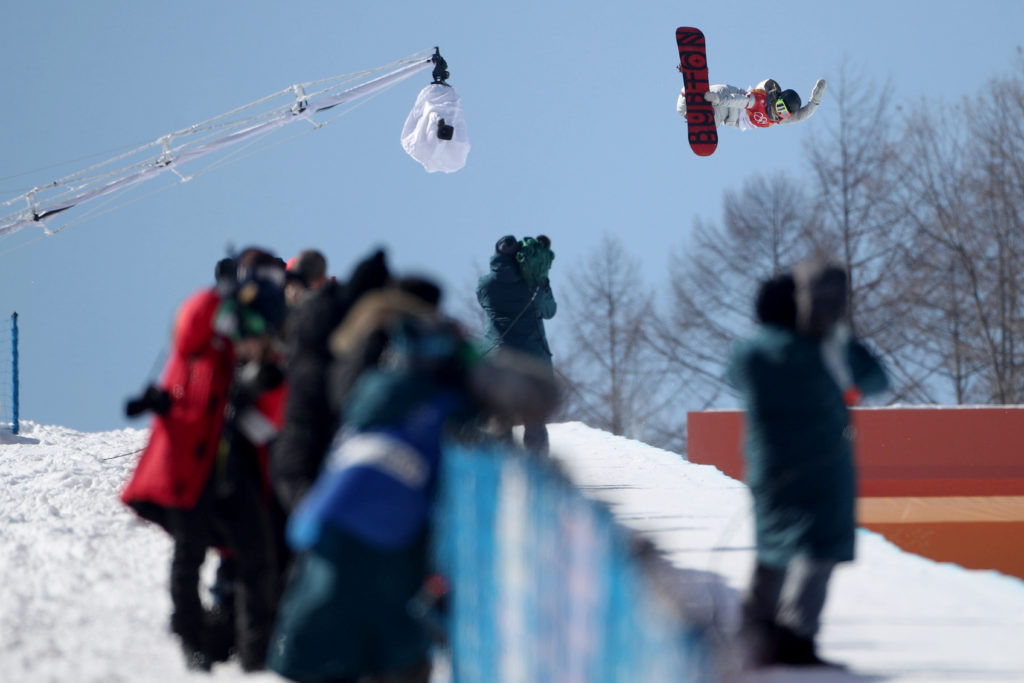 Snowboarder Chloe Kim of Team USA competing on the final day of the women’s halfpipe competition at the 2018 Pyeongchang Olympics in South Korea. Photo by Tim Clayton/Corbis via Getty Images

Two years ago, snowboarder Chloe Kim made history at age 17 in Pyeongchang, South Korea, when she became the first woman to land back-to-back 1080-degree spins at the Olympic Games. Kim had begun dominating U.S. and global snowboarding competitions when she was even younger.

Chin said Kim changed the narrative of snowboarding in particular. With her magnitude of power and skill and dedication, “she was really rewriting how people think about Asian female bodies,” Chin said.

A first-generation Korean American and daughter of immigrants, the athlete competed a few hours away from where her parents had grown up. While in the spotlight, reporters repeatedly asked Kim about her Korean American identity. Kim demonstrated how she didn’t need to adhere to a single affiliation.

Speaking with ESPN at the time, Kim said she has “this different opportunity because I’m Korean American, but I’m riding for the States.”

Kim said she was unsure how she’d be accepted by the public. “But now I’m starting to understand that I can represent both countries.” 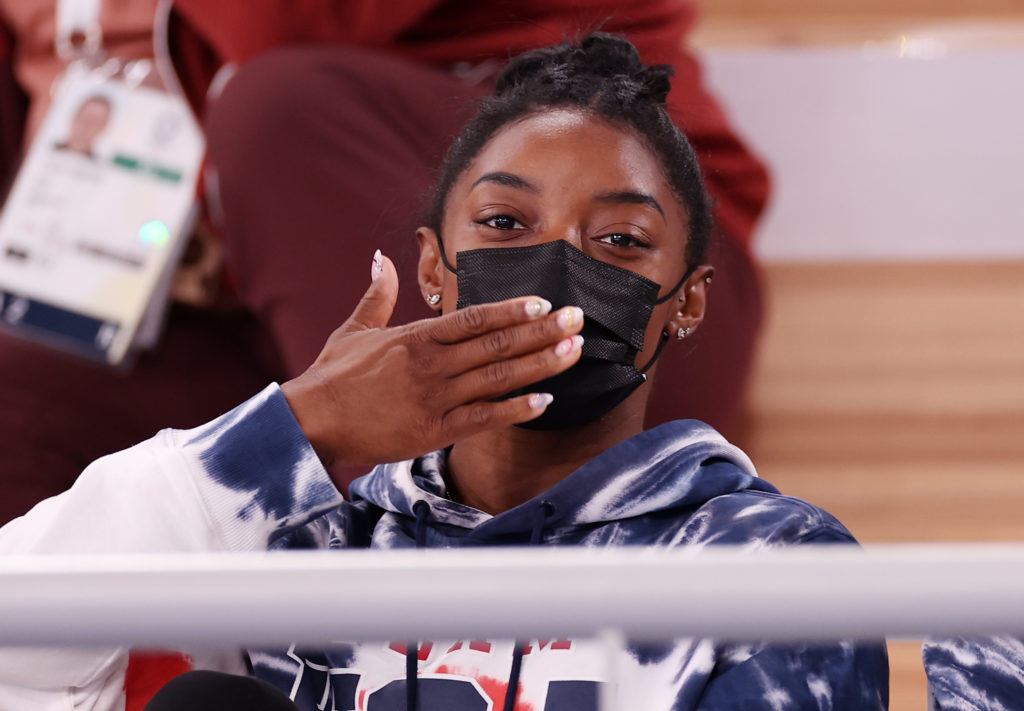 After Biles took a step back from the women’s gymnastics team final on Tuesday, she spoke about the outsized expectations placed squarely on her shoulders. The next day, USA Gymnastics announced that she had also withdrawn from the individual all-around competition.

“At the end of the day we’re human, too,” Biles said in a news conference after the team competition. “We have to protect our mind and our body, rather than just go out there and do what the world wants us to do.”

When Ferron heard the news, he said he could “only imagine what a top athlete — the top of the top athletes in your field — must go through.”

He said now he’s no longer just rooting for Black excellence at the Games. He still wants athletes to do well, but winning is about being safe, healthy and happy, too.

The ‘insurmountable’ weight of expectations on Simone Biles, other professional athletes