President Donald Trump will host Hungarian Prime Minister Viktor Orbán at the White House on Monday, breaking with past U.S. presidents who refused to meet the leader over his human rights record, anti-democratic efforts to consolidate power, populist messaging and ties to other authoritarian regimes.

A White House statement said the two leaders would “discuss ways to deepen cooperation on a range of issues, including trade, energy, and cyber security.” Trump and Orbán also plan to “explore opportunities to meet the many national security responsibilities of their two countries,” the White House said. The two leaders will also mark Hungary’s 20th anniversary as a NATO member.

But the meeting has drawn criticism from foreign policy watchers who say the optics are just as important as what gets discussed.

As prime minister, Orbán has streamlined the Hungary’s political system to create one-party rule, dismantled the judicial system, and overhauled the education system and media landscape in the country to solidify his power. He has also built a 109-mile fence along Hungary’s southern border, and drastically reduced the number of asylum seekers who are allowed into the country — policies similar to the hardline immigration tactics Trump has pursued in the U.S.

Who is Viktor Orbán?

Trump has a history of engaging authoritarian leaders across the world, including North Korea’s Kim Jong Un, Russian President Vladimir Putin and Turkish President Recep Tayyip Erdogan. Last month, Trump held a meeting at the White House with Egyptian President Abdel Fattah al-Sisi, who has been widely criticized for presiding over a human rights crisis in Egypt.

But Orbán’s authoritarian tactics stand out, political analysts said, because he has succeeded in amassing power while leading a country that belongs to the European Union.

“He has unfortunately been very, very good at using the institutions and instruments of democracy to turn the country towards authoritarianism,” said Andras Simonyi, a former Hungarian ambassador to the U.S. and NATO.

He wasn’t always a hard-line, right-wing authoritarian leader. Orbán began his political career as the leader of a small youth group called Fidesz. In 1989, he advocated for the withdrawal of Soviet troops from Hungary and for free elections in the country.

“I used to know the Orbán who was [a] smart, young, liberal politician, who I really thought highly of. So my take on him now is: What happened?” said Simonyi, who first met Orban in 1988.

Simonyi claimed Orbán was motivated by “power and money,” as well as a fear of losing power again.

As Orbán has consolidated power in recent years, the “rule of law in Hungary has been completely jettisoned,” said Melissa Hooper, the director of the Human Rights and Civil Society program at the advocacy group Human Rights First.

In Hungary’s last election in 2018, Orbán received less than 50 percent of the popular vote, but still won a two-thirds majority. Critics argued Orbán was able to win in part because of his decision to redraw the electoral map, a process he started in 2010.

As prime minister, Orbán has created a parallel court system where he selects the judges who have jurisdiction to hear cases ranging from local government issues and elections to media issues.

Orbán’s political party has also gained control over roughly 90 percent of Hungary’s media outlets. In 2016, for example, the weekly left-leaning newspaper Népszabadság was suddenly shut down by its parent company. Its employees were locked out of the building and told that because they were still on contract they could not find new journalism jobs. The journalists and their supporters suspect Orbán played a role.

“It’s a propaganda machine on steroids. They have hundreds of outlets throughout the country where they spread disinformation,” Hooper said. 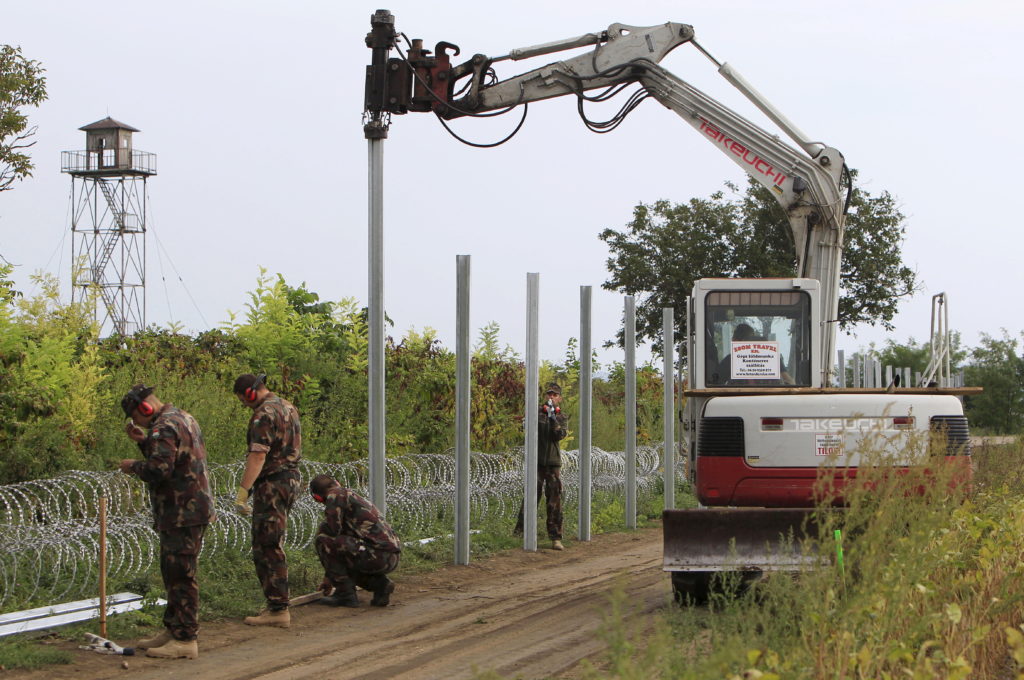 Hungarian army soldiers erect a fence on the border with Croatia near Sarok, Hungary, September 20, 2015. Built in a matter of weeks by soldiers, prison labourers and cadres of the unemployed, a vast new wall along Balkan frontiers was a monument to the ruthless efficiency with which Prime Minister Viktor Orban has mobilized Hungary against migrants. Photo by Bernadett Szabo/Reuters

Orbán’s Hungary also has laws that criminalize work done by non-governmental organizations, like providing information to refugee and asylum seekers in the country.

Orbán’s last campaign for prime minister linked migrants to rape and terrorism, and warned that the “Christian culture” of the country was at risk from a “migrant invasion” of Muslims. His party’s current EU election campaign includes a slogan of “Let’s stop immigration!” and is supporting anti-immigration leaders to head EU institutions like the European Parliament and the EU Court of Justice.

The EU’s right-leaning coalition recently took voting rights away from Orbán’s party because of his anti-immigrant and anti-Semitic campaigns.

“By getting away with what he did, he showed aspiring autocrats what’s possible,” said R. Daniel Kelemen, a professor of political science and law at Rutgers University.

Indeed, populist parties and authoritarian policies have taken hold in nearby Poland and Romania, and more liberal political coalitions in other European nations like Germany have struggled to defeat far-right anti-immigrant groups in recent elections. Ahead of this month’s European Parliament elections, far-right leaders are trying to organize a pan-right bloc, and advocating to move more decision-making power back to national governments.

And though Orbán and the EU have sometimes found themselves at odds, Hungary’s prime minister has established and maintained a strong relationship with Russian President Vladimir Putin. Orbán and Putin have met every year since 2009.

Since their first meeting a decade ago, Orbán “has never been openly critical of Putin and only a few times critical of Russia,” said András Racz, a non-resident fellow at the Center for Defense and Security.

Ramifications of the Trump-Orbán meeting

Orbán’s meeting Monday with Trump will be the first White House visit by a Hungarian prime minister since 2005.

When Orbán came to the United States in 2001 during his first premiership, President George W. Bush declined to meet with him. While he was in office President Barack Obama avoided a meeting with Orbán as well. In in 2014 the Obama administration denied visas to six Hungarian officials suspected of corruption.

Trump’s decision to invite Orbán to the White House comes after Secretary of State Mike Pompeo met with Orbán in Hungary in February, as part of a tour of the region to counter Russian and Chinese influence.

Trump and Orbán have had a seemingly cordial relationship from the start. Orbán was the only leader in the European Union to endorse Trump in the 2016 election.

Orbán was the only leader in the European Union to endorse Trump in the 2016 election.

“[Orbán] wants to show that he’s in the big leagues, that he’s hosted by one of the most powerful leaders in the world, and he wants to convey this image that he’s part of this right-wing international,” Kelemen said.

Critics of the Trump administration have argued that the president’s own anti-immigration policies and willingness to overlook human rights abuses from other foreign leaders is degrading the United States’ reputation as an advocate for democracy. A 2018 Pew Research Center survey found global opinion of the U.S has dropped to historic lows since Trump took office.

“Courting an authoritarian actively working to dismantle democracy in the EU may break what little credibility the U.S. has,” Hooper said.

Rising tensions between the U.S. and Iran