Thirty years after devastating sanctions were first imposed on Iraq, President Donald Trump’s threat of new sanctions is a chilling reminder for average Iraqis of the pain, demoralization and hard choices they experienced amid policies of global economic pressure.

In the fallout over the targeted killing of Iranian Revolutionary Guard Gen. Qassem Soleimani, Trump said this week that he would impose sanctions on Iraq “like they’ve never seen before” if U.S. forces were told to leave the country.

After Iran’s top general was killed at a Baghdad airport on Saturday — an act many Iraqis viewed as a violation of its sovereignty — Iraq’s parliament passed a non-binding resolution Sunday that said foreign troops must be expelled.

Trump reiterated on Wednesday that he would consider putting sanctions on Iraq but only “if we’re not treated with respect.”

Trump also threatened multiple times this week to force Iraq to pay the U.S. back the “billions of dollars” it has spent building air bases that the U.S. uses for military operations following the U.S. invasion of the country.

“The 1990 sanctions were the worst era in Iraqi history…its lasting effects demoralized an entire generation.”

Foreign policy analysts say imposing sanctions would likely be counterproductive for the U.S., which has spent the last 17 years trying to help rebuild Iraq’s economy after it started a war there in 2003.

Rather than penalizing Iraq, giving that country economic support has been part of the U.S. playbook, said Richard Nephew, a former State Department advisor on sanctions issues. “A free, stable and sovereign Iraq with all the economic trimmings would be in the U.S. foreign policy and national security interests.”

For many Iraqis who survived the sanctions regime of the 1990s as well as the 2003 invasion, the threat of sanctions now is enough cause for concern.

“The 1990 sanctions were the worst era in Iraqi history,” said Abbas Kadhim, the senior fellow on Iraq at the Atlantic Council. “It not only put Iraqis in over a decade of economic hardship and misery and a lot of depletion of their infrastructure,” but “its lasting effects demoralized an entire generation.”

In 1990, sanctions that were imposed by the U.N. Security Council — but driven primarily by the U.S. and the U.K. — essentially cut off trade and any financial support to Iraq, isolating the country. They largely stayed in place until the U.S. invasion of the country in 2003, which toppled then-leader Saddam Hussein.

Many Iraqis still remember how, combined with widespread conflict in the region, those sanctions crippled the nation’s economy.

According to one study, increased rates of malnutrition during that time caused an estimated 227,000 “excess deaths among young children” in Iraq from 1991 to 1998. However, the exact number of malnutrition-linked deaths is unknown and the numbers reflected in some studies have been criticized as inflated. Regardless the social, political and economic stability of the Iraqi people showed a documented decline due to the the effect of sanctions. 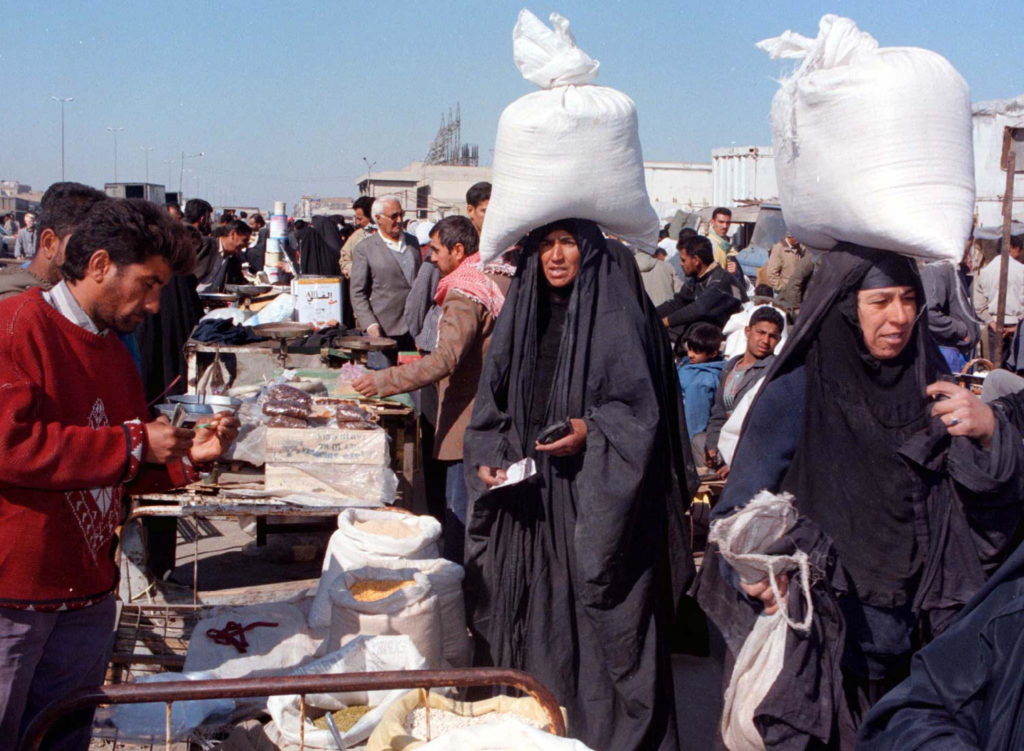 Iraqis shop at an outdoor market in Baghdad for essential foods February 2, 1997. At the time, Iraq’s Central Bank governor Isam Hweish said that despite U.N. sanctions, imposed on Baghdad for its 1990 invasion of Kuwait, trade across its porous borders with Jordan, Turkey and Iran helped maintain a supply of some necessary goods. Photo via Reuters

Denis Halliday, the U.N. humanitarian coordinator for Iraq during the time of the sanctions, resigned from his post in 1998 over the policy, saying “we are in the process of destroying an entire society. It is as simple and terrifying as that.” Officials in the George H.W. Bush administration at the time, however, defended the sanctions as an effective way to combat the regime of Saddam.

James Rubin, who served as U.S. Assistant Secretary of State for Public Affairs in the Clinton Administration said of sanctions at the time: ”What should we have done, just lift sanctions and hope for the best? I believed then and believe now that that was just too risky, given Saddam Hussein’s past, his repeated attempts to invade his neighbors, his treatment of his own people and the weapons we knew he was developing.”

The sanctions also served to give Iraq’s leaders near total control over the people.

“The scarcity that forced ordinary Iraqis to depend more on the government, was because of the sanctions,” Erik Gustafson, director of Enabling Peace in Iraq Center (EPIC), an Iraq advocacy group that was created following the sanctions of the 90s.

The corruption that was almost synonymous with post-2003 Iraq is part of the lasting legacy of the sanctions regime of the ‘90s, Kadhim said.

“The depletion of the Iraqi society’s fabric was because of the sanctions,” he said, adding that the bribery and scheming that was a common mechanism of survival through the sanctions “changed the psyche of the Iraqi people and trained it to do the unimaginable.”

The basis for that type of survival only became amplified following the 2003 invasion, he said. “The amount of fraud and corruption was astronomical,” and has left a deteriorated society that “allows all of the social ills” that are being seen in the country today, like the politicization along sectarian lines, a weak governing structure and failed infrastructure and social services.

Now, just the insinuation of new penalties has sparked fear of further breakdowns, according to people with ties in the region.

“Iraq is a very vulnerable state. It doesn’t need more problems, and this is causing a lot of problems domestically,” said Walid Khadduri, an expert on Iraq’s energy sector.

Iraqi officials have acknowledged the need to diversify the nation’s economy, but as of now, it is still heavily reliant on oil exports. In addition to making up the vast majority of the government revenue, oil accounts for about 65 percent of Iraq’s gross domestic product.

Analysts predict that sanctions on Iraq’s oil could push global oil prices up to more than $70 per barrel. As of Thursday midday, oil was trading around $60 dollars per barrel.

Even though few Iraqis work in the oil and gas sector, they rely on the money from oil exports to be funneled into the broader economy and support other businesses. 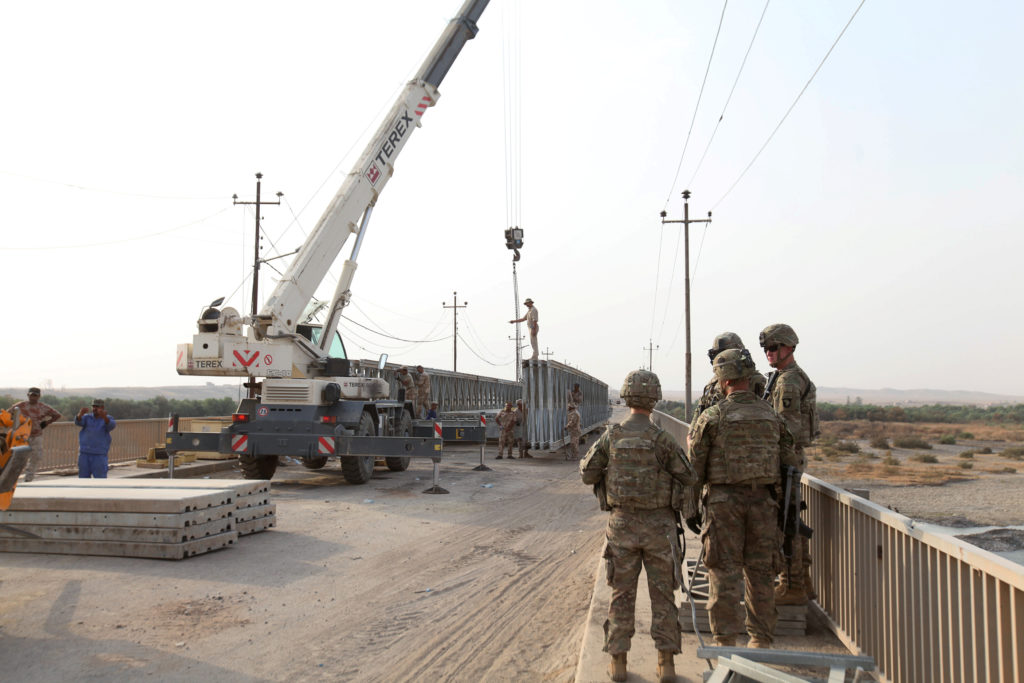 U.S. soldiers walk on a bridge in the town of Gwer, northern Iraq August 31, 2016. U.S. forces have worked to improve Iraq’s infrastructure since the 2003 invasion, but Iraq watchers say the efforts have done little to improve Iraq’s economy. Photo by Azad Lashkari/Reuters

Colin Rowat, an economist at the University of Birmingham in the UK who has studied the effects of the 1990s sanctions in Iraq, said the historical sanctions did little to stop goods from moving across the border between Iraq and its neighbors, including oil, which was smuggled out of the country.

But the sanctions and wars did limit foreign investment, as well as Iraqis’ access to education, which had previously been the best in the region.

Because the legacy of the sanctions regime is still very clear to many, Iraqis are “thinking of contingencies” for economic security in the form of other countries, even if they are not desirable options, Kadhim said, citing potential partnerships with countries like China.

Trade between Iraq and China exceeded $30 billion in 2018, and last year Iraq signed onto China’s long-term global infrastructure project known as the Belt and Road initiative.

Many experts believe sanctions will only ultimately hurt the people of Iraq, while leaving Iraq’s leadership relatively unaffected. “For ordinary Iraqis, it would have a devastating effect. The political figures would be alright, the militias would also be alright,” Gustafson said.

It’s unclear what form the sanctions would take. It’s likely any sanctions against Iraq would be unilateral because U.S. allies have been critical of the Trump administration’s handling of its relationship with Iran and do not appear to have an appetite for becoming further embroiled in the Middle East.

Without international support, the U.S. could issue narrow sanctions against top Iraqi officials. Such a move would likely be seen as a political rebuke, but would not do much to damage Iraq’s economy.

If the U.S. wanted to deal a harsher economic blow, it could target companies, including international banks, doing business with Iraq. Or, sanctions could be put on the nation’s oil exports, which make up 90 percent of Iraq’s government revenue.

Broad sanctions against Iraq could wipe out any economic progress, however small, that has been made over the past several years.

For years, the U.S. has tried to build up Iraq’s telecommunications networks, electricity sector and legal system in hopes of spurring economic growth and attracting foreign investment. Those efforts have spawned little success. Iraq ranks among the worst countries in the world to do business, according to a World Bank index.

Still, broad sanctions against Iraq could wipe out any economic progress, however small, that has been made over the past several years.

Sanctions could also force Iraq to further align with U.S. rivals like Iran.

Tensions between the U.S. and Iran hit a peak in the wake of Soleimani’s death. On Tuesday, Iran responded to his killing by launching several missiles at at least two U.S. military bases in Iraq, though no casualties have been reported.

Iraqis want their nation to be independent from foreign influence, including both American and Iranian, but in a global economy, all nations need economic partners.

“If the U.S. decides to impose sanctions, the Iraqis are going to look around to places they can do business,” Nephew said. “There are only a few places that is likely to come from and Iran is one of them.”

Left: University students attend a protest against the U.S and Iran interventions, in Basra, Iraq January 8, 2020. Photo by Essam al-Sudani/Reuters

What we know about Iranian attacks on U.S. bases in Iraq