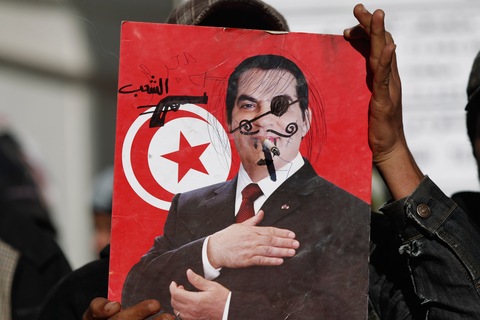 A set of 10 diplomatic cables released by whistleblower website WikiLeaks offers some insight into the recent upheaval in Tunisia and starts to answer the question of why so many Tunisians took to the streets to topple their leader.

The cables, written by the U.S. Embassy in Tunis between January 2006 and June 2009, cover topics ranging from corruption in the country to a dinner for the U.S. ambassador hosted by the son-in-law of Tunisia’s then-President, Zine al-Abidine Ben Ali.

Some of the memos, which first appeared in November, were widely available in Tunisia after the WikiLeaks document dump, according to regional experts. They were translated and disseminated through private websites and social networking sites.

One overarching theme of the cables: corruption. Many refer to Ben Ali’s family as “The Family,” which stood above the law and ruled the country without any control or restraint from the outside. Nepotism extended to the family of Ben Ali’s wife, Leila, whose numerous siblings occupied critical government position or were the owners of media, airlines, assembly plants and distribution rights, according to one cable sent to Washington from Tunis in 2008.

A U.S. Embassy cable from 2008 stated that Ben Ali’s “quasi-mafia” family lived in opulence, indulging in excessive consumption and authoritarian tactics to rule the country.

The same cable revealed that the first lady of Tunisia benefited personally from a 2007 real estate boom. She received a valuable piece of land and $1.5 million in assistance from the government for the construction of the Carthage International School, which she later sold to investors from Belgium for “a huge, but undisclosed sum,” according to the secret cable.

“There were a lot of specific details in the cables that the public had not been exposed to before the release. There is no question that WikiLeaks added substantial evidence to the story that people already knew,” said Shibley Telhami, Anwar Sadat professor for peace and development at the University of Maryland.

In one, an American diplomat describes his visit to a house of the president’s son-in-law, El Materi. “The house was recently renovated and includes an infinity pool and a terrace of perhaps 50 meters, there are ancient artifacts everywhere: Roman columns, frescoes and even a lion’s head from which water pours into the pool. El Materi insisted the pieces are real,” said the cable. El Materi also owned a pet tiger with the name “Pasha,” which stands for a powerful authority.

The tiger was slaughtered during the recent upheaval, and the house was looted.

One U.S. cable from 2008 details the pressure put on businessmen and politicians in Tunisia. A member of the parliament reportedly was repeatedly confronted by his party because he refused to donate to a soccer team linked to the first lady’s family.

The Ben Ali clan also is accused of manipulating Tunisia’s banking sector and orchestrating numerous financial schemes. The 2008 cable reveals that most of non-performing loans, which constitute 19 percent of all loans, “are held by wealthy Tunisian business people who use their close ties to the regime to avoid repayment.” Ordinary people do not trust Tunisian banks and avoid investing in the domestic economy for fear of losing their assets.

The latest diplomatic cables from 2008 show American officials concerned about the status quo in Tunisia, calling it “a troubled country” ruled by the “sclerotic” regime without a clear successor.

“The WikiLeaks revelations confirmed that people surrounding president Ben Ali were corrupt and spent a lot of money. They lived in mansions and had their food delivered to them directly from France. It was happening at a time when ordinary Tunisians were struggling to find jobs and feed their families. It’s a bit of Marie Antoinette-like disconnect between the people and the top,” said North Africa and Mideast expert Mary-Jane Deeb.

This disconnect is what angered the many Tunisians that took to the streets in the final days of Ben Ali’s presidency, she said. For days they demanded jobs and free speech and the removal of Ben Ali, who had been in office for 23 years.

After President Ben Ali fled Tunisia, his counterpart in the neighboring country of Libya, Col. Moammar Qaddafi, came up with his own theory on why Tunisians revolted.

In a Jan. 17 televised address, Qaddafi denounced the mass upheaval in Tunisia as a Western plot. He implicated WikiLeaks as a product of “lying ambassadors in order to create chaos.”

According to journalist Mona Eltahawy, in a column published by the Guardian, “Qaddafi railed against WikiLeaks because he, too, wants to blame something other than the power of the people. … His speech to Tunisians could be summarized thus: I am scared witless by what happened in your country.”

Analysts agree that Tunisians in general were aware of the rampant corruption and plutocracy of Ben Ali’s family, but the U.S. cables from Tunis added definition to the problems.

Activists in Tunisia translated and disseminated the documents in a website that focused particularly on the corruption allegations.

Word of the cables spread rapidly in the Internet-savvy country, said Radwan Masmoudi, president for the Center for the Study of Islam and Democracy. Tunisians “have the highest percent of Facebook users in the world per population, something like 2 million among 10 million people have their own Facebook account.”

According to Telhami, the Al-Jazeera network, which enjoys popularity in the region, also played a significant role in translating the cables and educating the public about their content.

Deeb said that although the content was not particularly surprising, “to have it said in official statements was important because very often there are rumors, people tend to say things, exaggerate things so people in the Middle East are always skeptical about what they hear. But when it comes from the U.S. officials it is different, it strengthens the views people already had.”

Wikileaks showed “the extent to which the leaders, the authority in the Arab world have been disrespected and dismissed by their Western sponsors. It is insulting, there is shame and embarrassment,” Telhami said.

View more international coverage on our World page and follow us on Twitter.
Editor’s Note: Views presented in the article by Marie-Jane Deeb do not represent the position of the Library of Congress.