MADRID — Women across Europe and Asia shouted their demands for equality, respect and empowerment Thursday to mark International Women’s Day, with protesters in Spain launching a 24-hour strike and crowds of demonstrators filling the streets of Manila, Seoul and New Delhi.

Spanish women were staging dozens of protests across the country against the wage gap and gender violence. In Madrid, a massive demonstration was planned for the evening. In Barcelona, protesters who disrupted traffic into the city center were pushed back by riot police.

In some countries, protests were more muted, however.

International Women’s Day is a public holiday in Russia, but opposition presidential candidate Ksenia Sobchak was one of the few demonstrators in Moscow.

In a protest reminiscent of the #MeToo movement, which aims to hold those involved in sexual misconduct, and those who cover it up, accountable, Sobchak staged a solo picket outside the lower house of the Russian parliament to demand the resignation of a prominent lawmaker whom several female journalists accuse of sexual harassment. 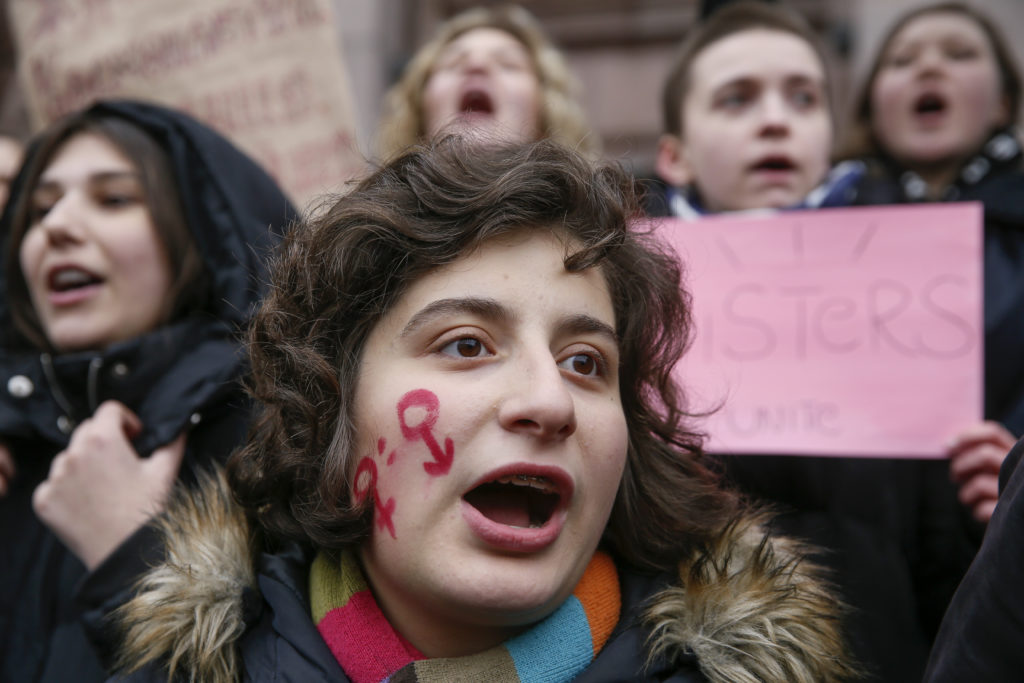 Participants shout slogans during a rally for gender equality and against violence towards women on the International Women’s Day in Kiev, Ukraine. Photo by Valentyn Ogirenko/Reuters

On a lighter note, a leading French newspaper found a witty way of making its point about discrimination and the gender pay gap — by upping its price for men. The left-leaning daily Liberation said that for one day only, men would pay 50 euro cents more than women, in a reflection of the 25 percent less that women in France are paid, on average.

Across Asia, women came out to mark the day. In China, students at Tsinghua University used the day to make light of a proposed constitutional amendment to scrap term limits for the country’s president. One banner joked that a boyfriend’s term should also have no limits, while another said, “A country cannot exist without a constitution, as we cannot exist without you!”

But photos of the students’ banners, like other content about the proposed amendment, were quickly censored on social media. 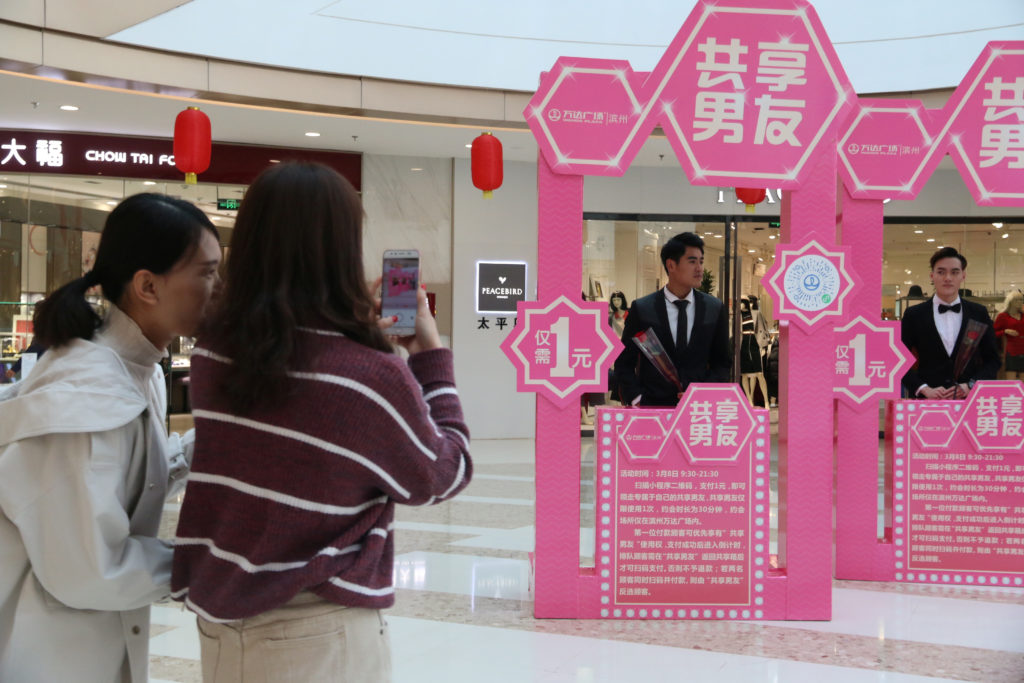 A woman takes pictures of men standing behind booths during an International Women’s Day event inside a shopping mall, where customers can rent a “boyfriend” for 30 minutes with one yuan ($0.16), in Binzhou, Shandong province, China. Photo by Reuters 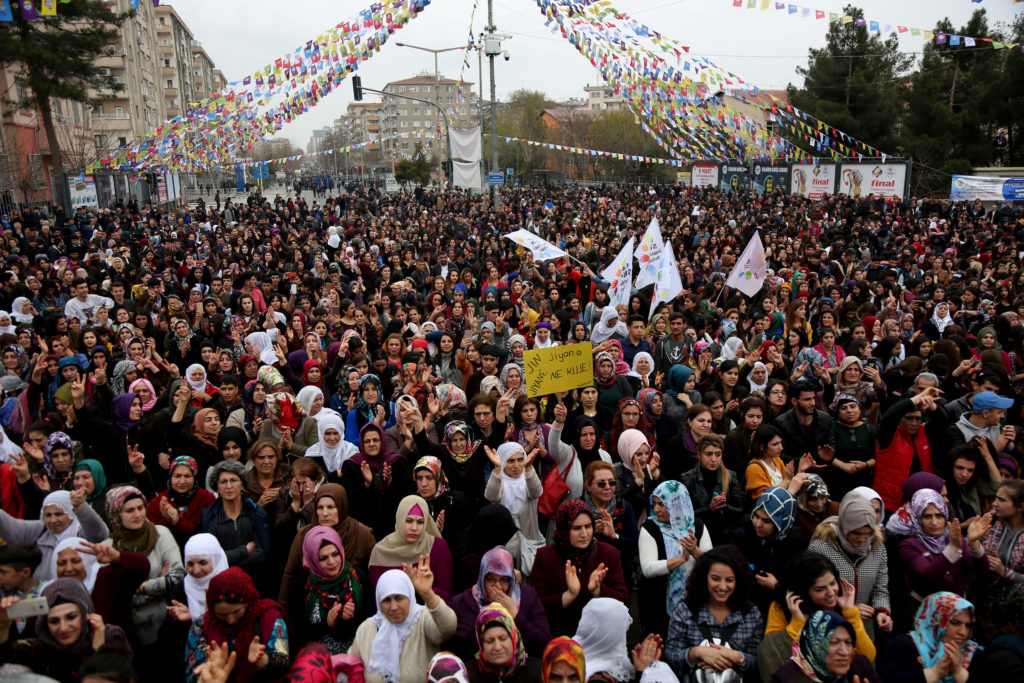 Women gather during a rally on the International Womens Day in Diyarbakir, Turkey. Photo by Sertac Kayar/Reuters

Hundreds of activists in pink and purple shirts protested in downtown Manila against Philippine President Rodrigo Duterte, calling him among the worst violators of women’s rights in Asia. Protest leaders sang and danced in a boisterous rally in Plaza Miranda, handing red and white roses to mothers, sisters and widows of drug suspects slain under Duterte’s crackdown on illegal drugs.

Human rights groups have condemned Duterte’s sexist remarks, including one in which he asked troops to shoot female communist rebels in the genitals. Protest leader Jean Enriquez also railed against Duterte’s anti-women remarks, saying: “We’re so alarmed. We have seen his direct attacks on women under his iron-hand rule and it’s now time to heighten our resistance.”

In Afghanistan, hundreds of women, who would have been afraid to leave their homes during Taliban rule, gathered in the capital to commemorate the day— and to remind their leaders that plenty of work remains to be done to give Afghan woman a voice, ensure their education and protect them from increasing violence.

Hundreds of South Koreans, many wearing black and holding black #MeToo signs, rallied in central Seoul. South Korea’s #MeToo movement has gained significant traction since January, when a female prosecutor began speaking openly about workplace mistreatment and sexual misconduct. The list of women who speak out is growing day by day.

Several high-profile South Korean men have resigned from positions of power, including a governor who was a leading presidential contender before he was accused of repeatedly raping his female secretary. 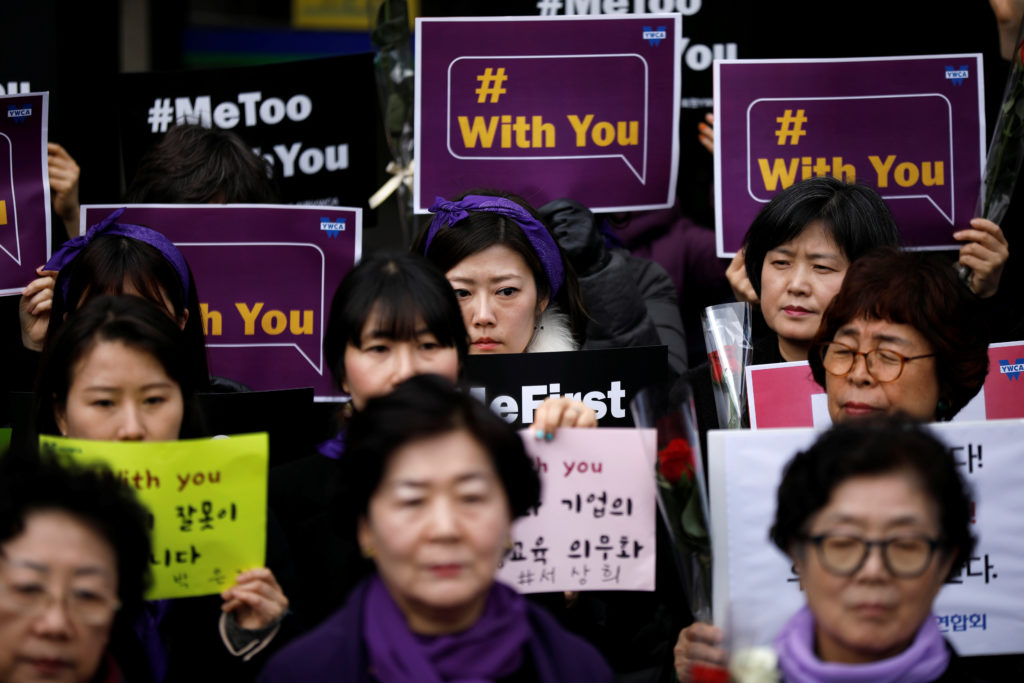 Women attend a protest as a part of the #MeToo movement on International Women’s Day in Seoul, South Korea. Photo by Kim Hong-Ji/Reuters 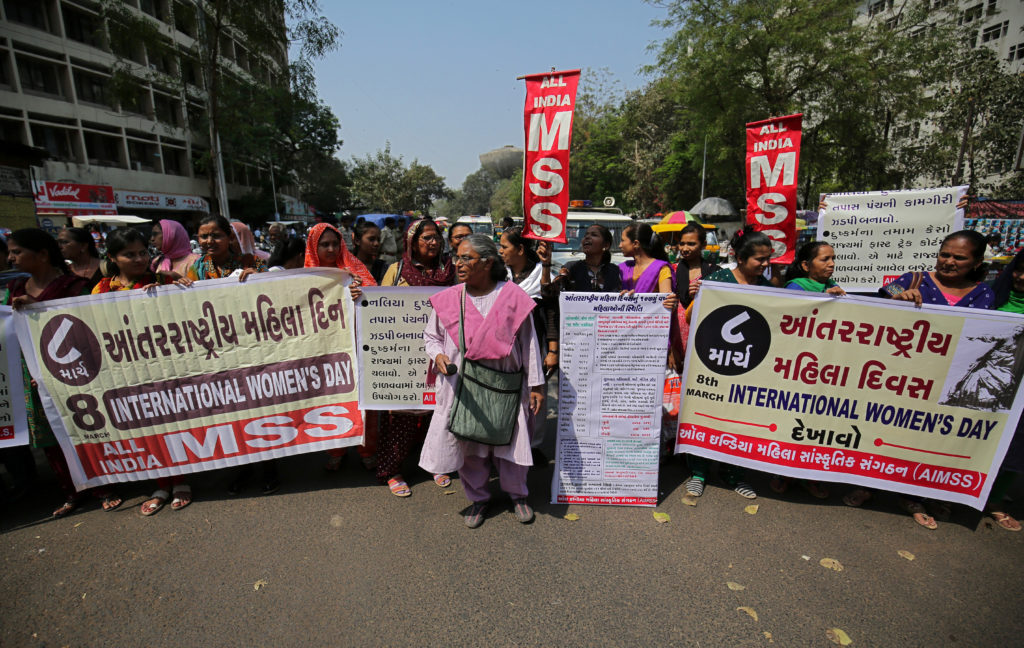 Demonstrators hold banners during a protest demanding equal rights for women on the occasion of International Women’s Day, in Ahmedabad, India. Photo by Amit Dave/Reuters

In India, hundreds of women, including students, teachers and sex workers, marched through the capital to bring attention to domestic violence, sexual attacks and discrimination in jobs and wages.

“Unite against violence against women,” one placard urged. “Man enough to say no to domestic abuse,” said another. “My body, My choice.”

India had its first female leader in 1966 when Indira Gandhi became prime minister, but Indian women are still often relegated to second-class citizenship.

In Africa, Ugandan President Yoweri Museveni urged men to stop physically abusing their wives. Domestic violence is common in Uganda, although victims rarely report perpetrators to the police for fear of being stigmatized or thrown out of their homes.

“If you want to fight, why don’t you look for a fellow man and fight?” Museveni said, calling domestic abusers cowards.

Back in Europe, the European Commission said in a statement published on Twitter that the continent “is one of the safest and most equal places for women in the world.” On the other hand, it noted that “the path to full equality in practice is still a long one.”

“The issue of gender equality is high on the agenda,” Frans Timmermans, the European Commission’s first vice-president, said, “but progress is still slow on the ground.”

German Chancellor Angela Merkel, considered by many to be one of the world’s most powerful women, echoed those sentiments, saying in a video message the struggle for greater equality in Germany and worldwide must continue. She said “many women before us have made sacrifices and fought persistently so that women would have more rights … but there’s still a lot to do.”

As if to prove that point, Belgian women’s groups spoke out angrily as the world of sport provided an immediate and visible target for their struggle.

The Belgian football federation, saying it did not want to be taken “hostage” by women’s groups, refused Thursday to back down from its decision to choose a rapper known for lacing his songs with misogynistic lyrics to produce its official World Cup song.

The Women’s Forum, a coalition of Belgian women’s groups, said it was unacceptable that an artist using degrading lyrics could be picked to produce what should be a unifying song.

Tim Sullivan in Delhi, Barry Hatton in Lisbon, Portugal, and AP correspondents around the world contributed to this report.

Left: A protester holds a banner reading "Fight Like A Girl" during a demonstration for women's rights on International Women's Day in Bilbao, Spain. Photo by Vincent West/Reuters

What a day on strike says about the women’s movement