DAVOS, Switzerland (AP) — Davos — the hub of an elite annual gathering in the Swiss Alps — is back, more than two years after the coronavirus pandemic kept its business gurus, political leaders and high-minded activists away. There’s no shortage of urgent issues for the World Economic Forum’s annual meeting to tackle.

With their lofty ambition to help improve the state of the world, forum organizers have their work cut out for them: there are soaring food and fuel prices, Russia’s war in Ukraine, climate change, drought and food shortages in Africa, yawning inequality between rich and poor, and autocratic regimes gaining ground in some places — on top of signs that the pandemic is far from over.

It’s hard to predict if the high-minded discussions will yield substantial announcements that make headway on the world’s most pressing challenges. 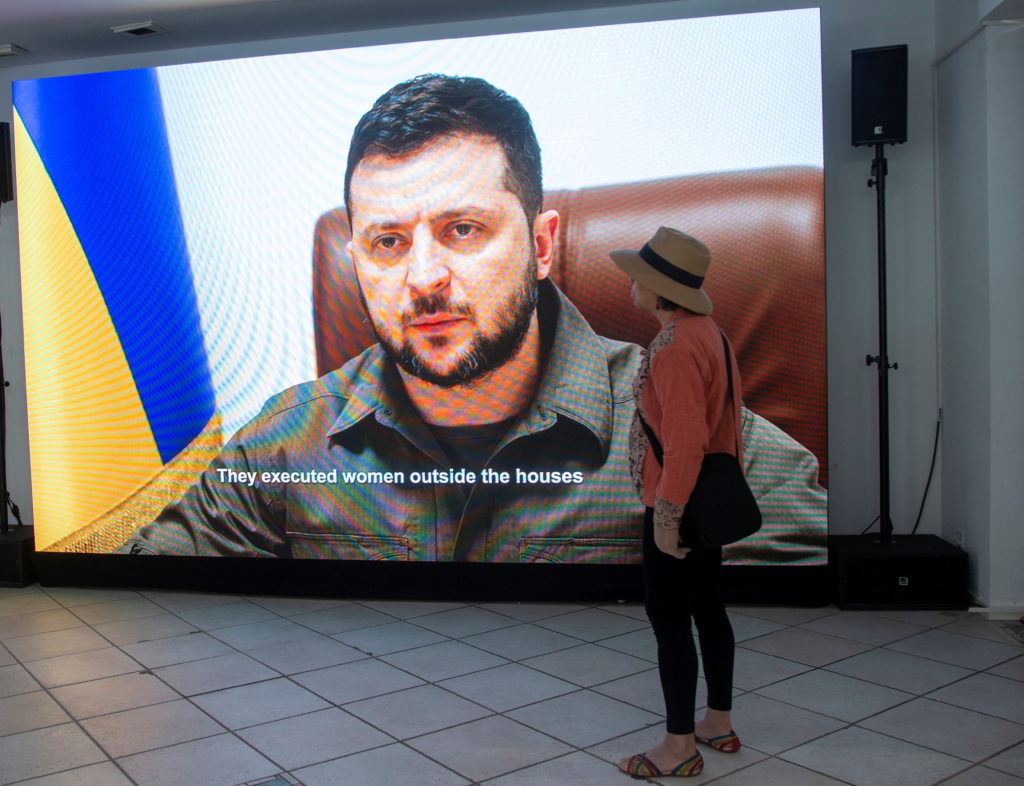 A woman watches the exhibition at the former “Russian House”, which Ukrainian artists have transformed into a “Russian War Crimes House” during the World Economic Forum (WEF) in the Alpine resort of Davos, Switzerland May 22, 2022. Photo by Arnd Wiegmann/Reuters.

The war in Ukraine will be a key theme. President Volodymyr Zelenskyy will speak on opening day Monday by video from Kyiv, while the country’s foreign minister and a sizable delegation of other top Ukrainian officials will be on hand. They’ll be joined this week by leaders like German Chancellor Olaf Scholz, U.S. climate envoy John Kerry, NATO Secretary-General Jens Stoltenberg and European Commission President Ursula von der Leyen.

“There’s no business as usual,” forum President Borge Brende told The Associated Press, saying Ukraine is not the only worry. “It is also climate change. It is also that the global growth is slowing, and we have to avoid that this very weak recovery ends with a new recession because we have very limited ammunition to fight a new recession.”

“A new recession will lead to increased unemployment, increased poverty,” he added. “So much is at stake.”

President Vladimir Putin’s war means Russian business and political leaders haven’t been invited to Davos this year. There will be no traditional “Russia House” social festivities with caviar and vodka spreads for the elite attendees of its evening fun.

Instead, critics — notably including Ukrainian tycoon Victor Pinchuk and the country’s Foreign Ministry — have seized on some symbolism and vowed to voice their disgust, which is shared by many around the world.

“This year, Russia is not present at Davos, but its crimes will not go unnoticed. The ‘Russia War Crimes House’ takes place inside the former Russia House,” organizers of the rechristened venue said in a press release.

Opening Monday, the venue will feature photos of crimes and cruelties that Russian forces are accused of perpetuating. Some victims will speak out — including Anatoliy Fedoruk, the mayor of Bucha, a town near Kyiv where images of killings of civilians drew outrage worldwide.

“It’s important to understand what is really happening in Ukraine,” said Bjorn Geldhof, artistic director of PinchukArtCentre, which is helping organize the exhibit. “Part of this exhibition is also to bring back a human face to those people who have become victim of these Russian war crimes.”

Brende, the forum president, says scores of CEOs and other business leaders will be looking into ways the private sector can support Ukraine, “in the situation where Russia is breaking international law, international humanitarian law, and not sticking to the U.N. Charter.” 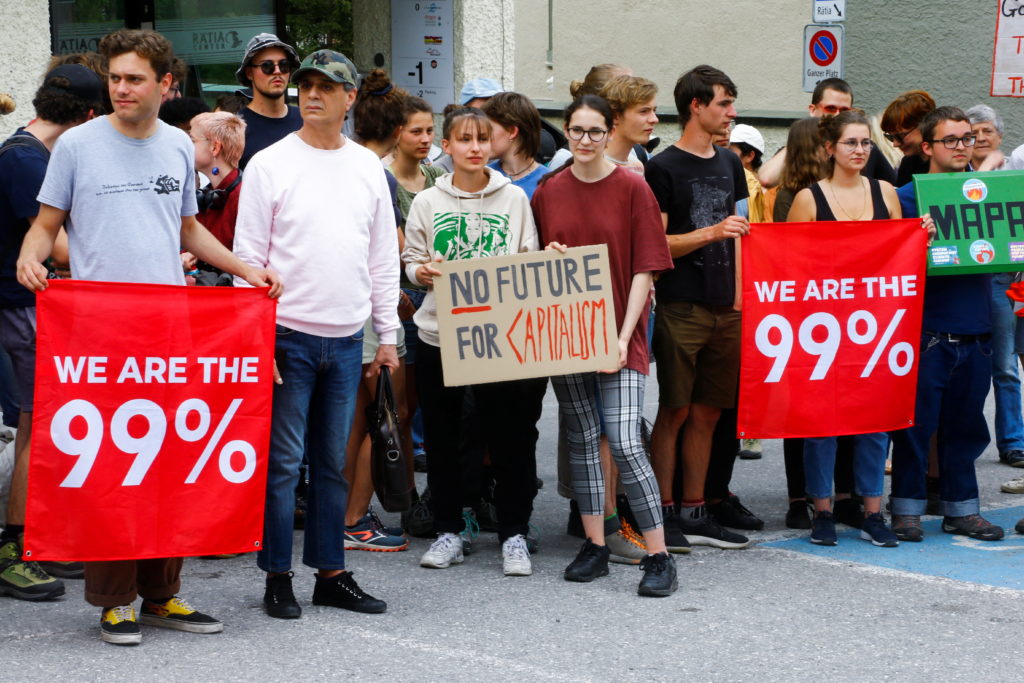 People display posters and banners to protest against the World Economic Forum (WEF) in the Swiss Alpine resort of Davos, Switzerland May 22, 2022. Photo by Arnd Wiegmann/Reuters.

Not everyone believe Davos is the place where solutions can be found.

A few dozen anti-capitalist demonstrators marching behind a “Smash WEF” banner clashed Friday with police in Zurich, Switzerland’s largest city, a sign of simmering antagonism against economic elites whom they accuse of putting profits over people. Police used rubber bullets and pepper spray to disperse the crowd in what was deemed an unauthorized gathering.

While Ukraine will capture attention on the meeting’s first day, climate and environmental issues will be a recurring, constant theme as the forum looks to future challenges as much as the current ones.

One-third of the roughly 270 panel discussions through Thursday’s finale will focus on climate change or its effects, with extreme weather, efforts to reach “net zero” emissions and finding new, cleaner sources of energy on the agenda.

Forum managers — who have faced criticism about hosting wealthy executives who sometimes fly in on emissions-spewing corporate jets — have increasingly tried to play their part and inoculate themselves against accusations of hypocrisy: Over the last five years, they say they have offset 100% of the carbon emissions from the organization’s activities by supporting environmental projects.

Experts say offsets can be problematic because there’s no guarantee they’ll deliver on reducing emissions.

Left: People are seen at the congress centre ahead of the World Economic Forum (WEF) annual meeting in Davos on May 21, 2022. - The world's political and business elite will hobnob in Davos next week after a two-year break caused by the Covid-19 virus, with the Ukraine war set to dominate the exclusive Swiss mountain summit. Photo by FABRICE COFFRINI/AFP via Getty Images