Ghana has its share of the myriad problems confronting any developing nation. But compared to the rest of the continent, especially this West African neighborhood — from blood-soaked Ivory Coast, Liberia or Sierra Leone to the chaos of Nigeria — Ghana is an oasis of nervous prosperity.

In a continent where autocratic strongmen are the rule, a vigorous democracy has become entrenched in Ghana over the past two decades. Two incumbent leaders have lost elections narrowly, by a margin of less than 1 percent in 2008. Yet on both occasions, sitting presidents have stepped aside and transferred power peacefully.

Last December, the first crude oil began flowing from offshore fields, adding a lucrative new export to a country that already has gold, diamonds and cocoa. Across Africa, the discovery of mineral wealth, oil in particular, has come to be known as the “resource curse.” Corrupt governments and their foreign collaborators have siphoned billions for personal gain, leaving the vast majority of citizens more deeply impoverished. Fears that Ghana could go the way of a Nigeria are commonly discussed on this country’s thriving talk shows, and there’s vigorous debate over how oil revenues should be spent. There also are worries about weak regulations and still-entrenched corruption. Yet there’s qualified optimism that Ghana can avoid the plight of Nigeria, Angola and similar oil-rich cases.

“We’re lucky that we discovered oil after we had democracy,” says Patrick Awuah. He’s one of a steady stream of Ghanaian social entrepreneurs, many of them returned from abroad. Awuah is the founder and president of a new liberal arts university called Ashesi (“beginning”). He gave up a career at Microsoft to return to his native land, where only 5 percent of college-age students attend college. If only because of their small number, this group is bound to be “running the courts, building the hospitals and schools,” he says.

According to Awuah, who consulted with the University of California, Berkeley and his alma mater, Swarthmore, to design the curriculum, “the mission is to educate a new generation of ethical leaders.” He also took as a model India’s elite, highly acclaimed Institute of Technology system, which is credited with vaulting that country forward: “In the same way, we feel in Africa, if we can educate problem solvers … in engineering and the sciences, that combination is very powerful.” About 450 students attend Ashesi, which is building a large new campus on the outskirts of the capital, Accra. 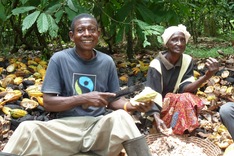 Despite all the promise in this bustling capital, the majority of Ghana’s 23 million people — and much of its poverty — reside in the rural hinterland. Creating sustainable new economic activities and livelihoods here — far more than jobs in the oil sector — will be critical if Ghana is to achieve its oft-stated goal of becoming a middle-income nation, like Thailand or Malaysia.

A number of socially minded businesses are working in rural areas. In the northern region, they have focused on shea nuts. In the past, most of the nuts have been exported to Europe and America to be processed into shea butter, a prized ingredient in highbrow lotions and soaps. But now, several small processing enterprises have emerged locally, near the town of Tamale, employing hundreds of women.

“When you pick the nuts and sell, that is just the end of it,” says Rita Dampson, one such entrepreneur who also makes small quantities of soap for the local markets. “So we decided to do the processing more than exporting of the nuts.” Projects like hers depend heavily on buyers who emphasize social mindedness in their brand marketing — like the Body Shop chain.

In the lush central region, one of the world’s most prolific producers of cocoa beans, the focus is on getting a better price for this prized commodity. A home-grown cooperative called Kuapa Koko has negotiated fair-trade prices from a number of buyers in the West. It’s brought meaningful if incremental improvement to the lives of Kuapa’s 1,200 farmer members and their rural communities: a bore well for clean drinking water or latrines or a school building. It has enabled Kojo Tane (pictured above) to send his children to school and university. They stand a much better chance of tasting the prosperity has Ghana seems to promise today. For his part, Tane, despite a life time of hacking, drying and fermenting beans out of the cocoa pods, only got his first taste of chocolate at age 48.

Stay tuned for Fred de Sam Lazaro’s report from Ghana on the NewsHour.