One of the driving forces behind the Arab Spring, some contend, is the high cost of food. A combination of shrinking farmlands, weather and poor water allocation is helping contribute to higher prices and, in turn, anti-government sentiment, according to analysts. 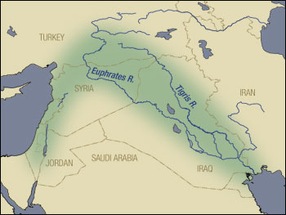 In the region of the Middle East and North Africa known as the Fertile Crescent (map at right by NASA), the Tigris and Euphrates rivers created a bed of farmable land stretching from Turkey through Syria and Iraq.

The Nile River, flowing through the Egypt and toward the Fertile Crescent, helped foster fertile land as far south as Ethiopia. The region also is surrounded by the Mediterranean Sea, the Red Sea, and the Persian Gulf.

But the land and water that once fed the people of the Arab world is no longer sufficient. More than 50 percent of the food consumed in the Middle East and North Africa is imported, according to a 2008 study by the World Bank.

The food shortage problem is not confined to the Middle East. Food prices worldwide have hit new highs this year. But in the Middle East, they could be contributing to civil unrest, analysts say.

“I think that the prices of food mobilized people,” said Rami Zurayk, an agronomy professor at the American University of Beirut.

“If you look at Tunisia, for example, you see that the Tunisian uprising started in the rural area,” where many small farmers live and are just looking for a means to support themselves and their families, said Zurayk. There, a young man running a vegetable stand set himself on fire to protest corruption, and many people see his action as the start of the Arab Spring.

“And the Syrian uprising started in Daraa, which incidentally, is in the center of the Horan plains [in the south near Jordan]…one of the centers of origin of wheat and wheat farming in this part of the world,” he said.

In Egypt, about 32 percent of the population works in agriculture, according to the CIA World Factbook. Many of those people are small farmers looking to hand down their land from generation to generation.

But with the growth of these families, “The land cannot support second or third generation [farmers]; they have to go out and find a job [elsewhere],” said professor Hamdy Oushy of the College of Agriculture, Consumer and Environmental Sciences at New Mexico State University.

“The young people cannot work in the fields as they would have,” and instead live in the city, where they cannot find work either. The growing frustration among these youth pushed them into the streets in protest, Oushy said.

Adding to the pressures is a limited water supply, particularly in the Middle East, which is experiencing a drought.

According to the World Bank’s findings, some governments focus on damming water rather than more efficiently distributing it. The region could have better farming outputs if governments helped facilitate more efficient use of water, such as subsidizing new irrigation systems to encourage farmers to stop using the method of flooding their fields, the World Bank concluded.

In general, according to Oushy and Zurayk, the governments of the region should direct more resources toward farmers and their land, rather than mainly urban areas, and that will help quell discontent in the long run.

This post has been updated from its original version.