This New Year’s Eve is being celebrated like no other in most of the world, with many bidding farewell to a year they’d prefer to forget.

From the South Pacific to New York City, pandemic restrictions on open air gatherings saw people turning to made-for-TV fireworks displays or packing it in early since they could not toast the end of 2020 in the presence of friends or carousing strangers.

As midnight rolled from Asia to the Middle East, Europe, Africa and the Americas, the New Year’s experience mirrored national responses to the virus itself. Some countries and cities canceled or scaled back their festivities, while others without active outbreaks carried on like any other year.

Australia was among the first to ring in 2021. In past years, 1 million people crowded Sydney’s harbor to watch fireworks. This time, most watched on television as authorities urged residents to stay home to see the seven minutes of pyrotechnics that lit up the Sydney Harbor Bridge and its surroundings.

In New York’s Times Square, the ball dropped like always, but police fenced off the site synonymous with New Year’s Eve to prevent crowds of any size from gathering.

Another of the world’s most popular places to be on December 31, Dubai in the United Arab Emirates, pressed ahead with its revelry despite a surge of infections. Images of masked health care workers briefly lit up Burj Khalifa, the world’s tallest tower, before fireworks exploded in the sky over the building. Tens of thousands of people flooded the streets and squares marked out for social distancing were largely ignored.

Still, the pandemic robbed the night of its freewheeling spirit. Authorities implemented a raft of anti-virus measures to control rowdy crowds in downtown Dubai. At luxury bars and restaurants, music blared and people drank, but dancing was strictly prohibited. 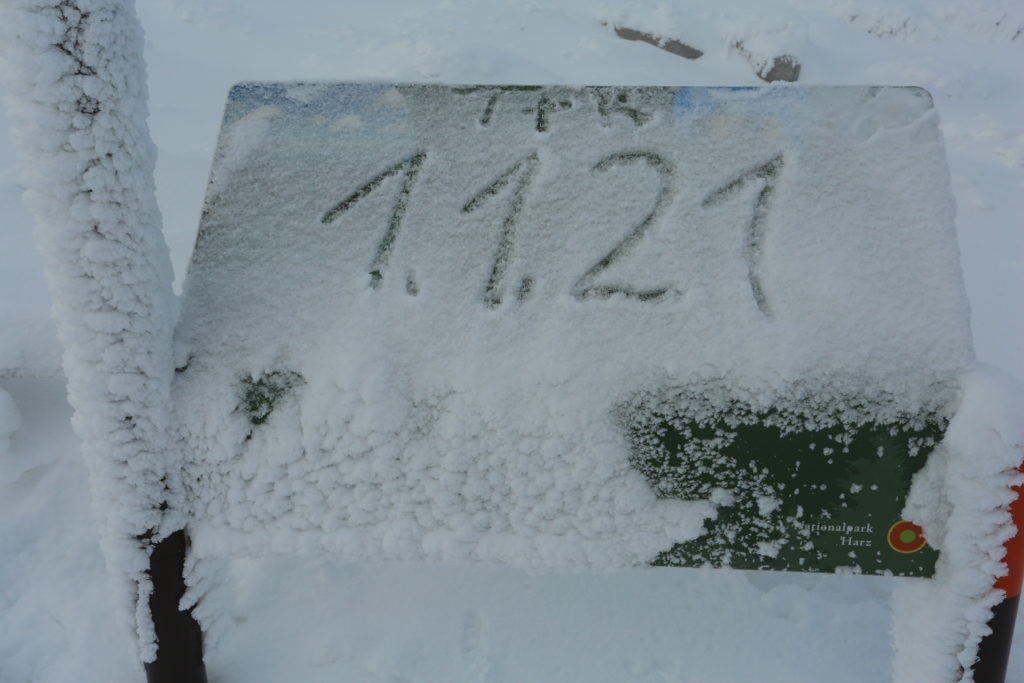 The New Year’s date “1.1.21” is written on a sign on the Brocken in Germany. On New Year’s Day, hikers enjoy a wintry New Year’s walk in the Harz Mountains. Photo: Matthias Bein/dpa-Zentralbild/ZB (Photo by Matthias Bein/picture alliance via Getty Images)

The gleam of Las Vegas brought a similar crowd, with tens of thousands of people walking on the Strip by early evening despite a plea from the governor to avoid gatherings.

South Africans were also urged to cancel parties. Many instead lit candles as a way to honor health workers and people who have died in the COVID-19 pandemic.

In many European countries, authorities warned they were ready to clamp down on revelers breaching public health rules, including nightly curfews in France, Italy, Turkey, Latvia, the Czech Republic, and Greece.

“No one will be on the streets after 10 p.m. (Athens) will be a dead city to make sure no more restrictions are imposed,” said Greece’s public order minister, Michalis Chrisohoidis.

A few families gathered in Madrid’s sunny central Puerta de Sol square to listen to the rehearsal of the traditional ringing of the bells that is held at midnight. They followed the Spanish custom of eating 12 grapes with each stroke of the bells before police cleared the area that normally hosts thousands of revelers.

“That’s it, life goes on. Despite what happened we have to celebrate,” said Cesar Pulido, 32, who celebrated in Madrid. “We have to eat the 12 grapes in order to ask 12 wishes like health, love, money, everything and good vibes.” 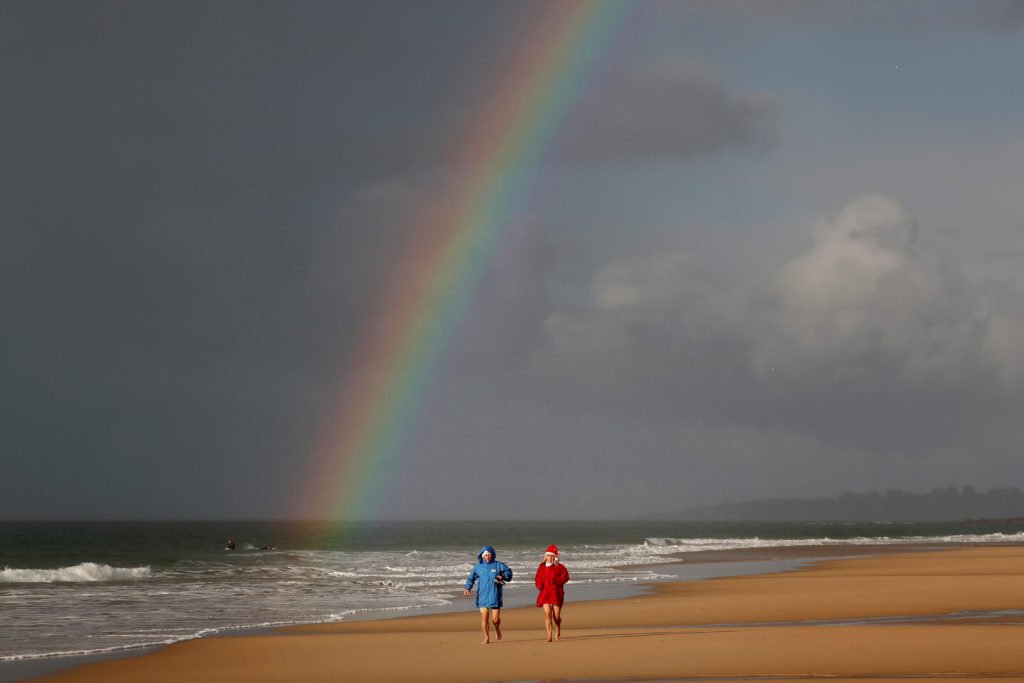 The rainbow is seen as people run at the Carcavelos beach during a traditional sea bath to welcome the new year, in Cascais, Portugal on January 1, 2021. (Photo by Pedro Fiúza/NurPhoto via Getty Images)

As the clock struck midnight, fireworks erupted over Moscow’s Red Square and the Acropolis in Athens, but the explosions echoed across largely empty streets as people obeyed orders to stay home.

From Berlin to Brussels, normally raucous celebrations were muted by the pandemic.

Even the British government, keen to celebrate the U.K.’s definitive split from the EU, ran ads imploring the public to “see in the New Year safely at home” amid a record number of newly confirmed cases. London’s annual New Year’s Eve fireworks display was canceled, but an unannounced display was broadcast before midnight, with tributes to health care workers, a reference to the Black Lives Matter movement and even a voice saying “you’re on mute” in reference to a bugbear of virtual work meetings.

In Scotland, residents normally mark the new year with parties and “first footing,” where a home’s first visitor of the year comes bearing gifts. The tradition is among the list of activities the government warned against.

“No gatherings, no house parties, no first-footing. Instead, we should bring in 2021 in our own homes with just our own households,” Scotland’s First Minister Nicola Sturgeon said.

Many around the world looked toward 2021 with hope, partly due to the arrival of vaccines that offer a chance of beating the pandemic.

“Although this was a very difficult year, a year of many losses, I’m grateful to be safe, to follow the rules, to do my part,” said Marilia Rafael, 33, who celebrated in Portugal, “and would like to ask that the next year may be better for all of us, may it be a year of hope, peace and love.”

More than 1.8 million deaths worldwide have been linked to the coronavirus since the start of the pandemic.

Some leaders, such as German Chancellor Angela Merkel, used their New Year’s address to thank citizens for enduring hardship during the lockdown and criticize those who defied the rules. Others, like Italy’s President Sergio Mattarella, flew the flag for science, urging citizens to discard their fears about getting immunized against COVID-19.

“Faced with an illness so highly contagious, which causes so many deaths, it’s necessary to protect one’s own health and it’s dutiful to protect those of the others – family members, friends, colleagues,’’’ said Mattarella, 79.

In Brazil’s Rio de Janeiro, where official fireworks and celebrations also were canceled to limit the rapid spread of the virus, police officers braced for what promised to be a long night. 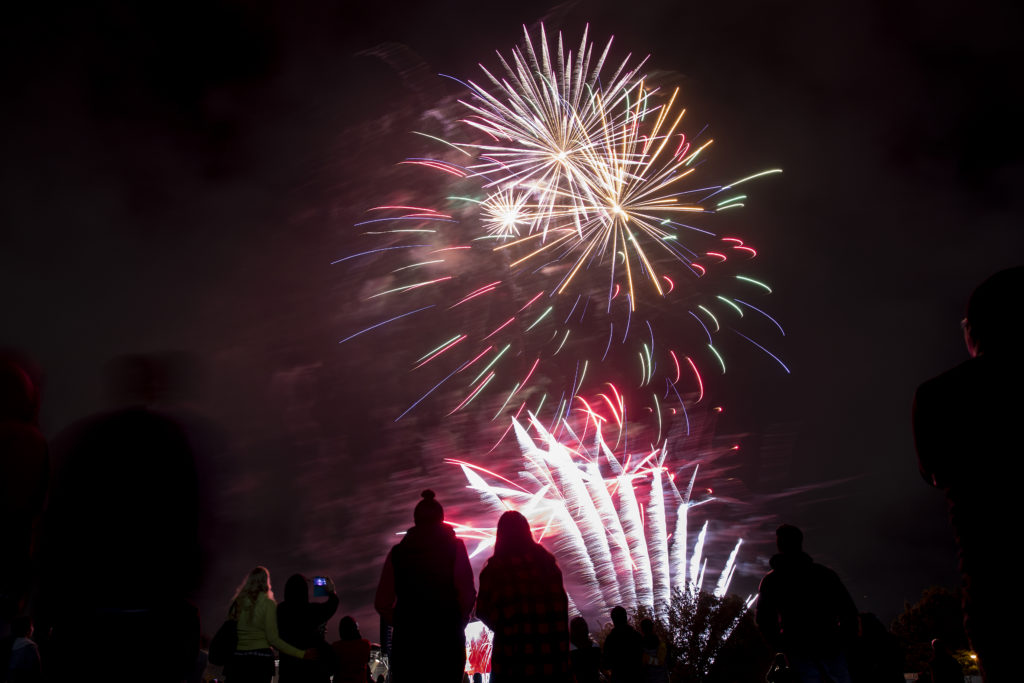 People watch fireworks during New Year’s Eve celebrations in Christchurch, New Zealand on January 01, 2021. The south Pacific island nation Samoa was the first to mark the new year at 10am GMT, followed by New Zealand at 11am GMT.  (Photo by Sanka Vidanagama/NurPhoto via Getty Images)

Rio officials decided to seal off Copacabana, where millions of people dressed in white usually gather on the beach to marvel at fireworks and attend large concerts. This year, between 8 p.m. and 6 a.m. on Jan. 1, only local residents will be able to access the city’s iconic shore, authorities said.

In South Korea, Seoul’s city government canceled its annual New Year’s Eve bell-ringing ceremony in the Jongno neighborhood for the first time since the event was first held in 1953, months after the end of the Korean War.

New Zealand, which is two hours ahead of Sydney, and several of its South Pacific island neighbors that also have no active COVID-19 cases held their usual New Year’s activities.

In Chinese societies, the virus ensured more muted celebrations of the solar New Year, which is less widely observed than the Lunar New Year that in 2021 will fall in February. Initial reports about a mystery respiratory illness sickening people in the Chinese city of Wuhan emerged exactly a year ago.

___
Jordans reported from Bonn, Germany, and Gatopoulos from Athens, Greece. AP reporters around the world contributed to this report.

Left: A view of the Ball Drop on the One Times Square building during the 2021 Times Square New Year's Eve Celebration on December 31, 2020 in New York City. (Photo by Roy Rochlin/Getty Images)