Rating Nuclear Accidents and Incidents: Which Were the Worst?

With three reactors having at least partial meltdowns at the Fukushima Daiichi power plant in Japan, the country raised the alert level from four to five on a seven-point international scale for atomic incidents Friday.

The International Atomic Energy Agency uses the International Nuclear and Radiological Event Scale to assess the damage done by nuclear accidents. Learn more about the event scale below, and read about some of the worst nuclear disasters in history: 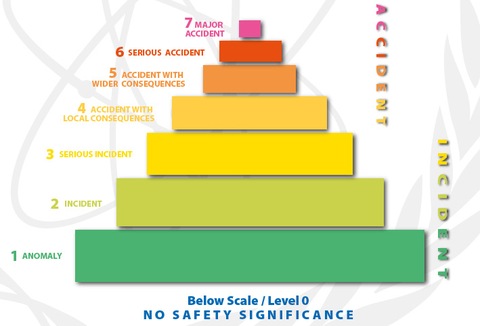 The INES scale, image by the International Atomic Energy Agency

1986 — Chernobyl, Ukraine
A nuclear reactor located at a power plant in Chernobyl experienced a steam explosion and fire that caused a meltdown, releasing massive quantities of radioactive material. A significant fraction of the reactor core inventory was released, and contaminated areas of Belarus, Ukraine and the Russian Federation. There were widespread health and environmental effects.

Nuclear Energy Agency reports there were 31 fatalities immediately following the incident, with latent deaths estimated at between 9,000 and 33,000 over the 70 years after, based on current radiation dose risks.

More than five million people received low whole-body doses of radiation, about 1,000 emergency workers received the highest doses of radiation, some of them fatal. By 2002, more than 4,000 thyroid cancer cases were diagnosed among people who were children at the time and ingested radioactive iodine, often through contaminated milk.

1957 — Kyshtym, Soviet Union
An explosion at a Soviet nuclear weapons plant in Kyshtym resulted in the release of “significant” radioactive material to the environment. The incident forced the evacuation of over 10,000 people from the area contaminated by the blast.

Level 5
Accident with Wider Consequences: A limited release of radioactive material likely to require implementation of some planned countermeasures and several deaths from radiation.

1979–Three Mile Island, Pennsylvania
A cooling malfunction caused part of the core to melt in a reactor, resulting in a limited off-site release of radioactivity over a multi-state area. Doses off-site were less than normal background radiation.

The Nuclear Regulatory Commission determined the accident “led to no deaths or injuries to plant workers or members of the nearby community.”

1957–Windscale Pile, Great Britain
A fire in a reactor core resulted in a limited off-site release of radioactivity. Radioactive dust was detected in Belgium, Germany and Norway. It caused an estimated 200 cases of cancer in Britain.

1952– Chalk River, Canada
The first-ever accident at a nuclear reactor. A reactor shutoff rod failure, combined with several worker errors, led to a major power excursion of more than double the reactor’s rated output. Former President Jimmy Carter, then a U.S. Navy officer based in Schenectady, New York, was among those dispatched by the U.S. to help in the emergency response.

Level 4
Accident with Local Consequences: A minor release of radioactive material unlikely to result in implementation of planned countermeasures other than local food controls.

2006 — Fleurus, Belgium
Severe health effects for a worker at a commercial irradiation facility as a result of high doses of radiation.

1999 — Tokaimura, Japan
An accident at a uranium processing plant in Tokaimura exposed 55 workers to radiation; one died.

1993 –Tomsk, Russia
Pressure buildup led to an explosive mechanical failure. No deaths were reported after the explosion, and no one was evacuated from the contaminated region.