The world is currently facing the worst migration crisis since World War II: millions are displaced and thousands have died this year alone. A substantial number of those fleeing their home countries are from Syria, Afghanistan and Iraq, collectively making up more than half of all asylum-seekers around the world in 2015, according to the U.N. refugee agency.

Their plight has had a profound effect on global politics, which have gotten only more complex following the November terrorist attack in Paris that prompted Europe to grapple more intensely with security and its open borders. To help clarify how and why the situation has had such an extensive effect on different countries, here is a region-by-region look at where these migrants have traveled and how governments have responded. 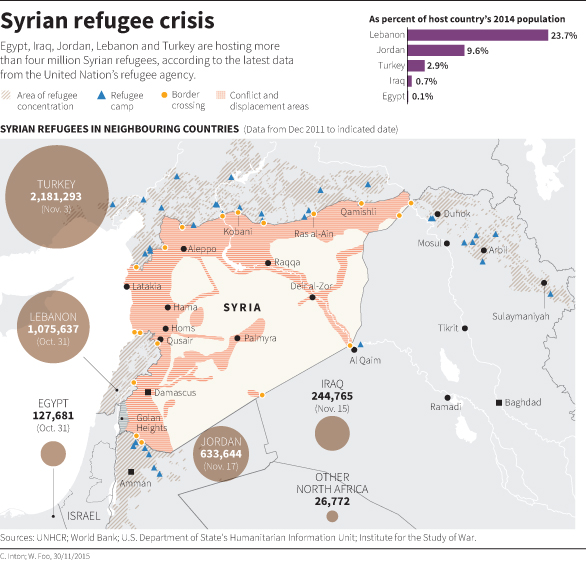 Turkey currently hosts the largest number of Syrian refugees of any country in the world. Since the crisis began, Turkey has accepted more than 2 million refugees, more than double that of any other nation. Lebanon also has taken in a sizable number, with just over 1 million currently living in the country. This number represents a quarter of Lebanon’s total population, and means that Lebanon hosts the world’s highest percentage of refugees per inhabitant. Jordan and Iraq also have accepted a substantial number of Syrian refugees.

Life isn’t easy for refugees in these countries. In Turkey, Lebanon and Jordan, they do not have official permission to work. Most do informal or under-the-table work, and many operate from their savings until it runs out. In Lebanon, the U.N. estimates that nearly 90 percent of refugees are in debt. Additionally, almost half of the Syrian refugee children in Lebanon do not attend school, largely due to the prohibitive cost of education and their need to work to earn money for their families.

To the south, the richer Gulf nations of Qatar, the United Arab Emirates, Saudi Arabia, Kuwait and Bahrain have not signed on to refugee conventions, and therefore have not formally accepted any Syrian refugees.

While the number is smaller, many migrants coming from Middle Eastern conflict zones endeavor to apply for asylum in Europe instead of settling in closer countries. The main path for them is to travel from Turkey across to Greece, up through the Balkan states, typically from Macedonia into Serbia, then on to Hungary or Croatia, then Slovenia, and finally into Austria and Germany. So far in 2015, almost 800,000 people have chosen this route. According to the U.N., 93 percent of those traveling this route are from Syria, Afghanistan and Iraq. 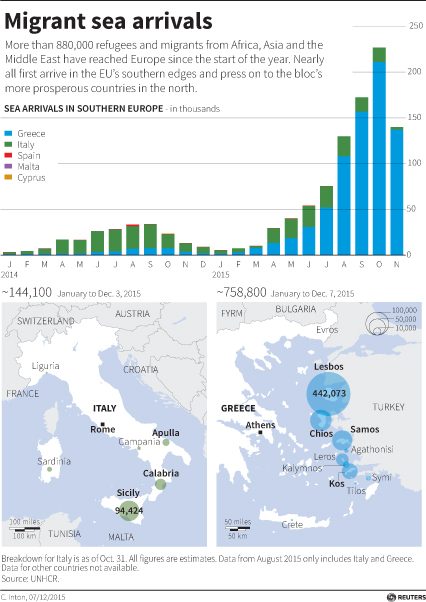 The journey is perilous. This year alone, over 3,500 people have either died or went missing trying to cross seas to Europe. Even the land route is not completely safe. Incidents such as one where smugglers left 71 migrants to suffocate in a truck outside of Vienna illustrate just how dangerous it can be.

There also are numerous difficulties for countries hosting refugees. From September to November, nations along the route from Turkey to Austria received between 1,000 to 12,000 migrants per day, with the median number of persons crossing the various borders daily hovering around 5,000. Registering the large number of people is a huge logistical challenge for most countries, as is providing shelter and food.

In order to avoid a large influx of migrants arriving, many countries have begun attempting to control the flow through their borders. Hungary has built a razor wire fence along its border with Serbia and Croatia, effectively closing it and forcing most migrant traffic through Slovenia. Both Slovenia and Macedonia also are erecting fences, although they state that these are merely intended to direct migrants to legal crossings.

Since the Paris attacks, the Balkan nations (Macedonia, Croatia, Serbia and Slovenia) have declared that they will only allow Syrians, Afghans and Iraqis across their borders. This policy is leaving many people stranded, and has in some cases led to violent clashes with police.

INSIDE THE EUROPEAN UNION 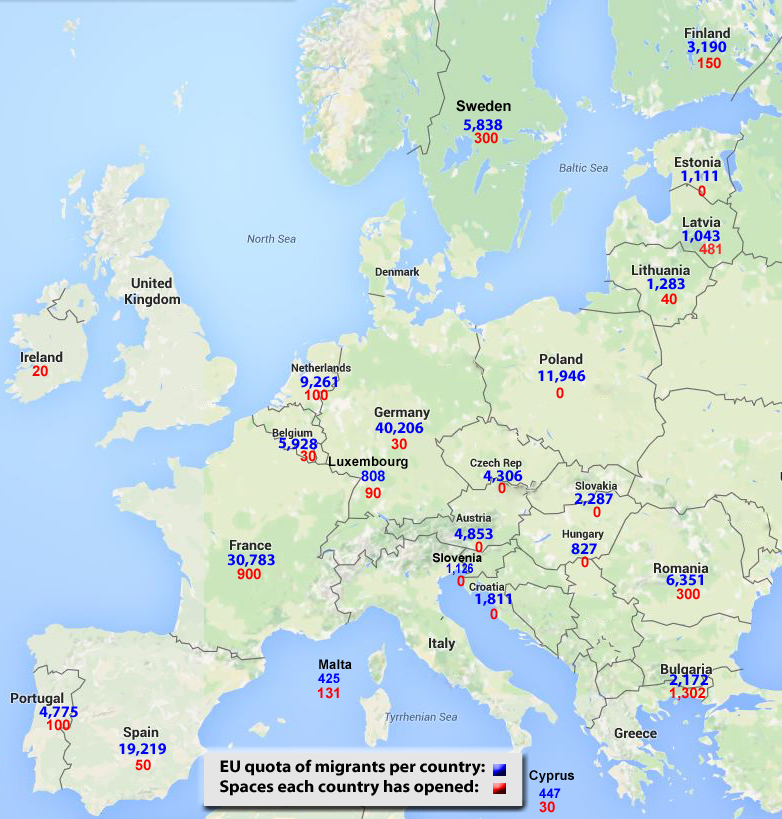 Since 2013, the system Europe has had in place for dealing with those seeking asylum is the Dublin Regulation. Under that rule, people wishing for asylum are required to register at the first country in which they arrive. These measures are meant to prevent migrants from applying for refugee status in countries with the most liberal policies.

However, the regulations have begun to break down in the wake of the migrant crisis, especially as some countries have been taking in disproportionately large numbers of asylum seekers. Greece, which has teetered on the edge of financial ruin, cannot cope with registering the large numbers of migrants it receives. Out of almost 1 million applicants in Europe this year, Germany has received over 350,000.

In an attempt to develop a unified response to the situation, in May and again in September, the EU approved relocation plans. Under the plans, 160,000 migrants would be moved from Italy and Greece to other EU countries. Each country was given a quota of migrants to take in, based on their GDP, unemployment rate, population and how many asylum seekers they had already accepted.

The move was controversial. Unlike most EU issues involving national sovereignty, it was not approved by consensus, but instead by majority vote. Romania, the Czech Republic, Slovakia and Hungary voted against it, while Finland abstained. Additionally, the United Kingdom, Denmark and Ireland all had “opt-outs” for the agreement. Ireland, however, offered to accept 2,900 extra refugees, while Denmark agreed to take in an extra 1,000. Instead of participating in the quota plan, the UK has said it will take an extra 20,000 refugees over the next four years directly from camps in the Middle East.

Since the plan’s approval, just over half of the nations involved have made places available for refugees. Of those, only six (Luxembourg, Finland, Sweden, France, Germany) have taken in refugees.

As they stand, the relocation plans still do not provide a permanent solution to the crisis, as people continue to pour out of Syria, Afghanistan and Iraq every day.
Follow @NewsHourWorld

Left: Afghan refugees arrive by dinghy on the Greek island of Lesbos. Photo by Alkis Konstantinidis/Reuters