Insofar as we esteem the creations that last—Homer's Odyssey, the bridge still standing, enduring love—let us now praise the twin Voyager space probes, launched 40 years ago and currently departing the solar system to drift forever among the stars.

Each about the size and weight of a subcompact automobile, the Voyagers epitomize 1970s high tech. Their computers are weaker than those in today's digital watches, their analog TV cameras more primitive than the ones that shot Laverne & Shirley. But they made history at every planet they reconnoitered—confirming, as Voyager chief scientist Ed Stone put it, that "nature is much more inventive than our imaginations."

Jupiter, which looks serene through a telescope, was shown by Voyager to have hundreds of raging hurricanes, a glowing aurora at the north pole, and three thin rings. Saturn's rings, previously countable on the fingers of one hand, turned out to include thousands of ringlets and seemingly braided components that theorists had assumed were impossible. ("We thought we knew it all," said astronomer Brad Smith. "Ha!") Active volcanoes, formerly found only on Earth, turned up in abundance on Jupiter's satellite Io and, astoundingly, on Neptune's Triton, where nitrogen geysers were observed erupting at 40 degrees above absolute zero on the Kelvin scale. Two of the solar system's most promising environments for finding alien life—Jupiter's icy moon Europa and Saturn's Enceladus—were unveiled by the Voyager mission. Their cores palpitated and heated by tidal interactions, Europa and Enceladus appear to sustain vast, briny oceans beneath the ice, where living organisms might thrive.

A big-science endeavor that consumed some 10,000 work-years, the mission has been described as "one of the greatest voyages of exploration ever conducted by our species."

Yet it almost didn't happen.

The prospect of a "grand tour" of the outer planets emerged in 1965 from the musings of an aeronautics graduate student named Gary Flandro, then working part-time at NASA's Jet Propulsion Laboratory in Southern California, the world's preeminent center for interplanetary exploration. At age six, Flandro had been given Wonders of the Heavens, a book that showed the planets lined up like stepping-stones. "I thought about how neat it would be to go all the way through the solar system and pass each one of those outer planets," he recalled.

Assigned at JPL to envision possible missions beyond Mars, Flandro plotted the future positions of Jupiter, Saturn, Uranus, and Neptune with paper and pencil. He found that they would align in such a way that a spacecraft could tap the planets' orbital momentum to slingshot from one to the next, gaining enough velocity to visit all four planets within 10 or 12 years rather than the decades such a venture would require otherwise. The mission launch window would open for a matter of months in the late 1970s, then close for another 175 years.

It was an ambitious idea at a time when the apex of interplanetary exploration was Mariner 4 shooting 21 grainy photos as it flew past Mars. No probe had ever functioned for anything close to a decade in space. None had the intelligence to manage complex planetary encounters at vast distances without constant human hand-holding. Playing crack-the-whip past multiple planets might work in theory but had never been attempted in practice. "I was told, 'This is impossible; stop wasting my time,'" Flandro recalled. 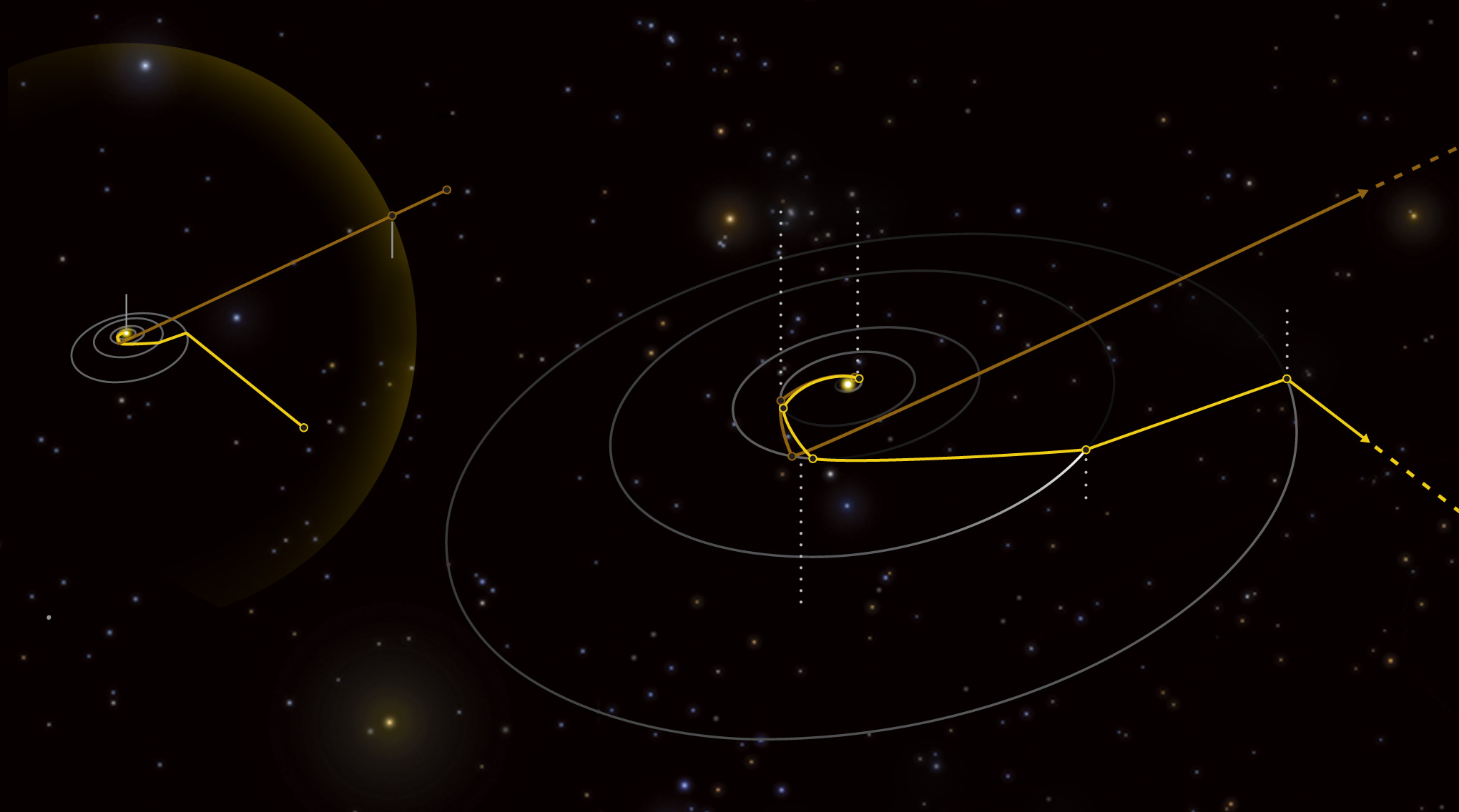 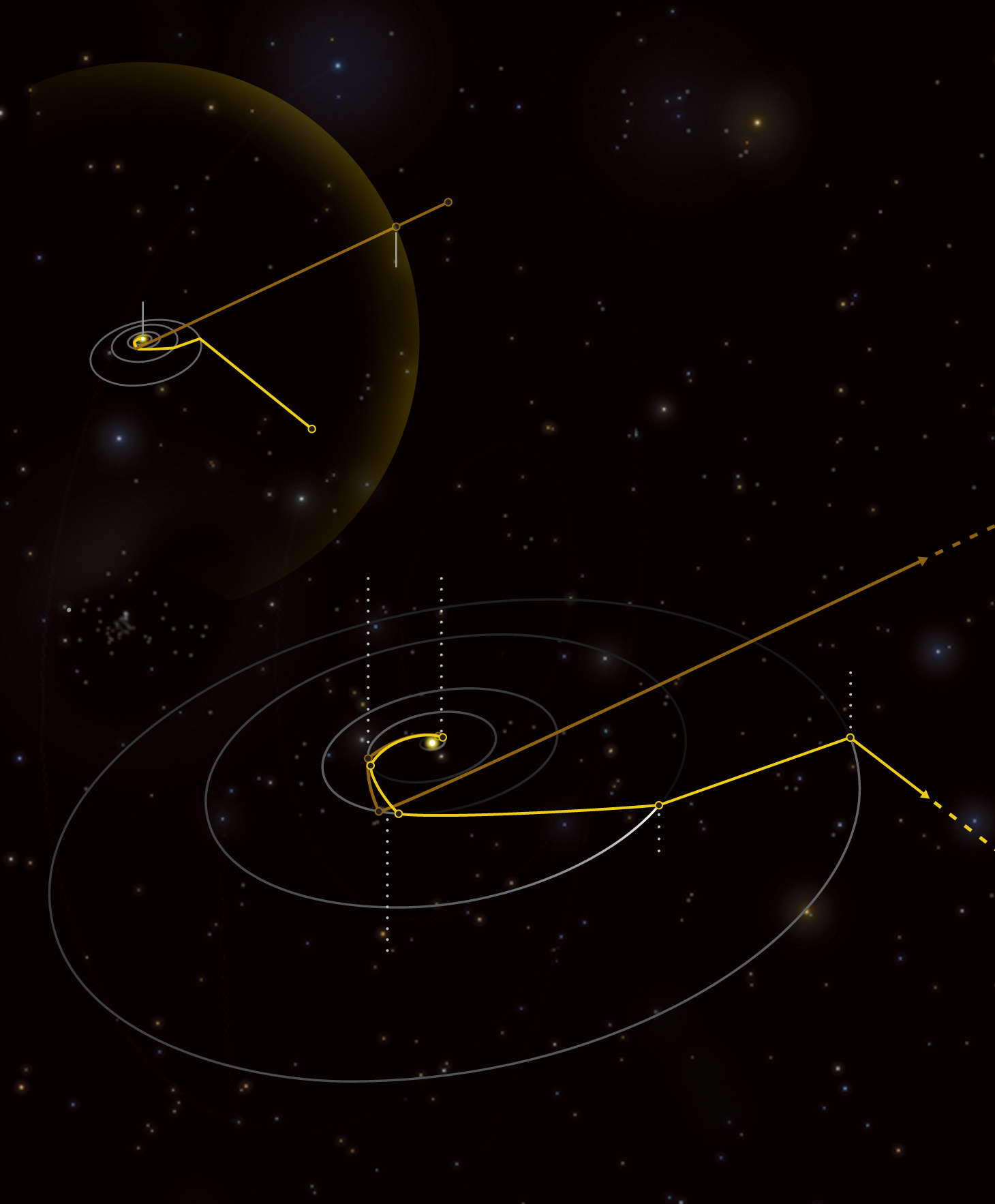 NASA swallowed hard and proposed a grand tour mission anyway, but Congress rejected it, instead approving a cheaper, stripped-down version that would venture out no farther than Saturn.

The JPL spacefarers responded in the tradition of the hardiest explorers of earlier epochs. They cheerfully agreed to the plan, assured one another that Congress didn't really understand the situation, and quietly went to work designing and building two tough, smart spacecraft capable of going all the way to Neptune. Any "life limiting" flaws in the probes' design were weeded out. The sun sensors in their navigation systems were boosted so they could function out where the sun gets dim. Fuel-saving techniques were developed to keep the mission viable long after it was supposed to end. "We just did it and didn't talk about it," recalled William Pickering, JPL's director at the time.

The ruse worked. Once Voyager had proved to be both a scientific cornucopia and a globally popular emissary to the great beyond, Congress funded the extended mission that JPL had surreptitiously been managing all along.

The Voyagers paved the way for the Jupiter orbiter Galileo and the Saturn orbiter Cassini that followed, which spent years gathering photos and data before being ordered to incinerate themselves in the planets' upper atmospheres to ensure that they'd never impact and contaminate a possibly life-harboring moon. Now the Voyagers as well are nearing the end of their scientific life. Their weakening radio signals, currently reporting on the surprisingly complex plasma bubble that surrounds the sun and marks the designated boundary between the solar system and interstellar space, are expected to fall silent around 2030, when the Voyagers' plutonium-powered electrical generators finally falter.

Thereafter the Voyagers will function more as time capsules than spaceships. With that eventuality in mind, JPL attached to each probe a copy of the "golden record" that contains music, photographs, and sounds of Earth for the benefit of any extraterrestrials who might intercept it someday. The records should remain playable for at least a billion years before succumbing to erosion from micrometeorites and the high-velocity subatomic particles called cosmic rays.

That's a long time. A billion years ago, the most complex forms of life on Earth were the tidewater mats of cyanobacteria called stromatolites. A billion years from now, the brightening sun shall have begun boiling off Earth's oceans. Yet the Voyagers will still be out there somewhere, emissaries of a species that dispatched them without hope of return.

Timothy Ferris, the producer of Voyager’s golden record, wrote on dark matter in the January 2015 issue of National Geographic magazine. This story appears in the August 2017 issue. Story produced in partnership with HHMI Tangled Bank Studios.