When Voyager left Earth in 1977, it carried scientific instruments that sent vast amounts of data back to Earth. This was mid-1970s technology that has weathered the decades and the harshness of space with aplomb. The scientific equipment is perched around the central, 10-sided bus, which contains and protects the spacecraft's electronics.

Note: *Starred instruments (below) are still working on one or both of the Voyager spacecraft. The others have malfunctioned or been turned off to save power. 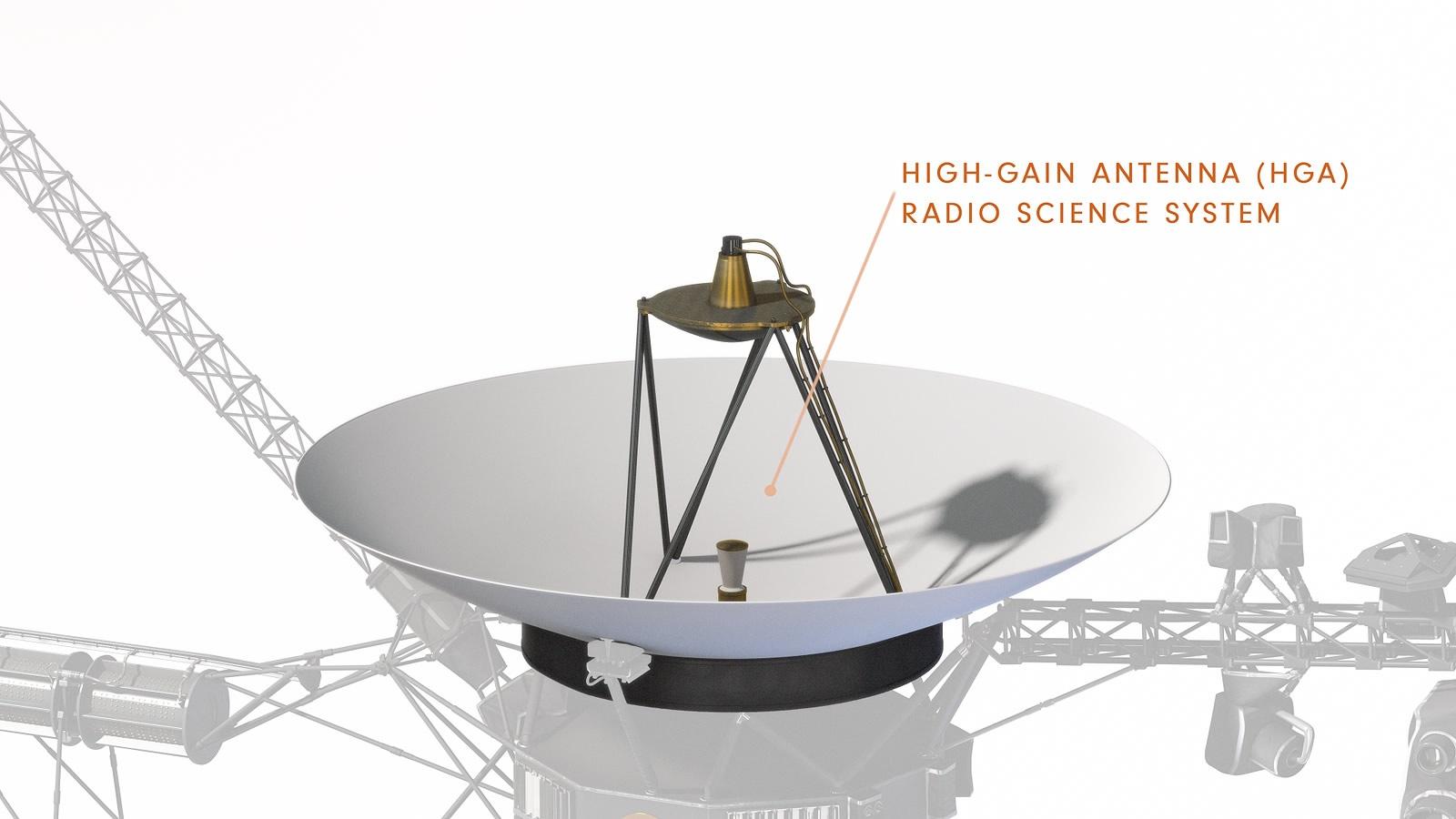 The HGA, a 12.1-foot reflector dish, transmits scientific and engineering data from the spacecraft to Earth using radio signals, which are picked up by NASA's Deep Space Network (DSN)—an array of giant, incredibly sensitive radio antennas. Voyager 1 is almost 13 billion miles away. Its signal takes more than 19 hours to reach Earth, and the power of that signal is less than 1 trillionth of a watt when it hits the DSN.

The RSS used the high-gain antenna and the spacecraft's communications system to study the physical properties (masses, gravity fields and densities) of the planets and moons; and to determine the amount, size and distribution of material in Saturn's rings. 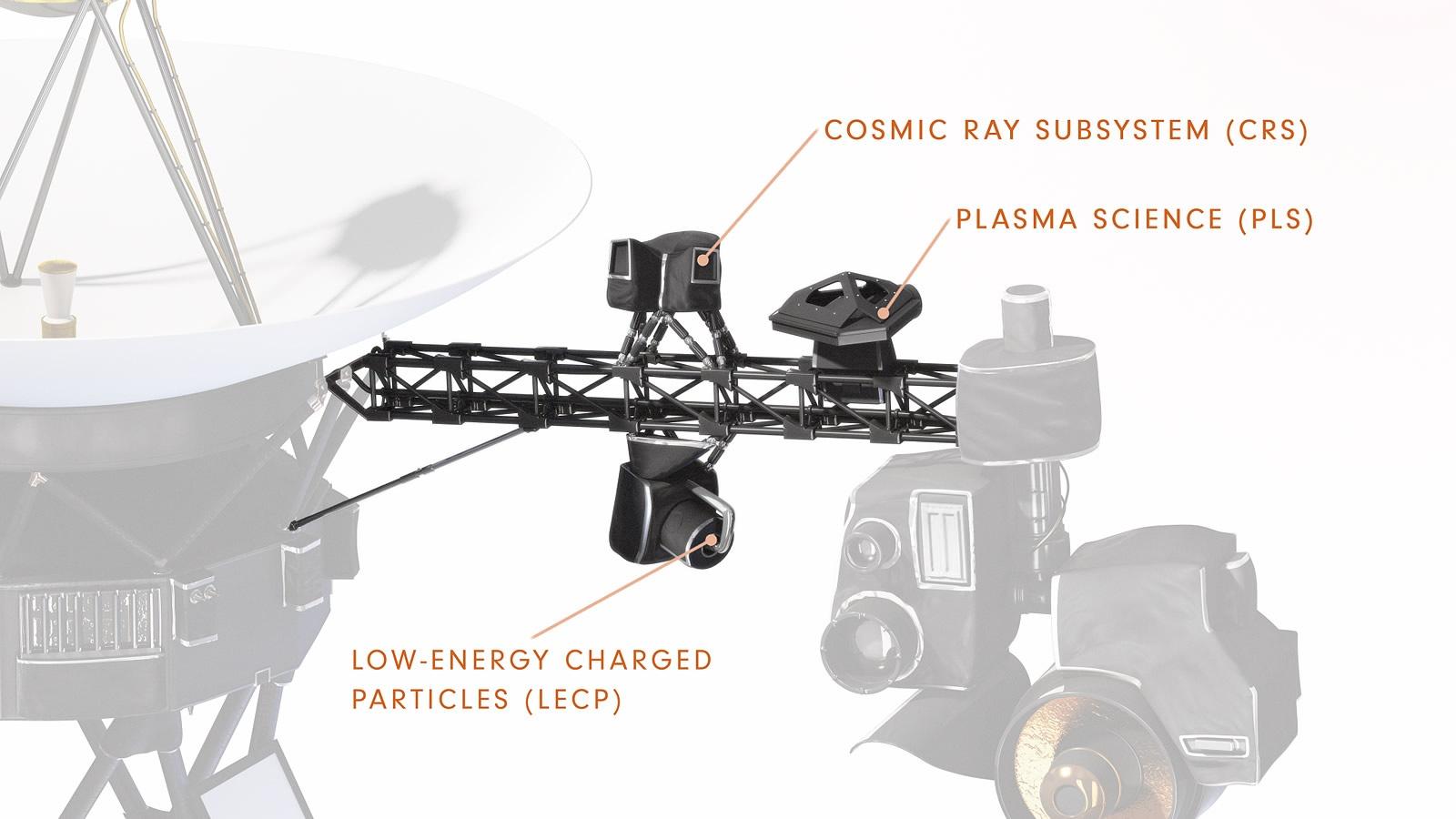 The science boom anchors 3 instruments that are dedicated to studying particles in space:

The CRS has the highest sensitivity of any of Voyager's sensors, and looks for very high energy particles from the sun and other galactic sources. Currently, it is detecting the prevalence of particles that dominate within the bubble of our sun's influence and those that dominate outside of it, in interstellar space. These readings helped scientists determine when Voyager 1 entered interstellar space, and should do the same for Voyager 2 when it crosses over sometime in the next few years.

The PLS looks for the lowest-energy particles in plasma, and can also look for particles moving at particular speeds, and, to some extent, the direction from which they came. It was used to study the solar wind and its interaction with the planets and their moons; and on Voyager 2, should help detect and study the boundary between our solar system and interstellar space.

The LECP has the broadest energy range of the three sets of particle sensors. Like a target at a shooting range, it measures how many particles hit it, and determines the speed of those particles by how far into the target they penetrate. It's used to study cosmic radiation, and particles that emanate from the sun, the planets, and interstellar space. 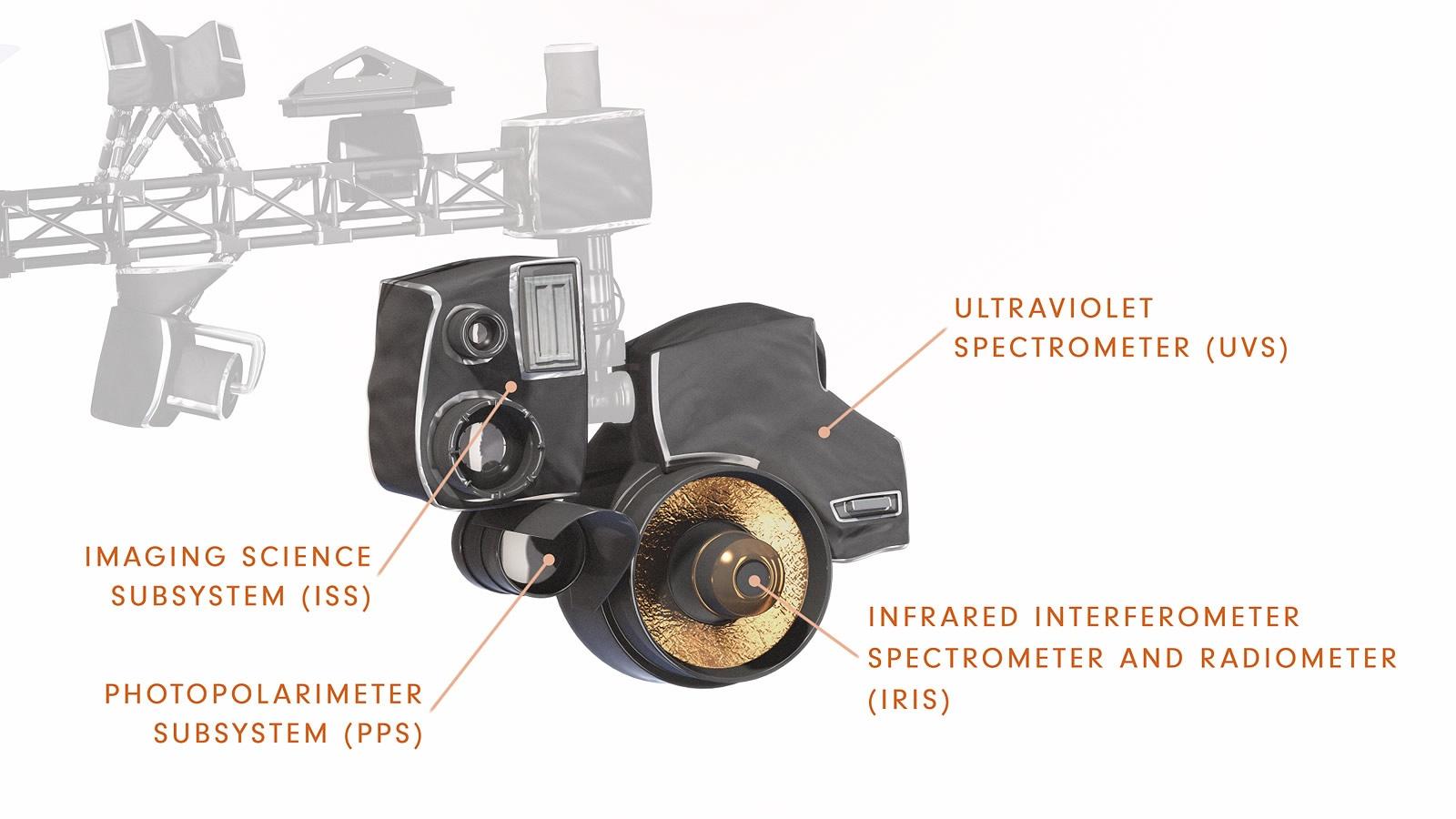 At the end of the science boom is the moveable scan platform that houses 5 optical sensing instruments, including the two cameras:

The ISS consists of two black and white television-type cameras. One has a low resolution 200 mm wide-angle lens, and the other has a higher resolution 1500 mm narrow-angle lens—sharp enough to read a newspaper headline at a distance of .62 miles. In front of each camera is a rotating filter wheel containing eight different filters. By combining images taken with different filters, the imaging scientists can create accurate visual color photos from the black and white camera.

The PPS used a small telescope and polarizing filters to study particles in the atmospheres of the outer planets (and on the surfaces of some of their moons) by measuring the way light gets scattered as it hits the particles. The instrument was also used to search for optical evidence of lightning and auroras.

The IRIS acts as three separate instruments. It generated temperature profiles of the outer planets (and moons with atmospheres); studied what types of elements or compounds were present in their atmospheres and on the surfaces; and measured—using ultraviolet, visible, and infrared frequencies—the amount of sunlight they reflected.

The UVS is a specialized ultraviolet light meter. It identifies particles present in planetary atmospheres by studying atomic absorption—how different elements and compounds absorb or reflect different wavelengths of light. 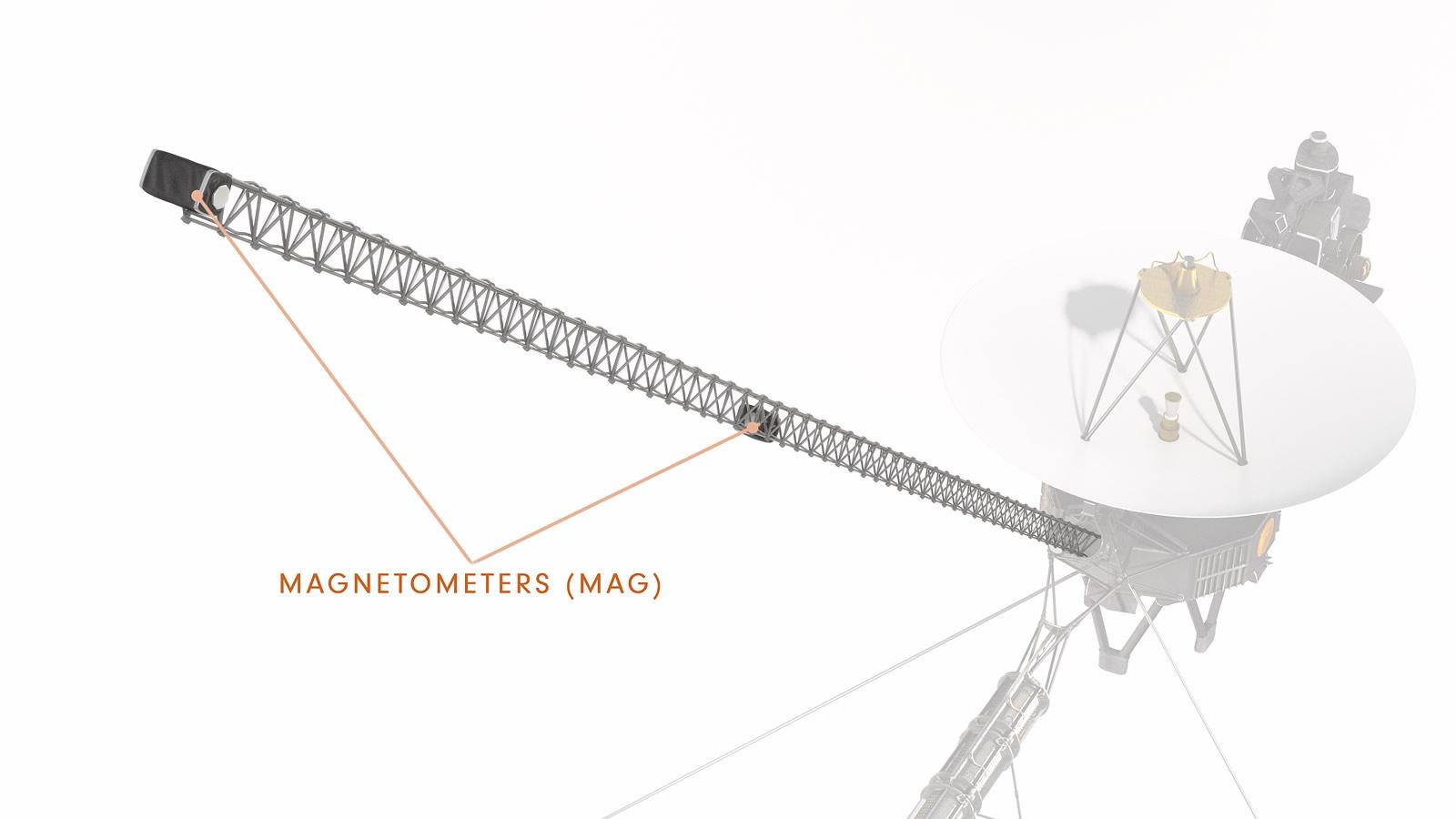 On the opposite side of the spacecraft from the science boom is a 43-foot fiberglass boom that houses Voyager's Magnetometer instruments. Its length ensures that the spacecraft's electronics don't interfere with the instrument's magnetic readings. 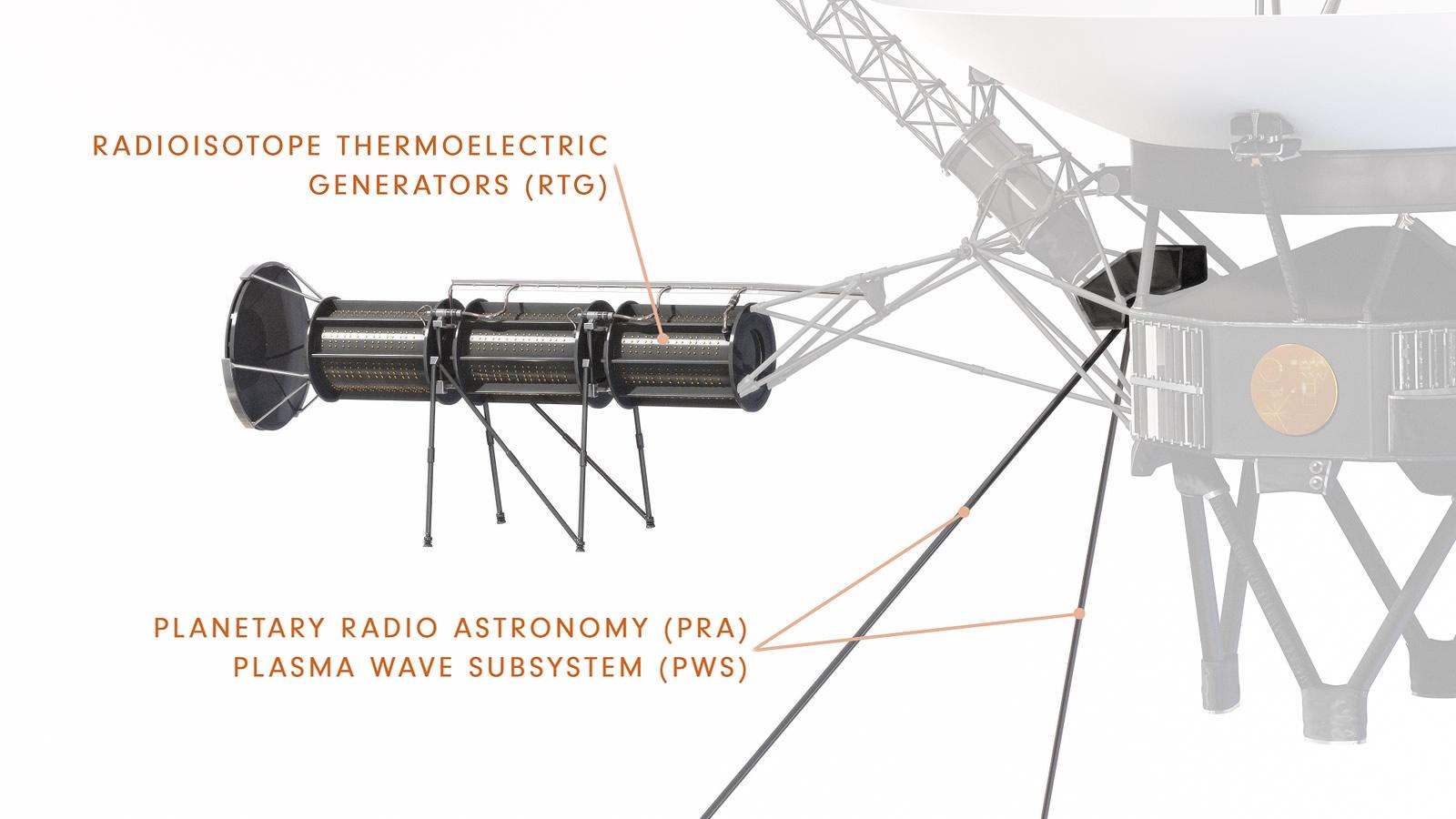 Below the MAG boom, a smaller boom holds the radioactive power source away from the ship's electronics and the other scientific instruments. Below that, two 32-foot radio antenna jut out from the central bus like rabbit ears.

The power source for the spacecraft is three RTGs that turn the heat given off by radioactive plutonium-238 into electricity. When Voyager launched, the RTGs produced 400 watts of energy but their output decreases over time due to natural radioactive decay. The current rate of loss is about 4 watts per year. By managing power carefully, the Voyager team hopes to keep both spacecraft functioning through 2027, the 50th anniversary of their launch.

The PRA used the two antennas to measure radio waves emitted by Jupiter, Saturn, Uranus and Neptune, revealing details about the physics of magnetospheric plasma resonances. The PWS used the same antennas to measure the electrical field components of plasma waves at the outer planets and provided basic information about wave-particle interactions. Now, the instrument is providing information about the changes to the plasma waves as they approach and enter interstellar space.