Providing Information
Hoping to save others from the sexual turmoil that had plagued his childhood, Kinsey argued for a different brand of sex education, one that would head off the guilt so often spawned by the Victorian system. He believed that parents should take the lead in providing their young with information about sex, and he and his wife Clara began educating their own children at an early age. Furthermore, he insisted that sex education should go beyond biology and seek to instill in children healthy attitudes about sex. As with everything he interested himself in, Kinsey tore into sex education with missionary fervor. Alfred and Clara started advising students at Indiana University informally about sex, having undergraduates over to their house for tea and sex talk. They even lent their car to at least one secretly married couple so that they could enjoy a little privacy away from the dormitories, and eventually neighborhood parents were consulting the Kinseys about what to tell their own children.

Putting Sex Education Into the Curriculum
In 1938, prompted by concern about sexually transmitted diseases, the Indiana University Daily Student published an editorial demanding free syphilis testing for all students, and others rapidly escalated the demand to include formal sex education as well. Kinsey saw an opening. While other faculty members were debating amongst themselves whether sex education for students was a good idea, Kinsey petitioned Herman Wells, Indiana University's progressive president, for permission to offer a noncredit "marriage course." Wells and the university's board of trustees gave Kinsey's plan their blessing, but stipulated that the course be open only to seniors and married students, and that there be no advance publicity. Kinsey formed a faculty committee to plan the course; true to form, he quickly steamrolled the other committee members into doing everything his way, and cast aside the trustees' admonitions about entrance requirements and publicity. By the first lecture that spring, 98 people had enrolled in the class: 70 women and 28 men.

Instantly Popular Course
The marriage course consisted of 12 lectures, of which Kinsey taught four. In the first lecture, "The Biological Basis of Society," Kinsey argued that sex was the glue that held human societies together. He attacked the self-appointed role of religious institutions in regulating sexual conduct, and deplored youths' almost total ignorance of sex as the inevitable result of Victorian morals and mores. Kinsey's other three lectures covered "Reproductive Anatomy and Physiology," contraception, and individual variation, both physical and behavioral. Kinsey was nothing if not candid, discussing the most intimate details of sexual behavior without embarrassment or euphemisms, and showing graphic slides with drawings depicting the details of sexual intercourse. But while he cloaked the course in the mantle of science, he structured it as a powerful piece of advocacy, arguing strongly for the sexual liberation of males and females alike. Needless to say students loved the course, and Kinsey and his team repeated it in the fall semester, expanded to sixteen lectures and some 200 students.

From Teaching to Research
Along with the course, Kinsey offered individual counseling sessions in which he offered to answer students' questions and advise them on issues related to sex. As he had planned from the beginning, he used these sessions to collect data about students' sex lives, launching his nascent career as a sexologist. By 1940, however, Kinsey had made plenty of enemies on the faculty. Some were personally affronted by his dictatorial management style, some were offended by the course's content, and others simply felt jealous at its success. Accusing him of exploiting students for his own research, they petitioned President Wells to remove Kinsey from the marriage course. Bowing to the pressure, Wells gave Kinsey an ultimatum: He could keep his research or the class, but not both. Kinsey chose the research.

Kinsey Establishes the Institute for Sex Research
The Institute for Sex Research was incorporated in 1947, only a year before Sexual Behavior in the Human Male appeared in bookstores, but Alfred Kinsey's sex research had begun two decades earlier, during entomological expeditions with favored graduate students. Out in the wild, his former students recalled, after a grueling day traipsing through the woods in search of gall wasps, Kinsey would somehow always twist the campfire talk to sex, talking about his relationship with his wife, Clara, and asking them about their own sex lives. By the mid-1930s, Kinsey was making it known that any Indiana University student who had questions about sex could come to see him, but he formally inaugurated his research with the debut of the marriage course in 1938. Starting that fall, he began asking students in the course to complete a questionnaire on their sexual histories, and by the end of the semester he had collected sixty-two surveys.

Personal Questions, Confidential Answers
After 1938 Kinsey switched from the questionnaire to interviews, believing that he could obtain more truthful and complete answers one-on-one than in a written survey. In its most refined form, the interview lasted several hours and consisted of between 300 and 521 questions, with the exact course of the interview and the number of questions determined by the subject's answers. To persuade people to share their deepest secrets with him, Kinsey promised his volunteers total confidentiality, even enlisting the services of a cryptographer to help him develop a code for recording the results of each interview that would preserve the subject's anonymity and the secrecy of his or her replies. This code was known only to Kinsey and his assistants, and it was never written down. 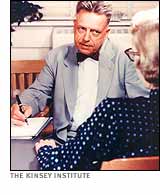 Kinsey's fascination with sex extended beyond monogamous, heterosexual intercourse. Seeking to probe every facet of human sexual experience, he began diversifying his sample, including first prison inmates -- drifters, imprisoned homosexuals, and hardened criminals alike -- and then homosexuals in the gay bars on Chicago's Rush Street. By all accounts, Kinsey's trips to Chicago influenced him deeply, for it was there that his own sexual attraction to men began to bubble to the surface. Faced with such temptation, Kinsey did not stop at gathering volunteers' sexual histories, but, at least for a short time, had sex with men he met.

Vast Ambitions
Enthralled by the incredible diversity of behavior he was discovering, which soon confirmed his hunch that natural variation applied as much to human sexual behavior as to gall wasp morphology, Kinsey began to envision a mammoth nine-volume series thoroughly documenting American sexuality. He would start with males and females, then go on to African Americans, sex offenders, homosexuals, prison inmates, prostitutes, and such topics as marriage and sex education. Kinsey decided that to realize such an ambitious undertaking he would have to take tens -- or even hundreds -- of thousands of interviews, of people from all walks of life, and for that he would need money.

A Small Grant
In December 1940, Kinsey submitted an application for a research grant to the National Research Council's Committee for Research in Problems of Sex (C.R.P.S.); the following year, C.R.P.S. awarded him $1,600. While not nearly enough money for the whole project, this small award was the beginning of a fruitful and stormy relationship with C.R.P.S. and its principal benefactor, the Rockefeller Foundation, which would last for more than a decade and fund Kinsey's research throughout most of that time. Key to this relationship were Robert M. Yerkes and George W. Corner, Kinsey's staunch supporters at C.R.P.S., and Alan Gregg, the Rockefeller's medical director.

Building a Team
With his first grant under his belt, and more to come, Kinsey set out to recruit research assistants, people he could train to conduct interviews and trust not to betray confidences. In addition, because of they material they would be handling, they could not be sex-shy: "We can not use," Kinsey wrote, "anyone who is afraid of sex." First came Clyde Martin, an Indiana University undergraduate who started as Kinsey's assistant in 1941; Wardell Pomeroy, a prison psychologist with the state of Indiana, joined the staff in 1943; and Paul Gebhard, a Harvard-trained anthropologist, began in 1946. As each of these men joined his staff, Kinsey made him memorize the entire interview, in all of its possible permutations, as well as the code for recording the results. Then they would hit the road, traveling from city to city giving lectures and conducting as many as 300 interviews per week. Even in its earliest years, the project generated so much data that Kinsey turned to punch cards and mechanical tabulating machines, the forerunners of today's computers, to keep track of the results.

The Institute for Sex Research opened its doors in 1947, a private, nonprofit organization located on the second floor of Indiana University's Biology Hall, a few steps from the office Kinsey had occupied since his arrival in Bloomington in 1920. There, within its narrow confines, were housed thousands of interview records and the other fruits of his many field trips. By 1948, no longer satisfied with merely collecting other people's histories, Kinsey started encouraging his research staff to experiment sexually with each other. A series of liaisons followed among Kinsey, his staff, their wives, and invited guests. In 1949, he hired William Dellenback to film and photograph these people engaged in masturbation or intercourse. He collected a library of diverse items of erotica from around the world. He imported what he could not find at home, eventually attracting the attention of the U.S. Customs Service and sparking a lawsuit that remained unsettled when he died in 1956, leaving a legacy of controversy and an undeniable impact on American society.

Ongoing Research
The institute survived the lawsuit, the publication of Kinsey's two books about male and female sexual behavior, accusations of Communist activities, and the subsequent loss of its funding -- and exists today as the Kinsey Institute for Research in Sex, Gender, and Reproduction.