Events Leading to the American Revolution

In the 1760s and 1770s, Britain levied taxes and duties on her American colonies that were met with increasing disdain and violence. In Boston, when officials came to regulate documents under the Stamp Act, masked men intimidated them until they fled. In response to surcharges on imports such as glass, paint, and tea, the colonists refused to buy these products. Some Bostonians taunted and threw rocks at the British soldiers who occupied the town to keep order. On March 5, 1770, the Brits finally fought back -- with their muskets. Five Americans were killed in what became known as the Boston Massacre.

No Taxation...
Eventually the British loosened their hold slightly, the soldiers were quartered away from Boston and the taxes were repealed, except for a tax on tea. Again some Americans responded violently and theatrically. On December 16, 1773, a group of men dressed as Indians dumped the tea into the harbor. Among the known participants were Paul Revere and Joseph Warren.

British Response
When news of the Boston Tea Party reached England, British general Thomas Gage was on leave from his North American post. For years he had complained about the Americans, saying "America is a mere bully, from one end to the other, and the Bostonians by far the greatest bullies." The latest incident seemed to prove Gage right. After he met with King George, many of Gage's recommendations for controlling the colonies were put into place. Gage returned to Massachusetts the next summer as the colony's governor, to implement the reforms himself.

American Resistance
The Coercive Acts (known to the Americans as the Intolerable Acts) included a ban on town meetings, judges appointed by the governor and the closing of Boston's port. In response, colonists met as usual (with the doors locked to keep soldiers out), juries refused to sit for Tory judges, and patriot leaders John Hancock and Samuel Adams fled the city.

The Right to Bear Arms
To reduce the potential military threat to his troops, Gage began to disarm colonists, seizing their ammunition. The march on Concord was not the first such mission. In September 1774, the General had sent 260 men to capture the supply of gunpowder at the Powder House on Quarry Hill (now in the town of Somerville). Starting out before dawn, the British regulars took possession of 250 half-barrels, bringing them back to Boston before noon. Following angry protests in the countryside, Gage made steps to secure Boston from the American mobs. 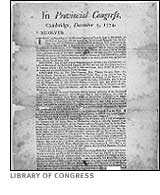 The furious colonists, for their part, resolved not to be surprised again. Hancock and Adams, who controlled the Boston committee of correspondence that communicated with other colonies to coordinate resistance efforts, became leaders of a new Provincial Congress, an unofficial government run by Americans. The Provincial Congress established a Committee of Safety to protect military supplies, and Paul Revere and others set up spy networks and signals. When Gage ordered his men to seize more munitions at Portsmouth, New Hampshire, and Salem, Massachusetts, in the following months, Revere or one of his allies managed to warn the locals so they could hide the ordnance in advance of the raid.

The Stage Was Set
The British governor had an agenda to disarm; many Massachusetts colonists were spoiling to fight for their right to bear arms. The stage was set for the first battles of the American Revolution.