The prestigious awards, established in 1942, “uphold the highest standards in journalism by honoring winners annually, informing the public about those journalists’ contributions and supporting journalism education and innovation,” the announcement said.

Of the 30 finalists announced, PBS led with eight nominations total. FRONTLINE airs nationwide on PBS and is produced at GBH in Boston. The three FRONTLINE programs recognized reflect the breadth of the series’ investigative journalism, offering in-depth reporting on issues impacting the daily lives of the American public:

“It’s an honor to have FRONTLINE’s collaborative reporting recognized by the duPont-Columbia Awards in this way,” says FRONTLINE’s executive producer, Raney Aronson-Rath. “We share this wonderful news with our editorial partners and supporters who are committed to delivering trustworthy accountability journalism to the American public.”

The winners of the 2022 duPont-Columbia Awards will be announced in February 2022. You can read the full list of this year’s finalists here and explore the three FRONTLINE projects recognized below: 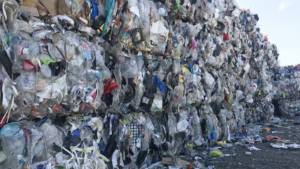 Plastic piles up at Garten Services in Salem, Oregon.

Drawing on reporting from FRONTLINE and NPR’s 2020 documentary, Plastic Wars.