“A Disaster of Good Intentions”

After the devastating earthquake struck Haiti in January 2010, a chorus of experts told us that now was the time to take a new approach as we provide aid to the devastatingly poor island nation.

“This is an opportunity to rethink how aid works and how we, the most powerful country in this part of the world, can work with our oldest neighbor,” Paul Farmer, co-founder of Partners in Health, told FRONTLINE’s Martin Smith. “So I think all that possibility is built into this tragedy.”

So how are we doing?

Not well, according to Rolling Stone‘s Janet Reitman, who writes, “the world’s unprecedented effort to rebuild [Haiti] has turned into a disaster of good intentions.” Her excellent piece delves into the political back story behind U.S. policy in Haiti, and investigates why billions of dollars of post-earthquake aid has yet to be used in productive ways. The result in this “Republic of NGOs” is a convoluted set of not-quite-investment plans that have yet to make a real impact for the Haitian people, many of whom are still living in violent and cholera-plagued slums. 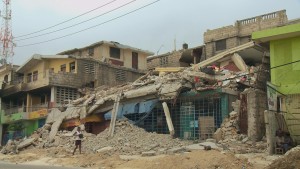