“She Has to Be Counted”: One Woman’s Life and Death in the Bronx

The Herbert T. McCall Funeral Home in the Bronx has been inundated with cases during the coronavirus pandemic. (Anjali Tsui | FRONTLINE)

This story was co-published with THE CITY. Have you lost someone to coronavirus or do you work with victims’ families? THE CITY is collecting stories of New Yorkers felled by COVID-19. Share yours here.

Alpha Crawford started feeling sick at the end of March. She had a fever and pneumonia. As the coronavirus spread in New York, visitors were banned from entering her nursing home in the Bronx.

Doctors there put 97-year-old Crawford on antibiotics, but they didn’t seem to help. A nurse called her goddaughter and next-of-kin, and asked if she wanted to talk on FaceTime.

Armored in a gown and face shield, the nurse entered Crawford’s room and held a phone to her face. On the other end of the call, Madelon Kendricks could see that her godmother was struggling to breathe.

Crawford died on April 4. Kendricks said she didn’t find out until four days later. “She never got tested but she had all the symptoms,” Kendricks said. “They never mentioned the ‘c’ word” — COVID-19. The nursing home didn’t respond to requests for comment. Official records say that she died from pulmonary obstructive disease, and pneumonia in both lungs.

Shortly after Crawford passed away, COVID-19 deaths reached a peak in New York City, with 799 people dying in a single day.

The Bronx has been hit unusually hard by the outbreak, with more COVID-19 cases per capita than any other borough in New York City. Residents there, the majority of whom are black or Latino, are dying at twice the rate of other New Yorkers.

The borough is home to the poorest congressional district in the U.S., where residents suffer from high rates of asthma, diabetes and hypertension — conditions that worsen outcomes for COVID-19 patients.

The story of Alpha Crawford’s life — and her goddaughter’s effort to preserve her dignity after death — highlights the extent of the disproportionate toll the disease has taken on this community.

Alpha Crawford, 97, died in a nursing home in the Bronx at the height of the coronavirus outbreak in New York City. She had campaigned for daycare access for low-income New Yorkers. (Courtesy of Madelon Kendricks)

For weeks after Crawford’s death, Kendricks scrambled to find a way to put her godmother to rest. After being turned away by several funeral homes that were too full to take on new cases, Kendricks returned to Herbert T. McCall, a funeral home in the South Bronx. McCall is where, in 1991, she held services for her mother, Dorothy Thomas, who was Crawford’s best friend. It’s also where she mourned her father and grandfather.

Sheila Newkirk, the funeral director, warned Kendricks that crematoriums in the city were backed up. She might have to wait several weeks for her godmother to be cremated, and the small, family-run funeral home didn’t have the capacity to store bodies for that long.

Kendricks faced a dilemma: The nursing home set limits on how long they could hold the body. So Crawford was transferred to the medical examiner’s office, which could only keep her for another 15 days.

As the deadline approached, the medical examiner’s office called Kendricks and offered to bury Crawford in a temporary grave. The thought was horrifying.

“People need to be treated in death the same way that they are treated in life,” Kendricks said. “People are just being discarded. I’m wondering, is it only the poor? Or are the rich too going down like this?”

Crawford was born in a South Carolina town called Little Africa in 1922. Her parents were sharecroppers, according to Kendricks, and the young Crawford worked alongside them. After graduating from a segregated high school in Rutherfordton, North Carolina, she attended Winston-Salem State University.

But there were few opportunities for a young black woman with a bachelor’s degree at home. In the 1950s, she moved to the Bronx, joining the waves of African Americans fleeing the violence and discrimination of an oppressive regime in the Jim Crow South.

There, Crawford ran a daycare and became a community activist, rallying for access to child care for low-income families. She fought for funding to turn an empty lot into a community playground. In 1988, then-New York City Mayor Ed Koch dedicated the park in her name: the Alpha Crawford Sunshine Park.

Crawford was also a member of the local Mount Carmel Baptist Church for about as long as it had been around — for more than 60 years. But in recent years, her health had kept her from attending regular services. In 2018, she returned to the church on Mother’s Day with her goddaughter. “When she came in there, you would have thought the queen walked through that door,” Kendricks said. “They went nuts. They were so happy to see her.”

Kendricks said Crawford wouldn’t have wanted a solemn funeral. She would have wanted a spirited memorial service in her church, packed with friends, family and a full choir. But none of that can happen now.

Two weeks after Crawford died, Kendricks, who works as a psychotherapist, was watching Rachel Maddow on MSNBC when she saw a familiar name appear on screen: The Plaza Rehabilitation and Nursing Center — where her godmother had lived. Thirty-five residents had died there, according to the New York State Health Department.

Since then, the Plaza has emerged as the nursing home with the highest death toll in the Bronx. According to new data released by the state, 60 residents have died — including 11 confirmed COVID-19 cases.

Because Crawford was never tested, Kendricks is not sure if she is counted among those who presumably died from the coronavirus.

This week, Kendricks drove down from her home in Yonkers to the McCall funeral home to check on her godmother’s arrangements. She put on a black fabric mask and stood by the threshold of the funeral director’s office, trying to maintain a distance.

“Hi, I’m here to find out what happened with Alpha Crawford,” she said.

“She was cremated, but her cremains aren’t back yet,” Newkirk said.

Crawford had been taken to Pennsylvania to be cremated. “New York is so backed up,” Newkirk said. “We sent some people to Pennsylvania so they wouldn’t be held for so long.”

Kendricks was shocked. Crawford had already been held for five weeks while waiting to be cremated in the Bronx. “It’s a whole bunch of mixup,” she said. “I’m not even sure that people are going to know what body went where after this is over.”

She doesn’t blame the funeral home. She is grateful that they found a solution and spared her godmother from being buried in the city’s potter’s field on Hart Island. But there’s no sense of closure: She never got to say goodbye. She will feel better when her Crawford’s ashes are finally transported back to New York and buried next to her husband, a Korean War veteran, at Calverton National Cemetery on Long Island.

Kendrick also wants to ensure that Crawford is included in the coronavirus death toll. “ There are so many people who are uncounted in this horror,” she said. “She has to be counted.” 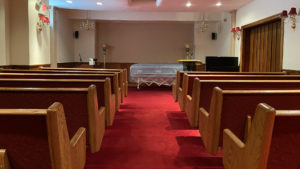