America’s Partisan Divide Grew Wider Than Ever in 2017

A demonstrator walks with an upside down flag during a 2014 protest in Ferguson, Mo. (AP Photo/Charlie Riedel)

The partisan divide on some of the nation’s most pressing political issues, including environmental protection, race and immigration, has widened even further under President Donald Trump, according to a new report from the Pew Research Center.

America’s political divide had already reached record levels during the Obama presidency, but according to Pew, the partisan split between Democrats and Republicans is now the widest its been in more than two decades.

Based on surveys conducted this summer of more than 5,000 adults, the study revealed an increased gap between Republicans and Democrats on 10 questions about “political values” that Pew has asked since 1994. On average, there is now a 36 percentage point difference between the two parties, substantially greater than the 15 percentage point difference first measured in 1994.

This growth was seen sharply on the topic of race. Today, 41 percent of respondents said racial discrimination is the main reason why black people cannot get ahead in life, while 49 percent said that African-Americans who can’t get ahead are mostly responsible for their own situation.

Over the years, this question has revealed an increased gap across party lines. In 1994, the partisan difference was 13 points. In 2009, it was 19 points. Today, the gap has increased to 50 points.

Views on immigration are the most positive that they have been over the last two decades, according to Pew. Almost two-thirds of the public said that immigrants strengthen the country “because of their hard work and talents” while 26 percent said that immigrants are a burden “because they take our jobs, housing and health care.” 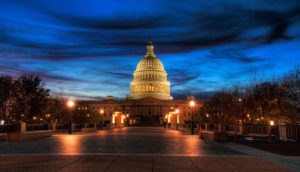