An Alarming Tip About a Neo-Nazi Marine, Then An Uncertain Response

White supremacists at a “White Lives Matter” rally in Shelbyville, Tenn., on Oct. 28, 2017. Pistolis identified himself in an online chat as the man holding the black shield. (Shay Horse/NurPhoto via Getty Images)

For weeks, Beck had been tracking the online life of a 21-year-old lance corporal in the U.S. Marine Corps. He said he had concluded the young man, a North Carolina native named Vasillios Pistolis, was deeply involved in neo-Nazi and white supremacist activities.

Beck said he had compiled an exhaustive dossier on the young Marine, tracing the evolution of Pistolis’ racist worldview over recent years and linking him to violent altercations at the bloody white power rally in Charlottesville, Virginia, last August. The most recent piece of evidence, Beck said, was a fresh video that appeared to show Pistolis standing alongside a leader of the Traditionalist Worker Party, a fascist group, during a confrontation with an interracial couple at a restaurant in a suburb of Nashville, Tennessee.

Beck was well positioned both to be offended by Pistolis’ alleged conduct and to report it: Beck had served in the Marines from 2002 through 2006, including a tour in Iraq. In fact, he’d been assigned to the 2nd Marine Logistics Unit, the same unit in which Pistolis was serving.

Beck said he contacted the authorities at the unit’s headquarters, Camp Lejeune, a large Marine Installation on the North Carolina coast, and spoke briefly with an investigator for the post’s military police.

“I told them what I had seen him do, the evidence I had,” recalled Beck.

Beck said he offered to share his dossier with Marine detectives, but they didn’t take him up on the offer.

After the phone conversation, he said, “I never heard a thing.”

Beck’s phone bill, which he provided to ProPublica and FRONTLINE, shows that he spoke multiple times with personnel at Camp Lejeune on Oct. 29. The records indicate that he received a brief six-minute call from military police at 9:24 that night.

More than six months later, Pistolis is still serving in the Marines.

At this juncture, it’s unclear precisely what steps if any the Marines took after Beck alerted them to Pistolis. What is certain is that in May, after ProPublica and FRONTLINE featured Pistolis in a joint report about his violent involvement in the white power movement, the Marines said they were investigating Pistolis.

One military official indicated that police at Camp Lejeune and detectives with the Naval Criminal Investigative Service, the unit that handles felony-level offenses in the Navy and Marines, had been diligently investigating Pistolis since receiving the information about him from Beck. Another person with knowledge of the matter, an officer with the Marine Corps, indicated that Pistolis had been questioned by NCIS, but that detectives found no connection to any organized groups or evidence that he posed a threat.

In the end, NCIS acknowledged that Pistolis is today the subject of a criminal probe, but added little detail.

“We do not discuss ongoing investigations,” said Adam Stump, an NCIS spokesman. “Regarding the service member you have asked about, the investigation is still ongoing. We cannot discuss further.”

A spokesman for Pistolis’ unit, Samir Glenn-Roundtree, said, “Marines accused of activity counter to our standards and core values are entitled to a thorough and impartial review. We have no further information to provide as the investigation is still ongoing.”

ProPublica and FRONTLINE’s reporting on Pistolis made clear the Marine has spent years in the white power movement, including a stint as a cell leader for the Atomwaffen Division, an armed white supremacist group that espouses political terrorism and the overthrow of the U.S. government. In confidential chats, Pistolis, who received expert rifleman certification during his basic training in 2016 and currently works as a water support technician, claimed to have assaulted four people at last summer’s rally in Charlottesville.

“Today cracked 3 skulls open with virtually no damage to myself,” Pistolis wrote on Aug. 12, 2017.

The young man’s double life came as a shock to U.S. Rep. Keith Ellison, a Minnesota Democrat, who shortly after the ProPublica and FRONTLINE report asked the Pentagon to explain what it was doing to keep neo-Nazis out of the armed forces.

Marine Corps regulations forbid the “participation in supremacist or extremist organizations or activities” and violations can lead to a court martial or an ouster from the service. The Department of Defense has also issued rules barring all service members from joining white supremacist rallies or demonstrations.

In interviews last month with ProPublica and FRONTLINE, Pistolis asked the news organizations not to publicize his involvement in the neo-Nazi movement. He denied being in Charlottesville, and said he had not been a member of Atomwaffen, but instead had infiltrated on behalf of another neo-Nazi group. He said he had come under suspicion by NCIS months ago, but believed that investigators had backed off.

As for Beck, his interest in Pistolis started last August when a friend pointed him to a comment Pistolis had made on Facebook. In it, Pistolis seemed to glorify one of the men who had attended the Unite the Right rally in Charlottesville, the biggest white power event in a generation.

Beck said he began scrolling through Pistolis’ social media channels and quickly realized that Pistolis was an active-duty Marine — and that he was fairly open about his love of Nazism. Beck, who now works at a New York nonprofit organization, became alarmed. He said he feared that Pistolis “could be radicalizing people around him” in the Marine Corps, or that he might be part of a larger network of white supremacists within the service. Through his research he said he began to worry that Pistolis “might get more violent” unless someone intervened.

In one Facebook post identified by Beck, Pistolis encouraged people to watch a revisionist documentary called “The Greatest Story Never Told,” which praises Hitler. “This should be watched by all,” he enthused. In other posts, Beck says he uncovered Pistolis praised the Golden Dawn, a Greek fascist organization, derided gays and lesbians, and uploaded a snapshot of his AK-47-style assault rifle.

Pistolis used the handle Vasillios88 on Instagram and was known as billythegreek88 on Snapchat; 88 is a widely-used white supremacist code meaning “Heil Hitler.”

Beck was shocked that the young Marine would be so public with his views. “It was stunning. It was absolutely astonishing,” he recalled.

Beck had no contact with ProPublica or FRONTLINE prior to our report in May. He later reached out to the news organizations to alert them to the action he said he’d taken last fall.

For Beck, Pistolis seemed both an embarrassment and a threat. Pistolis had been a member of Junior ROTC throughout high school before enlisting in the service. As Beck put it in his dossier, Pistolis’ online self-revelations showed him to be “a hateful and well-armed boy, then man, reveling in white supremacy, white nationalism, and outright Nazism for years.”

Combing through photos and shaky phone-camera video of the Charlottesville melees, Beck found Pistolis popping up over and over. There were shots of Pistolis carrying a custom-made flag featuring the Sonnenrad, a circular Nazi emblem, blended together with the Confederate battle banner. There were images of him swinging the wooden flagpole at people, and others of him holding a torch during a nighttime melee with counter-protesters at the University of Virginia.

Beck’s findings support some of the reporting by ProPublica and FRONTLINE, which placed Pistolis in the center of several altercations in Charlottesville. Through interviews, photos, and confidential chat logs, the news organizations concluded that Pistolis had been a leader in the Atomwaffen Division at the time of the rally and had traveled to Virginia intent on violence. In private online discussions, he boasted repeatedly about attacking Emily Gorcenski, a Charlottesville local who came out to demonstrate against the white supremacists.

Pistolis is at least the third Marine to face discipline in recent months for involvement with racial extremist groups.

Last year, two Marines were arrested by local police after they climbed a building in Graham, North Carolina, and unfurled a banner with a white power slogan and a symbol associated with European extremist movements. The banner drop came during a demonstration in support of Confederate monuments. Both Marines have since been “administratively separated” from the service. One of the men, Staff Sgt. Joseph Manning, was also stationed at Camp Lejeune, while the other, Sgt. Michael Chesny, was based nearby at Cherry Point Air Station.

At the Southern Poverty Law Center, Heidi Beirich has been monitoring the overlap between the military and the white power movement for more than a decade. Beirich said she is concerned by the recent reports on Pistolis and his fellow Marines — and noted that Camp Lejeune has had problems with racial extremists in the past, including a lance corporal who was sentenced to 100 months in federal prison in 2010 for threatening the life of then-President Barack Obama and for committing an armed robbery.

Beirich said she was disturbed that the Marine Corps hadn’t acted more swiftly to expel Pistolis and wondered how aggressively the military was dealing with the broader issue of white supremacist infiltration.

“I wish I could get a clear take on the enforcement,” said Beirich, director of the center’s Intelligence Project. “It’s one thing to have a regulation on the books, it’s another thing to actually enforce it.”

Update Aug 2, 2018: In June, Pistolis was convicted at a court martial on charges of disobeying orders and making false statements. On Aug. 1, Major Brian Block of the U.S. Marine Corps said that Lance Corporal Vasillios Pistolis has “officially been separated from the Marine Corps.”

Have you encountered white supremacists or neo-Nazis in the military? Contact ProPublica.

This story is part of an ongoing collaboration between ProPublica and FRONTLINE that includes documentaries scheduled to begin on PBS in August 2018.

If you’ve witnessed or experienced hate crimes, harassment or incidents of bias, you can use this form to send information to FRONTLINE, ProPublica and other partners in the Documenting Hate project. 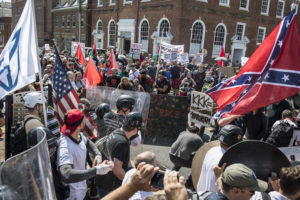 Sick With COVID, She Gave Birth on a Ventilator. This Teacher Took Her Newborn In.