by
Azmat Khan
Watch The Spill, a joint investigation by FRONTLINE and ProPublica into the trail of problems — deadly accidents, disastrous spills, safety violations — which long troubled the oil giant. Could the disaster in the Gulf of Mexico have been prevented?

Update Jan. 29, 2013: BP pleaded guilty to 14 criminal counts today for its role in the 2010 Deepwater Horizon spill, and was sentenced to pay $4 billion in fines and penalties and five years probation. By order of the court, approximated $2.4 billion dollars of that amount will directly benefit the Gulf region and $350 million will fund oil spill prevention and response efforts. Attorney General Eric Holder announced that the criminal resolution is the largest in U.S. history. In December, a separate court finalized an additional $525 million settlement with the Securities and Exchange Commission.

Oil giant BP announced today that it will pay $4.5 billion to settle charges for the April 2010 explosion at its Deepwater Horizon rig that killed 11 workers and unleashed more than 5 million barrels of oil into the Gulf of Mexico.

The settlement, subject to federal court approval, is the largest in history, topping a 2009 $1.2 billion fine on drug maker Pfizer for fraudulent marketing.

Under its criminal settlement with the Justice Department, BP will pay $4 billion over five years, and will pay an addition $525 million over three years to settle claims with the Securities and Exchange Commission.

“All of us at BP deeply regret the tragic loss of life caused by the Deepwater Horizon accident as well as the impact of the spill on the Gulf coast region,” BP’s Group Chief Executive Bob Dudley said in a statement. “We apologize for our role in the accident, and as today’s resolution with the U.S. government further reflects, we have accepted responsibility for our actions.”

In April the oil giant reached a reported $7.8 billion settlement with private claimants. It still faces civil claims that could cost it billions more, but has said it is “prepared to vigorously defend itself ” against them.

“Do We Need a “Death Penalty” for Negligent Oil Companies?” – Deepwater drilling is back to pre-Gulf spill levels. But are we safer if another disaster occurred today? To find out, FRONTLINE spoke with Amy Myers Jaffe, the director of the Baker Institute’s Energy Forum.

“BP’s Troubled Past” – Explore FRONTLINE and ProPublica’s investigative reporting and documents — some never before published — on major incidents at BP facilities over the past decade that grabbed headlines and raised questions about the company’s record and the government’s oversight. 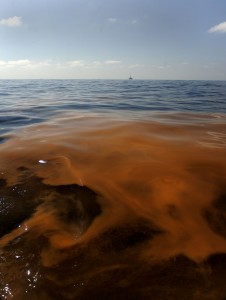