Can Regulators Keep Up with the Supplements Industry?

Walk down the aisles at your local supermarket or drug store and you can find a veritable alphabet soup of health supplements — from acai to zinc — touting various health benefits.

The supplements industry, which includes everything from vitamins and herbal supplements to weight loss pills, has grown into a more than $30 billion industry.

However, the industry has come under scrutiny in recent years for many of the wrong reasons — allegedly mislabeling their products, not testing them for safety, making unproven health claims and in some instances selling products contaminated with potentially harmful unlisted ingredients. A string of high-profile cases linking certain products to serious health issues — some even leading to liver problems and deaths — has raised questions about how well the industry is regulated.

Unlike prescription drugs that have to go through rounds of rigorous testing and clinical trials before they reach your pharmacy, the current system leaves it up to the manufacturers of supplements to make sure they adhere to guidelines established by the Food and Drug Administration.

It’s a distinction that regulators are concerned consumers may not know about.

“I do think it’s very a important thing to be able to point out to the customer that there is essentially no pre-market review that’s done at the FDA before these products go on the market,” said the agency’s acting commissioner, Dr. Stephen Ostroff, in an interview for the FRONTLINE documentary Supplements and Safety.

In other words, the makers of supplements don’t have to win FDA approval before bringing a product to market, unless it contains a new ingredient that’s never been marketed before. The FDA does oversee labeling, but it usually can’t determine whether a manufacturer is following its guidelines until there’s a problem. Often, the agency only steps in after a product that’s already on the shelves has been misbranded or found to be adulterated.

Once a supplement is on shelves, the FDA relies on inspections of the manufacturer to assess whether the supplement actually contains what it says it does. But as experts point out, the agency only inspects a fraction of companies. Data from the Government Accountability Office, for example, showed that between January and September of 2012, the agency inspected 410 firms – roughly 18 percent of known manufacturers at the time.

“They only inspect a small number of facilities relative to the amount of supplements being sold,” said Laura MacCleery, director of regulatory affairs at the Center for Science in the Public Interest, a consumer advocacy group. “They find significant levels of problems in the few facilities they do inspect.”

When the FDA finds a problem, it can respond in several ways — from issuing warning letters, to pursing civil or criminal charges against a manufacturer. That’s what happened last November when the agency worked with the Department of Justice to bring civil and criminal cases against more than 100 makers and marketers of dietary supplements. The sweep targeted companies across 18 states for allegedly selling products with unlisted ingredients or for making treatment claims that were “unsupported by adequate scientific evidence.”

The FDA also uses so-called “adverse event reports” to monitor whether a supplement might pose a health risk. An “adverse event” might be mild, like a headache or indigestion, or something more serious, resulting in hospitalization, surgical intervention, birth defects or even death. Reports can be sent in from consumers, health care professionals or manufacturers themselves. In fact, in cases of serious adverse reactions, supplement makers are required to submit a report.

One concern with this system, though, is that “adverse events” are either underreported or never reach the FDA. A 2013 GAO report, for example, found that poison control centers received 1,000+ more reports between 2008 and 2010 of incidents potentially linked to supplements than did the FDA.

Even when they reach the FDA, reports often fail to result in any action because the agency says such reports often lack enough information, and because it can be difficult to establish a link between a particular supplement and the health problem. And under current law, the FDA has to show that a supplement poses a “significant or unreasonable risk of illness” in court before it can remove it from the market. To win criminal charges, the government has to prove that there was intentional wrongdoing. But such lawsuits are rare. From 2002 to 2008, for instance, the government only successfully prosecuted 14 cases.

“They have very strong enforcement tools, but to use them is incredibly difficult,” said Josh Sharfstein, associate dean for public health practice and training at the Johns Hopkins Bloomberg School of Public Health.

Another challenge is finding the resources to keep pace with an industry with an estimated 80,000 to 90,000 products on the market, according to Steve Morris, the GAO’s director of natural resources and environment.

“Part of it is just the scope of the industry. It’s really large, and the FDA may not have a good sense in terms of the universe of the industry of all the players out there, and the total number of potential adverse effects,” according to Morris. “The resources are limited to some degree, so they can only do so many inspections.”

The FDA gets some assistance in regulating supplements from the Federal Trade Commission, which can take action when companies are found making false or misleading claims about their products. The FTC’s guidelines for supplement marketers say advertising must be truthful and any claims must be substantiated with adequate evidence. For example, if the marketing for a supplement claims that 90 percent of cardiologists recommend it, the claim should be provable. Supplements also have to contain a disclaimer stating that they aren’t intended to “treat,” “cure,” or “prevent” any disease. The FTC can issue warning letters or fines, force marketers to pull or change misleading ads, and can even take them to court over such claims.

Still, many health officials argue that current regulations fail to go far enough. Morris said the FDA can improve its role by offering more guidance to the industry, getting more information about the scope of the problem, and sharing that information with the public. Others have called for dietary supplement makers to register new products with the FDA, arguing that doing so would make it easier to bring enforcement action against rogue products.

In the meantime, officials on the state level have begun to lean in. In February, New York Attorney General Eric Schneiderman sent letters to four of the nation’s largest retailers — GNC, Target, Walmart and Walgreens — calling on them to stop the sale of store-brand herbal supplements after an investigation by his office allegedly showed that just 21 percent of the products tested contained the ingredients listed on their labels.

In an interview with FRONTLINE, Daniel Fabricant, executive director and CEO of the Natural Products Association, a leading industry trade group, said the industry was “working the attorney general’s office so they understand more about the industry and we understand more of their concerns.” But “consumers are going to continue to take supplements,” he said, “because they derive a benefit.  Over half the country every day takes a supplement safely and effectively.”

GNC would later agree to carry out DNA barcoding to authenticate its products. Days later, 14 state attorneys general wrote a letter to lawmakers in Congress urging an inquiry into the herbal supplements industry, and a stronger oversight role for the FDA.

Experts like Sharfstein say that change needs to occur at the national level, given the potential size of the issue.

“Certainly states have done a good job calling attention to the problem,” Sharfstein said. “They can go after very small parts of the problem, but I don’t think states are going to be able to grapple with the whole problem.”

MacCleery, the consumer advocate, believes change is in the industry’s interests as well. “These are products that are widely consumed by the public who assumes that they are better regulated than they are,” she said. “The dietary supplement industry would be smart to decide what kind of additional safety measures are appropriate, because as a whole they’re getting discredited by bad actors that look for spaces where products are under-regulated in order to operate.” 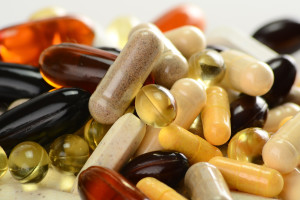