A Wilson football sits on the field at the University of Phoenix Stadium before an NFL game between the Miami Dolphins and the Arizona Cardinals on Sunday, Sept. 30, 2012, in Glendale. The Cardinals won the game, 24-21. (AP Photo/Greg Trott)

Concussions are rarely a “one and done” injury in the NFL, a point that was underscored in Week 14 of the 2013 season. Head injuries sidelined 11 players — four of whom entered the week already having dealt with concussions a combined 19 times before. 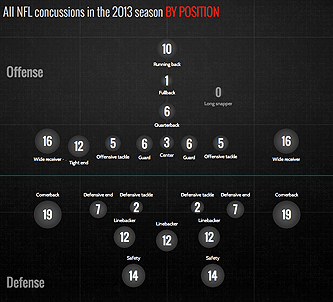 For Chris Prosinski of the Jaguars, the Week 14 concussion was his second since training camp in August. The Broncos’ Wes Welker suffered his second in just three weeks. The Vikings’ John Carlson was knocked out by his fifth head injury since college, while Brandon Stokely of the Ravens went down with the 14th concussion of his football career.

In all, NFL teams have reported 114 concussions this season. (Click on the graphic to the right to explore each one). With less than a month left in the regular season, these are the names that we’re watching for on the next NFL injury report:

The concussion was Carlson’s fifth since college. In 2012, Carlson missed two games because of a concussion he suffered against the Cardinals. A year earlier, he was briefly hospitalized after slamming his head on the frozen turf of Chicago’s Soldiers Field. Carlson later told the West Central Tribune newspaper that he had no recollection of the play.

“It looked like it hurt,” Carlson said. “The first thing I remember after that was being in the ambulance. I was confused at first, but the team doctor was there with me and told me right away where I was and what was going on.”

Carlson reportedly also had two concussions during his college career at Notre Dame.

Antonio Cromartie played 66 out of 69 defensive downs for the Jets in Week 14, but after the game he began to complain of a headache. Shortly after, he was added to the league’s concussion protocol.

It’s not clear when Cromartie was hurt, although he did collide with teammate Ed Reed in the third quarter. Cromartie briefly left the game after the collision, but soon returned.

“He certainly wasn’t forced out there,” said Coach Rex Ryan said. “If anyone would have know about it or whatever, there would have been some concerns.”

The injury marked the second time in 2013 that a Jets player remained on the field after suffering an apparent head injury. As ESPN reported:

Earlier this season, Jets wide receiver Jeremy Kerley suffered a concussion and too stayed in the game. In the opener against the Buccaneers, Kerley’s helmet came off after a hard hit. He passed an in-game and postgame evaluation, but he showed symptoms the next day and was diagnosed with a concussion.

Thomas DeCoud left the Falcons’ Week 14 game with the Packers after he took a blow to the head while trying to tackle Green Bay running back Eddie Lacy.

DeCoud stayed down on the ground before he was helped to his feet and escorted to the locker room. Falcons Coach Mike Smith confirmed the injury, saying DeCoud will “have to go through a number of steps before he’ll be cleared to play.”

Patriots tight end Ron Gronkowski tore multiple ligaments in his knee in Week 14, but according to a report by NBC Sports, he also suffered a slight concussion after his head banged against the turf at Gillette Stadium. The Patriots placed Gronkowski on the injured reserve list because of the knee injury, ending his season and ensuring that his concussion will go uncounted on the league injury report in Week 15.

Gronkowski was hurt on a low hit by Browns safety T.J. Ward, who admitted after the game he was trying to avoid a helmet-to-helmet blow. As Deadspin noted, “Ward was ostensibly trying to protect Gronk and ended up leaving him saddled with the worst injuries possible. The scariest part of all is that T.J. Ward did exactly what the NFL wanted him to do.”

Two Raiders were sidelined by head injuries in Week 14: tight end Nick Kasa and defensive tackle Vance Walker. For the rookie Kasa, the concussion was his second in as many seasons. In 2012, Kasa suffered a concussion while still playing for the University of Colorado. Of the two injuries, though, Raiders Coach Dennis Allen said that Walker’s was more of a “concern.”

Browns running back Willis McGahee suffered a concussion in the fourth quarter of Cleveland’s Week 14 loss to the Patriots, Coach Rob Chudzinski told reporters after the game.

The head injury was at least the second for McGahee since 2009, when he was carried off the field on a stretcher after a concussion he sustained while playing for the Ravens (watch the hit below). Although McGahee was knocked out cold on the play, he later told Esquire that he didn’t consider the concussion an “injury” per se.

“That’s what they consider it,” McGahee said. “But getting a concussion and hurting your knee are two different things. You get back up from a concussion.”

LaMar Miller was forced out of Week 14 after he “was hit hard by Pittsburgh safety Ryan Clark” in the third quarter, ESPN reported. The Dolphins running back did not return, becoming the second Miami player in as many weeks to suffer a head injury. In Week 13, the Dolphins lost guard John Jerry to a concussion.

The Jaguars announced that third-year safety Chris Prosinski sustained a concussion in Week 14 and would be added to the league’s concussion program. It’s not clear how Prosinski was hurt, but the head injury was his second of the 2013 season. Prosinski also suffered an apparent concussion in training camp, though because it came in the preseason, it was never counted on the league’s official injury report. The only preseason injuries added to the report are for players who are deemed injured entering Week 1 of the regular season.

The Ravens confirmed that Brandon Stokley suffered a concussion in Week 14. As NBC Sports pointed out, the head injury is at least the 14th of his football career:

Stokley said after suffering a concussion at the end of the 2010 season that he had suffered more than a dozen concussions in high school, college and the NFL. Today Ravens coach John Harbaugh confirmed that Stokley suffered another one … Stokley, however, has said every time the subject of concussions comes up that he loves football too much to walk away. He’ll keep playing as long as he can, even if the concussions continue.

Wes Welker suffered his second concussion in three weeks after a bruising hit from Titans safety George Wilson. Welker was diagnosed with a head injury and ruled out for the rest of the game.

In Week 11, Welker was checked by doctors on the sideline after a helmet-to-helmet hit by Chiefs defensive end Allen Bailey. He was allowed to return, but then reported concussion-like symptoms after the game. The Broncos later confirmed the injury, but curiously listed Welker on the team injury report with a “neck” injury, not a concussion.