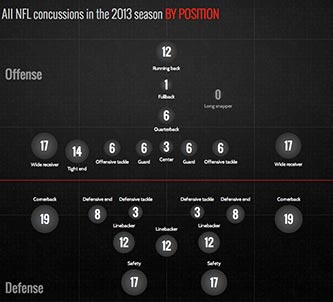 After three straight weeks of double-digit gains in the NFL concussion count, the pace of new head injuries appeared to tick down in Week 15 of the 2013 season, with at least seven new injured players.

With just two weeks left in the regular season, these are the names that we’re watching for on the next NFL injury report, as well as our roundup of the top concussion-related headlines from the past week:

Linebacker Russell Allen went down with a head injury in Week 15, Jaguars Coach Gus Bradley confirmed. Allen was placed in the league’s concussion program, though it’s not clear how exactly he was injured.

Jacksonville has reported 8 concussions this season, more than any other team.

Nineteen cornerbacks have suffered concussions in the NFL this season, more than any other position in the league. In Week 15, Brandon Boykin appeared to become No. 20.

Boykin went down with a concussion during a kickoff return. According to The Philadelphia Inquirer:

During the return, Boykin was tackled in a way where he landed on his head. It wasn’t a pretty scene. Boykin remained down on the field for a decent amount of time before walking off the field with some help of the trainers. Boykin’s chances of returning to the game was originally ruled as questionable before being downgraded to out.

On Monday, Coach Chip Kelly had little to add about the injury, noting that he had yet to talk to the team’s medical staff about it.

With New York trailing in the third quarter, Cruz leaped for a pass but was slammed to the ground by Jeremy Lane of the Seahawks. “He did not get up right away and walked gingerly back to the sideline before heading to the locker room for further evaluation,” ESPN reported.

After the game, Coach Tom Coughlin had no update on Cruz’s status.

Larry Fitzgerald left the field for the Cardinals in Week 15 to be evaluated for a head injury, the team announced on Twitter. Fitzgerald was hurt while trying to haul in an onside kick in the fourth quarter. With 52 seconds to go in the game, Fitzgerald jumped to recover the ball and was hit by Jackie Battle of the Titans in what appeared to be a helmet-to-helmet collision.

The concussion scare was not Fitzgerald’s first. The Cardinals receiver was also evaluated for a concussion during the 2012 season, and suffered one in the 2010 season, according to a report on NFL.com.

Bengals linebacker James Harrison was forced out of Week 15 with concussion symptoms, Cincinnati announced on Twitter.

Concussions are not a new issue for Harrison either. In 2012, he told ESPN that he had dealt with “double digit” bouts with head injuries over his NFL career. Harrison said his injury history led him to install a layer of military-grade Kevlar padding inside his helmet to better protect his head.

At the time, Harrison noted that the league was handing out “crazy fines” to players who make illegal hits, but was doing little to update equipment.

“The league is mandating next year that we wear thigh and knee pads,” Harrison said. “I don’t know how many people’s career has been ended on a thigh or knee bruise. We have guys now that are 30, 31 years old that are having to quit the game because they have severe headaches … I think you should be focusing more on (the helmet) than knee or thigh pads.”

Guard Joe Reitz was sidelined by a concussion in the first half of the Colts’ Week 15 win over the Texans, ESPN reported. The concussion was Reitz’s third head injury in two seasons. In 2012, he was one of at least 10 NFL players to suffer multiple concussions.

Nate Solder almost didn’t play in Week 15, as the Patriots offensive tackle was recovering from a concussion suffered in Week 14 against the Browns. New England ultimately cleared Solder to play, but by the end of the game he had suffered his second concussion in as many weeks and the fourth of his three-year NFL career. As ESPN reported:

On Solder’s final play, he was blocking end Olivier Vernon on an outside rush, and as Vernon bended around the edge, Solder got low and pushed him to the ground. In the process, Solder fell to the ground and Dolphins end Cameron Wake, coming from the other side, appeared to make contact with his helmet as he fell.

If the injury is confirmed, Solder would become one of six NFL players to face repeat head injuries in the 2013 season.