With just one week left in the NFL regular season, the league’s 32 teams are on track to report their second-highest concussion total in four years. 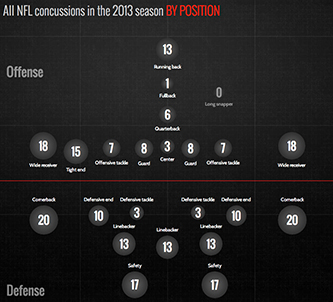 Through 15 weeks of play, FRONTLINE’s Concussion Watch project has tallied 135 head injuries — an average of nine per week — listed on the league injury report. The 153 concussions teams are projected to report would be down from last year’s total of 171, but up 18.6 percent from the 129 reported in 2010, the first season under a new series of measures designed to reduce the risk of concussions. Those measures have come to include mandatory guidelines for removing injured players from games, a new rule geared toward limiting kickoff returns, and limits on striking opponents with the crown of the helmet.

In Week 16, at least nine more players appeared to suffer a head injury. As the regular-season finale draws closer, these are the names that we’re watching for on the next NFL injury report, as well as our roundup of the top concussion-related headlines from the past week:

Bill Bentley went down with an apparent concussion in Week 16 after colliding with teammate Louis Delmas in the end zone. Bentley also suffered a concussion in the 2012 season opener. That injury forced him to miss one game for the Lions, but Bentley insisted it wouldn’t push him to alter his style of play.

“I can’t go out and worry if I’m going to get hurt or not,” he said. “God has a plan for everything, so whatever happens, happens.”

Andre Brown left the field to be tested for a concussion in Week 16 after fumbling the ball early in the game’s overtime period. The Giants ruled Brown out of the game after confirming the injury, according to ESPN’s Dan Graziano.

Brown took to Twitter after the win to say he was fine. The head injury was the second in as many seasons for the Giants running back. Brown also went down with a concussion during Week 5 of the 2012 season, missing one game as a result.

It wasn’t clear when Burfict was hurt, but according to ESPN, “Burfict did deliver a helmet-to-helmet hit late in the third quarter on one of his final plays of the game.”

There were few details to add on the injuries to Smith — who missed three games in 2012 because of a head injury —  or McCalebb.

Taken together, the injuries mean that for a second straight week, the Bengals have added three players to the NFL’s the concussion protocol. Last week, linebacker James Harrison, defensive end Carlos Dunlap and offensive lineman Andrew Whitworth were all recovering from concussions.

Dorin Dickerson suffered a concussion in the second half of Detroit’s Week 16 loss to the Giants, but he didn’t report the injury until after the game entered into overtime, according to an ESPN report. “Got a little concussion. Should have reported it,” Dickerson said. “Thought I could get through it.”

A team spokesman said Dickerson reported the injury at the 13:46 mark in overtime, at which point he went into concussion testing.

“I mean, honestly, probably, after we leave here, I probably won’t remember talking to you guys,” Dickerson said. “I’m not trying to make excuses. I’m just telling the truth.”

It’s unclear why Dickerson was allowed to speak with reporters after the game. As NBC Sports noted, “League rules prohibit concussed players from meeting with the media. Unless the Lions determined Dickerson didn’t have a concussion, he shouldn’t have been talking.”

Patriots safety Devin McCourty suffered a scary collision in the third quarter of New England’s Week 16 win over the Ravens. As The Boston Herald reported:

[McCourty] went low for a tackle on Ed Dickson and hit the back of his head on Dickson’s leg. McCourty stood up but stumbled to the side before his teammates quickly held him upright, and shortly after that he was ruled out.

Phil Taylor suffered a concussion in the third quarter of the Browns’ Week 16 loss to the Jets, Coach Rob Chudzinski confirmed after the game. Chudzinski added few details on how or when the injury occurred.

Steve Vallos was ruled out of Week 16 with a concussion after a violent collision with Texans lineman Jared Crick on a first-quarter kick return.