Saying Goodbye During the Coronavirus Pandemic in “The Last Call”

This story and video were co-published with The New Yorker. Producers Marcela Gaviria and Martin Smith captured this story while filming their newest FRONTLINE documentary, The Virus: What Went Wrong?, which will be broadcast on PBS and start streaming Tuesday, June 16, at 9:30/8:30c.

On April 15th, a little more than six weeks after it recorded its first confirmed case of COVID-19, New York City experienced eight thousand and twenty-one new cases of the virus, its highest such daily tally. In that time, the city had become the epicenter of the coronavirus pandemic in the United States, which itself had surpassed any other country in the world in confirmed cases. On Monday, a hundred days after that first case was recorded, the city began “phase one” of its reopening. It comes as New York continues to reel from the destruction wrought by the pandemic: more than two hundred and twelve thousand confirmed cases, resulting in nearly twenty-one thousand and four hundred deaths, an abysmal mortality rate of almost ten per cent. (The U.S. rate, according to the Centers for Disease Control and Prevention, is around five and a half per cent, which is consistent with the world average as recorded by the World Health Organization.) “The Last Call,” a short documentary co-produced by FRONTLINE and The New Yorker during reporting for the new FRONTLINE documentary The Virus: What Went Wrong, illustrates the personal pain behind just one of those numbers.

Jessica Caro, a New York City nurse, saw multiple members of her family contract the virus. Caro’s daughter grew ill in early March, developing a cough and a fever. “You know, normal nurse mom is just, like, throwing her some Motrin and saying, ‘You’ll be fine, you’ll be fine,’ ” Caro says. But then, “the first time that I finally got a thermometer on her, I almost dropped it, because it was a hundred and five.” Numerous text exchanges between Caro and her mother are shown onscreen, in text bubbles. “How’s Jianna?” one reads, referring to Caro’s daughter. Above it appears Caro’s mother’s name as recorded in her phone: Mami.

During Jianna’s illness, the presence of the coronavirus had not yet become a fact of daily life in the U.S.; New York and the rest of the country could still speculate on the magnitude of what was to come. Caro got her daughter tested for strep throat, mononucleosis, the flu, all of which came back negative. The one test that she couldn’t secure for her was also the most important, in light of the budding pandemic’s exponential growth. On the advice of her daughter’s doctor, Caro called New York State’s coronavirus hotline, to request a COVID-19 test, but was denied one—her daughter hadn’t travelled to China, been in contact with someone who was known to have tested positive, and wasn’t, at the time, despite being ill, short of breath. “At that point, I was furious,” Caro says.

Just as Caro’s daughter began recovering, her disabled aunt became ill. Both Caro’s aunt and grandmother lived with Caro’s mother, in the Riverdale section of the Bronx, in the apartment where Caro grew up. Every time the family called 911, to take Caro’s aunt to the hospital, “they would kind of tell us the same thing,” Caro says. “Like, ‘Listen, the hospitals are just overwhelmed. She’s sick but she’s not that sick. We can take her, but she may not come back, because this is how bad it is over there.’” Caro’s aunt was finally taken to the hospital on April 4th, after her condition had deteriorated. It was at this time that Caro’s mother told her, reluctantly, that she, too, had developed a fever and had started coughing. She implored Caro to stay away, for fear of infecting her. One text message that she sends Caro in the following days is especially poignant: “Today I still feel weak I took a bath and had something to eat”—modest activities that, in health, would easily be taken for granted, but which, in a state suffused with illness and fear, are heart-wrenching, like final comforts.

The last time that Caro was able to fully speak with her mother, they talked of how much they loved each other, and how they wished to embrace: Caro stood outside her mother’s apartment door, while her mother stood on the other side, looking through the peephole. It was at this time, Caro later learned, that her mother started becoming short of breath. The following morning, paramedics picked her up to take her to the hospital. That night, she was intubated and placed on a ventilator.

In an especially powerful scene, we see a medical worker FaceTiming with Caro, so that Caro can see her mother hooked up to a ventilator. When the worker pans to the hospital bed, the image brings both relief and horror: Caro’s mother is still alive—and fighting, as Caro urges her to—but she also appears to be being swallowed by the very machine whose tubes she herself was made to swallow, almost one with the device that’s helping pump her lungs. “Mama linda,” Caro says: my beautiful mother. “I love you so much.”

Caro’s mother died on her eightieth birthday, after sixteen days on the ventilator. She died in the way most of the pandemic’s more than four hundred thousand victims have died: alone, without friends or family near, the final consolation of her daughter’s voice, if indeed she could register it, coming through a phone held in the hand of a stranger. “It’s just not fair,” Caro says, “that that’s what this virus has left us with.” 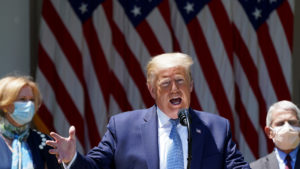