Farmworkers Are Among Those at Highest Risk for COVID-19, Studies Show

As the novel coronavirus spread across the U.S., Osmar Orellana kept going into work. Unlike millions of Americans who were able to shelter in place, Orellana was deemed “essential”: He works as a lettuce picker for a large grower called Tanimura and Antle in Salinas, California, a region that produces most of the country’s leafy greens.

“I was afraid, and I was really stressed at work, thinking that I could get this disease,” he told FRONTLINE for the documentary COVID’s Hidden Toll.

In a matter of weeks, his fears had been realized: Orellana tested positive for COVID-19.

Dr. Don Villarejo, the author of the new report and a researcher at the California Institute for Rural Studies (CIRS), analyzed the county’s daily COVID-19 cases against the industry in which each person was employed when they contracted the virus. He found that as of July 1, the prevalence of COVID-19 for agricultural workers was 1,410 positive cases out of 100,000, while the rate for workers in all other industries was 455 cases per 100,000 — a difference of almost 1,000 cases. He found the vastly higher rate of infection was due to working and living conditions that make it nearly impossible to maintain physical distance from others.

“It’s very possible that people are in a situation where more infections can happen,” said Dr. Rebecca Fielding-Miller, an epidemiologist studying infectious disease at the University of California, San Diego in the Division of Infectious Disease and Global Public Health. She and researchers at UC San Diego and Emory University’s Rollins School of Public Health are studying how social inequity may be driving coronavirus infections. “Then people go back to their household and their communities, and you can think of it as linked links in a chain.”

Fielding-Miller’s study found a disturbing impact: across the country, the death rate from COVID-19 is much higher in counties with large populations of farmworkers. Those most at risk in rural counties: “Individuals who do not speak English, individuals engaged in farmwork, and individuals living in poverty,” she found.

Where Orellana works, everyone uses the same bathrooms and drinks water from the same drinking fountains. In the fields, harvest crews work side-by-side cutting rows of vegetables, making it impossible to keep six feet apart.

Housing is scarce and expensive, so multiple families often crowd into one small home. More than 70 percent of the region’s agricultural workers live in crowded or extremely crowded dwellings, according to census data — meaning they are unable to have personal space or maintain privacy. Villarejo’s study found that the east Salinas Valley, where Orellana lives, was one of the most overcrowded regions for farmworkers in the state.

Crowding isn’t confined to the home. Many farmworkers do not have access to a personal vehicle, and rely on company transportation and carpoolers, also known as “raiteros.” Villarejo said some companies are trying to implement social distancing in their vehicles, keeping riders at least six feet apart, but there’s no such oversight for carpooling. “How are you going to get these six people in a car six feet apart each?” he asked. “You can’t do it.”

In early April, Orellana heard from coworkers that someone in their crew had tested positive for the virus. When he asked supervisors about the infection, he was told by the company they could not give any information, even if a worker had tested positive.

He considered self-isolating, but feared losing his job. “I was worried because I already had symptoms,” Orellana said. “I was afraid of going into quarantine because we weren’t given the information that if we would go to quarantine we would get paid.” Like many farm workers, Orellana lives from paycheck to paycheck, so missing work is not an option.

Days later, he developed a fever, headaches, and a sore throat. He got tested with his brother and his wife — who also work in the lettuce fields. They all came back positive. The three of them lived in a single room for 14 days; it was the only way to keep their eight family members — including four children and elderly parents — safe.

Orellana’s employer, Tanimura and Antle, did not respond to multiple requests for interviews. A company update said it is following local, state and federal guidance to stem the spread of the virus, and that its worksites have always had gloves and hand washing stations available.

While Orellana received a mask from Tanimura and Antle, we heard from workers throughout Monterey county that they received no such equipment. “The moment the state and federal governments announced that this workforce was an essential workforce, we began looking at what resources were available to them,” said Cuevas, who runs the clinic network. “We noticed that there was a paucity of resources available at the time, so we thought, let’s jump in.” Cuevas’s clinic began making and distributing masks to farmworkers throughout the region.

The federal Occupational Safety and Hazard Administration (OSHA) has issued workplace guidance to protect employees from COVID-19, including encouraging employees to stay home if they’re sick, promoting frequent hand washing, and implementing regular sanitation procedures. None of the guidance is mandatory.

OSHA declined to speak with FRONTLINE, but said in a statement that it is taking steps to address unsafe workplaces, and that the voluntary guidelines were enough to protect workers against COVID-19.

David Michaels — the head of OSHA during the Obama administration — said it was clear the recommendations weren’t working. “The recommendations are out there, but we know that they’re not being followed enough,” he said.

In the meantime, Orellana and his family are still going to work in fear. “My main concern,” Orellana said, “is that we will go back to work and we don’t know if someone is sick. We could get sick again.” 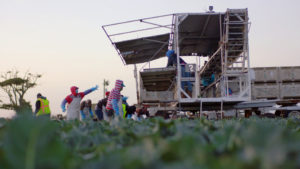