In the 10 years since 9/11, FRONTLINE has produced more than 45 hours of award-winning films documenting the attacks and America’s response to them. Here’s a closer look at some of the films from our archive that closely examine elements of Top Secret America. 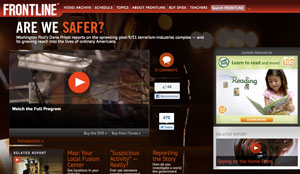 In January, we went inside the post-9/11 terrorism-industrial complex with Top Secret America reporters Dana Priest and William Arkin. We examined what happens at the 72 local intelligence fusion centers across the U.S. and looked at exactly what activities authorities are looking for when they file suspicious activity reports. And Gen. Michael Hayden, who headed the NSA and CIA, told us even he didn’t know the size and scope of the programs inside Top Secret America. 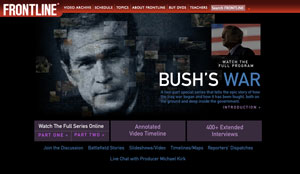 On the fifth anniversary of the war in Iraq, we looked back at the defining moments of the wars in Afghanistan and Iraq, and examined President Bush’s legacy for the incoming president. We collected more than 400 of our extended interviews with Bush administration officials, top intelligence officials and on-the-ground operatives, military leaders and soldiers, those responsible for homeland security and others. We also created an innovative video timeline of the key turning points in the years leading up to 9/11 and afterwards.. 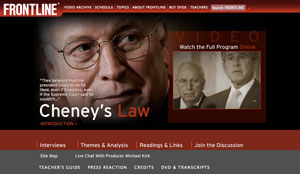 In this film we explored how Vice President Dick Cheney and his chief counsel David Addington were behind a number of the controversial legal decisions from the White House and Justice Department that interpreted executive power in an expansive and extraordinary way — and granted President Bush the power to detain, interrogate, torture, wiretap and spy without congressional approval or judicial review. Jack Goldsmith, a law professor and rising star in conservative legal circles, who became head of the Justice Department’s Office of Legal Counsel, told us how soon after joining the DOJ in 2003 he realized there were “big problems” with the legal foundations underpinning some of the war on terror’s most important programs. He withdrew some of those opinions and ensuing confrontations with the White House legal team led to a rebellion at the Justice Department that nearly ended in the resignations of Attorney General John Ashcroft, FBI Director Robert Mueller and other top officials. 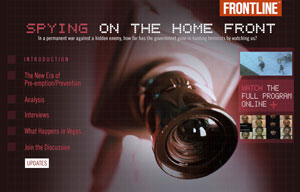 Here we took an in-depth look at the government’s secret surveillance of millions of American citizens. Mark Klein, who worked as an AT&T technician for more than 20 years, told us how he inadvertently discovered that the entire flow of traffic in several AT&T operations centers was regularly being diverted to the NSA. But former Attorney General John Ashcroft maintained the program was necessary in a new era of preventing attacks. 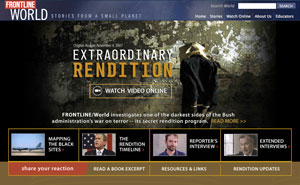 FRONTLINE/World correspondent Stephen Grey tracked down several “ghost prisoners” for this report on the CIA’s secret program in which the United States captures terror suspects around the world and flies them to countries like Egypt, Syria or Morocco, where, critics say, torture is routine. Among the web features — a history of the rendition program — which started in 1995 — and a map of the CIA’s worldwide “black sites”. 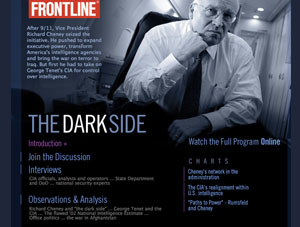 A number of high-ranking CIA and Defense Department officials spoke to us for this investigation of the intelligence battles between the White House and the CIA in the war on terror and the run-up to war in Iraq. We looked at how Vice President Cheney placed a network of allies throughout the executive branch only to face off against CIA Director George Tenet, who had developed a personal rapport with the president. 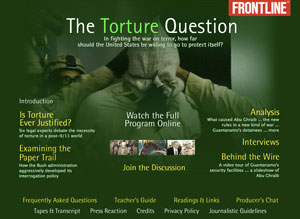 Here, we traced the history of how decisions made in Washington in the immediate aftermath of Sept. 11 — including an internal administration battle over the Geneva Conventions — led to a robust interrogation policy that laid the groundwork for prisoner abuse in Afghanistan, Guantanamo and Iraq. John Yoo, who authored many of the controversial memos that gave President Bush extraordinary power to prosecute the global war on terror, outlined in extensive detail the logic behind his decisions.

President Biden said July 26 the U.S. combat mission in Iraq is drawing to a close. These documentaries illuminate the Iraq War and its aftermath.
July 28, 2021

A curated and regularly updated list of news articles from our partners in “The Pegasus Project,” a collaborative investigation among 17 journalism outlets around the world.
July 28, 2021

Amid the withdrawal of U.S. troops, Taliban leaders claim Iran is mobilizing its proxy militia the Fatemiyoun for civil war within Afghanistan.
July 20, 2021
Show more