As everyone starts digging into Warren’s past (hello, journalists), we thought we’d give you a hand. We’ve published three extensive interviews with Warren, starting in 2004.

+ The Secret History of the Credit Card (2004): Warren discusses the problems with America’s massive consumer loan industry, and offers some interesting insights as to why she studies bankruptcy:

She also tackles the credit card lobby, calling it “a great big multibillion-dollar industry talking to Congress, whispering in their ear.”

+ Can You Afford to Retire? (2006): Warren explains the history of pensions; why many Americans are losing theirs; and how bankruptcy laws play a major role in this:

What we are starting to create now is a notion in the United States that it’s old-fashioned and clearly unprofitable to make good on your promises to your employees and retirees.

+ Breaking the Bank (2009): Among the issues she expounds upon are the Troubled Asset Relief Program [TARP] bailout; her disappointment with Treasury Secretary Tim Geithner’s first speech to the American people; and her plans for the TARP Congressional Oversight Panel, which she chaired. She says that more people should have seen the ’08 financial crisis coming:

If we don’t know that there’s a problem, then it’s because we’ve got our fingers stuffed in our ears, our eyes taped shut, and we’re singing, “La, la, la, la, la, I can’t hear you.”

Also check out these three video excerpts from her extended interview (scroll down, they’re towards the bottom). 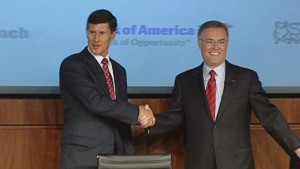