A still image from the November 2021 documentary 'Pandora Papers,' from FRONTLINE and ICIJ.

It has been a busy stretch for financial anticorruption efforts in Washington.

Last week alone, the Biden administration released a plan outlining federal efforts to make the United States a less welcoming destination for controversial financial assets. The same day, Financial Crimes Enforcement Network, a bureau of the Treasury also known as FinCEN, released a proposed rule for the landmark Corporate Transparency Act. And two days later, the House Ways and Means Subcommittee on Oversight held a hearing on hidden wealth in the U.S.

All of this movement follows the revelations of the Pandora Papers, an investigation led by the International Consortium of Investigative Journalists and 150 news organizations, including FRONTLINE, into a financial system that shields the deals and assets of some of the world’s richest and most powerful people. Nearly 12 million confidential files leaked to ICIJ provided the basis for the partners’ reporting, including the November documentary Pandora Papers, from FRONTLINE and ICIJ.

But what does the flurry of activity mean? And does any of it directly address trusts, an opaque industry that, as Pandora Papers revealed, has brought millions in hidden assets to South Dakota and other U.S. states?

The Biden administration unveiled the U.S. Strategy on Countering Corruption on Dec. 6. The announcement followed a June memo that identified money laundering as a national security priority. The new plan consists of five broad pillars that range from providing more resources for government anticorruption efforts to holding financial-services professionals accountable.

The plan specifically calls for greater scrutiny of those who administer trusts, as well as lawyers, accountants and other gatekeepers to the U.S. financial system who “are not required to understand the nature or source of income of their clients” under current federal regulations, according to the strategy document. “Yet, they help raise funds, provide advice on investments, structure transactions, and can serve as an access point to the U.S. and international financial systems, including by facilitating the creation of opaque corporate vehicles.”

The strategy intends to extend the U.S.’s current anti-money-laundering framework to cover professionals who administer trusts, said Erica Hanichak, government affairs director of the FACT Coalition, an anticorruption advocacy group. Much of that framework currently applies to banks and the stock market but not to these gatekeepers.

“[It] is taking a crucial step to maintain the integrity of the U.S. financial system and ensure that the opacity of this sector is not exploited by kleptocrats, criminals, terrorists, tax evaders and the like,” she said.

Ian Gary, executive director of the FACT Coalition, said that while the Biden administration stakes a strong position with the strategy, “The issues … will be related to when the strategy meets the real world, after the excitement of this week has faded.”

“We’ll be watching very closely to see whether the resources that are needed — financial, human and otherwise — are devoted to implementing the strategy,” he said.

Also on Dec. 6, FinCEN released a draft of the first of three rules intended to implement the Corporate Transparency Act, a landmark federal law passed in January that banned anonymous shell companies in the U.S..

The rule deals with making opaque corporate structures and their beneficiaries more transparent. Before the rule was released, experts had wondered whether the act would address trusts, in addition to shell companies and other corporate entities.

“It looks like they are doing what they can to address trusts,” said Gary Kalman, the U.S. director of Transparency International, an anticorruption nonprofit.

The proposed rule lays out the types of companies it would cover, including any entity created by filing a document with a secretary of state or a similar office.

Certain types of trusts, however, would be exempt from the law, a concern Kalman had previously raised.

“A lot of trusts don’t file anything with anyone. It’s just a contract held by a lawyer. So, there’s nothing that [FinCEN] can do about those types of trusts” under the current draft language, Kalman said.

“There are certain trusts and other entities exempt from the Corporate Transparency Act that may still pose risks,” Hanichak said. “There’s an opportunity for Congress to help fill that gap, examine those exemptions and see if they warrant further legislative action.”

The draft rule has a public comment period of 60 days, but Hanichak said it’s rare for draft rules to change much once they have been released.

“We’ll be weighing in during the comment period and are interested to see who else decides to respond during this critical moment,” she said.

On Dec. 8, the House Ways and Means Subcommittee on Oversight held a hearing into the Pandora Papers and Hidden Wealth.

In his opening remarks, subcommittee chair Bill Pascrell (D-N.J.) said the hearing aimed to review “how and why the wealthy and powerful are hiding their assets in South Dakota and other states that have similarly inviting trust, asset protection and banking secrecy laws.”

“By the Ways and Means subcommittee holding this hearing, it sends a clear signal that Congress plans to take action in the wake of the Pandora Papers to close this vital loophole,” Hanichak, who testified at the hearing, told FRONTLINE later.

The hearing saw some partisan back-and-forth over the need for greater transparency, with Rep. Mike Kelly (R-Penn.) and Rep. Lloyd Smucker (R-Penn.) arguing that more disclosure requirements could lead to more private information being leaked to the press, referencing the use of leaked material in investigations such as the Pandora Papers.

Also in the hearing, Rep. Steven Horsford (D-N.V.) asked Hanichak whether “the adaptability of the financial system” would help individuals evade scrutiny in other ways, even if gatekeepers are more closely regulated.

In her response, Hanichak referenced the Corporate Transparency Act draft rule released two days earlier, saying FinCEN should make the rule apply broadly enough that “we’re not just regulating one entity today that will contort into the next entity.”

“Working with the administration to make sure that’s robustly carried out would be critical for Congress to follow through with,” she said.

Pandora Papers is available to watch in its entirety above, in FRONTLINE’s online collection of streaming documentaries, on the PBS Video App and on FRONTLINE’s YouTube channel. 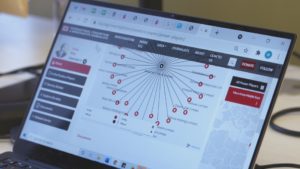