Meth lab seizure rates have fallen dramatically this year in several states that usually lead the nation in busts: Tennessee, Arkansas and Michigan have all seen drops in the 30 percent range. But a recent AP Impact investigation found that it’s not because fewer people are making the drug; rather, cuts in a federally-funded program have left states with little to no money to clean up the toxic byproducts that are left over from seizures.

The program, known as Community Oriented Policing Service or COPS, dolled out $19.2 million to states in 2010; the AP reports that “the money was not renewed and is unlikely to come back.” A typical cleanup costs approximately $2,500 per lab, even if it’s an increasingly common “shake-and-bake”-style lab like those we profiled in our recent update to The Meth Epidemic. Disturbingly, some local sheriffs have considered drastic and unsafe methods of disposal, including illegally taking waste to a landfill and burning it.

In contrast, the AP found that states with independent cleanup programs have seen increases in busts — Missouri is up 9 percent, Kentucky 34 percent and Illinois up 36 percent. 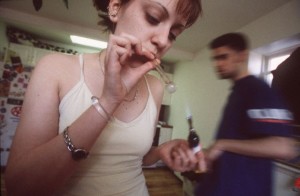