Only a few weeks after the January 2010 earthquake, FRONTLINE producers Martin Smith and Marcela Gaviria traveled to Haiti to bear witness to the tragedy. Featuring never-before-seen footage of the moments after the quake and interviews with top officials from Port-au-Prince to Washington, their film The Quake ultimately asks how the world might respond.

We soon found out. As Secretary of State Hillary Rodham Clinton told us, the reaction from the international community — as well as ordinary Americans — was overwhelming:

This is not the United States coming in and saying, “Oh, let us fix it.” This is the United States along with international organizations and countries from France to Canada to Brazil to Japan saying, “We all will play a role.” Nearly half of all American households have contributed to Haiti relief.

Many of the experts Smith and Gaviria interviewed insisted that there needed to be a new way of thinking about and using foreign aid, and that the world needs to turn away from an NGO-heavy model that hasn’t worked particularly well in the past.

So what’s happened in the year and a half since the quake? It’s a story we’ve been following, as has Planet Money‘s Adam Davidson and his team. And at times we’ve reported together, asking how a nation of NGOs becomes a self-sustaining economy.

In part this shift starts on a micro level, as Davidson and producer Travis Fox found 10 weeks after the earthquake in Port-au-Prince’s largest tent city. “Now,” reported Davidson, “the only way to make a living is to sell things in the camp.” Thus, entrepreneurs sell anything from food and water to pedicures to stereos; Davidson found that the tent city actually had more small business competition than the city before the earthquake:

[Listen to a radio version of this story at NPR.]

There are also the famous colorful “tap-tap” buses that Haitians use for transportation, because only about 3 percent of the population owns a car. Tap-tap owners hire people to design and then paint the buses, paying them $400-$800 for each job — more than most Haitians make in a year.

Why do the owners pay so much? Davidson explains that essentially, it’s the economic concept of signaling: With little information other than what the bus looks like, passengers must choose which bus will safely get them to their location. If an owner pays that much to keep their bus painted, they’re probably paying money to get the brakes fixed, too. Watch the story here:

[Listen to a radio version of this story at NPR.]

We also jointly examined a bigger issue: how post-disaster relief can end up creating new economic problems. In this case we looked at how the massive influx of food aid has altered the price of rice, throwing the delicate balance in Haiti’s food supply chain out of whack and threatening to collapse the country’s rice market. It’s the kind of problem that can turn a one-time disaster into a crisis that lasts years:

Five months after the quake, Davidson and his Planet Money colleague Chana Joffe-Walt teamed up with This American Life for an entire episode devoted to the complicated aid question. What’s astonishing, says Joffee-Walt, is that most Haitians’ problems aren’t “big and complicated;” in fact, they’re “so, so small.” Case in point is the idea of exporting mangos, an idea that came before the quake. Should be easy to make happen, right? It’s not, and it’s ultimately a lesson as to why good-intentioned aid doesn’t actually work a lot of the time. Can the earthquake be the catalyst for dramatic change, or will we miss the opportunity to help teach Haiti how to rebuild itself? Take a listen:

But can Haiti rebuild itself without the rule of law? One year after the quake FRONTLINE explored this question in Battle for Haiti, which looked at the dramatic violence threatening the country’s stability — and future. 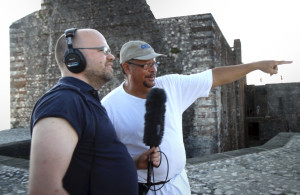