The Reichstag building, in Berlin, seat of Germany's Bundestag, or federal legislative branch, in a still from the FRONTLINE documentary "Germany's Neo-Nazis & the Far Right."

A troubled history is alive in Germany — both in a resurgence of far-right ideology and in new changes to the laws designed to combat that extremism.

The FRONTLINE documentary Germany’s Neo-Nazis & the Far Right tracks the recent growth of far-right violence in the country, investigating how neo-Nazi groups are using internet platforms to recruit and to organize. To address this resurgence, German authorities look to a system of hate speech laws passed by the Bundestag, Germany’s federal legislature, over the 76 years since Adolf Hitler was defeated and that are still evolving today.

The German penal code prohibits publicly denying the Holocaust and disseminating Nazi propaganda, both off- and online. This includes sharing images such as swastikas, wearing an SS uniform and making statements in support of Hitler.

It also places strict rules on how social media companies must moderate and report hate speech and threats. These hate-speech laws were tightened last year, after three far-right terror attacks in 2019 and early 2020 prompted German authorities to warn of increasing extremism.

“The waves of hatred are even more aggressive than before the pandemic,” said Christine Lambrecht, Germany’s minister of justice, in an April 2021 statement about the new regulations. “The agitation is very often right-wing extremist, racist and misogynist. It is a serious threat to our democratic society when people are attacked because of their name or their appearance — or are silenced because they express themselves politically, scientifically or socially.”

Germany’s laws on hate speech and Holocaust denial stand in sharp contrast to the United States, where the First Amendment limits the role of government in restricting speech. Germany’s speech laws are rooted in its history and national identity, said Robert Kahn, a professor at the University of St. Thomas School of Law who studies German hate-speech law.

“Anybody who denies the Holocaust undermines the sense of post-1945 Germany,” Kahn said.

Authorities in Germany believe that fascist organizations could pose an existential threat, recalling how Hitler used the electoral system to gain influence until he had the power to abolish the country’s democracy entirely. “Right-wing extremism is the most vital threat that we face at the moment in the Federal Republic of Germany,” Stephan Kramer, chief of intelligence in the German state of Thuringia, said in Germany’s Neo-Nazis & the Far Right.

Below is an introduction to the key laws governing hate speech and Holocaust denial in Germany.

The law bans incitement to hatred and insults that assault human dignity against people based on their racial, national, religious or ethnic background. In post-World War II Germany, it has been used to prosecute racist and antisemitic threats and slurs, and it carries a sentence of up to five years in prison.

Section 130 did not always target racism and antisemitism. The law dates back to the creation of the German criminal code in 1871 and originally focused on incitement of class warfare as a response to the spread of Communism, Kahn said. Following a wave of scandals revealing the Nazi pasts of West German public officials in the 1950s, the law was amended to target neo-Nazi incitement.

The law was expanded to explicitly ban Holocaust denial in 1994, after a federal appeals court overturned the sentence of a far-right German politician who had organized a lecture describing the gassing of Jews at Auschwitz as a hoax. It is punishable by a sentence of up to five years.

In an interview with FRONTLINE, Christoph Hebbecker, a German federal prosecutor who specializes in digital hate crimes, described a recent case in which a German woman was charged with incitement after posting on the Russian social media platform VK that Syrian refugees should be shot upon entering Germany. “She was in relevant groups; her favorite book was Mein Kampf; and she wrote posts like that and similar ones,” Hebbecker said of the woman, who did not have a previous criminal record. She was convicted and sentenced to 11 months of probation and a fine, Hebbecker said.

Other prosecutions of Section 130 have carried comparatively harsher punishments. In 2007, Germar Rudolph, a German chemist who previously worked at the Max Planck Institute in Stuttgart, was convicted of Holocaust denial and sentenced to two and a half years in prison.

In addition, Germans face up to three years in prison for “approving of, glorifying or justifying” Nazi rule. This provision was added in 2005, in response to an increase in far-right extremist demonstrations, according to a report by the British free speech organization Article 19.

German law also prohibits a range of personal insults, from malicious gossip against private citizens to defamation against politicians. Like Section 130, it dates back to the 19th century.

One element of the law — a ban on defiling the memory of the dead — has been used to try Holocaust deniers. Prosecutors can seek fines or up to two years imprisonment for violations.

In one well known case from 2007, a court in Mannheim, Germany, convicted Ernst Zündel, a Holocaust denier and publisher of neo-Nazi propaganda, of violating the memory of the dead. The charge was part of a broader incitement case, and Zündel was sentenced to five years in prison.

Insult-law cases can proceed only with the consent of the victim or the victim’s family, if the person is deceased.

These provisions ban the distribution of online and offline propaganda and the public display or distribution of  “flags, insignia, uniforms, slogans and forms of greeting” belonging to political parties and organizations that have been deemed unconstitutional by the Federal Constitutional Court, such as Nazis and neo-Nazis.

In one prominent case, the videogame Wolfenstein 3D, which features Nazis as antagonists, was banned in 1998 for including swastikas and other Nazi imagery. The government reversed course in 2018, deciding video games could qualify under Section 86a’s exception for artistic, educational and journalistic works.

The original Network Enforcement Act, passed in 2017, required social media companies to take down such posts — in most cases, within 24 hours after receiving a complaint. In 2019, the German federal government fined Facebook €2 million (about $2.3 million) for allegedly under-reporting the number of complaints it received.

The Bundestag tightened social media regulations further in 2020, following three terror attacks in Germany by far-right extremists in 2019 and early 2020: the assassination of the pro-refugee politician Walter Lübcke; shootings outside a synagogue in the town of Halle, on Yom Kippur; and a mass shooting in Hanau. In the Halle and Hanau attacks, the killers had been radicalized exclusively on the internet. In response, the 2020 changes to the Network Enforcement Act toughened penalties for online insults and increased reporting requirements for social media companies.

Voicing public approval of serious crimes that have not yet been committed can now be prosecuted, raising the possibility of charging people for sharing or approving of threatening social media posts. And platforms that take down neo-Nazi propaganda, threats of serious violence or media depicting sexual abuse will be required to report those users’ IP addresses to Germany’s federal police, under a provision set to take effect in 2022.

The law has drawn opposition for invading privacy and interfering with freedom of speech from both left- and right-wing political parties in Germany, as well as from journalism organizations and internet-freedom advocates.

“The law raises serious concerns about freedom of expression and the right to privacy online,” David Kaye, the United Nations special rapporteur to the High Commissioner for Human Rights, wrote in a statement when the law was originally proposed. “The short deadlines, coupled with the afore-mentioned severe penalties, could lead social networks to over-regulate expression — in particular, to delete legitimate expression, not susceptible to restriction under human rights law, as a precaution to avoid penalties.”

Proponents argue the 2020 updates are necessary to combat extremism and to protect the rights of people on the receiving end of harassment, bigotry and threats.

“We have to do more to prevent hate and slander from spreading online,” a spokesperson for Germany’s Social Democratic Party told Politico last year.

Kahn said the law has proven effective in forcing platforms to take down hateful content but can also lead to unregulated speech being censored.

“It seems to be a fairly successful model of restricting speech,” Kahn said. “The fines threatening social media companies get them to act.”

Watch Germany’s Neo-Nazis & the Far Right in its entirety below. 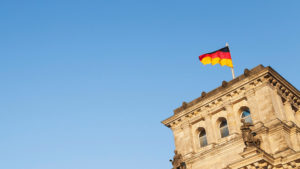