Glimpses of a Life

Many experts say the real Oswald can be discerned in his writings and statements and in the documents and files concerning him. Here is a small sampling of these, selected from the thousands of existing records.

✭ Transcripts of both radio appearances

On Aug. 17, 1963, Oswald accepted an invitation to discuss his work for the Fair Play for Cuba Committee (FPCC), a Communist, pro-Castro group. He had made the local TV news in New Orleans for distributing FPCC leaflets and getting into a confrontation with anti-Castro Cubans. In this 35-minute interview you’ll hear Oswald talking about his role as “secretary” for the New Orleans branch of FPCC, offering his views on communism and capitalism, and defending Castro’s Cuba.

Oswald’s second radio appearance, four days later, is more famous. In this one, Oswald debated Edward Butler, head of an anti-Communist propaganda organization, and Carlos Bringuier, the leader of an anti-Castro group. Butler had done some background research on Oswald and attacked him on his defection to Russia. At the end of the 20-minute debate, Oswald appeared very upset. The debate seemed to have humiliated him and ended his campaign for Castro on the streets of New Orleans.

Evaluations of the Young Lee Oswald

The Warren Commission looked into what could have shaped and molded a character capable of assassinating a president. From the Commission’s files, here are the conclusions of a pychiatrist, Dr. Renatus Hartogs, and a social worker, Evelyn Siegel, who met with the adolescent Oswald after he had been picked up for truancy in New York City and sent to a juvenile detention center for evaluation.

Oswald in the Soviet Union

The 20-year-old Lee Oswald defected to Russia in 1959 thinking that he would find there an ideal Marxist society. But he soon became disenchanted with the Soviet Union’s centralized state power and bureaucracy, as well as the contrast between ordinary Russians’ lives and the special privileges granted to Communist Party members. Here are entries from Oswald’s diary in which he describes his changed views of Soviet life after living more than two years in Minsk, his meeting Marina Prusakova (whom he would soon marry), and his decision to return to the United States.

A Note to Marina

Marina Oswald found a note on the night of April 10, 1963 — the night her husband attempted (and failed) to assassinate General Edwin Walker at his home in Dallas. (The single bullet Oswald fired at Walker was deflected by a window frame.) Walker was a virulent anti-Communist, and Oswald viewed killing him as a way to leave a mark on history. The note to Marina suggests that Oswald was reconciled to being caught or even killed in his attempt on Walker’s life.

When Oswald didn’t come home on the night of April 10, 1963, Marina went into his study — which he had told her never to enter — and found this note, written in Russian. That night Oswald had attempted to assassinate General Edwin Walker, a virulent anti-Communist. Oswald had prepared a book of operations for the plan, including photos of Walker’s house, the place where he would hide the rifle, maps, and documentation that laid out his reasons for killing Walker. Oswald viewed Walker as a potential Hitler and saw himself leaving a mark on history if he were to kill Walker.

The Walker case would not be resolved until after the Kennedy assassination, when Marina Oswald told her story and the Walker bullet was linked to Oswald’s rifle. No co-conspirators were ever identified.

2. Send the information as to what happened to me to the [Russian] Embassy and include newspaper clippings (should there be anything about me in the newspapers.) I believe the Embassy will come quickly to your assistance on learning everything.

3. I paid the house rent on the 2nd so don’t worry about it.

4. Recently I also paid for water and gas.

5. The money from work will possible be coming. The money will be sent to our post office box. Go to the bank and cash the check.

6. You can either throw out or give my clothing, etc., away. Do not keep these. however, I prefer that you hold onto my personal papers (military, civil, etc.).

7. Certain of my documents are in the small blue valise

8. the address book can be found on my talbe in the study should you need same.

9. We have friends here. The Red Cross also will help ou.

11. If I am alive and taken prisoner, the city jail is located at the end of the bridge through which we always passed on going to the city …

Here is an example (part of the Warren Commission exhibits) of Oswald’s political thinking and ideas on a future society. Written around the time of his assassination attempt on General Edwin Walker in April 1963, Oswald’s thoughts here reflect his search for what he believed would be the perfect society. He was disenchanted with the Soviet system after having experienced it first hand in 1959-1962, yet he disliked capitalism for its exploitation of the working classes.

The Backyard Photo in Dallas 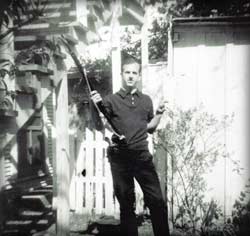 A few days after receiving .38 pistol and a cheap Italian rifle he had ordered by mail, Oswald asked his wife, Marina, to take a picture of him in the backyard of their Dallas apartment dressed all in black and posing with the two guns. The Mannlicher-Carcano rifle in his hand is the same one used to kill President Kennedy.

This photograph was one of several taken by Marina Oswald on Sunday, March 31, 1963, in the backyard of the Oswalds’ Dallas apartment. It remains among the most incriminating and controversial pieces of evidence against Lee Harvey Oswald.

When shown the photographs after the assassination, Oswald denied that he owned a rifle and denied it was him in the photos, saying that his head had been pasted on. Critics of the Warren Commission seized on this — including filmmaker Oliver Stone, whose 1991 film, JFK, suggests the photographs were faked in order to frame Oswald. (Read Stone’s comments on this photograph in a 1992 panel discussion.)

Marina Oswald testified before the Warren Commisision that she took the photographs. She identified the camera she used and the FBI was able to tie that camera — to the exclusion of all other cameras — to these photographs. Years later, the 1977-78 House Select Committee on Assassinations (HSCA) worked with a photographic panel to study all of the testimony and whether there were incongruous shadows in the photographs, as critics alleged.

Oswald had given a copy of the photograph to his friend Geroge de Mohrenschildt and on the back someone had written “Hunter of Fascists” in Russian and Oswald signed it. The House Committee’s experts concluded beyond a doubt the signature was Oswald’s. Any notion that the photo was faked by other people to frame Lee Harvey Oswald would have to explain the fact that Oswald himself signed it.

In addition, G. Robert Blakey, the HSCA’s chief counsel, explained to FRONTLINE the FBI tests conducted on the camera and the film: “There are microscopic, unique indentations. Based on them, if you have the negative and the camera, you can — just like you can match the grooves in a bullet to the grooves created by the barrel ballistics — you can match a camera and a negative or a photograph. That’s precisely the technique that the FBI employed. The details of it are set out for all to read in the Warren Commission hearings and report. We undertook a similar analysis on the committee and the photographic panels’ report is set out in our hearings as well. This is science. This is not memory, this is not perception, this is something that anybody with the expertise can replicate for themselves.” 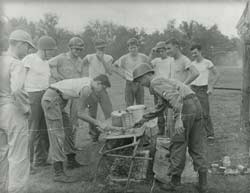 In the 1950s, David Ferrie (second from left) commanded a squadron in the New Orleans Civil Air Patrol, of which Lee Harvey Oswald (far right, rear) was a member.

Since New Orleans District Attorney Jim Garrison’s ill-fated investigation of the Kennedy assassination in the late 1960s, one of the most intriguing suspects in a possible conspiracy to kill Kennedy has been David Ferrie.

Ferrie was an eccentric New Orleans pilot who had strong ties to Cuban exile guerillas fighting against Castro. In 1963, Ferrie was hired by attorneys for Carlos Marcello, the Mafia chieftain of New Orleans. Marcello was then fighting a deportation order issued on instructions of Attorney General Robert Kennedy. Ferrie was hired to help investigate the case on Marcello’s behalf.

Marcello reportedly harbored a deep hatred for the Kennedy brothers, and there is testimony that he talked of killing the president and of hiring a “nut” to do it.

Over the years many eyewitnesses of varying degrees of credibility have stepped forward to say they saw David Ferrie and Oswald together in the summer of 1963, but there has never been any hard documentary evidence that the two men knew each other. However, in the 1950s, David Ferrie did command a New Orleans squadron of the Civil Air Patrol, a youth auxiliary of the U.S. Air Force. And in the 1950s, Lee Oswald was a cadet in the Civil Air Patrol and several of Oswald’s fellow cadets have said that Ferrie was one of Oswald’s squadron leaders.

In the research for its investigative biography of Oswald, FRONTLINE uncovered the first hard evidence linking Oswald and Ferrie — this photograph taken in 1955 at an overnight encampment of a C.A.P. search-and-rescue squadron. The photo, a group shot of several men and teenage boys around a campfire, clearly shows a young Lee Harvey Oswald on one side of the frame and David Ferrie, wearing a military helmet, on the other side.

FRONTLINE located the photographer, Chuck Frances, who says he took the picture for the C.A.P. Francis also said that when he was interviewed by the FBI, he told them Oswald and Ferrie knew each other, but he did not tell them about the photograph. The executor of Ferrie’s estate, as well as Ferrie’s godson, also picked out Ferrie.

But when FRONTLINE showed Martens the photograph, he identified Ferrie. “It does indicate the possibity of an associaton,” said Martens, “but if and to what extent is another question. Of course we’ve all been photographed with people, and we could be presented with photographs later and asked, ‘Well, do you know this person? Obviously, you must because you’ve been photographed with them.’ Well no, it’s just a photograph, and I don’t know that person. It’s just someone who happened to be in the picture.”

“As dramatic as the discovery of this photograph is after thirty years,” says Michael Sullivan, FRONTLINE executive producer for special projects, “one should be cautious in ascribing its meaning. The photograph does give much support to the eyewitnesses who say they saw Ferrie and Oswald together in the C.A.P., and it makes Ferrie’s denials that he ever knew Oswald less credible. But it does not prove that the two men were with each other in 1963, nor that they were involved in a conspiracy to kill the president.” 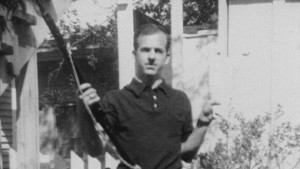 Remembering the Tiananmen Square Crackdown, and the “Tank Man”